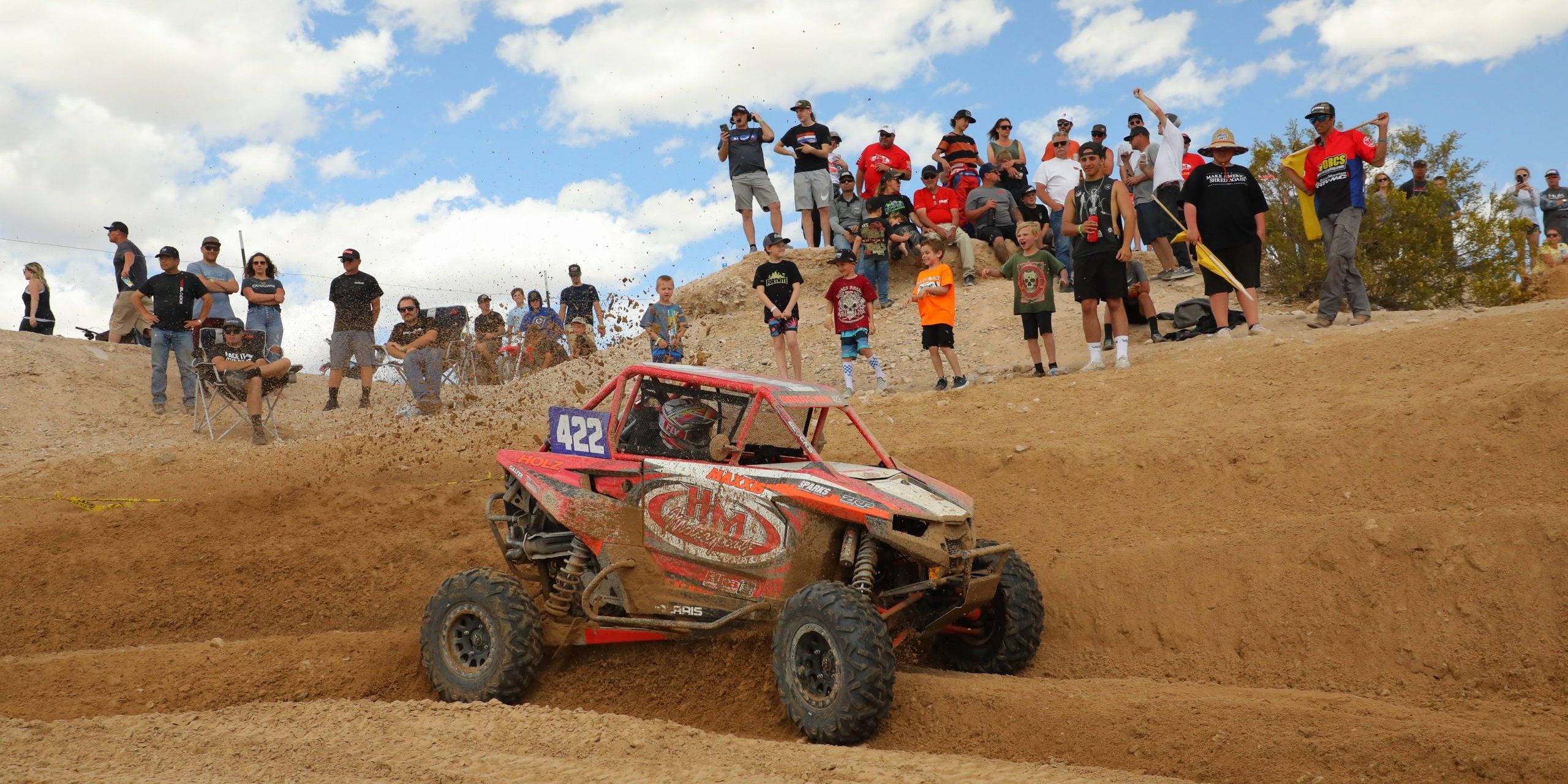 Story and Photos By: Dirt Nation 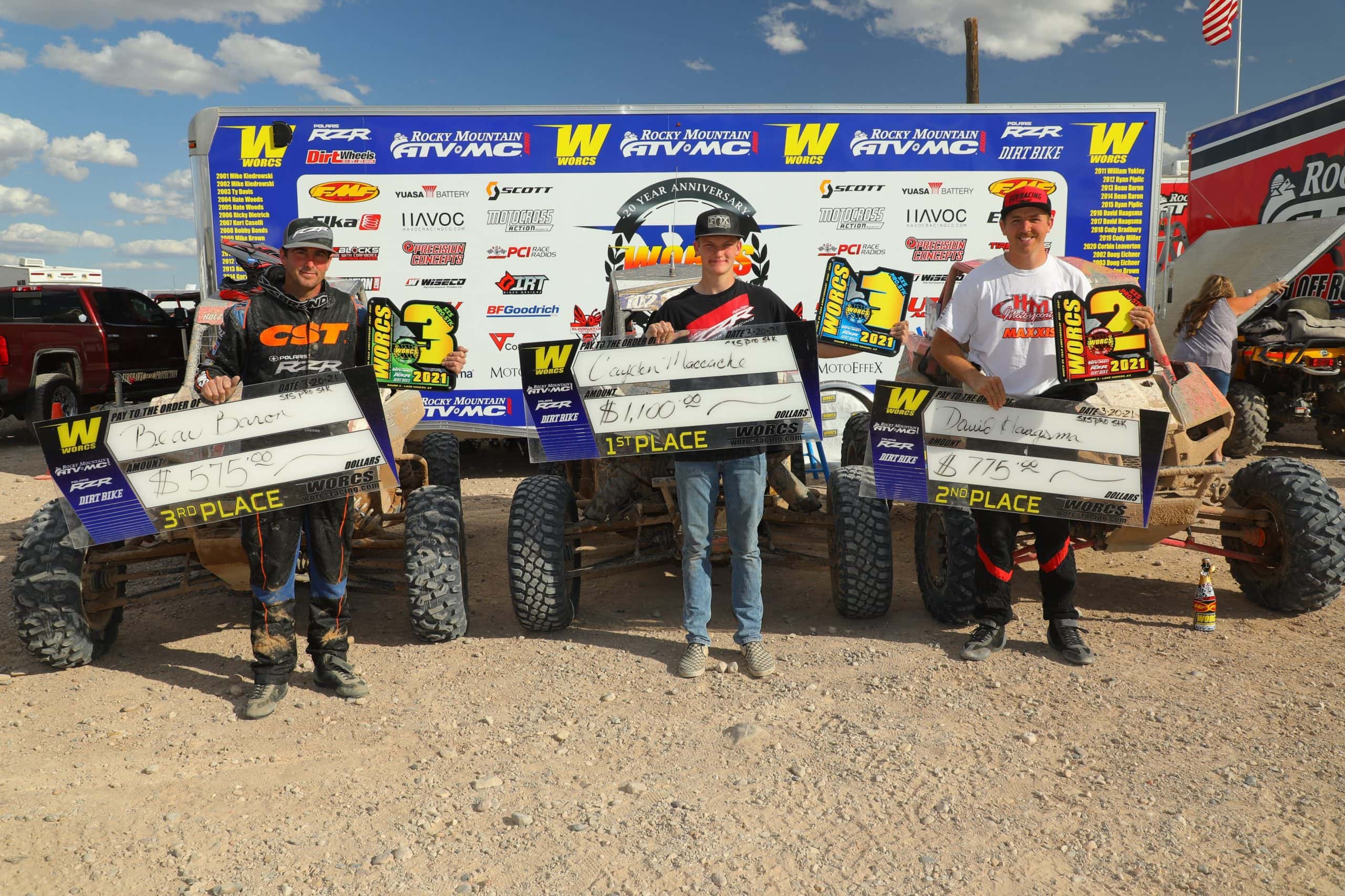 With issues surrounding the COVID 19 pandemic still playing havoc on scheduling, the ATV MC WORCS Series presented by Polaris RZR Series made its second stop at Crazy Horse Campground this season with a full card of SXS racing. The course was as rough and challenging as ever and, in the end, Beau Baron walked away with his first victory of the season in SXS Pro. Cayden Maccachren scored his second consecutive victory in SXS Pro Stock. 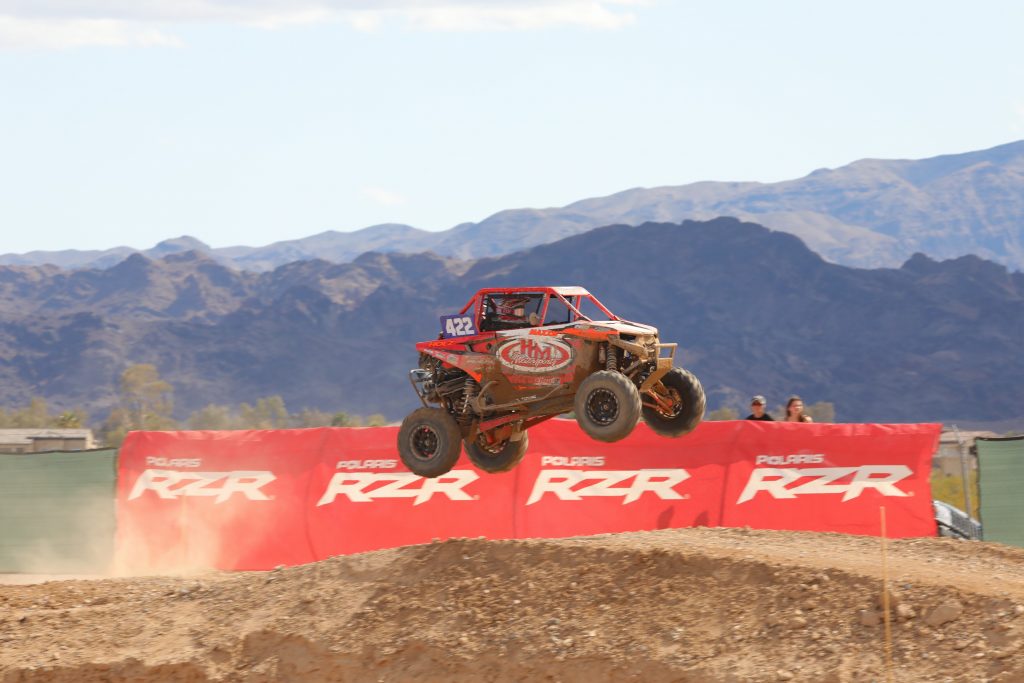 Lake Havasu is historically tough on both drivers and machines and this go-around was no different. On Saturday, the SXS Pro Stock field was running in steamy 80-degree temperatures on the track around the and across the lake. Though it cooled off on Sunday, The SXS Pro Production class had its own share of carnage with which to overcome. The Lagoon Jump, which was thoroughly overhauled earlier this year, was further refined so that drivers either had to send it over the jump, or go around in the outside lane. There would be no rolling it this time.

In SXS Pro Production, Baron brought out his Polaris RZR Turbo to a track that had been thoroughly beaten up by the previous classes. David Haagsma took the lead at the start before issues sent him back a lap. Brad Callahan then took the lead, but he broke on the final lap.

Meanwhile, Baron used his extensive experience here to his advantage. Running a somewhat conservative pace he took the lead on the final lap and scored the victory. Maccachren was second in a naturally aspirated Polaris RS1. John Bonanno was third, earning his first podium of the season in his Can-Am Maverick X3. Haagsma and Saxton rounded out to the top five, both in Polaris RZRs. “I am so happy to get this thing to the finish line,” exclaimed Baron. “This car was a work in progress so I’m so stoked to get this win. I just had to maintain on the last lap after getting roosted the whole race. My car was amazing today.” 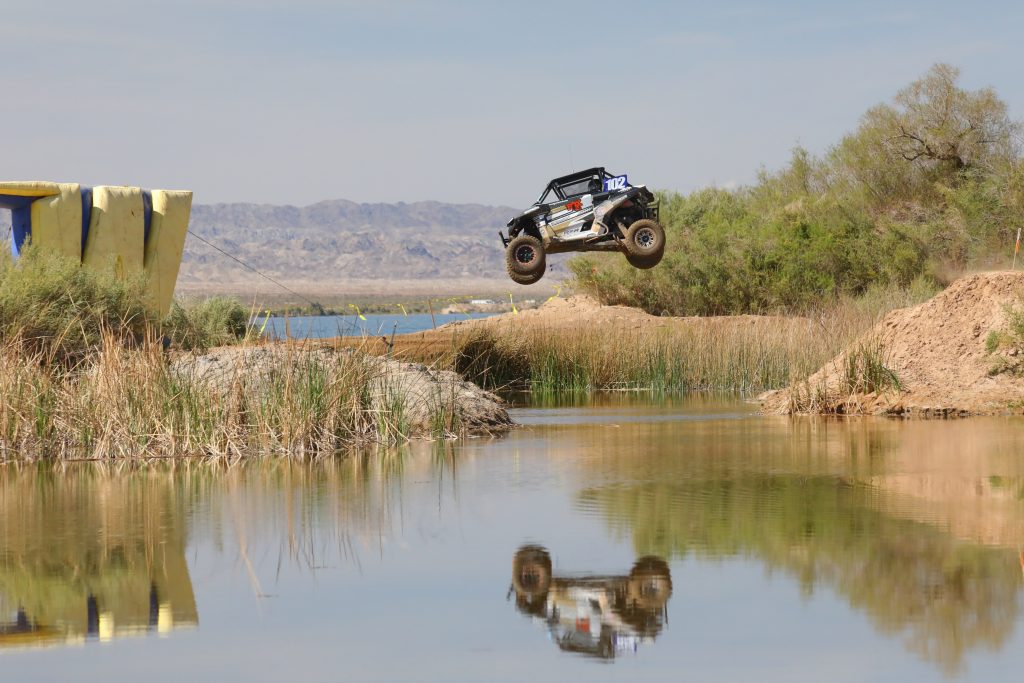 Maccachren started on the second row and was at a definite horsepower disadvantage. Driving the same car he used to win the SXS Pro Stock race on Saturday, Maccachren used the single seat ride’s nimbleness to his advantage, but it wasn’t easy. “You always want to win, but it’s hard to do when bring a spoon to a knife fight,” said Maccachren with a laugh. “Off the start, I got pinched hard and fell back. From there, I clicked off smooth and consistent laps, kept doing circles, and I made it to the finish. This race was pretty tough and I drove 110%, but while the turbo cars get you on the straights, it’s the corners that matter.”

Bonanno’s Can-Am was definitely an unhappy creature as the race pressed forward. Fighting off vibrations, he ran a slower pace to start but then picked up late. That made for a nice clean run to third place. “I just kept picking people off that were having problems,” said Bonanno. “I was experiencing weird problems so I just kept trucking. I picked up the pace at the end. Everyone else seemed to fall apart and here we are.” 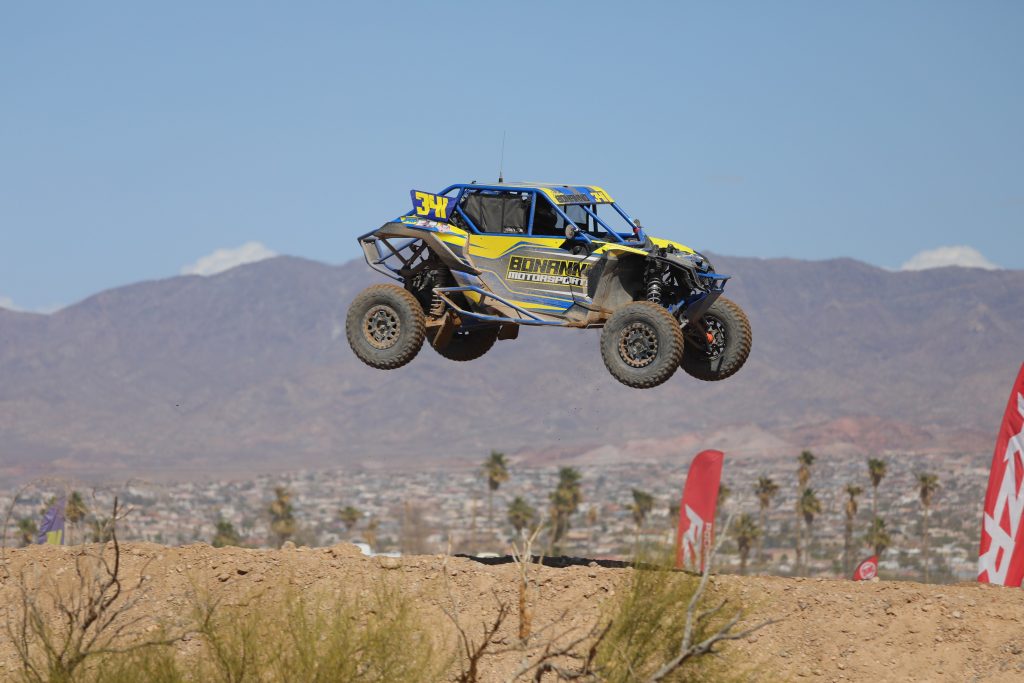 In Pro Stock, Maccachren again started on the second row, but charged from the start behind first row starters Haagsma and Baron. Though Haagsma and Baron finished first and second physically, Maccachren was right behind them at the finish and won on adjusted time. Haagsma was second, followed by Baron in the all-Polaris podium. Casey Sims and Clayton Winiecki rounded out to the top five.

“I got the holeshot and put in a steady pace,” said Maccachren. “I started picking off the guys on the front row. I was able to set a better pace than everyone else and I had a pretty good lead by lap five.” 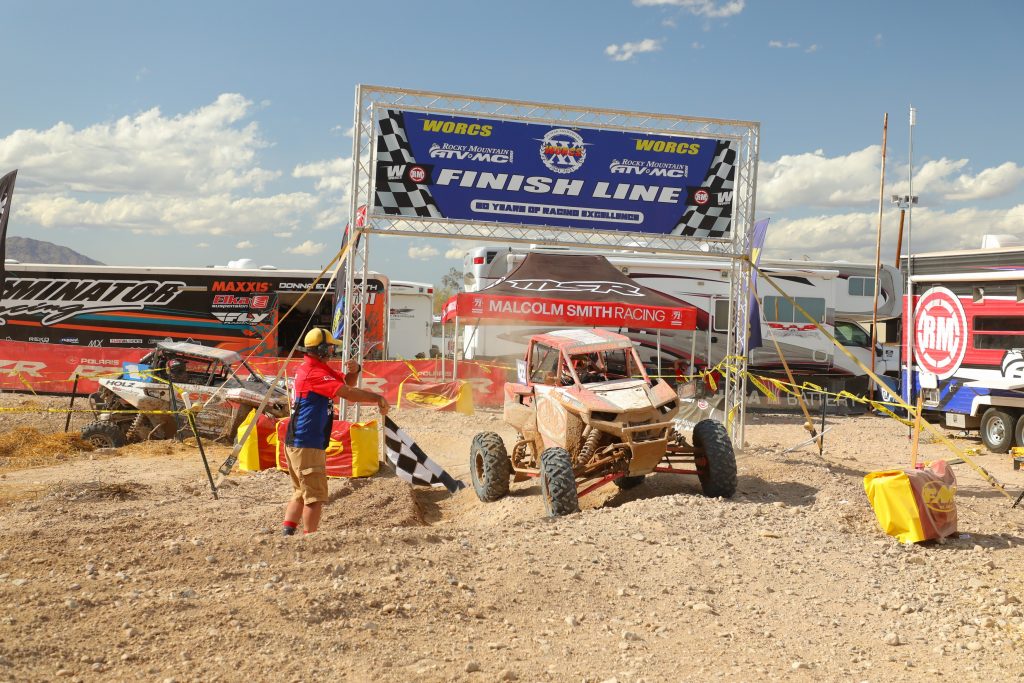 Haagsma had to overcome a braking issue sustained early in the race in his car, but still set a strong pace throughout. He took his hat off to Maccachren on the podium. Interestingly, Haagsma got back his roots here during the weekend, riding an ATV in the three-wheeler class. He launched and landed his three-wheeler on the Lagoon Jump during the race. “I know Cayden is a great driver and he will always go for it,” said Haagsma. “I could see him catching us physically. I lost my brakes early, but I finished on the podium, and we’ll be battling it out to the end for the championship.” 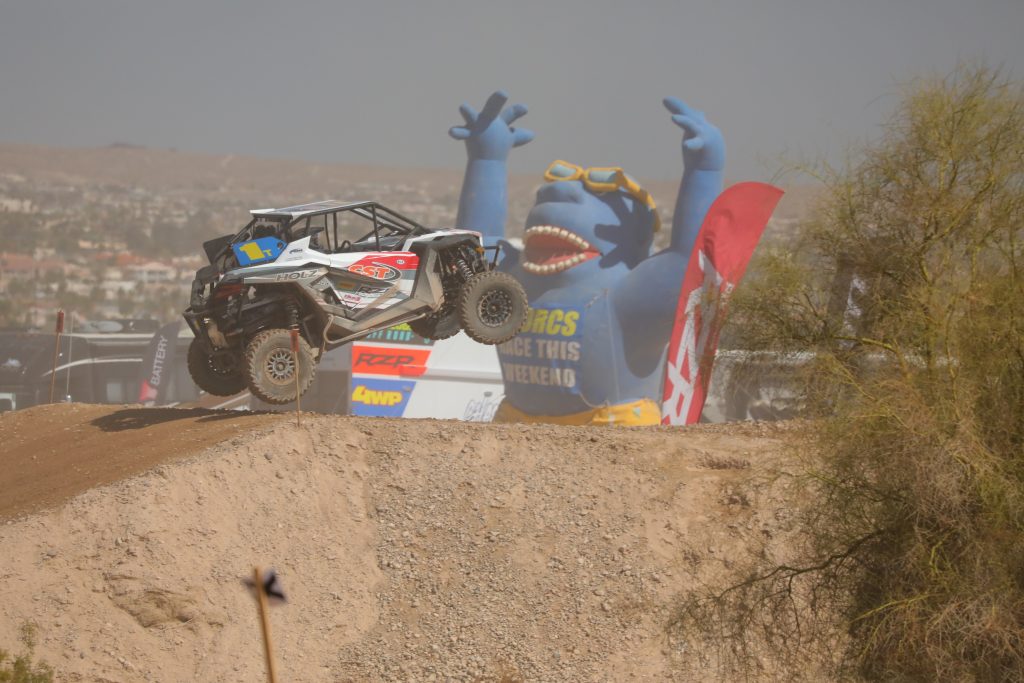 Baron was pleased with yet another podium in the class and its improvement to his points position. Baron has had a unique relationship with this track. He’s won a lot here, but he’s also left in an ambulance a few times. “The RS1 was great,” said Baron. “I thought I went too stiff on the suspension but it worked out at the end of the race. Havasu usually wrecks everyone, but going into the next round I should have some good gate picks.” 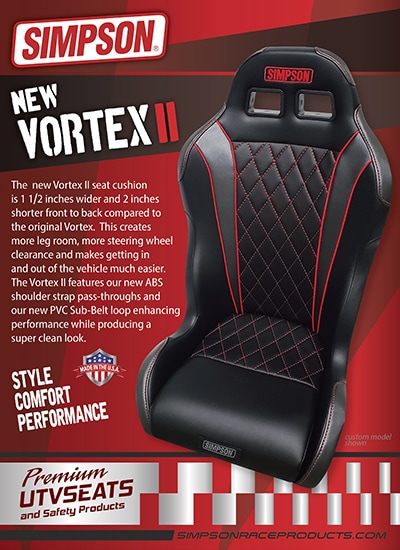 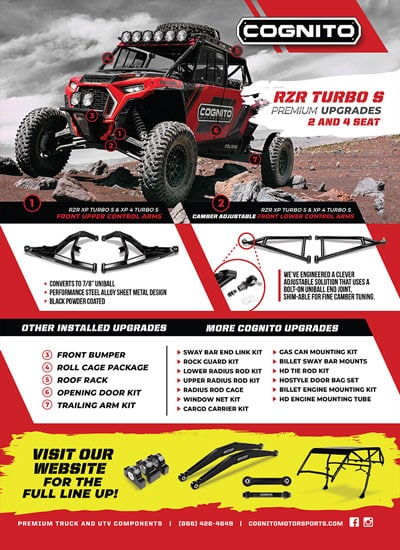 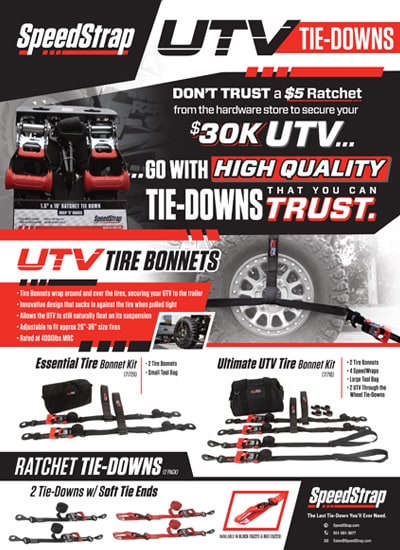 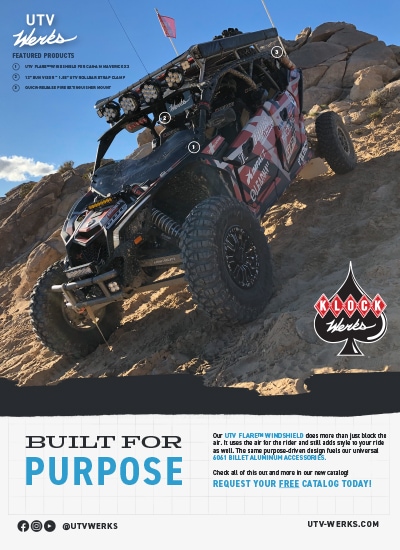