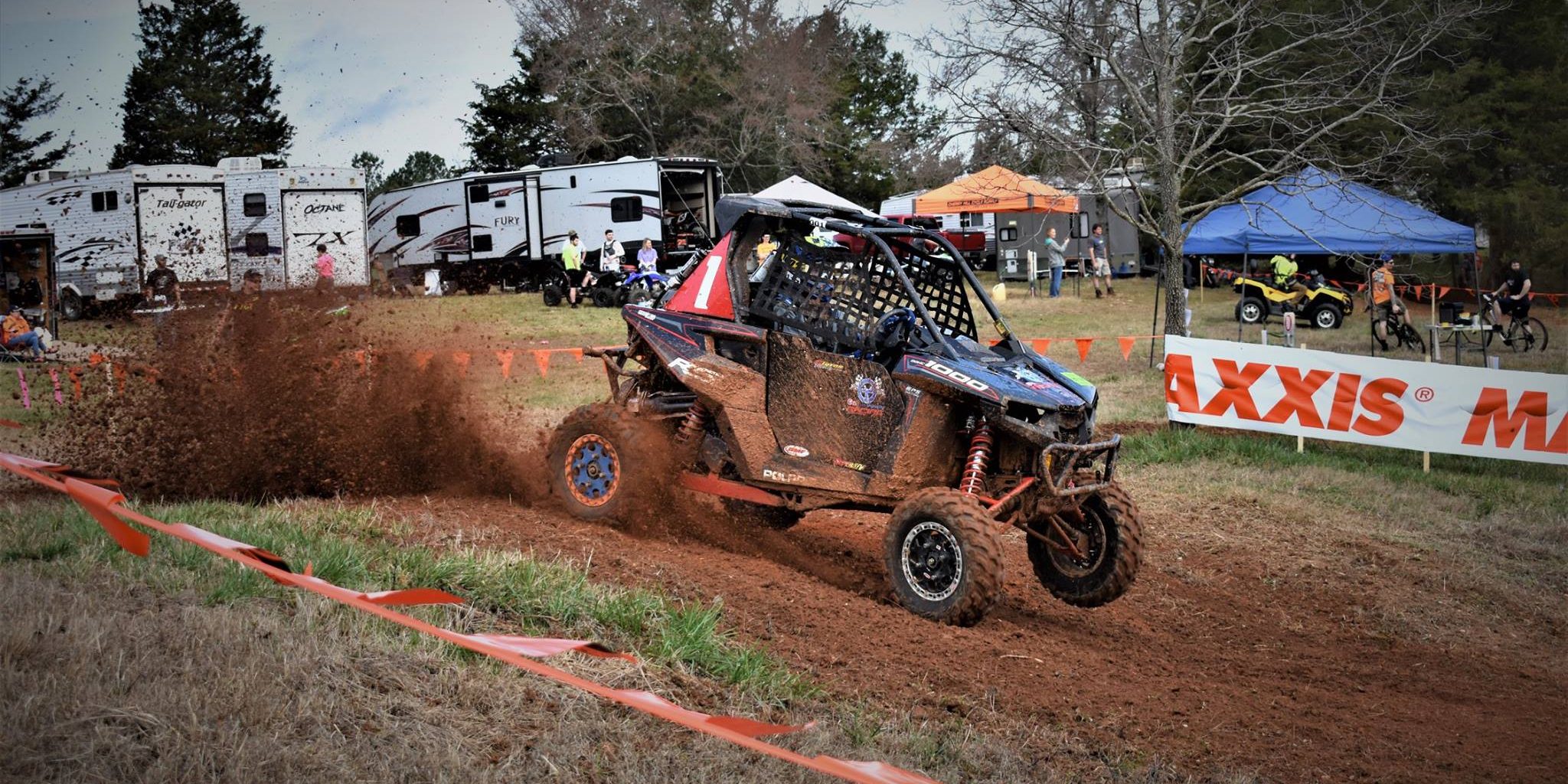 What a fantastic start to our year! Knowing we needed to keep fresh and not get dusty over the break we had hoped to practice at least once a month in the off season. Unfortunately, holidays, bad weather and a wedding had us stuck just watching videos and dreaming of racing again. The winter break was a short one as GNCC announced their opening round a full 3 weeks earlier than normal. The local series we follow has a lot of guys who compete in both series so they try really hard to follow GNCC’s schedule and terrain. With GNCC starting earlier that forced Mideast to have their opening round pretty quick too!

Our first official race was Feb 17th in Wooddruff SC (only 20 minutes from the 1st round of GNCC). It was a dreary, cold, rainy day. The conditions were not ideal but we needed the practice. Over the break, we as a team, decided to include 2 more entries into our race program. Mitch has always tried to race at least ½ of the local events but he decided he was tired of being pit guy and wanted to get back out there racing too. Emily, Alex’s wife (thus the wedding that took place over the break) decided to try her hand in the women’s class at the GNCC and do all the Mideast races as well in the Production class, as she has had 0 experience but 100% encouragement from all of us! Collin and I suited up, took our position on the front row. Mitch also signs up in the Pro class no matter the vehicle of choice and that particular day, it was a Wildcat Sport, totally stock even down to doors and seat belts! Significantly down on HP, Mitch has fun no matter what he is driving! Emily, took her spot on the 2nd row and had the idea to let everyone else take off and just fall in behind and learn the basics of driving a SXS with Alex as her co-pilot. Collin took off with a bang getting the hole shot but was quickly passed by none other than Jamie McCoy who pushed us wide in last corner of the start! Collin fell in behind Jamie and didn’t look back. Mitch was last off the line (remember now, he is way under powered) and did his best to maintain a position. Emily, having made up her mind a game plan, when the green flag dropped and she cranked her car, she noticed a few other people had the same idea so she mashed the skinny pedal and took off! Working her way through the crowd due to some good line choices she went into the woods about middle of the pack. Collin made a few mistakes which allowed Jamie to pull a gap on us. We put our heads down and charged on. By the end of the race Collin had taken the lead and was on the center of the box!! Mitch finished 5th and Emily finished 9th out of 12th in her class. It was a good day, no injuries and no broken cars. Any time you can load your cars on the trailer under their own power, it is a good day~!!

Saturday February 24th Union SC. 1st round of GNCC. We did run Big Buck last year but since this track is the closest to our home we have visited it several times in the past. As a matter of fact, in 2008 their inaugural UTV race was held here and Mitch entered with Alex (14) as his co pilot in a Yamaha Rhino. Guys you have to go watch YouTube videos of that race to see the progression of this sport. It is simply AMAZING! Good for some laughs as well. Saturday 9am its Single Seat race time. Mitch decided to race Collins championship car from last year as Collin had stepped up to the brand new, only been out 20 days, RS1. The RS1 is a single seat 1000cc on the RZR format. It is bad to the bone! Having only gotten ours a week before round 1, the only thing we had time to do was add solid doors. It was bone stock, no suspension, no tune or exhaust, nada! We wasn’t sure how many other RS1’s would be there but we knew there would be a few and we had to keep Collin competitive, we had a title to defend after all! Collin and Mitch lined up with 11 cars, 4 of which were RS1’s. Green flag drops and Collin went into the 1st corner battling for 2nd place but by the woods he had secured the spot behind a factory backed Polaris driver with a built car. Collin stayed on his behind and eventually took the lead, finishing the race in 1st place. Mitch had a very nice battle going on, he went from 3rd, 4th, 5th and at one point dropping all the way back to 8th. He battled his way back to finish 5th for the day. 4pm, its go time for what we call the Big Cars. Emily is nervous but excited. Collin and I head to the starting gate knowing how important it is to pick a perfect spot on the row you are assigned. We are on row 5, 2nd row of UXC2 Pro. When the flag drops, in true Collin fashion, he gets a great jump off the line and takes us into the woods in 1st off our row. Knowing we have some catching up to the rows in front of us, we charge on. We actually run 2 entire laps before we see anyone. As we are coming through the timing gate at the finish line we see the guys in our class who started a row in front of us. We now have a battle! The 1st guy we catch is the guy who won our class (XC3) last year so we know he is a good driver and are looking forward to passing him. Little did we know it would take us 2 and ¾ laps to get around him. He protected those corners really good but held us up significantly. When we caught him we were running 1st overall!!!!! Mitch had held the overall board out to us and I knew exactly what that meant but not wanting to freak Collin out, I just stayed silent. Finally, Collin had scouted a place to pass Matt and took it for the pass. Now time to put our heads down and see if we could make up some time we had lost! We had ran into lap traffic all day but as the day progressed those cars were harder to get out of your way. Imagine trying to race how frustrating it would be to have a horn blow at you every 30-45 seconds, you have to move out of the way or risk getting bumped. By 45 minutes I can guess you are sick of hearing horns and pulling over! But we worked our way around them and when we came through the checkered flag we knew we had maybe ran our best race EVER! We pulled in right behind Jamie McCoy under the Monster Energy tent cleaning his car for the center of the PODIUM! We were so happy for him and celebrating his victory when we were informed we had 2nd OVERALL. 2nd out of 70 cars and from row 5 in a non turbo car! To say we were ecstatic is an understatement! OTR Wheel taking 1st and 2nd on the podium, it’s a win win for everyone!!!
Emily was actually the 1st to tell us we had taken 2nd overall. Which means if she was there at the podium, she had broken out. We passed them cheering us on our 2nd lap. Emily was excited that she had passed for 3rd place in the woods. She got a little too excited, got cross rutted and smacked a tree really hard. The tree ended up breaking her A arm preventing them from finishing the race. She has a lot to learn but practice is the best way to learn. She will get better we have no doubt. Proud of Emily for taking the chance and racing the women’s class!

Saturday 3-3-18. We load up 2 cars and head to Gaston SC for round 2 of Mideast. It’s a clear sunny day but windy and cold. Mitch had picked up his very own RS1 the day before and was ready to see what he had for Collin. I don’t think the competitive spirit ever leaves a competitor but Mitch knew he had to have a competitive car and we think this new RS1 will fit him to a T. Having never broken in the belt or turned the muffler blue, he was excited to break it in at a race. Now you guys have to realize, Mitch has raced something since he was 15 years old. He started on horses, moved to dirt bikes then street bikes, back to dirt bikes then to quads and now UTV’s. One thing Mitch was always good at is the hole shot. Once Collin listened to his dad on how to get the hole shot, he has gotten in 98% of the time since! So they line up, Mitch about 4 spots down from Collin. Austin, my great nephew, had taken the co pilot seat for this race. Green flag drops and low and behold Mitch takes the hole shot from Collin and Jamie McCoy! But having pitted more than raced in the past 2 years Mitch knows where his comfort level is and realizes he is holding Collin up. He reluctantly pulls over and lets the fast field go by. Needing to learn the car, the track and his ability he continues to hone his skills lap after lap. Collin secured win #3 with Mitch getting 3rd in class. Emily was sick on Saturday and sadly had to miss this race and chance to practice.

I realize this is a very long race report and after this round of GNCC racing in Florida where I only have 1 race to update you guys on, it should be shorter. Thanks again for everything you do to support us. You don’t know how much it means to have you guys be our 1st and biggest sponsor. To have someone believe in you before anyone else is priceless. Thank you from the bottom of our hearts!

Check out the in-car from Collin Truett at the 2018 GNCC Big Buck Single Seat race in his brand new Polaris RS1. Woods racing definitely looks like a blast!