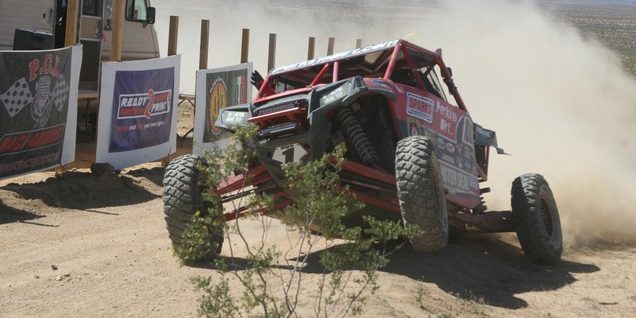 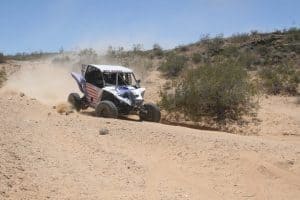 California City, CA – April 29, 2017 – The Understatement of the year would be to say, “it was a rough race,” as second overall and 1st place Pro Turbo pilot, Bradley Howe (UTV Driver, Alpine Stars, ITP, Baja Designs), said as he was given the checkered flag when he crossed the finish with six laps completed and physically in first place.

However, and this was a big however, the team of Kent Perkins (Polaris – Sparks Racing, Pro Moto Tires, Monster Seal, OMF, Cognito Motorsports, Perkins Dirt) and Navigator Abel Perez, crept, strolled, slid, skated, raked and barely zig-zagged across the finish line to finish, in corrected time, just ahead the Bradley Team with :01:16 minute advantage to the good. It was as dramatic a finish of any race as you want to have, seeing the winning car, come across (barely) the finish line on three wheels and plowing for the last three miles with the whole rear tire and wheel assembly just dangling in the wind and dust. Applause and oohs and aahs were ample at the finish as applause broke out in unison.

At the finish, Kent Perkins and Abel Perez admitted that, “We were like three miles from the finish, ready to make the U turn and get back to the finish when we felt the car dip to the tight. We looked at each other, knowing that we had amassed a pretty good lead (on the last lap they had approximately a 10 minute lead-Editor), but we didn’t want to chance it by stopping to make repairs. It would have taken us at least 20 to 30 minutes if we could do it at all.” The team, seeing the finish line at a distance, just above eye level, decided to “go for it!” and as such, they zig-zagged across the desert, trying to stay on course, so as to not get penalized, but just to get to the finish. One problem: With the right rear gone, the #1000 car looked like it was doing a permanent wheelie. Problem #2: The driver’s side of the compartment was high enough so that driver, Kent Perkins, could not see the road. He depended entirely on Navigator, Abel to tell him which way to go. 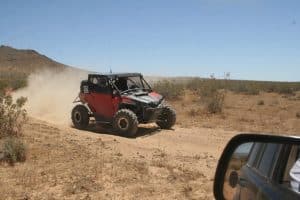 After looking at the tracking units (post-race), indeed the last three-miles shown on their tracking map, looked like perhaps a drunken sailor could have been driving the car. They plowed back and forth but always tried to stay close to the track. After all they are allowed to “drift” 25-feet from the center of the race course. They certainly used all 25 feet.

With about 1/8 of a mile to the finish, Bradley Howe on his Polaris Turbo got around Perkins and indeed took the checkered flag first. However, all eyes were on the #1000 as it was seen prancing through the desert getting ever closer in a constant cloud of dust.

Finally they got into the start/finish pits, and it was a good thing that the Red Bull Arches, usually used to determine the start/finish and scoring spot, were pulled down due to high winds early in the morning, or they would have probably taken it down with them.

Rounding out the top three overall was the team of Justin Spencer and Navigator Jathan Cox aboard a Rotax-engine powered Can-Am X3 (Recycled Precision, Can-AM, Rotax), finishing in a time of 5:25:22 hrs. 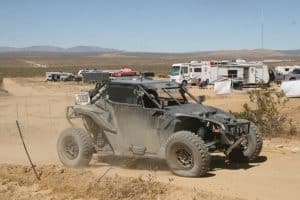 Jonmark Richardson (our handicapped Vet and outstanding racer, Can-Am X3 – AFI Motorsports, Vallhala Group), only managed to complete five laps out of the six, but that was still good enough to finish First in the BONE STOCK Class…yes, let that sink-in again: First in the Bone Stock Class and 4th Overall. Hell of a great drive. Jonmark and Navigator, Jeremj Zebrowski, were delighted at the finish, but also they were well spent. It took them a while to enjoy their accomplishment.

Needed to talk a little bit about the course with promoter, Lou Peralta. When asked at the end of the race if he thought he had laid out an almost “too-tough” race course for the group, he quickly responded with a, “I don’t think so! We have a plethora of race courses that we use every year. Some courses we don’t even use for three or four years. I’m sure that most of the racers would like to forget some courses. But that’s what racing is all about; especially off-road racing. To be perfectly honest, as a racer myself, I never lay out a race course that I haven’t had to deal with in my racing career. If anyone wants to hear it, every rough spot on today’s course I can tell them exactly where I ran something similar in Baja or even in the States. No, I think it was rough and we told them so before the start and pre-runs but I also think that they will file this one in their books and call upon it in the future.”

Not to delve too long on the subject but Peralta was asked that the toughness of the course may have cost on the number of entries that started, after last weekend’s pre-run. Peralta answered: “It is what it is.”

For someone who has been promoting races of all types since 1986, you kind of feel that he knows that the challenge is just not the course but it is with each participant’s self-awareness, and he loves it!

The next event is a major switch for AVE/BP Racing, as the PURE “100” – “IT’S TWILITE TIME, – RACE #4” takes on the summer heat with a 6 p.m. start. Half of the race is in daylight and the other half most likely into the dark. The date is Saturday, June 24 and pre-running begins one weekend before, for those who have pre-registered and received the GPS-based course.

It’s anticipated that a Big Midnight Party will follow the race. Like race director, Alan Bells says, “If you are going to stay up that late, then we might as well party!”