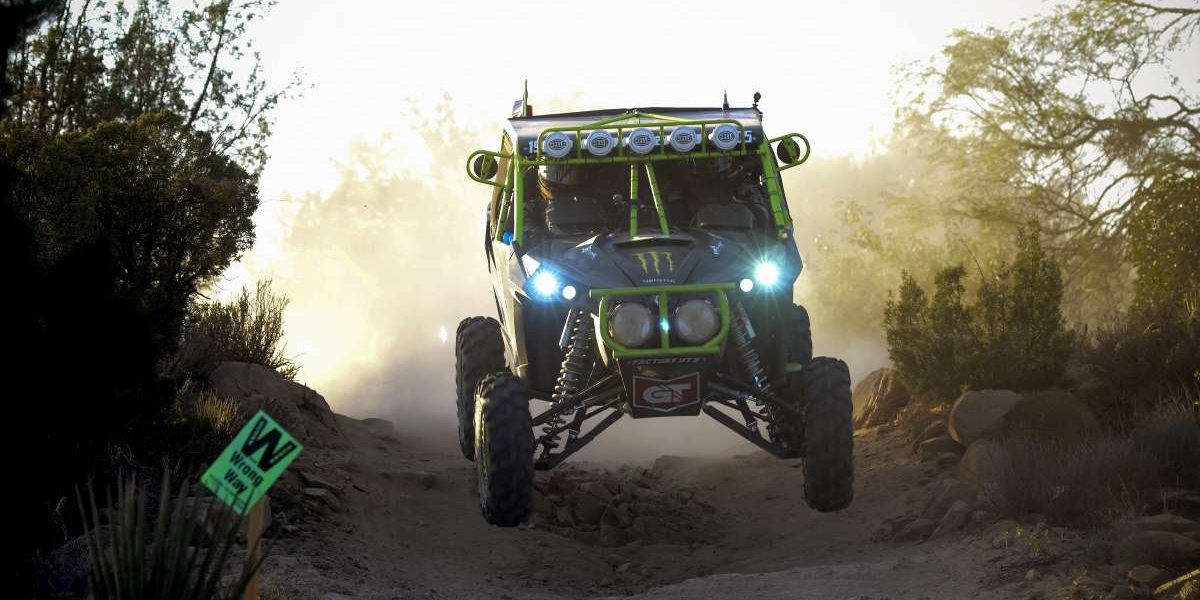 This year’s Baja 1000 was a true challenge. The course was 1,275 miles of pure hell. We were still working on the car the night before the race. We had been super busy with other things so we ended up working on the car last minute, once again. This ended up putting a toll on me. Because I was Ironmaning the race, I needed all the rest and sleep I could get. Of course, this did not happen. As the morning of race day rolled around, I only got a few hours of sleep before I started the race.

We Saw Some Crazy Things Out On The Course. 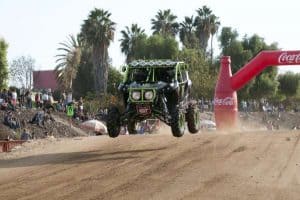 We proceeded to the starting line thinking that our start time was at 2:04 p.m. when in actuality we were pushed back to 2:42 p.m. The new start made it interesting since it gets dark earlier, and I love racing in the dark.

We finally started the race and, within a few miles, I had already passed a few of my competitors. I was really focused, determined and on a mission trying my hardest to be in the front lead before we hit Valley T (Valle de la Trinidad).

We were only driving at 80%. As we got to mile marker 50 we passed more of our competition. At approximately the 100 mile marker, we lost power on lights and accessories. We had to pull over and check our extra alternator. We also realized that the lower pulley was loose and we couldn’t do anything about it without a welder. So we had to drive with the stock lights all the way from mile marker 106 to approximately mile marker 170 where one of our chase trucks was waiting.

I was not a happy camper being that I had to drive with no lights from Valley T to the coast. When we got there our crew was ready to start working on the car. It took them a little longer than expected but we wanted to make sure the car was good to go since we were behind by about an hour at this point in the race.

From this point on, we pushed to get back in the lead hoping to be in the top three positions. We saw some crazy things out in the course; cars flipped over and stuck in rain ditches. By the time we reached the 400 mile marker everything was running great and we were back in the top five, if not the top three. We decided to do a scheduled pit stop to change the belt.

This was the first time we had made it 431 miles on one belt. This was only possible because Adam from Airdam flew down to dial-in our clutch. Adam is a master at dialing-in clutches and my hat goes off to this guy. Thanks again Adam for all your help. After we changed the belt it was time to get going again. These belts changes in the Can-Am take a little longer to change versus the Polaris. 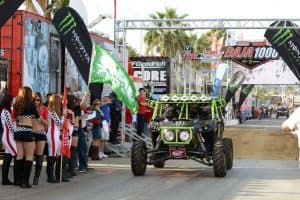 Once again, we were on the way and we put the hammer down. We were passing our competition one by one, making up time. When my team was telling us we were in the top three, then second, I knew that we just needed to stay focus and consistent until the 900 mile marker.

When we got close to San Ignacio, we found out we were in first place. At this point we decided to switch co-drivers, so my first co-driver got out of the car and my second co-driver got in. From this point on we had problems with navigating the course, as well as the rear break line coming loose due to hitting a rock in a silt bed. To make matters worse we also broke a belt.

While we were on the side of the road waiting for our belt to be fixed, we saw the Jagged X team go past us. So we got back into the car and start going once again, attempting to make up more time. The problem was that we only had front brakes, and they weren’t very good. By the time we reached Loreto we changed the belt again to make sure it was fresh, as well as try and make up time at the end of the race. While we were in the pit we noticed the sway bar was broken, as well. So we decided to remove the sway bar.

Until We Had To Stop, Because We Lost The Brakes

By this time, we were losing minutes to the leaders. I still felt pretty fresh since I was Ironmaning the race. At this point, my first co-driver was supposed to jump back in the car, but unfortunately he did not make it to the exchange point. I had to leave and try to push to get back into the top two positions. As soon as we left, we had a battle going with a car. We did not know what kind of car it was until we had to stop, because I lost all the brakes in the car. 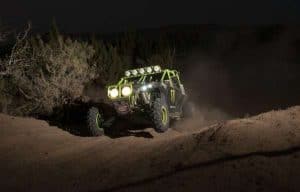 At this point we were approx. at mile marker 1005. Now we had to completely milk it to the next Baja pit. We had zero brakes and when we got to Baja pits we had to creep into the pits because we had no brakes. The Baja pit people didn’t know what to do but thankfully one of my crew guys, Jose, got a pair of vise-grips and closed off one of the brake lines to the right caliper. The front brake caliber broke in half and we also had to bleed the brakes. For the time being, we only had one brake caliper working. The brakes felt pretty hard and didn’t work very well but they got the job done.

We were now running in third place. By the time we reached the 1100 mile marker we had a very big silt bed to go through. When I reached the silt bed, I didn’t realize how deep it was. The silt was very deep and had cactus on both sides so it took us about five minutes to get out. While we were sitting on the side of the course putting our ramps back on the car, Cory Sappington passed us. At this point, I tried going after him but I told myself the risk was not worth it because of our brakes.

We got to approximately the 1,210 mile marker, after the whoops, when the lower rear driver’s side arm broke, right where it was welded. We were in the middle of nowhere trying to think what we can do to fix it.

Sitting On The Course Made Me Physically Sick

The time sitting on the course made me physically sick because by this time I had been in the car approximately 35 hours. That’s when unexpected help arrived. This family, a young man, his sister and their father came over to see if we needed anything. They helped us with food, water and whatever we needed. The kids name’s were Rodolfo and Carolina. 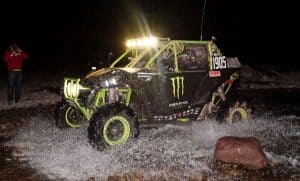 My crew could not find the way to get into this area, they tried for hours. We were approximately 15 miles from the highway so my new friends and their father went looking for my pit crew. We were stuck there for approximately 4 hours. Finally, our pit chief Reid made his way to us because of the generosity of this family.

We finally got the car up and running and we babied it all the way to the finish. I was definitely feeling the burn coming into the finish. A lot of people said there was no way I could Ironman this race and boy did I prove so many people wrong. When we finally got to the finish line, Roger Norman, Dick and a few other people were rooting us on because they knew that I had ironmaned the race and had just won the 2014 Championship. It was very nice to see my race team manager Jeff, from Can-Am at the finish line. This meant a lot to me.

This season is dedicated to a very special lady, my grandmother, who passed away 11 months ago. I couldn’t have done it without her. Even though she is not here with us, she is in mind and spirit.

I also want to thank Robby Gordon for flying me down and taking care of me at this year’s Baja 1000.