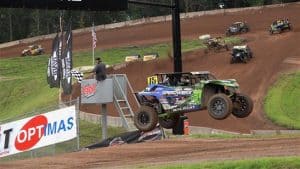 The Speedwerx/Tralo Motorsports/Arctic Cat short course team had another strong performance with two class wins and a podium finish in Rounds 5 and 6 of the Championship Off-Road season for the ERX Off-Road National this past weekend. The team had five Wildcat XXs competing in the event: Jeremy Houle No. 54 and Rookie Pro Jack LeTourneau No. 97 in the Pro Stock class, and Sportsman class rookies Mike LeTourneau No. 99, Jake Jorgenson No. 11, and Jonny Hentges No. 15. The mid-afternoon 10-lap, 32-car Sportsman UTV class had Hentges starting fourth, Mike LeTourneau fifth and Jorgenson 11th with the 12-car invert. Hentges swept into the lead partway through lap 2 while LeTourneau and Jorgenson were battling for position. When the competition caution flew at halfway, it was Hentges leading with LeTourneau in fourth and Jorgenson in 10th. Back under green, Hentges took off out front and LeTourneau made a good move into second only to lose it a short time later when the right front wheel broke, ending his race. Hentges would be unchallenged to the finish, taking his second straight win in convincing fashion. Jorgenson struggled with a mechanical issue for most of the race and finished 13th. 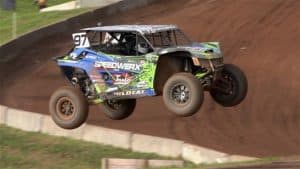 The first Pro class main event to hit the track was the action-packed 12-lap, 22-car Pro Stock SXS race. Everyone was jockeying for position after the initial start and Houle crossed the line on lap 1 in third with Jack LeTourneau right behind him. The second-place car had a flat, briefly holding Houle up and allowing LeTourneau to move into second. The two battled back-and-forth with Houle getting back around LeTourneau on lap 5. Houle was right on the leader’s back bumper when they reached the competition caution at the halfway point. On the restart, he made a move inside turn one for the lead with LeTourneau following into second. The two Wildcat XXs ran nose-to-tail in first and second for three more laps, but Houle blew a belt in the split lane and LeTourneau had nowhere to go which hung him up. That allowed two cars to get by LeTourneau before they came back around to the yellow flag so Houle’s car could get off the track. LeTourneau raced hard and got back to second place but ran out of time to regain the lead. 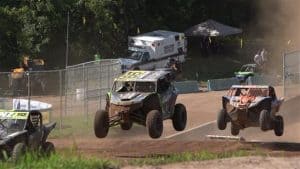 On Sunday, the 10-lap, 32-car Sportsman SXS race had Hentges starting eighth, Jorgenson ninth and Mike LeTourneau 13th.On Lap 1, Hentges and Jorgenson quickly moved into fourth and fifth, but just after they crossed the line to start lap 2, the third-place car came down into Hentges and came to a stop on the track. Hentges was charged with the yellow and sent to the rear, moving Jorgenson into third, while LeTourneau restarted 15th. When the competition caution flew on lap 5, Jorgenson was sitting in third after battling hard for second. LeTourneau was up to 11th and Hentges was struggling towards the rear with a severely bent tie rod from the earlier incident. Coming to the line to begin lap 7, Jorgenson’s left rear wheel broke, forcing him to the hot pit under yellow. They would restart for a one-lap dash to the finish due to time with LeTourneau in 10th and Jorgenson at the rear. LeTourneau picked off a few more cars to finish a very respectable sixth, Jorgenson drove back up to 17th, and Hentges was credited with 28th. 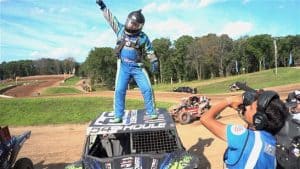 The 12-lap, 20-car Pro Stock SXS saw Houle get off to a great start and set sail out front, while Jack LeTourneau settled into sixth after a restart on lap 1. LeTourneau took advantage of a lap 3 restart, driving into third. Houle made one small mistake on lap 4 that allowed the second-place driver to briefly pass him, but he turned back underneath him to regain the lead. Unfortunately, LeTourneau would pull off while running in third onlap 6 due to a broken belt. just before they began lap 7, the yellow flag came out to clear a broken car off the track. Officials then made the call to go one more lap due to time, and Houle got a great restart and jumped out to a good lead. He never looked back and took the checkers, officially leading every lap from start to finish. LeTourneau would be scored 18th, two laps down. 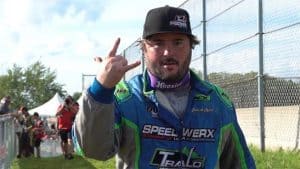 Overall, it was a good weekend despite some bad luck, and the team will be working hard to finish out the season strong at the two remaining events. In the season point battles, Houle and Jack LeTourneau are sitting fifth and sixth in Pro Stock; and Jorgenson is fourth, Hentges 10th and Mike LeTourneau 11th in Sportsman.

Up next is the fourth stop of the Championship Off-Road series at the famed Crandon International Off-Road Raceway in Crandon, Wisconsin, on September 4-5. The races will be broadcast with a free livestream on Friday and Saturday at https://champoffroad.com/livestream/.

Check out the Speedwerx YouTube page for a highlight reel from the race. The entire livestream broadcast from ERX also can be seen at https://champoffroad.com/on-demand/.