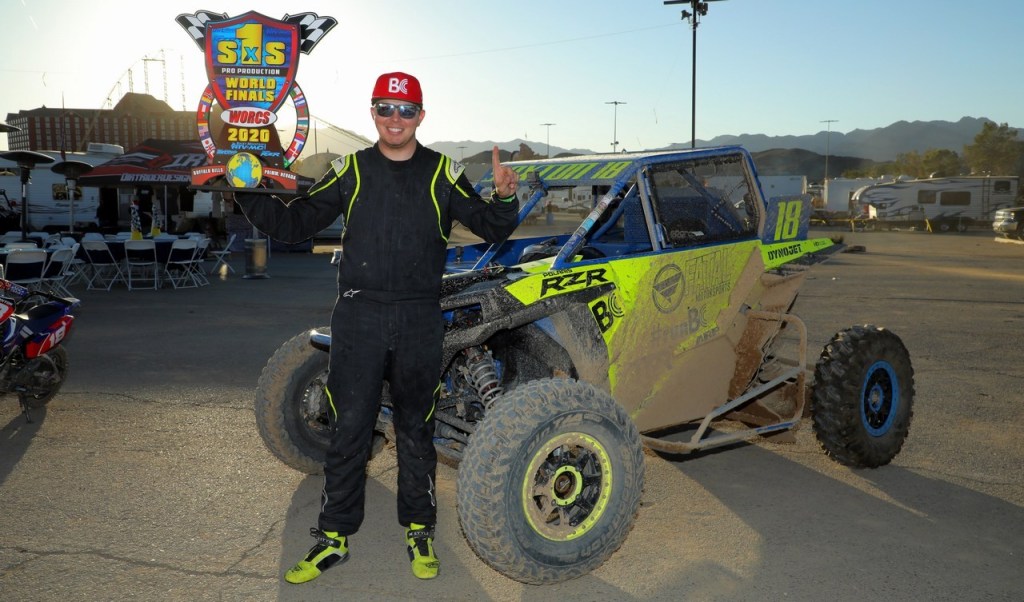 The two-day, doubleheader event was split into two distinct disciplines in the two SXS Pro classes. Competitors in both classes had to compete in a 14-lap short course race with a halfway competition caution, followed by an five-lap race on the desert course.

In SXS Pro Production short course, Chaney came out to compete in his first WORCS race while he was testing nearby for the upcoming King of the Hammers. He drove his Cam-Am Maverick X3 to the lead early. Anderson crashed, putting Shawn Saxton on Chaney’s rear bumper at the halfway caution. Chaney just held off Saxton on the restart and went on to record the victory. Saxton was second, ahead of Beau Judge.

“I qualified well and that got me out front early,” said Chaney. “Then Ronnie wrecked and that gave me a good cushion. Saxton was right on me halfway in and we went around the right hander and I just cleared him. This was one of my first times on a WORCS track and it’s really tight out there.” 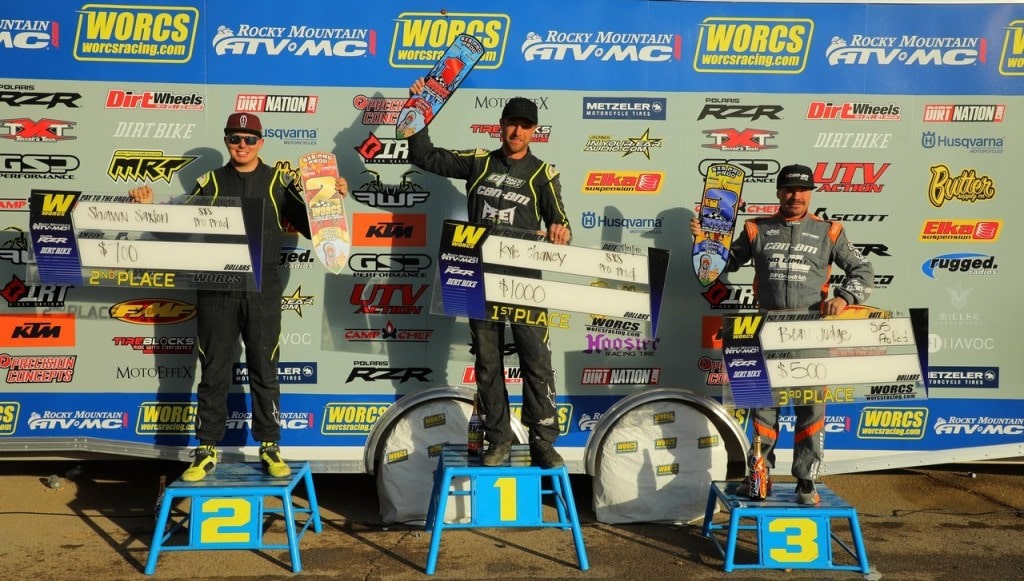 Saxton, who has come on strong in his Polaris RZR since making serious midseason changes to his program, took second when Anderson crashed and was all over Chaney during the restart. Choosing an outside line, he nearly made it stick, but had to be satisifed with second. “I was saving it for the restart,” said Saxton. “The green flag waved and went outside of Kyle Chaney. I tried to make it stick through the whoops but couldn’t pass him. The Polaris RZR just worked awesome today.”

Judge started sixth in his Can-Am Maverick X3 and was making his way through the field, but he lost several positions when Anderson crashed and he had to take evasive action into the infield. Rebounding on the restart, he made it past David Haagsma to take the final spot on the box. “When Ronnie flipped, I lost a couple of positions,” said Judge. “As soon as we had the restart after the competition caution, I got Haagsma and I did what I could do. Overall it was a good race.”

In the SXS Pro Production Desert race, Anderson was looking for redemption in his Polaris RZR and he found it quickly. After starting on the second row, he ran in the top three all race and won on adjusted time. Saxton was second, ahead of Baron.

“I threw it away yesterday, so it’s good to rebound today with a win,” said Anderson. “We were within seconds the whole time. I gave it everything on the last lap and got it by just a few seconds.”

Saxton snagged the holeshot and ran first throughout the entire race. After battling with Baron in the truck section, he picked up his pace and made it to second after finishing first physically. “I thought I was setting a good pace but then I got into with Beau on the truck track so I turned it up,” said Saxton. “On the second-to-last lap, I lost front wheel drive and then I lost a tire. I hung onto it as much as I could.”

Baron was caught behind Saxton throughout the event. Although he could catch him with his Polaris RZR going into the turns, Saxton out-horsepowered him on the straightaways. At one point the two even locked bumpers, but thankfully got unhooked. “Any time I got into a corner I’d catch him but once he got onto the straightaways he would just gap out,” explained Baron. “I did the best I could and tried to get around him a few times and I actually linked up with him on the truck track.”

All the while, Leaverton was biding his time in his Polaris XP Pro, turning laps, and looking toward the championship. Leaverton finished fifth and sixth in the short course and desert races, respectively, and clinched the SXS Pro Production Championship, his second title in two years, after winning Pro Stock in 2019. Leaverton won four races this season to accomplish the task.

“I was taking no chances,” said Leaverton. “Cruising around was pretty painful so I ran a fast lap on the final lap. It’s been such a long year especially with COVID. This season started in January and it’s November now so it’s been a long road to get to this point. I am so thankful to get this thing done. We really didn’t know how we were going to stack up in this class, but after the first round I won. It was game on from there and it’s been such a solid ride for us.”

In SXS Pro Stock, Ronnie Anderson ran a perfect two races. In the short course event, he battled with Nic Granlund during the entire race, but held the crafty veteran off to secure the victory. Granlund was second, ahead of newcomer Koen Crawford.

“It feels good to be up on the top of the box,” said Anderson. “Nic and had a great battle the whole race. He pressured me the whole time. The Pro Stock field was really killing it today.”

Granlund drove his familiar Yamaha YXZ 1000R during the weekend after taking nearly a year off to heal from a double knee replacement. Despite the obvious handicap, he was fast all weekend and scored a podium to top off his successful recovery.

“I was on crutches for 10 and a half months so it took some time to get used to the car and my body back in driving shape,” said Granlund. “My car worked really well. About three laps to go I lost power steering, but I really wanted to push Ronnie to the finish.”

Crawford missed the setup slightly and didn’t account for the blue groove that showed up early on the track. He soldiered through and scored his first ever WORCS Pro podium in a Yamaha YXZ 1000R. “The track went a little blue groove but overall, it was a fun race,” said Crawford. “This was good momentum going into the desert race. We’ve worked so hard to get to where we are right now.”

In the SXS Pro Stock desert event, Anderson had to work hard to get another win. After what he described as a “horrible” start, Anderson came out on top of a four-car battle on the first lap to take the lead. He led every lap from there, beating out Cole Keatts and Baron.

“The track was super rough in the off-road sections,” said Anderson,” but I love the two-moto format and I think it brought out the best in everyone.” 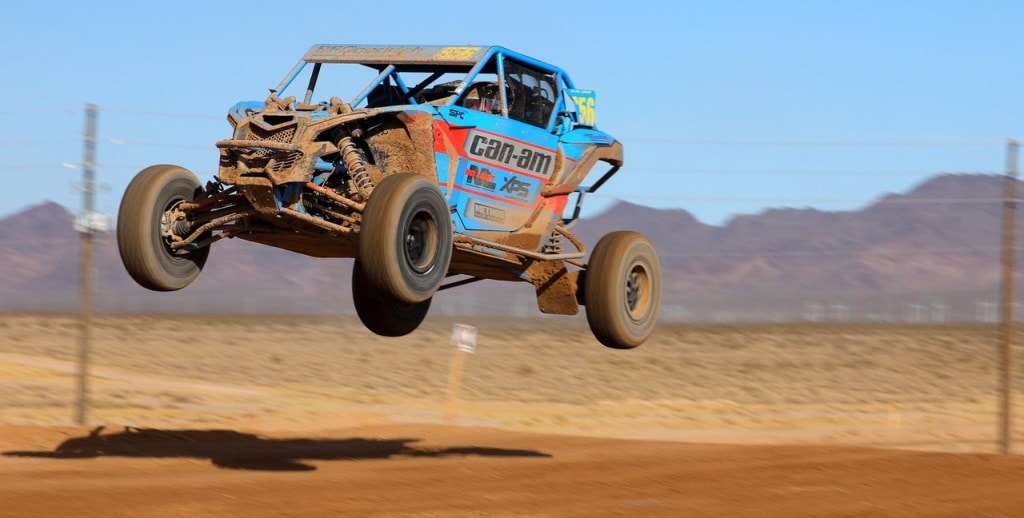 Keatts is a short course racer at heart, but after blowing the start during the short course race, he decided he didn’t want to leave Primm empty handed in his Polaris RZR RS1. He passed Baron late in the race and pushed Anderson hard to the finish. It marked Keatts first WORCS Pro podium. “Usually, I’m not too good on the desert sections, but I made a bonehead move in short course yesterday so I had to redeem myself,” explained Keatts. “I ran behind Beau and tried to set the same pace as him. I saw Ronnie a ways ahead and Beau let me by. Then I just tried to push to the end.”

Baron scored his fourth Pro Stock podium of the season with the third-place finish. Despite trying to run conservatively to preserve the title, Baron still ran a competitive weekend that ended with the championship. It marked Baron’s fifth SXS Pro championship and his third in SXS Pro Stock.

“It’s been gnarly this year,” said Baron. “We’ve had a lot of competition for the championship all year and I’m just pumped to come out on top. I can’t express how happy I am. No one else can say that they have five WORCS Pro SXS championships so this is huge. I was just trying to be as safe as I could today.”

The WORCS Series concludes the 2020 season December 4-6 with its Motorcycle and ATV class season finale in Lake Havasu City, AZ. 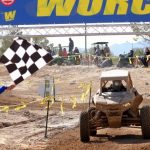 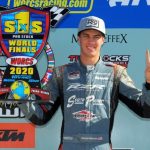 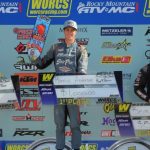 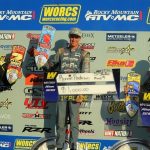 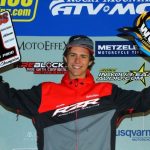 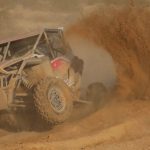 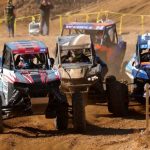 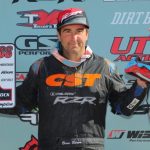 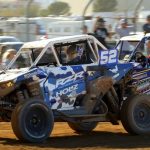