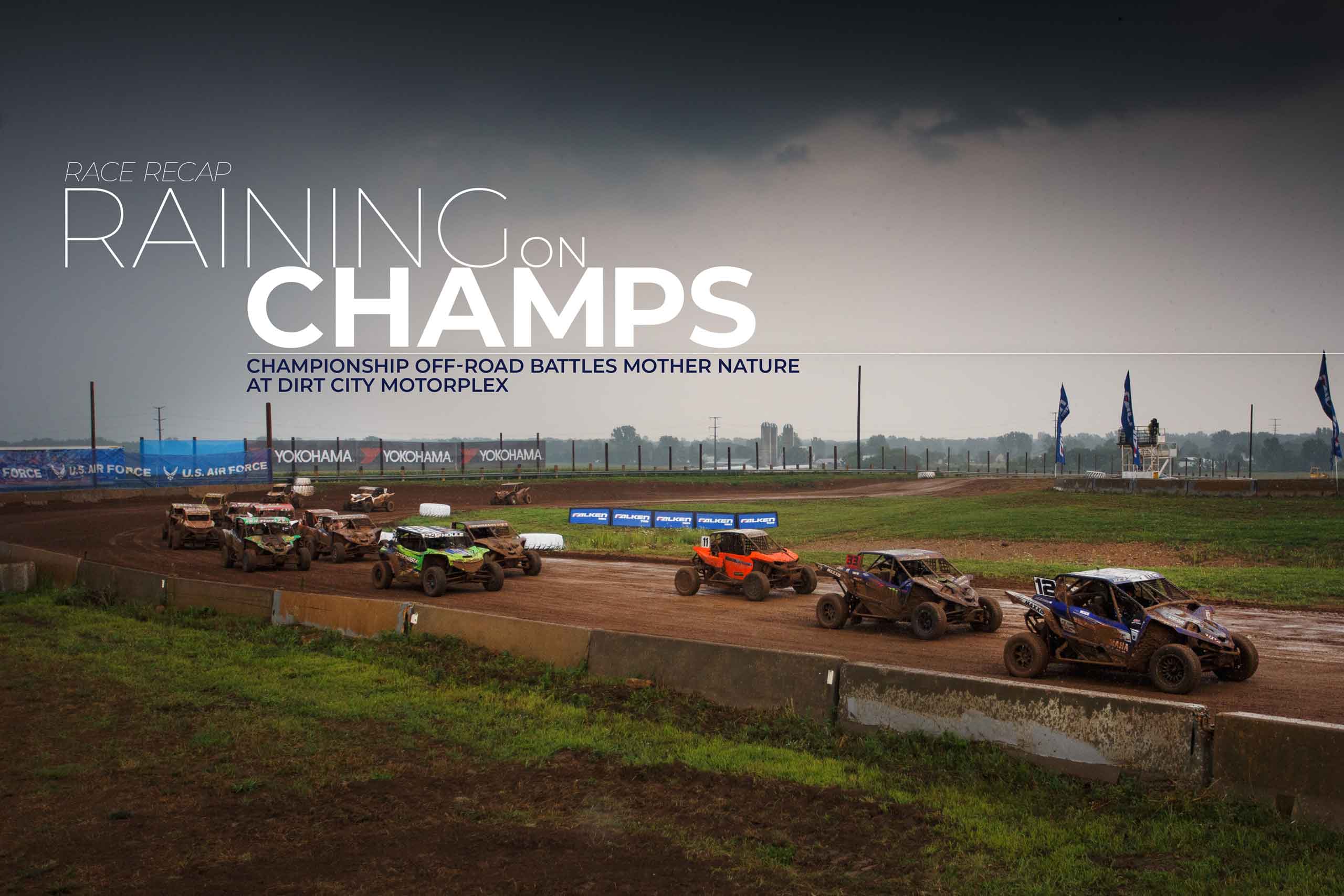 Story And Photos By: HighRev Photo

With the Championship Off-Road (COR) racing season passing its mid point this weekend at the Dirt City Motorplex in Lena, WI, it was time for teams to set their sights on the weekend’s finish line and get ready for the season’s points chase. The track in Lena started out only two years ago as a small Sportsman track that had a five year plan to build up to be able to have the logistics to run the Pro series there, but due to the impact that COVID had on the sport they were challenged with fast forwarding their plan.

The small town motorplex is mostly run by a group of volunteers and their families that all stepped up in huge ways to be able to have COR run a full event there last year and showed continued growth with improvements to the track this year including the much needed expanded parking for all the teams.

While the track and crew had everything together, Mother Nature decided to throw a wrench in the plan at the start of racing Saturday.  Throughout the week prior, there was a reported chance of rain for Saturday afternoon but even as race time approached there was nothing in the forecast. Everyone sighed with relief and looked as if the soggy bullet was dodged. If anyone has spent any time in the midwest though, you know trusting the forecast is like trusting the guy in a parking lot who wants to sell you a set of speakers.

As if it were a cruel joke, the clouds darkened and water poured from the sky just as the Pro Stock SXS class started their site lap before the green flag. Any tire grooving and suspension setups for a dry track went right through the window nets.

In the Pro Stock SXS class CJ Greaves and Brock Heger have been battling hard all year swapping wins round after round.  Coming into the weekend Greaves held a decent points lead over Heger and extended that further after Saturday’s rainy Round 7. With the unexpected muddy conditions Greaves and other drivers who run a mud terrain tire saw consistently faster lap times then those running the less aggressive tires, which were suited for the anticipated dry dirt and blue groove.

Lap after lap the conditions worsened as the rain wouldn’t let up, which meant tear offs were at a premium and many drivers ran out well before the halfway point. Just as the rain started to clear the checkered flag appeared, Heger found his way to a third place finish but Greaves running the more aggressive tire took home another win adding to his points lead. Trevor Bushmaker who hasn’t found himself on the podium this year at all was able to get through the bad conditions and land on the podium between the two.

Round 8 on Sunday had the track in perfect condition, thanks to the crew working to get the mud off the track and back to normal conditions. This time Heger was able to get some revenge and come away with a dominant win, Greaves didn’t have the same luck he had the day prior. A flat tire halfway through the race set him to the hot pits which left him in the back of the pack. He was able to make some late moves but only got up to eighth place before the checkered flag dropped. That finish turned the points lead over to Heger, now only four points separate the two going into the final four rounds.

In the Pro Mod SXS class, there has been more winning drivers taking the gold in the last six rounds. Andrew Carlson winning three of those including the sweep of his home track, ERX Motor Park, just a few weeks ago.  Carlson came into Dirt City with a comfortable points lead but this weekend left him with a little less cushion.

Rodney VanEperen has been keeping Carlson honest all year and shrunk Carlson’s point lead after winning Round 7 on subpar racing conditions in the slop. Carlson would have to settle a few spots back after having a mediocre race due to a mechanical issue.

Sunday’s race gave Kyle Chaney a breath of fresh air. Chaney had a bad fire on Saturday burning up much of his electronics, but came out with a vengeance leading wire to wire. VanEperen would finish in second place, one spot ahead of Carlson, allowing him to get within 8 points heading into Round 9 at Bark River, MI. Lots on the line and pushing both drivers to perform, should be an exciting stop on the season. We will have to wait two weeks to see how it all goes down.