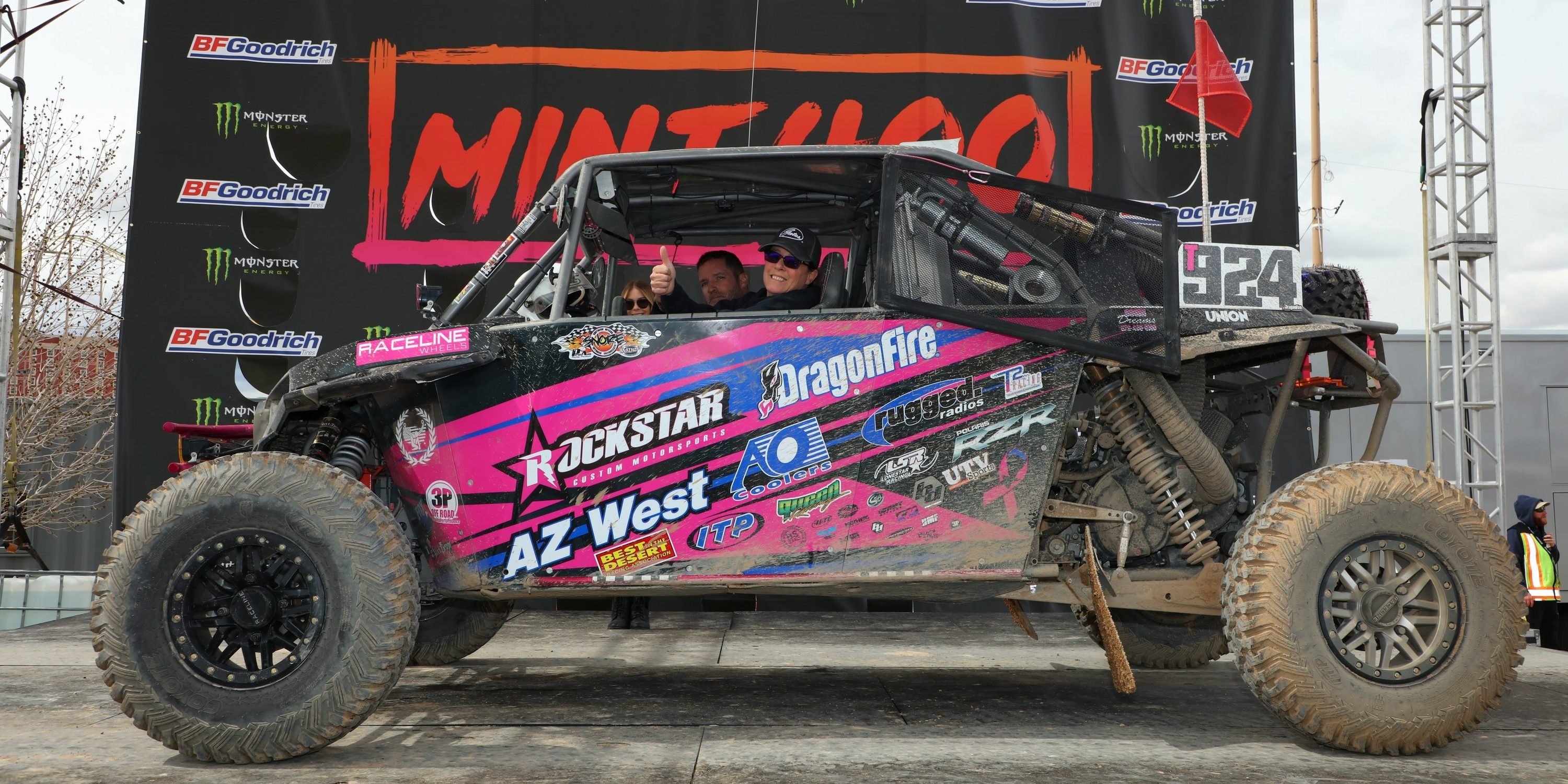 Fighting high charge temps, loss of turbo, and miscellaneous other issues over the last year has been very frustrating to say the least. The start of the season was no different. So, after the Parker 250, we brought the car home and took her completely apart. New motor, transmission, suspension components were all placed on the chassis. We were finished early enough to have the car properly tuned by Queen Racing before the race. The car was fast again! And I couldn’t wait to drive it! The night before we were to leave for the Mint 400 parade, Trevor was putting heat cycles in the new axles. Driving up and down the street in front of our house. All of a sudden the motor temp shot up and the car shut down! My heart sank. Eric thought for sure it was probably the water pump. Not a big deal he assured me. A closer look found the oil pump had dropped the gear. Not knowing how much damage may have been done by the chain, we had to pull the motor out. We contacted out closest racers and friends for anyone that may have a motor we could use. 3P Off road was generous enough to lend us the motor out of their 4 seat pre runner that we fondly refer to as the rental. We knew that motor had very few mild miles on it and were eternally grateful to the Texas boys for allowing us to use it. Trevor, Eric and Travis swapped motors like they knew what they were doing and we were off to the parade! First time we would make the parade in the last 2 years. 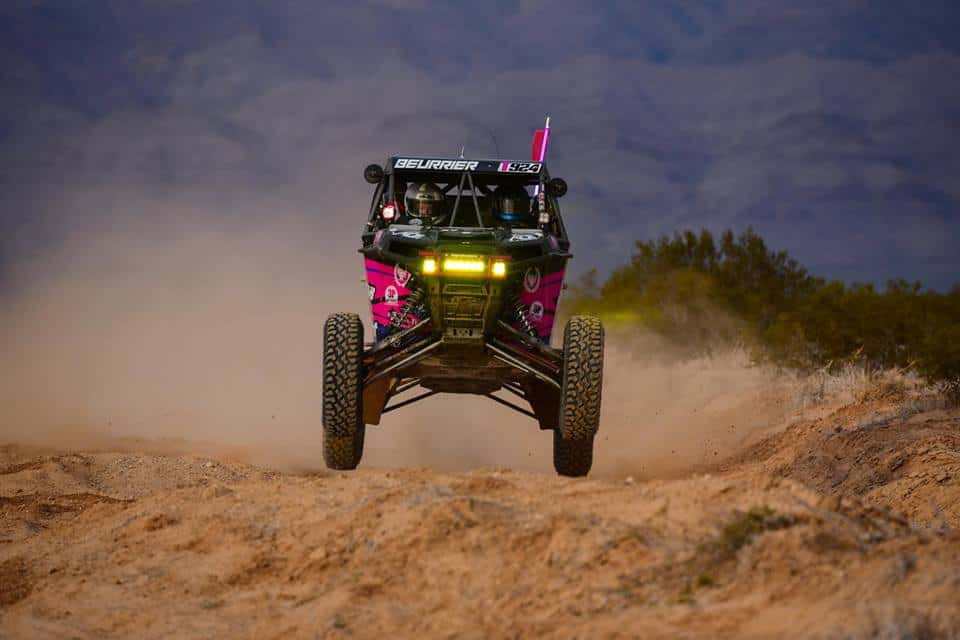 The kids and I loaded up and headed for Las Vegas! But as luck would have it, about half way there we got a flat tire on the trailer. No problem, I had 2 big boys to fix it and we had plenty of time to make it. But, the spare we brought didn’t fit. We notified Eric who was finishing loading the chase truck, and would have to wait until he arrived with the right tire. No parade for us yet again. We had a few laughs about it while we waited and fixed it up as soon as the rest of our crew arrived.

We made it to the RV park, settled in and then the kids wanted to go to the Vans shoe outlet just a few streets away. So, we went. Trevor and I got matching shoes that matched the race car!

Thursday was a free day for us so we walked around tech and chatted with all our sponsors until the Rugged Radios Driver Meet and Greet. Trevor and I loaded up our hero cards and headed down Fremont St. to greet our fans. We had such a good time with everyone that came to see us and our fellow racers! Afterwords we had some dinner and headed to Hogs and Heffers for some cocktails. We had a great time with our crew, 3P, Miss DragonFire, Harley Letner, Craig Scanlon and Sara Price! 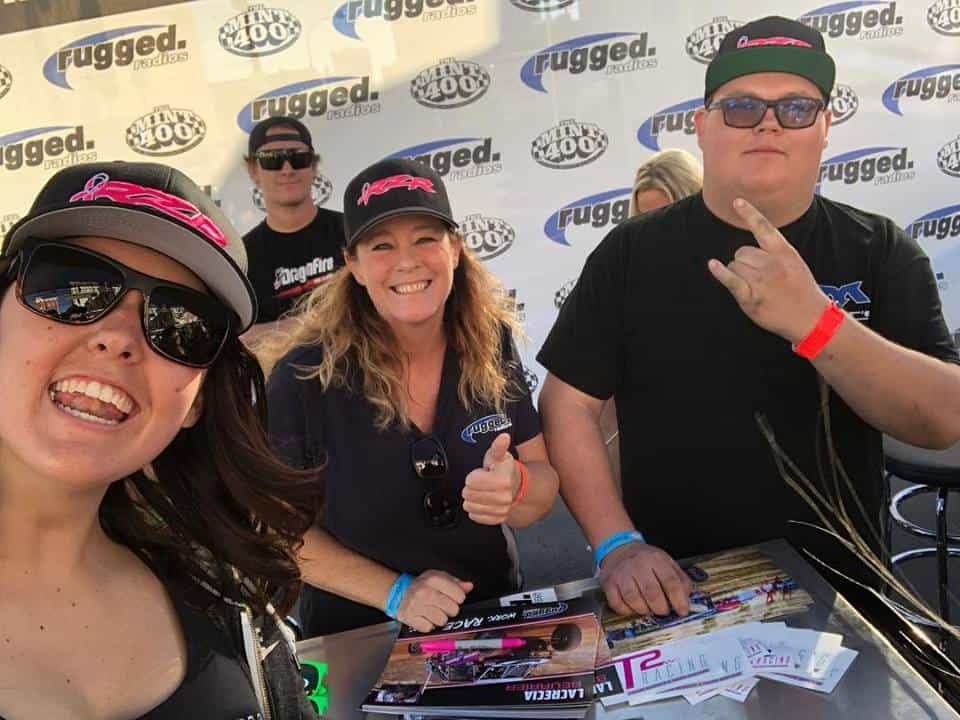 Friday was tech day for us. Trevor was up bright and early shining up the Polaris RZR and we loaded her on the trailer and headed out. We spent most of the day hanging out our friends at S&B Filters and showing off our awesome car! We finished tech and Trevor and the crew took the car out to Apex for some clutch tuning. Tuning went well and Trevor said he was super happy with car. We loaded her up again and headed out the start finish area. Saturday was another free day for us and we took full advantage. Going to all the festivities at the start finish area, and napping! 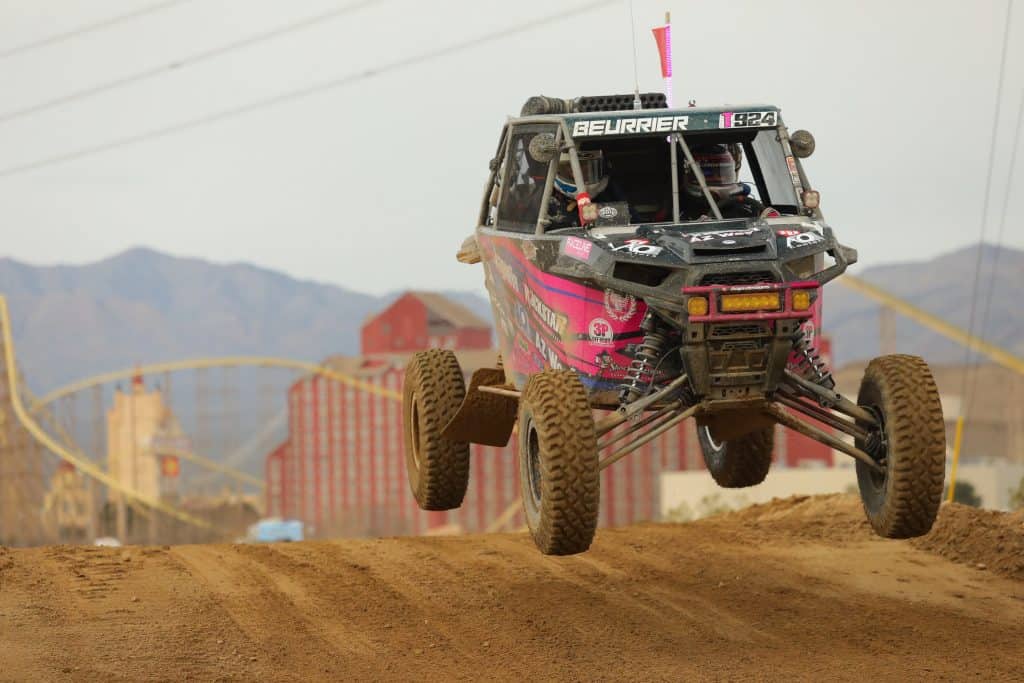 Sunday Morning came super early. Trevor got ready and he and Chuck Foreman from Pro Eagle Jacks jumped in the car and headed off to the start line. We bundled up and headed there ourselves. This would be the first time this Mom would send her son off the start line at the Mint 400. We were all very excited. As they were staging, our friend and fellow racer Michael Isom of the Mobbin crew warned me about a terrible section of the race just outside pit A. He had crashed there and so had many others on Saturday. I ran down the staging line to ensure Trevor and Chuck were aware and headed farther down so that I could also inform the 2 3P cars in the NA class. 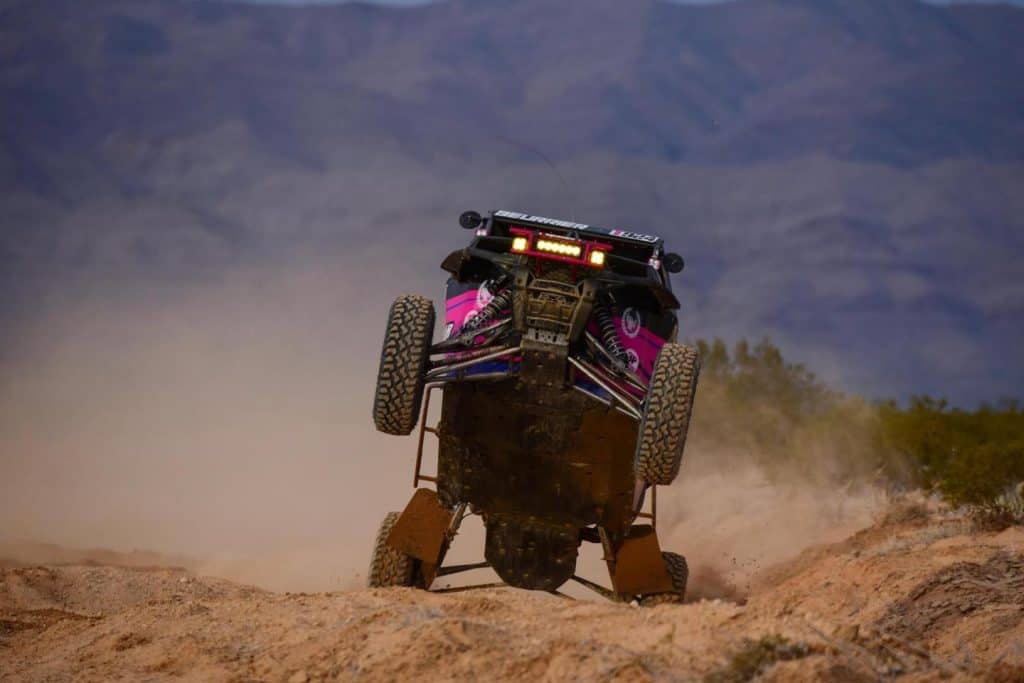 Trevor took the green and light and I had tears in my eyes! He didn’t get the hole shot, but I didn’t care. That was my boy driving! About 11 miles in he blew a belt. They replaced it quickly but at race mile 18 they blew another one! The result of a ice cold belt on a hot clutch was the most likely culprit. They were doing great after that and we got word that they had made it through pit A. Fingers crossed that they would remember the danger there, we waited to hear from them. Trevor hit the giant holes there a little too hard and sent them tail to nose a couple of times. Luckily for them, they stayed on all 4s and continued on. The car was fast and they made it to main pit quickly. I asked Trevor if he wanted to stay and in he said “nope, I’m getting out!” So I suited up and got in. There was a flat on the passenger rear and a torn axle boot. Repairs were made and Chuck and I tore off. The car felt so good! I was cruising the track at 82 MPH before I even knew it! I was so happy! And then, in the same area Trevor had an issue, we lost another belt. Now we’re thinking maybe the clutch was not quite aligned after the quick motor change, but no time for that now. Chuck and I changed it quickly enough, but it took me forever to get buckled back in. At least it felt like it. Then we were back and running. There were broken cars littering the track! We made it through the treacherous area outside of pit A without incident. We called main pit to have them stiffen up the shocks for our last lap, but, they gave us the checkered flag! We were so disappointed. 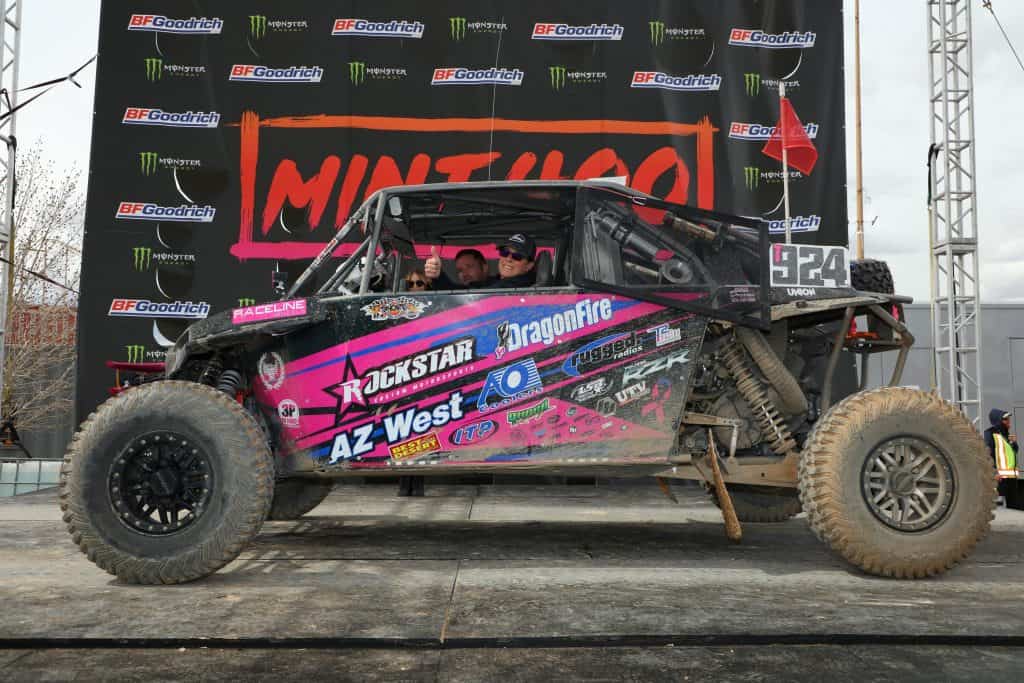 They were calling it a grand prix finish and the first class 10 cars had finished their 3 rd lap. It was also for safety as the Trick Trucks were about to take off. Though we could have possibly improved our finish position, we could have also broken down and not finished at all. 36th place is better than a DNF on any day! 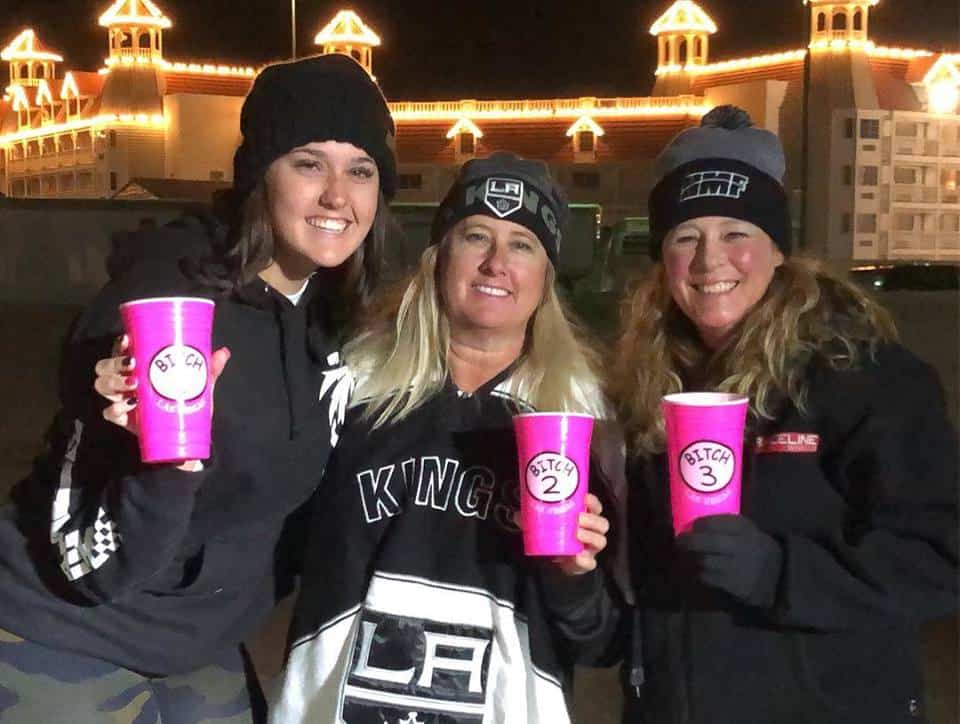 We had so much fun this year with our friends and family! Thank you so much for all the help and thank you to our crews out in the pits! So glad we didn’t need you! Thank you to all our sponsors who continue to make the dream come true for us. Trevor and I will be back in a few short weeks at the UTV World Championship! 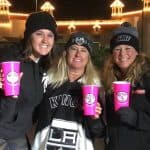 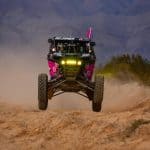 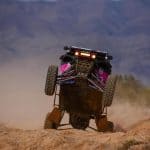 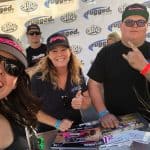 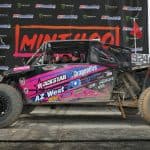