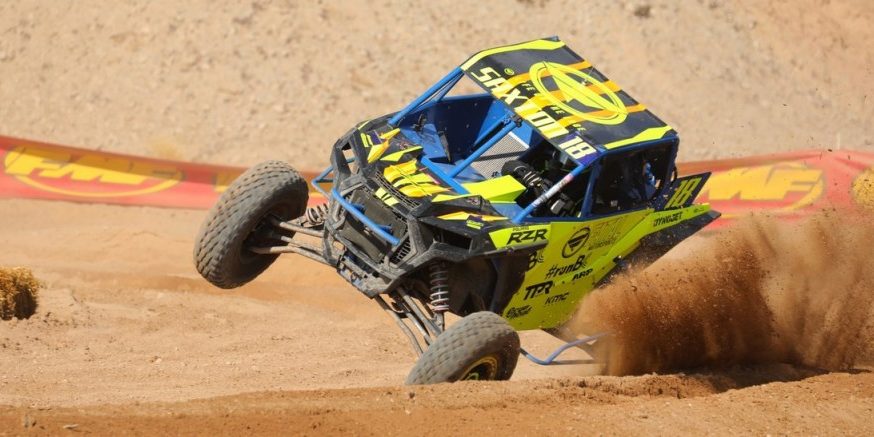 Blythe, CA – Shawn Saxton won his first ever SXS Pro Production race during the ATV MC WORCS Series presented by Polaris RZR event at Shorty’s Sports Park. Cody Bradbury drove a Polaris RS1 to victory in SXS Pro Stock. The event was the seventh round of the 2020 season.

The event was held at a brand-new-to-WORCS facility. Described by Pro driver David Haagsma as “Havasu without the bikinis,” the track featured deep sand throughout with rocks buried within. The course definitely put the “off” into off road with deep ruts and jagged rocks throughout challenging the large turnout of SXS racers.

Saxton has toyed with greatness all season and has seemingly been in the mix in nearly every race. This weekend, he put it all together in his Polaris Turbo S. Though technical issues and a charging Beau Baron made it difficult in the waning laps, he wasn’t going to be denied and came home with his first WORCS Pro victory. Baron was second, ahead of the Can-Am of John Bonanno. 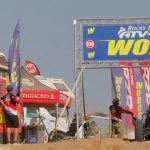 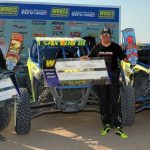 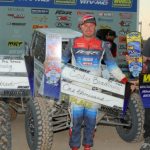 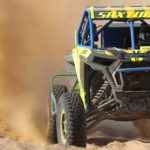 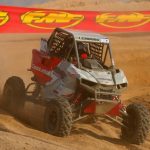 “This Polaris Turbo S handled amazingly out there,” explained Saxton, who earned a podium in round four and looks to be a true points competitor for next season. “Despite some issues late in the race including my seat coming loose and power steering issues, as well as Beau catching me, we turned it up and got it done.”

Baron has begun to turn around his season in Pro Production. While he leads the Pro Stock points, success in the faster Turbo class has been elusive for Baron. After finishing second in the last race, he backed that up with another runner-up finish here after starting on the second row. “Once I got some clean air, I was throwing down some serious lap times,” said Baron. “I caught up to Saxton and I got right on his tail, but he would gas that thing and the exhaust pipe comes straight back and it would blow you out of the car with melting temperatures. I got next to him a few times, but bottom line is there was nothing I could do to get past him.”

Bonanno made the switch to the Can-Am Maverick X3 this season after running Polaris machines in the past. His second podium of the season goes to prove he’s starting to learn how to get the most of the new car and he now sits third in points, carrying the banner for Can-Am. “I’m starting to think I belong in this thing,” said Bonanno pointing to his car. “I came from driving the Polaris and it’s coming together in this Can-Am. It was awesome that everyone had to learn the track. It made it a very fair and competitive race.”

Corbin Leaverton finished seventh and still leads the championship by 23 points ahead of Haagsma, who finished 10th in a Polaris RS1.

In Pro Stock, Cody Bradbury made a homecoming of sorts. Though most of the field had little data or experience here, Bradbury’s family owns land in the area so he knew the track well and he showed it. After starting on the second row, Bradbury quickly got into the lead on time adjustment and held it until the end. Dylan Lemburg was second, followed by Haagsma, who finished first physically after leading every lap.

Bradbury was pleased with his success after what has been a thoroughly disappointing year for the WORCS veteran. With his Turbo car being prepared out east, he elected to run his Polaris RZR RS1 in both classes, making his first start in Pro Stock.

“It’s been a rough year and this was just my second time in the RS1,” explained Bradbury. “I really didn’t get the best start, and charged hard taking the lead on time. I’m pumped to finally get a win. My family owns 88 acres near here so this was like coming home for me. They did a good job with the course today. It was super rough, but super fun.”

Lemburg has come on strong in the last few rounds, scoring his first Pro podium, a third, in the last round at Glen Helen and then backing that up with a second-place finish here. He credited his team with the success. “It was really rough out there but the car handled great and I was glad to get up here,” said Lemburg. “My team is in the shop working hard every week. The recent success goes to them.”

Haagsma took the holeshot and began immediately building a gap. Toward the end of the race, his team informed him he was losing time and was falling back in the field on adjusted time. Turning up the wick resulted in him nearly crashing, so he took the third, and held onto third place in points. “I tried to pick it up to make up more time and I started smashing into stuff,” said Haagsma. “This is great for me in points. I’m now within eight points of the lead, so I’ll take third.”

Baron remains the points leader in Pro Stock, with Chris Johnson, who finished 11th, in second. Haagsma is ahead of Matt Hancock in a numerical tie in third and fourth, respectively. This four-car battle for the championship is sure to be one to watch as the season wraps up.

The WORCS SXS classes will hold their final two rounds of the season during the SXS World Finals November 20-22 at Buffalo Bill’s Resort and Casino in Primm, NV.