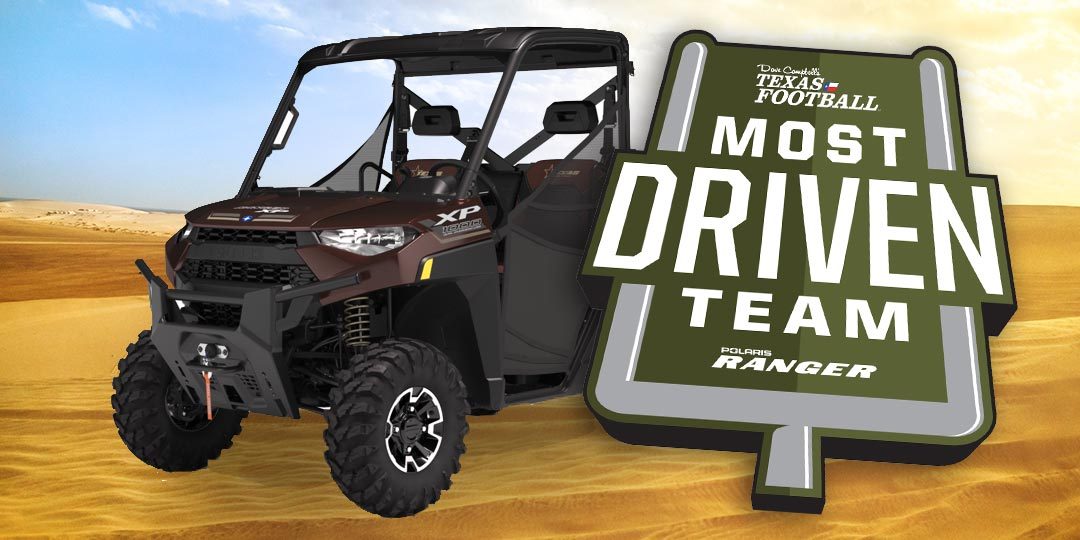 Polaris RANGER worked with Dave Campbell Texas Football to identify five schools that embody the hard-working values of the brand. Each school has a compelling story that places them amongst the “Most Driven” squads in the state. The five finalist schools are Fort Bend Marshall, San Antonio Reagan, Northside O’Connor High School, Longview High School and Aledo High School.

“Texans are passionate about high school football and understand the hard work required to be successful under those Friday night lights,” said Josh Hermes, RANGER marketing director. “We’ve created Polaris’ Most Driven Team campaign to highlight the teams and schools that embody those values and demonstrate the drive it takes to be successful both on and off the field.”

The five football programs were selected to share the unique story of what drives their team and community as they compete for the title of “Polaris’ Most Driven Team.” Polaris is asking fans to visit TexasFootball.com/MostDrivenTeam and vote for the high school football program they believe is most deserving. The website features video profiles of the five teams displaying what drives them. The winning school will be announced at the University Interscholastic League Football State Championships on December 21 at AT&T Stadium and will be presented with the grand prize, an all-new 2020 RANGER XP 1000 Texas Edition vehicle for their program. Fans who visit TexasFootball.com will also have a chance to enter to win their own RANGER XP 1000 Texas Edition.

Texas native and professional football player Cole Beasley has joined the effort. “Being from Texas and having played football at Little Elm High School makes being part of Polaris’ Most Driven Team initiative that much more special,” said Beasley. “Being a pro football player is amazing, but there’s nothing like being under the Friday night lights with the guys you grew up with. Having something to play for, something to prove and coming together as a single unit is what football and this campaign is all about.”

RANGER is the hardest working utility side-by-side, known for meeting the demands of consumers who tackle some of the toughest jobs and love the outdoors. The newly launched 2020 RANGER XP 1000 Texas Edition offers consumers in the Lone Star State even bigger and better features on America’s best utility side-by-side.