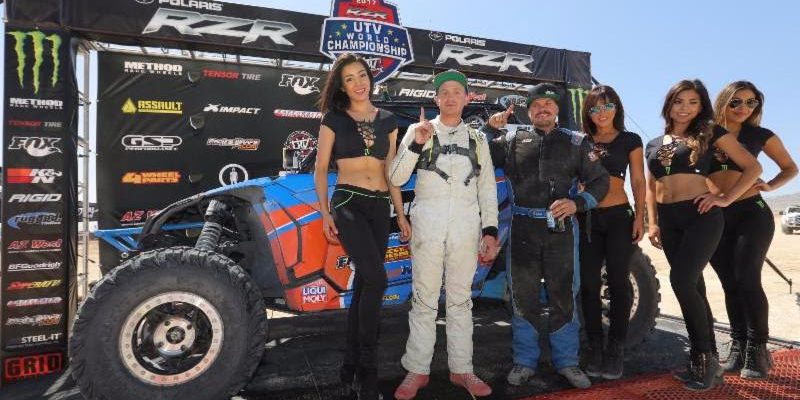 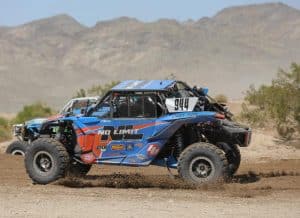 Blurton, a small privateer racer, started from the third row in the long course race at the UTV World Championship, but still overcame the grueling course, stiff competition and gnarly terrain to earn his first career UTVWC title and Best In The Desert victory in his new Can-Am Maverick X3 with ITP Ultra Cross R Spec tires. (Foley)

“It’s great to see Phil Blurton get his first career ‘Best In The Desert’ win — and do it on ITP Ultra Cross R Spec tires,” said Rhett Turpin, Head of ITP Sales. “The UTV World Championship continues to grow in both the number of racers and international prestige, so a 1-2 finish in the long, difficult desert race is fantastic – and especially gratifying to ITP engineers.”

Blurton, a Pro Turbo class rookie, and his co-pilot, Beau Judge, started on the third row, but eventually worked their way to the front on the challenging 16-mile desert course outside of Laughlin, Nev. Their No. 944 Can-Am Maverick X3 SxS, outfitted with 8-ply, 31-inch ITP Ultra Cross R Spec tires, ended the day in front of more than 100 other vehicles competing in the “Safecraft” long course desert race. It was Blurton’s first BITD win in just his second start in the series.

Justin Lambert (Cognito Motorsports / ITP / Polaris), the reigning UTV Production class champion, finished second overall and second to Blurton in the Pro Turbo UTV class. Lambert appeared to be in the driver’s seat for another UTVWC win, but a small mechanical delay ended up slowing him down enough to allow Blurton to capture the lead based upon adjusted time.

About ITP
Since 1982, ITP has been the world’s #1 ATV/UTV aftermarket tire and wheel source. The premier ITP products are developed utilizing an experienced staff of engineers, designers and technicians at its two American tire facilities in Clinton, Tennessee, and Jackson, Tennessee, to develop award-winning tire-and-wheel designs for virtually all ATVs and side-by-side vehicles. Numerous outlets distribute ITP tires across the United States and in more than 25 countries worldwide. ITP is a registered trademark of The Carlstar Group, LLC. For a free, full-color ITP catalog, call toll-free: 1-800-889-7367. Tech questions call: 1-909-390-1905. Visit:
www.itptires.com
About The Carlstar Group
The Carlstar Group is headquartered in Franklin, Tennessee, and is a global manufacturer of original equipment and aftermarket specialty tires and wheels for the agriculture, construction, outdoor power equipment, powersports, high-speed trailer and flat free/manual markets. The diverse portfolio of solutions are offered under several leading brands including Carlisle® tires and wheels, ITP® tires and wheels, as well as Cragar®, Black Rock® and Unique® wheels and Marastar® flat free and manual tires. The Carlstar Group employs 3,000 associates in 14 facilities located in four countries. The Carlstar Group has created a culture of converting great ideas into advanced products and has a legacy of excellence in product innovation, quality, and customer service. For more about The Carlstar Group, visit www.carlstargroup.com
Categories: On The Track, Read All About ItBy UTV Sports MagazineApril 21, 2017