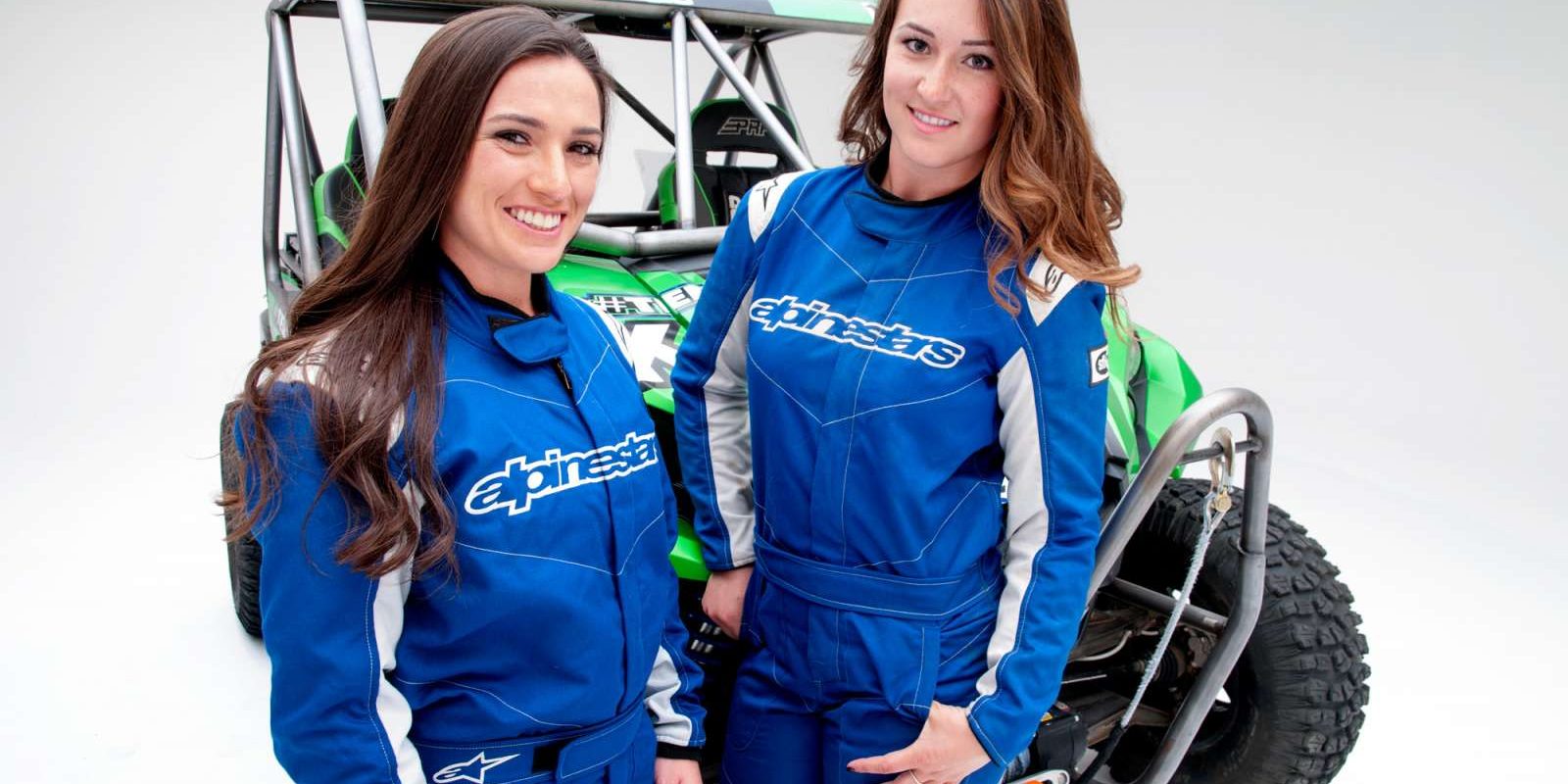 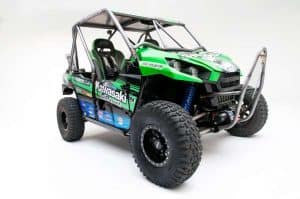 “Our rock crawling Teryx needed to be nimble, capable and durable. We also wanted to be able to get in and out of the machine quickly. It needs to be able to also climb its way through some of the most challenging off-road terrain that any UTV would ever see. So building a new roll cage for our Teryx was crucial to the project,” says Sara Price.

“When Erica (Sacks) and I formed the Teryx Girls last year, we knew we would be racing some of the toughest races in the world,” said Sara Price. She was telling us about her first UTV adventure, which was a doozy. It was a rally race held in the wilds of Africa’s Saharan desert. “We formed a strong bond in the Sahara Desert last year, and now we are ready to take on new challenges to show everyone the strength of the Teryx Girls.” said Sara. It was in March of 2015, that the Teryx Girls (Sara Price and Erica Sacks) with the support of Kawasaki, made history driving a Kawasaki Teryx side-x-side for nine days in the Sahara desert. To their credit they actually finished the 25th Annual Rallye Aicha des Gazelles, in Africa, surviving one of the toughest off-road challenges of their careers.

Price and Sacks were the first American UTV team to compete in what has come to be known as one of the toughest all-female motorsports events on the planet. They even finished seventh in class in their first serious off-road rally. The Rallye Aicha des Gazelles is a nine-day navigation challenge. It takes teams of two women (it is a women-only event) and gives them a manual compass and hand-drawn maps from the early 1950s. Having only those two items, they were then on their own to plot a course through the challenging desert landscape. Whoever had the shortest distance across the Sahara Desert would be declared the winner. The Teryx Girls, Sara Price and Erica Sacks, are now on a vision quest. They want to show off their skills as off-road racers, onboard their factory-sponsored Kawasaki Teryx UTV. 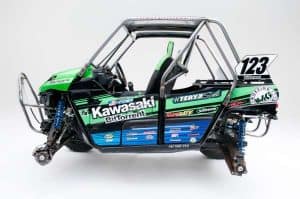 Another one of their sponsors is BitTorrent, a technology startup that is Internet based, and helping racers/drivers tell their stories. Expect to hear more about them in the future.

Sara and Erica are long time buddies, and have teamed up to become the Teryx Girls. Price is a professional motocross racer, who has transferred her skills to UTV racing, while Sacks is an accomplished gymnast and experienced off-road racer and navigator. The two ladies have taken to UTV off-road racing, and are looking to make a name for themselves in the sport. While they do occasionally get help from a few men, they mostly do the job of building and preparing the machines on their own. During the Rallye Aiche des Gazelle, Sara and Erica had a rough go of it. They slept the first two nights alone in the giant Sahara desert, when they ran out of gas out on the course. That would not stop them from their ultimate goal of finishing this first great adventure in the Moroccan desert of Africa, which they eventually did.

New Goals For A New Year…

After tackling the various terrains and trying conditions they found in the Sahara Desert in Morocco, the girls set new goals for 2016. They kicked the New Year off by competing in the 2016 King of the Hammers race. It is one of the toughest single day off-road races in the world and is held in Johnson Valley, California. The Hammers consists of a rugged 120-mile race course, part rock crawling and part high speed desert racing. Thousands of off-road racers, teams and fans from all over the globe gather there each year to see who can navigate the rocks and claim the title of “Ultimate Rock Crawler.” An entire city springs to life out there each year and is called “Hammer Town U.S.A.” The racers navigate their way through rough open desert terrain, sandy dry lakebeds, and intense, jagged rock filled canyons, with giant skid plate puncturing rocks everywhere. They were there to showcase the strength and durability of their Kawasaki Teryx. Kawasaki outfitted a brand new 2016 Kawasaki Teryx for the girls for this event.

“We are honored to be part of Kawasaki’s female UTV race team. Our build of the Teryx was a major undertaking, but we learned a lot during the Rallye Aicha des Gazelles, which of course we’re incorporating into our ‘King of the Hammers’ Teryx,” said an affable and energetic Sara Price. 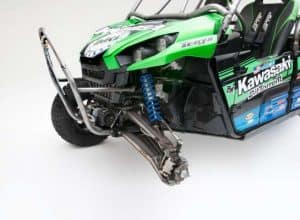 Sara Price is a professional motocross racer who has made her mark in her chosen industry. She is a factory supported female racer, riding under the Monster Energy Kawasaki banner. Sara is also an X-Games medalist, and has recently ventured into doing occasional stunt work and driving. She hopes to break into the film industry, both as a professional stunt driver and racer. She is determined and hard working, and now setting her sights on a slightly new direction, by racing in a few select off-road UTV races.

As a young business woman and role model, she is constantly striving to help improve the image of women and motorsports. Not only is she fearless, she has recently competed in beauty pageants to prove a point that women can be gorgeous and sexy, but then be just as good as the men out on the race track. We spoke with Sara and asked her about her career, UTV racing, and what she plans to do in the future. Here is what she had to say.

Sara, tell us a little about yourself. How did you get into this sport?

I’ve been racing motocross since I was eight years old. That’s when I first got into any sort of motorsport. I came from horseback riding before that, where I competed in show jumping. I’ve raced motocross and had a pretty good amateur career in the sport. Then I turned professional and had another career in professional motocross. I was the first factory female rider for Factory Kawasaki team. I also medaled in the X-Games. I’m the most winningest amateur motocross racer to date, still. Once the X-Games were over, I transitioned to side-by-side and UTV racing. My dad used to race Baja in Class 10 vehicles. So, now I’m in UTVs full time. I race a street car, as well. I drive a lot of things and still have fun on my dirt bikes, doing stunts as well, for motorcycles and driving.

I love it all, honestly. 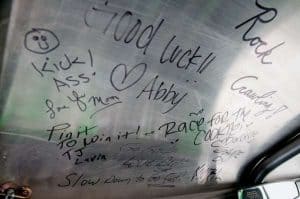 The Teryx Girls have fun allowing friends and sponsors to sign the underside of the roof panel on their Kawasaki.

Can you pick just one?

For me, it was motocross, which I have ridden my whole life. I grew up doing it. That was my passion, my goal, and that’s what I wanted to do forever. I did it the longest but now I have to say that UTVs are my new passion. Driving them definitely gets me that adrenaline rush that I need to be satisfied as a person. I think UTV racing, like any new love, will never be exactly the same, but I love driving, and there’s nothing quite like it.

Explain this quote that was posted on your Facebook page… “I’ve been scaring my parents since I could walk.”

I have to admit, I was a wild child growing up. I had so much energy. My parents always Had to keep me occupied with something. So, when we moved to Canyon Lake, I found my way to the horse stables, which were right down the street from where I lived, when I was about six years old. Ever since then, I was showing horses, jumping horses, the little kid that would jump on the biggest and baddest horse and not be afraid. Still to this day, my parents get scared. While riding motocross, and when I would hit the big jumps, my dad used to be pretty tough on me. He’d say stuff like, “Being a wuss is not allowed.” Then he started seeing me hit the triples and big jumps, and he was like, “Oh man. What have I done? Maybe I don’t want to push her anymore, because this is just getting scary now.”

Now that I’m in the UTV races, they’re all very happy, because I have a cage around me to help keep me safer…(laughs and smiles). Having a cage is a big deal as you get older that’s for sure… I will never forget my mom… I was drag racing. I was popping wheelies down a drag strip on a motorcycle street bike, and I posted a picture of it. My mom had just figured out how to check Facebook and stuff like that, and she happened to see that picture of me at the drag strip. So, she sent it back to me with a little note… “Don’t you dare be driving down a drag strip ever again, you hear me young lady?”….(Sara laughs and smiles again).

I pretty much race UTVs now; my co-driver, Erica Sacks, and I are the Teryx Girls. We got our Teryx UTV directly from Kawasaki, after approaching them about racing in Africa, at a Rally event. It was off the wall, and we were a bit surprised that Kawasaki said yes to us entering this long distance desert rally race. It was our first race on a UTV for Kawasaki. They were into it though, and gave us the vehicle to do it with. It was a blast, very challenging and tough. We even got lost, ran out of gas, and spent an extra couple of days in the desert before finishing the nine-day event.

Do you have any mentors and heroes, and why?

One of our mentors and role models is Emily Miller, who was actually a big mentor for us. She taught us how to navigate and how to get through the desert. After all, who wants to be lost in the Sahara Desert for nine days? Emily was definitely our mentor, and helped us a lot. We’re doing another Rally that she’s putting on here in the states, which is going to be super exciting. Unfortunately, not in a UTV this year, but next year, we’re crossing our fingers to do some more Rally events in our Teryx in the future.

What does the future look like for you and the Teryx Girls?

Erica and I are looking forward to doing more events on our Kawasaki Teryx in 2016. The latest rally we’re planning on riding is here in the states. It is similar to the African Rally in that it’s a navigation contest, but this time we will be allowed to use GPS and Navigation equipment. All in all, between UTV racing, stunt driving, and all the other stuff we’re doing, it keeps us plenty busy.

The Teryx Girls would like to extend a special shout-out to their sponsors which include: