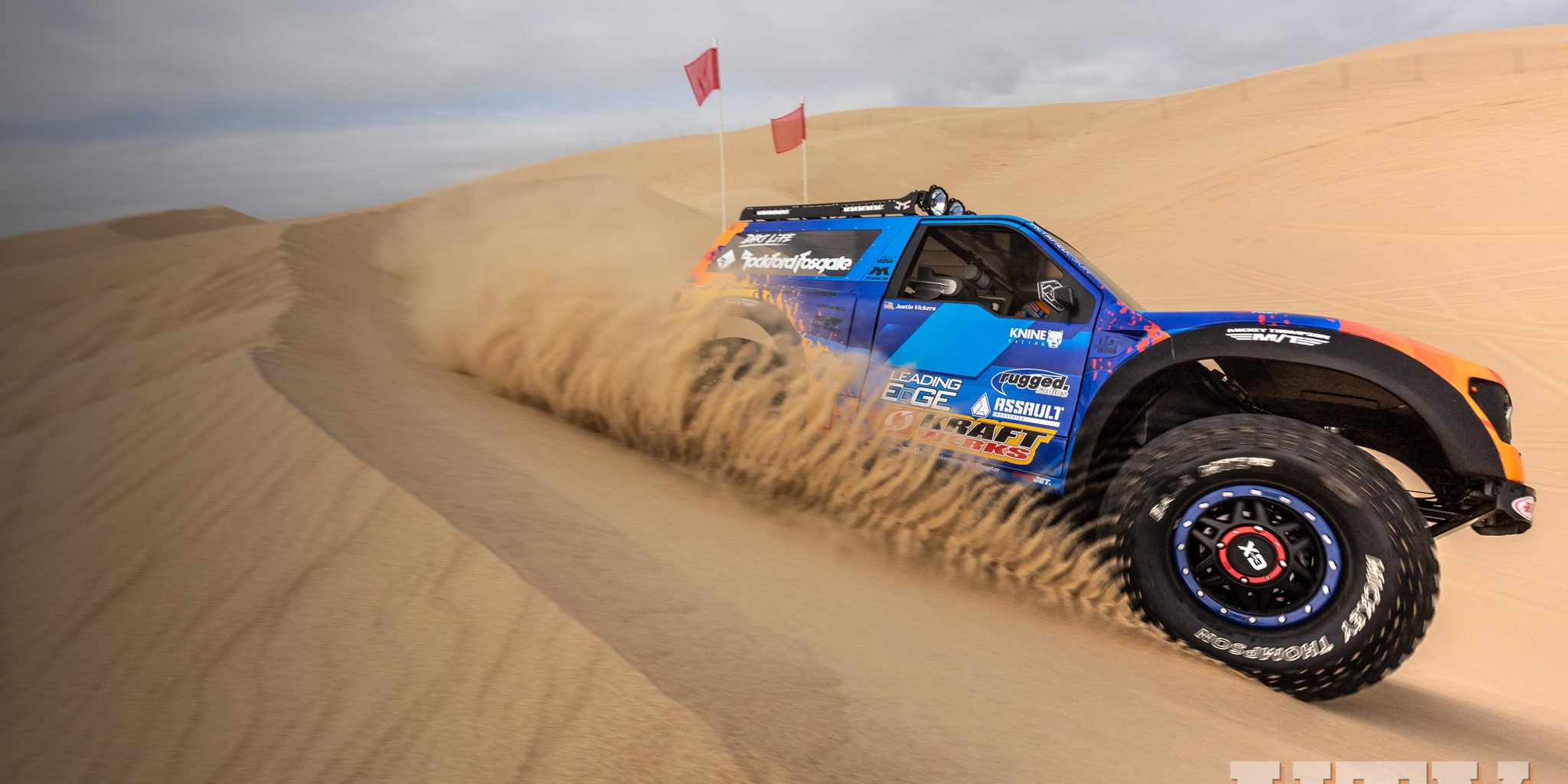 Justin Vickers is a good ol’ Georgia boy with a deep passion for anything fast and loud. His wild ideas and never give up attitude make him well suited to the tumultuous world of building and racing all types of vehicles, and has done so all throughout his life. Most recently, the wild ride of piloting a pro modified race car around the often rough and jumpy, high speed dirt ovals had brought on the desire to get down and dirty in some real off-road racing, specifically with the goal of racing the 2017 Baja 1000. With the rise in popularity of UTVs, increasing competition, and low(er) cost of entry, Justin decided to start with a Polaris RZR XP1000 to begin his desert car build… 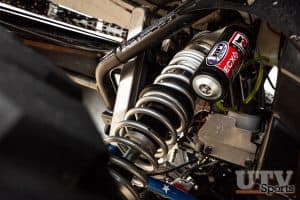 He brought the car down to Outkast Fabworx for a full race chassis, and custom long travel suspension system to withstand the punishment destined to be received while racing down in Baja. JRI Suspension, one of his sponsors from the world of dirt track, came on board and developed a set of custom 2.5” coil-overs equipped with Eibach springs and tuned by RPI, to match up with the new long travel suspension. Together they provide a massive 30” of wheel travel in the front, and 33” of travel in the rear! Shock Therapy sway bar kits and Race Steering Rack beef things up even further in the handling/suspension department, while Ultrashield Full Containment Seats, Racequip Helmets, and NecksGen Neck Restraints are in place to keep the occupants safe. 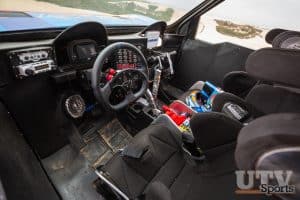 After compounding delays in the build process however, the goal of making it to Baja fell out of reach, and Vickers’ race build took a turn in a different direction, with the new goal of building the ultimate fun-having play and show car. This led him to come in contact with Knine Racing, builder of epic prerunner truck-style UTV bodies, and after a few phone calls, the “Braptor” body was on its way. Now the time crunch was back on, as Justin had a hard deadline of having the car finished by the 2018 Mint 400, to be displayed on Fremont Street. 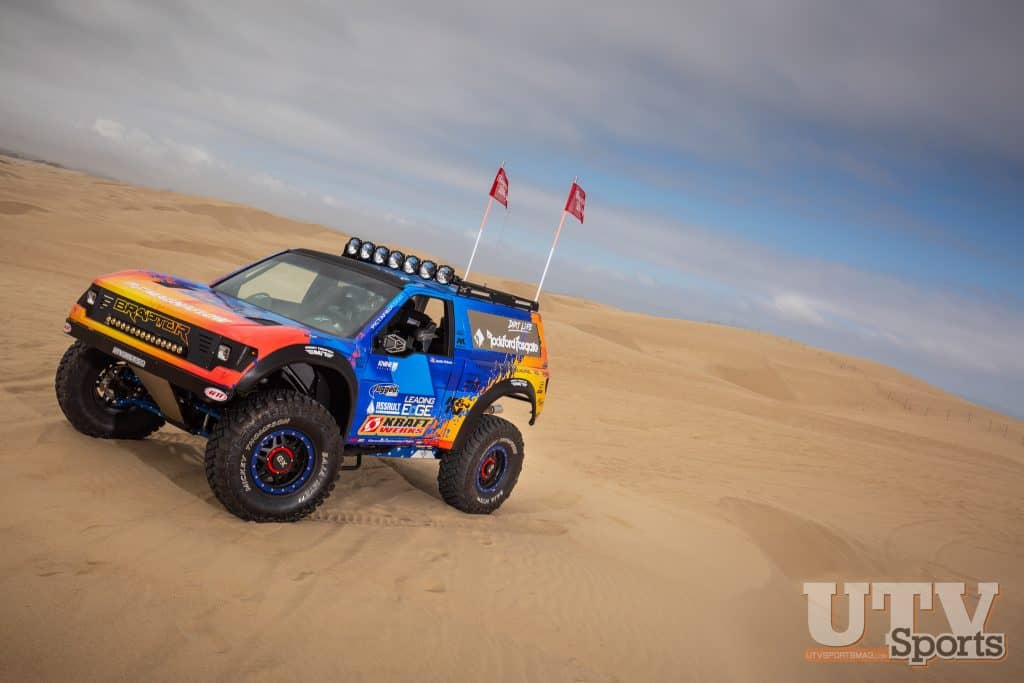 As you can imagine, mounting a Bronco/Raptor body to a RZR is not an easy task, so Rob over at UTV Addiction was enlisted to complete the build, and the car was transported to his shop in Reno, NV. Upon receiving the body however, Justin and crew were facing a huge new problem. The body incurred massive damage in shipping; the Bronco shell was completely destroyed, and virtually every other panel suffered casualty as well. With no time for a replacement body to be produced and shipped, the crew got to work grinding out many never-ending days repairing body panels and getting them fitted to the car. 10 Design Wraps also joined the party of sleep deprived builders to get things wrapped up just in time to leave for Vegas, without the Bronco shell unfortunately. Now that the race to the Mint was over, the topless Braptor went into the hands of the masters at KATG Motorsports to have a shell formed out of aluminum to finish off the once destroyed body. 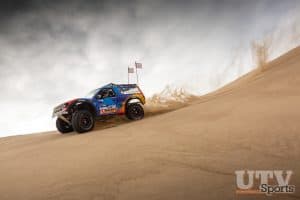 Justin’s need for speed and smokey burnouts led to a Kraftwerks Supercharger being outfitted, which is fed through a K&N filter, the engine runs a Kraftwerks tune through a Dyno Jet Research Tuner, and then the burnt gasses are expelled through a Magnaflow exhaust system. That’s obviously not enough, so a Nitrous Express Methanol Injection system was also added, and everything is monitored through the AIM Sports 7” Digital Dash. Now producing a fire breathing 260 horsepower, the Braptor is now capable of roasting the huge 33 inch Mickey Thompson tires mounted on KMC wheels, or even the Mattracks, and can be done so on command either by pulling the Indecent Motorsports Drift Brake at speed, or by pulling the Hurst Performance Line Lock while sitting still. All of that power is delivered through Leading Edge Performance built clutches and OEM Polaris belts supplied by UTVBelts.com, and all is kept from burning up by Kool Belt Systems when roasting tires or tracks.

When the smoke show stops, a Rockford Fosgate Stage 5 stereo system keeps the party going, and KC Hilites light the way when ripping this beast at night. KC Hilites also built a custom length M-Rack to fit the Braptor’s roof, and it definitely adds to the Bronco look. And talk about looks! Everywhere we went while shooting in Pismo Beach, there was a constant stream of people riding by and stopping to look and ask questions, and Justin never shied away, always happy to talk and explain just what this crazy pint-sized Bronco/Raptor looking vehicle actually is. As night was falling, we threw on the Mattracks and the people kept coming. It’s a crazy sight to see the Braptor on tracks, ripping across the dunes throwing sand in every single direction, and while hitting jumps was no big feat with the Mickey Thompsons bolted on, seeing the suspension fully extended with all four tracks off the ground was insane. This thing is the ultimate head turner. 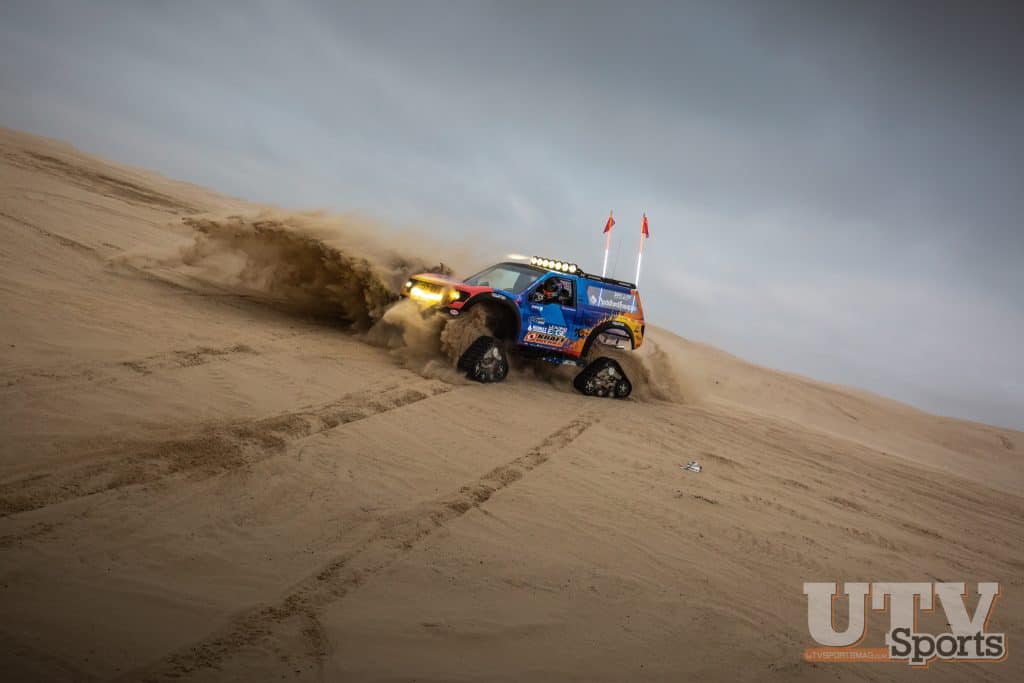 It’s been a massive undertaking for Justin and team to get the Braptor to the running and driving state it’s currently in, but they aren’t done yet. Justin has plans to take the Braptor on Expedition Off-Road adventures, he wants to run it in some drifting events as well as some races, and who knows what other ideas he will come up with. The team still has a long road ahead, but one thing is for sure, they will adapt and overcome any problems that may appear down the road, or may just power their way right through them as the Braptor continues to evolve, causing mayhem and turning heads along the way. 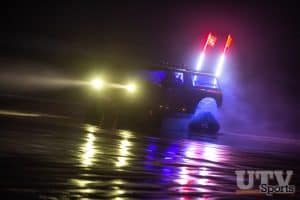 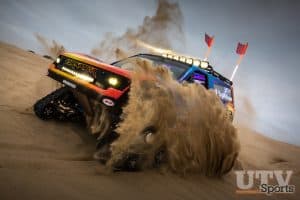 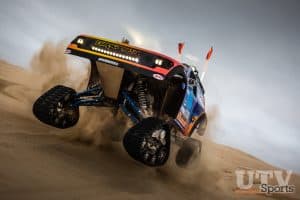 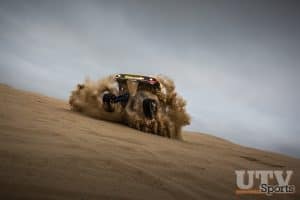 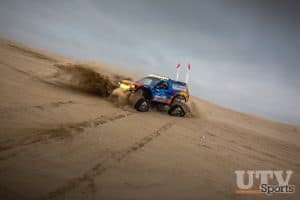 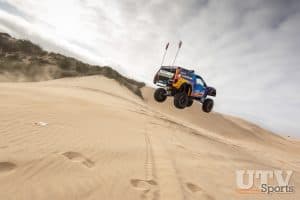