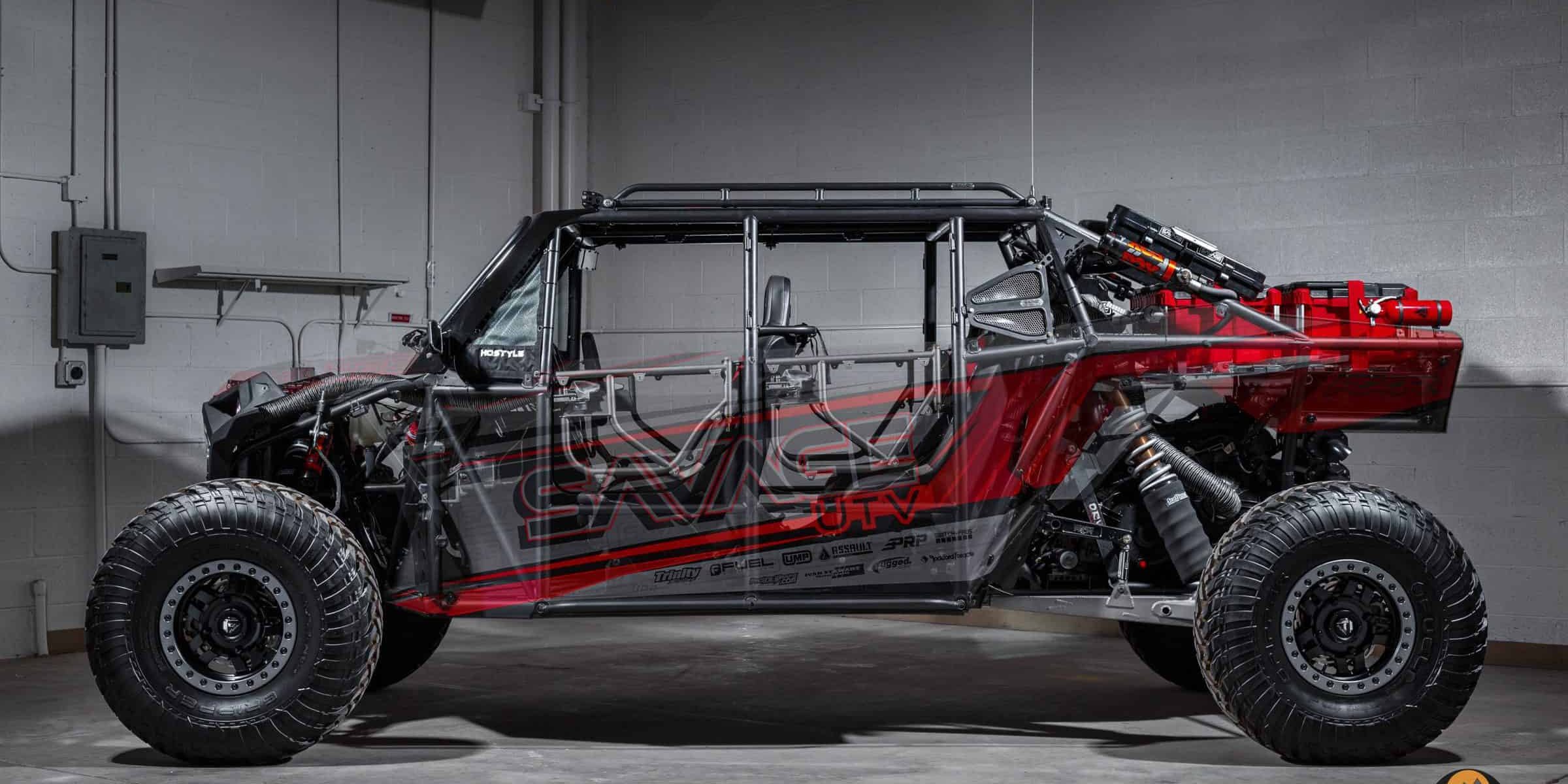 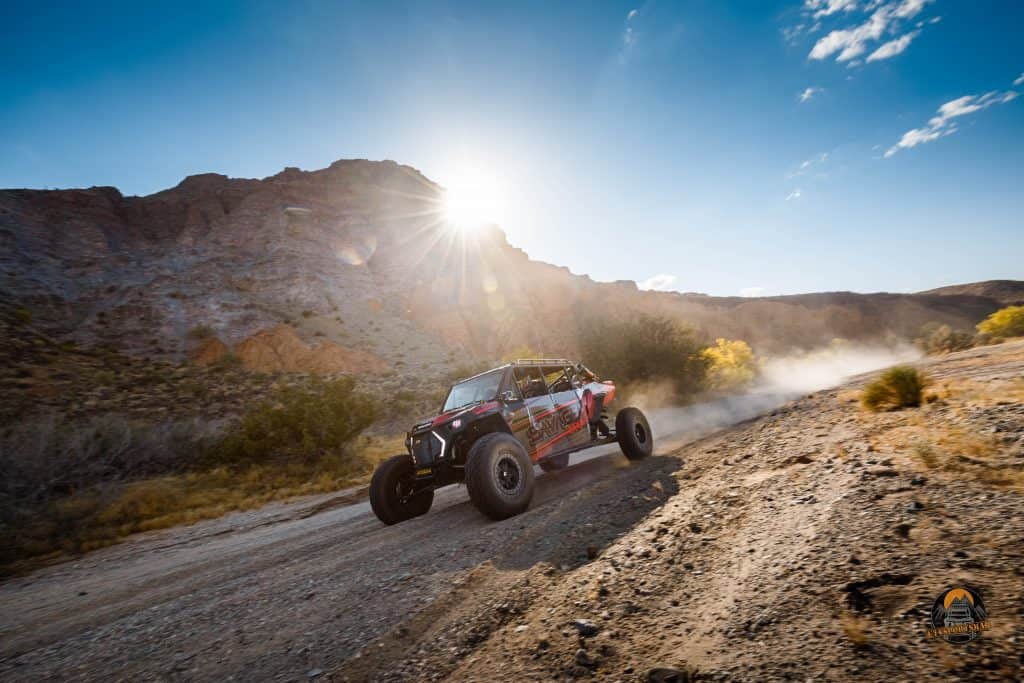 In an industry seemingly booming, new models are getting released by manufacturers on a regular basis, which allows the aftermarket to continue building quality aftermarket parts. Seats, mirrors, cages, almost anything you could ever want to bolt to a UTV and customize it to your personal needs. With all the bases covered, it seems virtually impossible to come out with something new. Something innovative. Something that someone has not done before.

The Spring of 2018 would sprout a new and clean idea that would eventually take the UTV market by storm. Matt Scarpuzzi, a San Diego Fire Department Vet, strapped into his naturally aspirated Polaris RZR as the green flag was about to drop. The SCORE San Felipe 250 is a nasty, rough and tough “sprint” race. It’s not long enough for any real strategy other than going as hard as you can start to finish without breaking your equipment. With only one prior race under his belt and little seat time in a UTV, the newcomer to the sport went out a little too hard, breaking 3 belts in the short 250 miles. Although the race was lost, Scarpuzzi walked away with a lot of knowledge to move forward with.

Spending the next few months researching drive belts, what causes failures, and how to prevent them; all of the research suggested that it was not Scarpuzzi’s driving style that was to blame for the breakage, but the way the spare belts were carried in the car. Spare belts are often thrown in tool backs, zip tied to roll cages, and generally disregarded as an item that can take the abuse. But in fact, it’s a delicate item that needs to be cared for. Using his background as a fireman and medic, Scarpuzzi noticed that the valuable and delicate items on his work rig were stored in individual cases. That led to more research and phone calls trying to find a case that would work for his belts. Coming up empty in his search to protect his belts, The Savage UTV Case was born. The first 12 units were designed, built, and given away to racers. A roll of the dice, but these 12 units given away for free would be crucial R&D to make sure the injection-molded case would withstand the rigors of Baja, and they did. The outside-the-case thinking led Scarpuzzi to bring a new, simple, yet innovative product to a market that was seemingly saturated.

As Savage UTV grew, Scarpuzzi knew it was time to build a vehicle that would turn heads at trade shows and on the trail. He also knew that it had to be very practical and comfortable to prerun races and enjoy the outdoors with his wife and kids. Just like the Savage Case, he took a different approach to this build. He wanted something different, something that would stand out in a sea of “bolt-on builds” as he says. Instead of starting with the purchase of the vehicle he liked the best, Scarpuzzi broke out a blank sheet of paper and a sharpened pencil. This wasn’t to design the car, this was to put his wish list together.

As the wish list grew, so did the need for a bigger and stronger UTV. Wanting the styling and performance of a racecar and the comfort of a play car, the one-off chassis was born and would be home to the Polaris RZR XP Turbo drivetrain. Stretching the wheelbase 12-inches further than a RZR XP 4 Turbo doesn’t sound like a big deal, but the extra length will help provide a more comfortable and stable ride. The 129” wheelbase and 74” wide stance coupled with the comfortable PRP seats and seating position will allow Scarpuzzi to use all 25 gallons in the custom-built fuel cell without comfort issues. His medical background and Baja experience told him the car had to be safe and self-sufficient. Packaging all the tools, spare parts, medical supplies, and equipment one would need for days in Baja with no support would be no easy task. The chassis was engineered not only to take an impact and keep the occupants safe, but it also utilizes every square inch for its cargo, whether that’s passengers or supplies.

When I say every square inch was thought through and utilized, I mean it. A custom sliding tray built into the chassis above the engine would be home to his Off-Road Warehouse tool bags filled with all the essentials for a traill fix. Most trips, the spare tire would sit above the custom sliding tray, but Scarpuzzi built in the option to pull the spare and clip in 2 Milwaukee PACKOUT storage boxes, 2 Milwaukee PACKOUT coolers, or a combination of these items. This adds critical storage for long trips with the family. This is something we have yet to see in any UTV build and we will be stealing the idea for our next adventure build. The bulk of the chassis design and fabrication was outsourced, but that didn’t stop Scarpuzzi from getting his hands dirty. Building the custom roof rack and a lot of the small details in the car, he knows every nut and bolt on the car. This intimacy with the build will pay off when repairs or maintenance are needed. 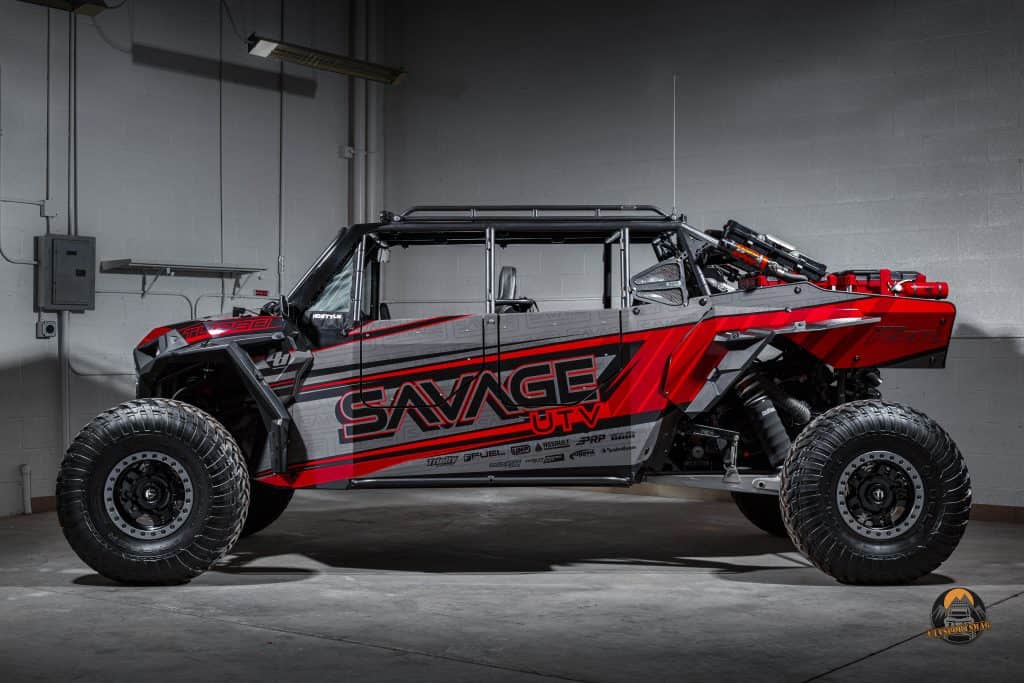 Once the chassis and drivetrain were worked out, Scarpuzzi made, in my opinion, a wise choice. Instead of one-off suspension components, he went with the tried and true Lonestar Racing components. This would allow him to get replacement parts easily and quickly if something were to happen. Connecting the LSR component to the chassis was a set of Fox Shocks with a custom spring rate and valving. The cabin area is littered with subtle details that make this car stand out. From the Baja Designs lighting to the Switch Pros accessory controller to the Assault Mirrors, every square inch was thought out and utilized to suit a specific need.

Sporting 35” Fuel Grippers, this massive build tips the scales at just under 2700lbs ready to hit the trail. The Rhino 2.0 axles and Trinity belt have their work cut out for them but as we know, they are up to the challenge.

All of this outside-the-box thinking with the Savage line of products and the car build is very refreshing in a seemingly stagnant industry. This is truly a “build” and not just bolting on some products, changing some colors, and calling it a build. The time, effort, thought, and money that goes into not only the business but the build itself is truly remarkable. I can only hope that as Savage UTV interacts with other brands, racers, and recreational riders that his fresh perspective will show through, and they too will start to look at things a little more outside the box. 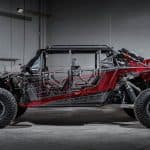 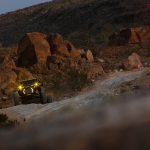 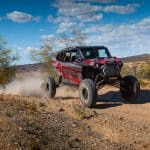 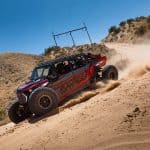 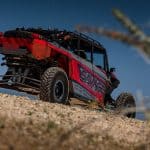 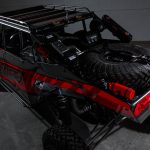 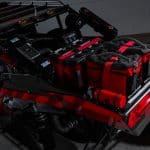 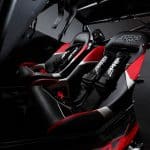 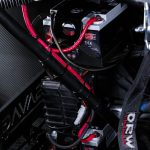