Racers Give No Quarter At Silver State 300 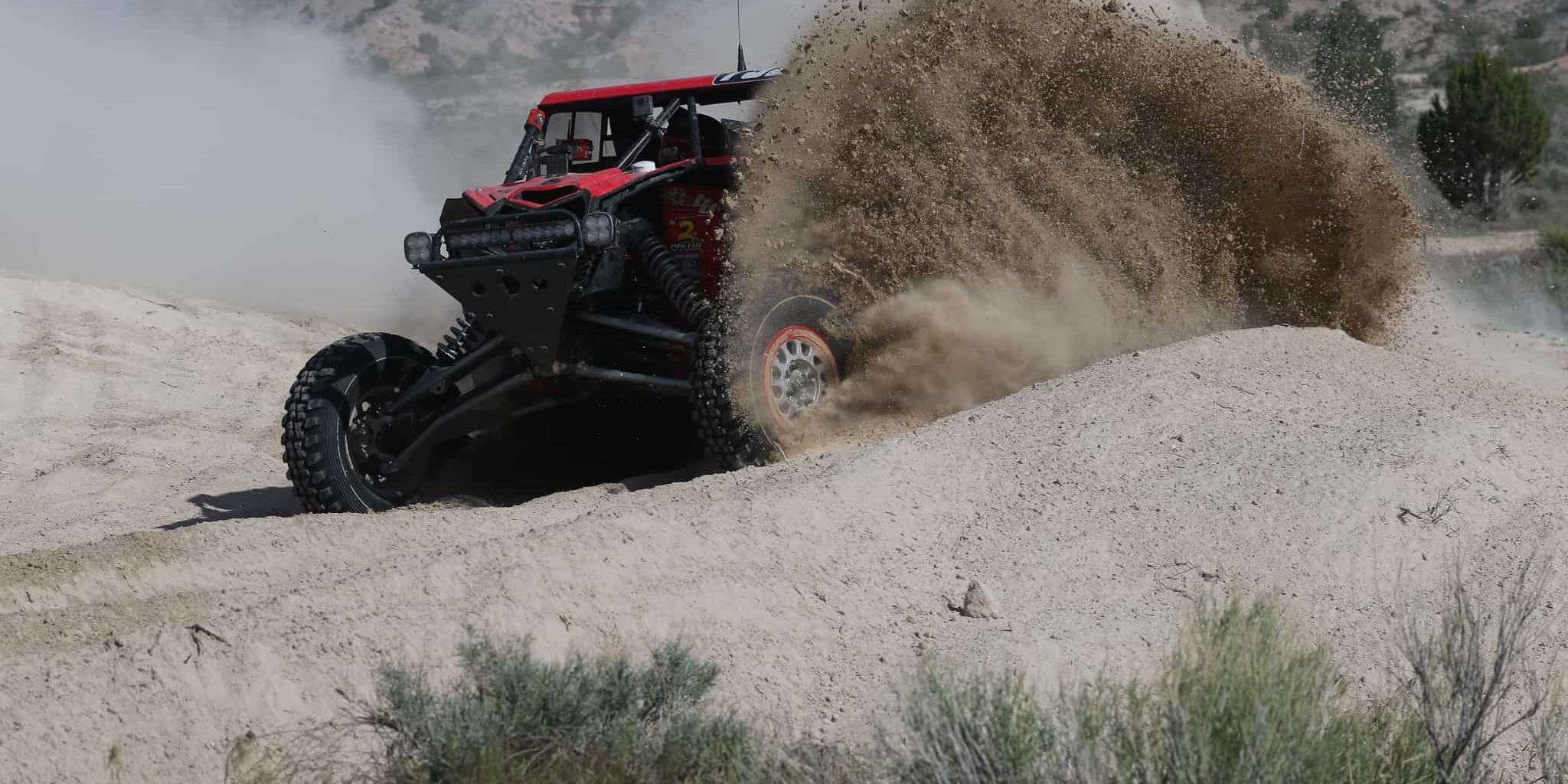 Racers Give No Quarter At Silver State 300

The 4th Contest Sets The Stage For The 2019 BITD Season

The Best In The Desert Silver State 300 takes place in some of the most beautiful country you’ve ever seen. The course has wide open valleys, tree lined mountain trails, and even several water crossings along the way. It’s vastly different than any other race course in the BITD series. There are long, dusty sections where engines are bouncing off the rev limiter, and once into the mountains, the trail gets tight, and super technical. The mountain sections are so twisty that people get motion sickness; especially the co-drivers. They have to keep their eyes on the GPS to call out the turns; all while going up and down, and side to side. There is little margin for error as the cars are brushing the branches while they careen through the trees. A good splash in a cool stream feels great, but if you charge through the water crossings too fast, you can suck water into the engine, or short out your electrical system. Typically a race course this difficult would require some pacing, and a bit of strategy, but from the drop of the green flag, most of the field was going flat out. Those at the front were doing everything possible to check out, and those seeking the front were fighting wheel to wheel. Nobody was willing to give quarter to their competition. 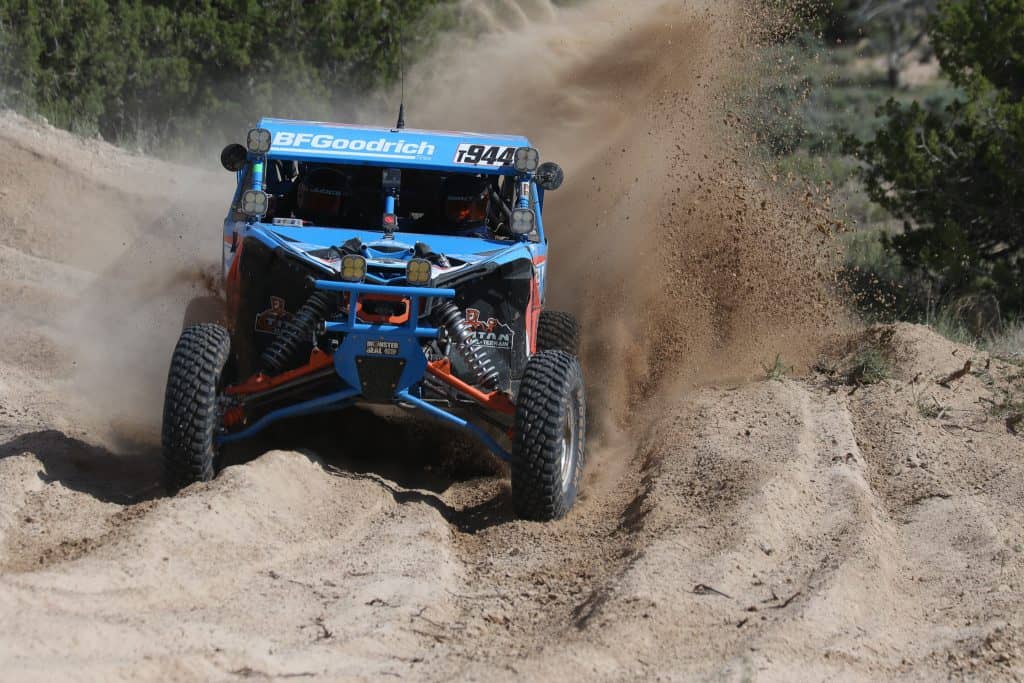 First UTV on the road, and setting a blistering pace, was Phil Blurton. He looked to be running the same pace he did on his way to the win in Laughlin, which was a sprint race. He had a gap on the field at the halfway point, and was running with the 6100 trucks, and class 10 cars. “The 6100 trucks don’t like to let us by,” said Blurton. “They can carry a lot of speed in some sections where we can’t catch them, but when it gets tight, we are much faster. They are hard to pass on the narrow roads, but we can’t just follow them; we will lose time to our competitors. Somehow we found some clean air, and were able to run by ourselves. Beau was doing a great job calling every corner in the mountains, but then he started to feel ill, and started puking. He bounced back pretty fast, and did a great job as usual. The rest of the race went pretty smooth, but we burned more fuel than usual. We had to make an extra stop for a splash to be safe. It’s good to get the win. We started the season off with a bad race in Parker, so we’ve been playing catch up all year. The win put us into the points lead. We have some time before Vegas to Reno so I’m building a new car. It will be a copy of this car, we know it works, but will be nice and fresh.” 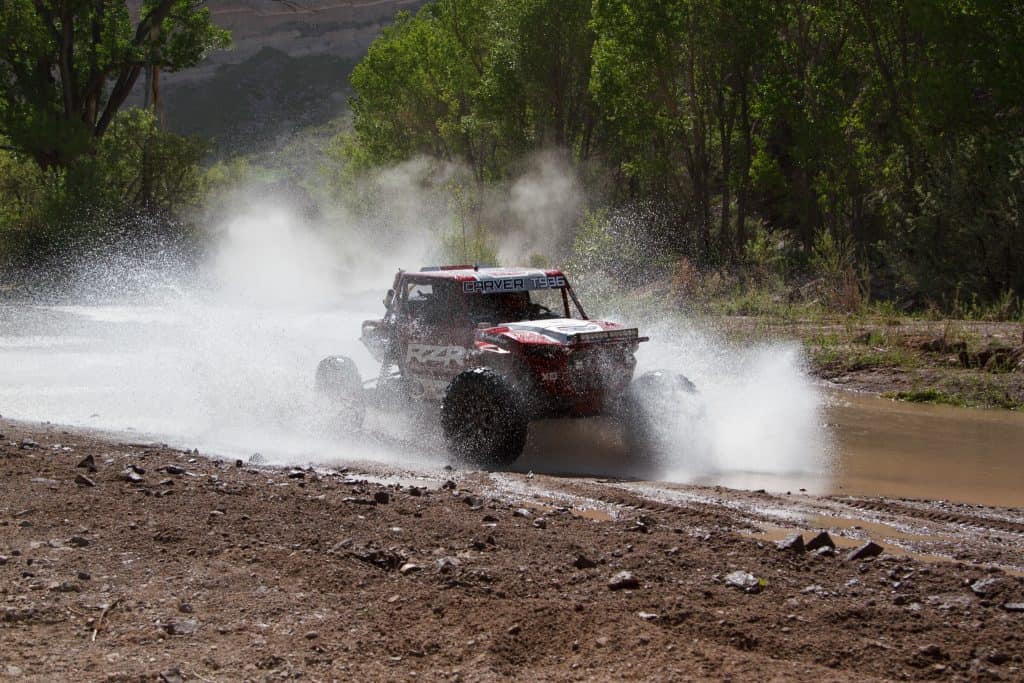 Second place in the turbo class went to Jacob Carver. Carver’s Millen Motorsports built car is a beast. Compared to other UTV’s it’s a monster truck, only it’s not big and stupid. “We had a good race, but it wasn’t perfect,” says Carver. “You really need to be perfect to win. We had our issues, but they slowed us only enough to keep us from the win. We made some clutch changes for the high elevation. The engines are always down on power in the mountains. Off the start, the belt was getting hot so we backed it down a little. It wasn’t a big deal, but then 10 miles in we lost the brakes. The crew was not at pit one; they went straight to pit 2, so we had to limp it along. We stopped in pit 2 and the crew said everything was tight, so we went back out. We were stuck following Dan Fischer. We could close up on him, but just couldn’t pass. The crew got us out ahead of him at pit 5. They dumped 2 cans but were just lightning fast. We got [ahead of] 2 or 3 cars during that pit stop, and it got us around the biggest part of the dust. I passed Sims in the washes where my car is faster. At the next pit he beat us out but I was right on his tail. I was 2 feet off his bumper for a couple miles until he let me by. He figured out I was determined. At mile 225 our brakes were already bad, but then a rock went into the front caliper and then they were just gone. We knew Mitchie was ahead of us so we pushed as hard as we could. We were in some silt which usually causes the belt to heat up, but we were good. We came out of the silt to see Mitch on the side of the course changing his belt. We had a tough time with no brakes but I love that course. It’s really fun, and doesn’t beat you up like a typical desert course.” 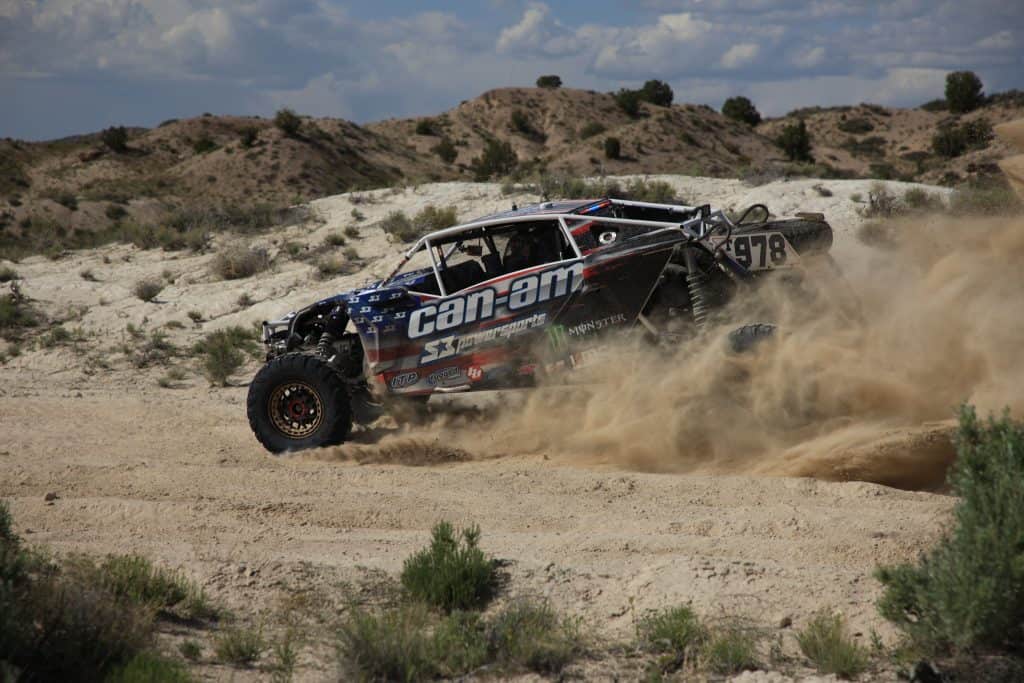 Third place went to a hard charging Dustin Jones. Jones makes no bones about it; he’s a checkers or wreckers driver. He’s out to win every time. He started 23rd and climbed all the way up to the lead pack. He was 6th across the line, but his time was 3rd fastest. “That course was so fast,” said Jones. “The cars are kind of sluggish in the high altitude, and the belt temps run higher, but we managed to keep a good pace. We stopped in pit 2 to change the belt. The guys did it so quickly, but we still had to get back a couple spots that we lost. We were behind the Murrays for a long time, and the dust was so bad. The course is really fast but there are lots of rocks and trees on the sides. We made up our time in the mountains. Coming from back East, and racing a lot in the woods, we are used to dodging the trees. Believe it or not, I was getting queasy in the mountains a little but my co-driver Dustin Henderson has an iron gut, he was fine. We had one moment when we went wide in a turn, and there was a ditch. We started sliding into the ditch and there was a Trophy Truck down there. Those guys looked up and started scrambling, but we were able to make the turn and climb up out of there. Otherwise it was a really fast, really enjoyable race.”

The production class had an incredible battle between Seth Quintero, and Mike DeLey. Quintero eventually came out with the win, but the two were going back and forth, even banging doors during the race. We can state with complete journalistic integrity that Seth Quintero is amazing. He’s gone 4 for 4 in the BITD series this season. He may look the part of a high dollar team, and he has RedBull on his car, but he’s only 16 and does all the work on his car in the family garage. We don’t like to brag, but Seth was the very first UTV Sports Magazine ‘Little Ripper’; our ongoing series that highlights up and coming talent, and he has proven that he deserves that title. “We had a great battle with Mike DeLey,” said Quintero. “We gave our all and were able to get our 4th straight win. I was going full out during the race when DeLey blew past me on a fire road. We came to a silt bed and I guess there was a danger there. We don’t have a GPS, and I was in his dust, so I didn’t see it. He checked up for the kicker and we went flying past him. We made contact and it ripped my nerf bar off the side. When I left pit 6, I was twenty seconds behind him; so I knew we had to put time on him. My Polaris felt like it was on rails, but there was no more to give. We won by about 30 seconds.” 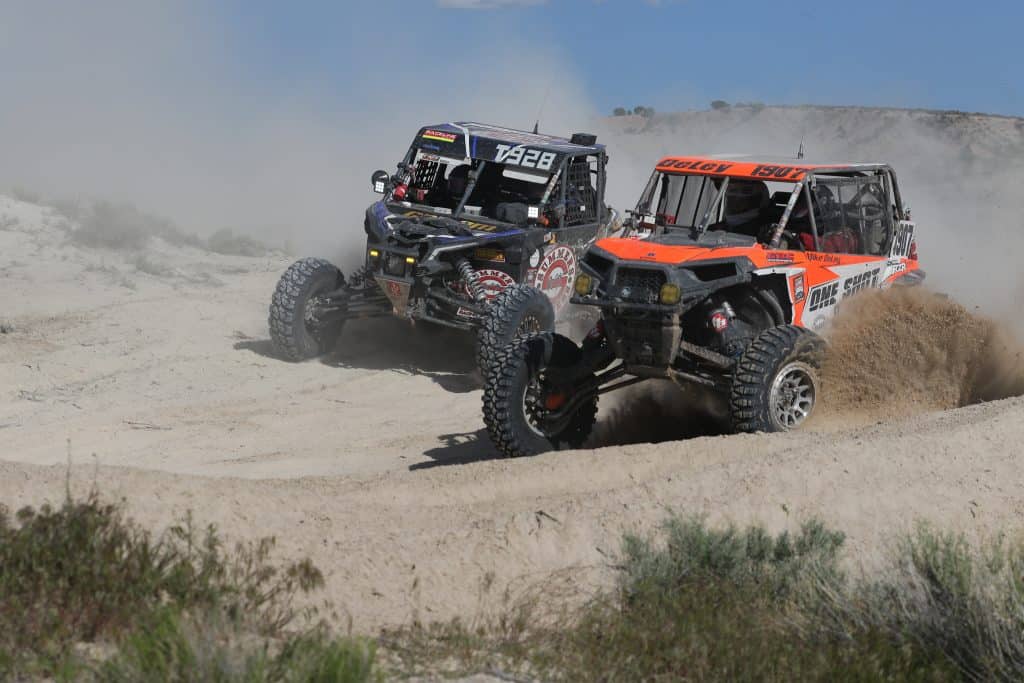 DeLey also enjoyed the race. He gave due respect to Quintero, but he was right there in the mix. “We didn’t end up where we wanted to, but it was a close race, and a great battle with Seth,” said DeLey. “Seth pushes the bar high. We need to work on our pit stops. The crew got some chatter on the radio and thought that we needed a tire. They started to pull a wheel off until I stopped them. We lost some time there. It used to not make a difference. We would stop a couple times, it only takes a few seconds, but now that we are fighting for the lead, we need to cut every second possible. We will be ready for Vegas to Reno. I’ll be sharing the driving with my co-driver Corbin Leaverton this year. We will be pushing hard to the very end.”

Dan Kaatz had a great race as well to round out the Production podium in third place. 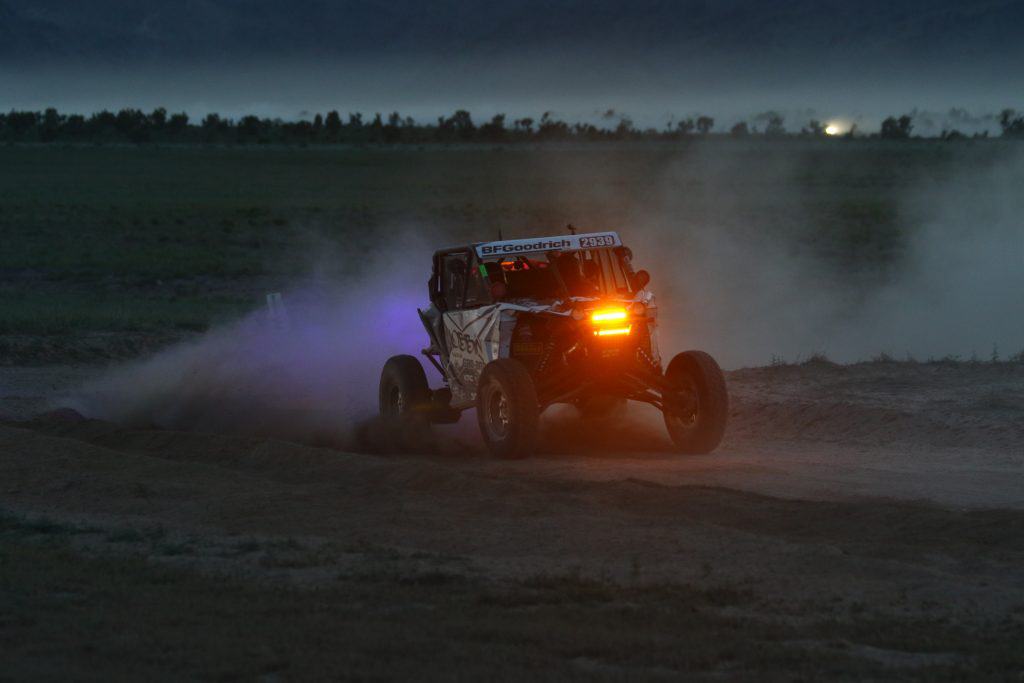 In the Unlimited UTV class, Michael Isom brought home the victory. “It was a ton of fun. I love that course; it’s one of my favorites,” says Isom. “We did a lot of prep on the car, and we went on the prefun run. It was dusty. We had to fight through the Trophy Lite trucks. It is a beautiful area in the pines, and at the water crossings. Then you go back down to the desert. It’s a co-driver’s race and my Co-driver James Konces did fantastic. During the pre-run I was able to ride with Phil Blurton, my car’s builder. I was able to get a feel for how he drives and I learned I can drive the car a lot harder. I need to push beyond my comfort level. We like that we are getting so competitive, but we still like to have fun.” Isom shared the podium with Josh Shelton in second, and Craig Johnson in third. 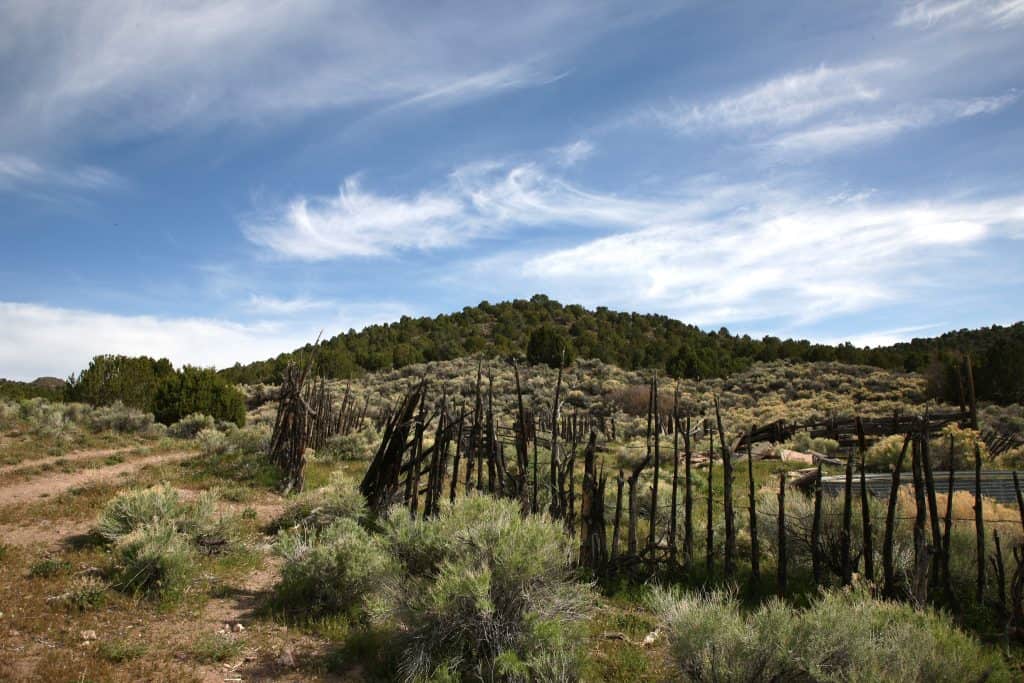 The Silver State 300 has some spectacular scenery, but the drivers didn’t dare sneak a peek. It’s a high risk race, but also had high rewards. For Phil Blurton, it marked the point where he crawled back from a disappointing race at the season opener in Parker to take the points lead. For Seth Quintero, he got his most serious challenge to date from Mike DeLey, and still came out on top. There is a short hiatus until Vegas to Reno in August, as the desert is just too hot for a couple months. Racers there will have even more high speed running as they take on the longest offroad race in the United States, a torture test that spans well over 500 miles. By the looks of how fast everyone is running, it might just turn into a sprint race as well. With the level of competition we’ve seen so far in every class, it’s going to be an amazing outing to watch. 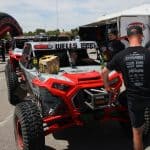 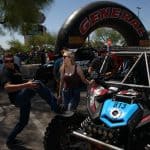 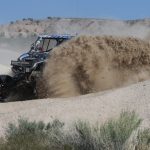 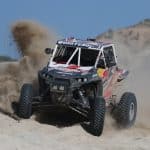 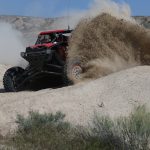