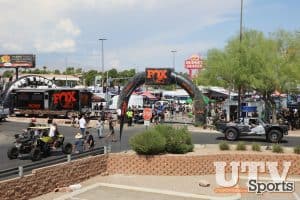 When you are racing the longest offroad race in the United States, Best In The Desert’s Vegas to Reno, you can expect that even the best laid plans might not work out. After all, there are a million things that can go wrong during the race. The course is punishing, with dust, rocks, and silt that stretches on forever. The sun was beating down on the seemingly parched landscape, but there were also powerful rain squalls that seemed to pop up out of nowhere. The downpours created instant mud holes, and turned the dust in the air into slime that covered helmet visors and everything else. Long stretches of fast, flat out roads, were mixed with technical sections that could catch a driver off guard. Just finishing all 530 miles was a task, but you also had the fastest UTV racers in the world, all fighting for the top of the podium.

Everything seemed great for Phil Burton before the race, he was leading the points chase and had a top starting position. He won Vegas to Reno (V2R), last year so he knew the challenges, and how to overcome them. “We were in a newly built car, but we had done a lot of testing with it,” says Blurton, “While others were taking their vacations, we were working twice as hard. Not only did we run 500 miles of non-stop testing in the heat, but the crew spent time practicing our pit stops too. It has become so competitive that shaving even a few seconds off your time can be the difference between a win, and second place. Our plan was the same as last year; get out front and maintain the lead.” 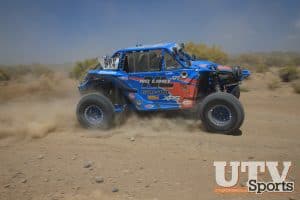 Unfortunately for Phil and his co-driver Beau Judge, they had a mechanical issue at race mile 8. It was a simple fix, but the car was so hot, it took 20 minutes to do it without getting burned. They dropped from 2nd place to 40th position. “We were playing catch-up all day,” Blurton continued, “The dust was thick so we had to take some chances. We passed 25 cars battling wheel to wheel, and the rest we got around while they were in the pits, or changing flat tires. We stopped three times but never spent more than 30 seconds in each pit. We like to run at around 60 percent and have extra in the car to give. We had to run at 80 percent, all day long. At our last pit they told us that Carver was 1 minute ahead of us. We needed to catch him, make the pass, and then put 3.5 minutes on him to win.” 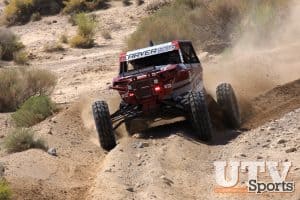 That’s just what they did. They caught up to Carver while he was trying to pass a class 10 car. The car kicked up a huge rock that struck Jake in the right front wheel, damaging it. “We saw amber lights coming and figured it was Blurton,” said Jacob Carver, “We had the lead and were trying to drive smart. We knew that even if he passed us, we just had to follow him in and we would still beat him on time. The last miles are very rocky. We tried a couple times to pass a 10 car but had to back off due to the rocks. There was a spot where the rocks were not as bad so we took another shot. We went right back into the rocks and the 10 car kicked a huge one back at us that hit the front tire. It made the worse noise in the world. It was clanking and rubbing. It broke the inner rim off the center. We had some trouble in the dark but we got it changed. Our tracker was off all day and we had no comms with our team there so we thought we had 30 more miles to catch back up to Blurton. We had already raced over 500 miles and I was hoping it would go longer. We took off and found out we were only 2 corners from the finish. We found out after that we were at mile 524, not 500 like we thought. We thought it was going to be a flawless race and a win.” 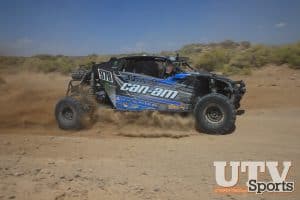 While Jake Carver had some bad luck, third place Turbo class finisher Dustin Jones finally got the V2R monkey off his back. In 2015, he was leading the race in the final miles when a rock sheared off the oil drain plug. By the time the oil pressure dropped, it was too late for the motor. In 2016, he debuted a beautiful new car but got into a multi-car pile-up in the first few miles caused by blinding dust in a silt bed. That car was totaled. In 2017 he finished lucky 13th after 14 hours of racing. “After 3 years we finally shook off the curse,” said Jones, “We started 48th so our goal was to just make it to the finish in 1 piece. We were not even concerned about what position we were in, we talked about just keeping the wheels turning; we didn’t expect a top finish. We caught a lot of cars and probably pushed harder in the dust than we normally would. It wasn’t until pit 13 when I asked the crew where we were running. They said we were 5th. I told Dustin (Co-driver Dustin Henderson), that nobody remembers who finished 5th, and we turned it up. We had 130 miles left, and we climbed up to 3rd. We usually like to get out front, and then back it off a little. This time we were driving miss daisy all day and then went all out at the end. It was a totally different approach for us. We had to pass a lot of cars and the push to pass button got worn out. We nicknamed it the jackrabbit box. You push the button and the car ahead jackrabbits. It was a tough race but the car is still fresh and strong.” 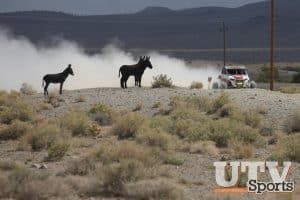 John Melvin also had problems passing during the race. He was going around a slower car when they came down on him and ran him off into a ditch. “We hit a one foot tall square edge; it broke the shock eye off the shaft,” said Melvin. “I run a collision center so our car is freshly painted for every race. (The car always looks show worthy) I guess they thought we would just back off, but I’m not afraid to mix it up. We got the worst end of it this time. We made it to the next pit and found a shock that would bolt up. It was a long day, but we didn’t quit, and made it to the finish.” 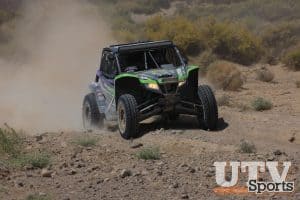 In the UTV Pro class for naturally aspirated cars, Ray Bulloch took the win, his first in the Textron Wildcat. “We had an awesome race,” said Bulloch, “We have been getting the little bugs out of this new car; our race went perfectly to the plan. We changed one belt and cracked a wheel on a big rock but otherwise it was flawless. I am blown away by how well the car worked all day long. There are not a lot of aftermarket parts for the Wildcat. The car we run is almost stock. We are running the factory suspension and Fox shocks. We worked with the Textron engineers to get everything dialed in. They had a solution to all our issues. In the tight and rocky sections, we had better speed than the other cars. Our plan was to win. Once we got in that winning mindset, our plan came together. We just nailed our set-up. Textron’s goal was to build a car that is easy to work on and simple to adjust. It’s a really well thought out design. I think as more people get their hands on these cars they will love them. We could not be more proud of the win!” 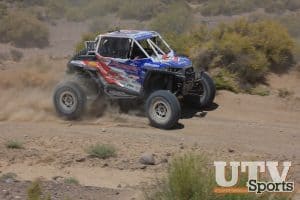 2nd place belonged to 15 year old Seth Quintero. Since moving into the BITD series this season, Quintero has already made a name for himself. It was his second runner up finish; he has several top 5 finishes. “It was our first Vegas to Reno so we were not sure what we were up against,” says Quintero, “Our plan was to take it easy and see what pace the leaders were running. We had a tough time getting around some of the trucks. We were stuck behind a 6100 truck for about 30 miles. I don’t like to nerf anyone; I prefer to be smooth and fast. We have come close, but I’m ready to get on the top of the box!”

The competition better watch out. The next race in Laughlin is a night race, and Quintero goes even faster in the dark. He was 46 minutes behind the leader at V2R when the sun went down. At the finish, he cut the deficit down to 18 minutes. 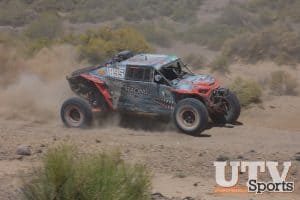 3rd place was earned by Kaden Wells. He started 3rd but dropped back when he suffered issues due to the heat. “Our clutch got real hot,” said Wells, “The temperature climbed to 360 degrees so we changed it in the pits. After we changed it out, it started getting hot again so we stopped and pulled the cover off. I was trying to make up time and got a flat. We dropped back to 15th. Then we settled into a good pace and worked back up to the front. At mile 450 I started to get sick; I was too busy to eat all day. I had to get out of the car. Once the sun went down, we got faster. Our tracker wasn’t working so it was tough making passes.”

In the Unlimited class, Michael Isom picked up another win with Peter Carr finishing second and Hans Luenger was 3rd. As usual, Vegas to Reno was a tough race that kept everyone on the edge of their seats. Several super-fast racers looked to be in contention for the win, but it didn’t take much of a problem to get dropped by the lead pack. While some were able to dice their way through the pack, others were mired in traffic. One of the reasons why desert racing is so rewarding is that it’s so darn hard, but the competitors would not have it any other way.