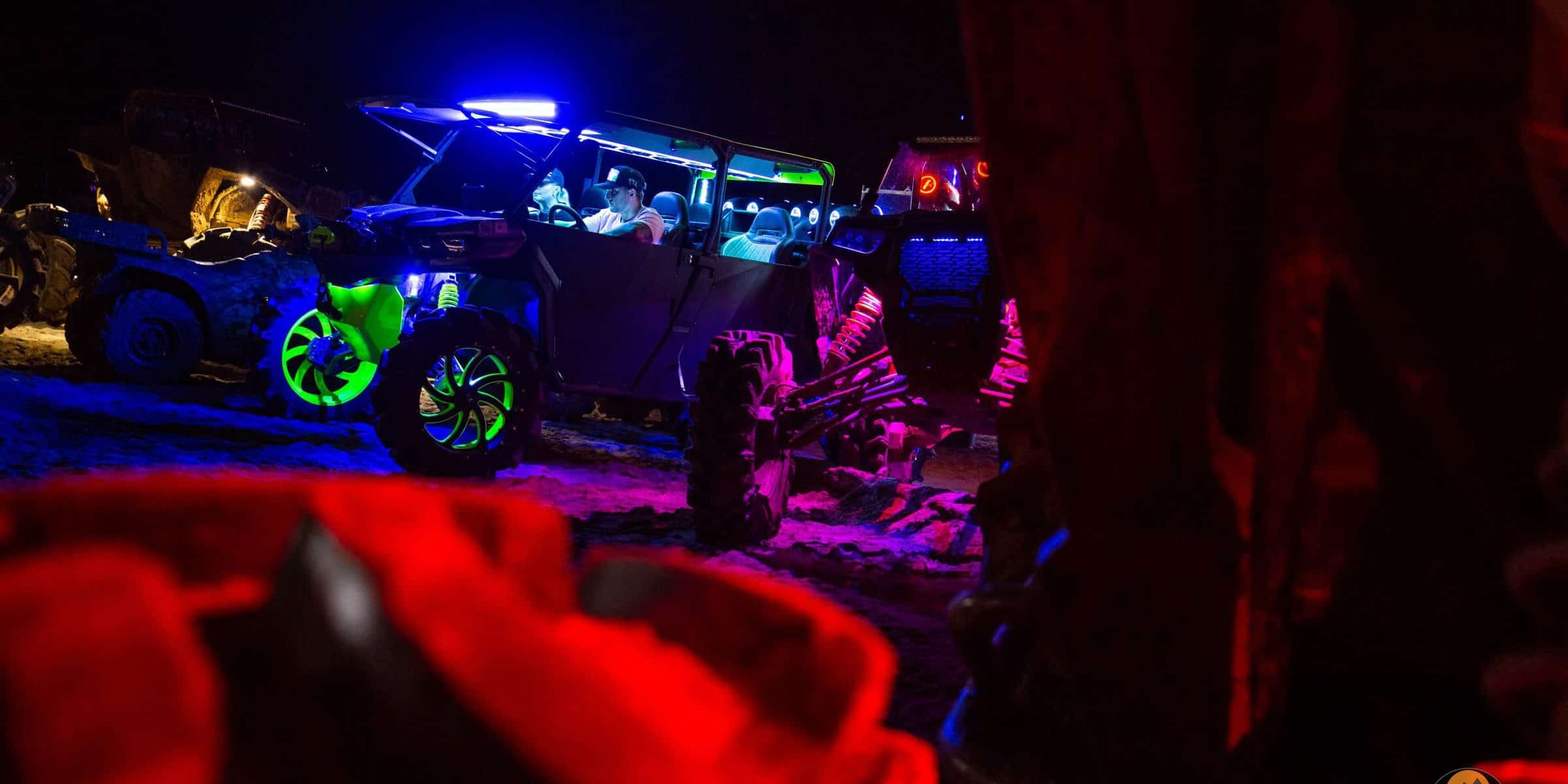 Bringing A Little Muck Into Perspective 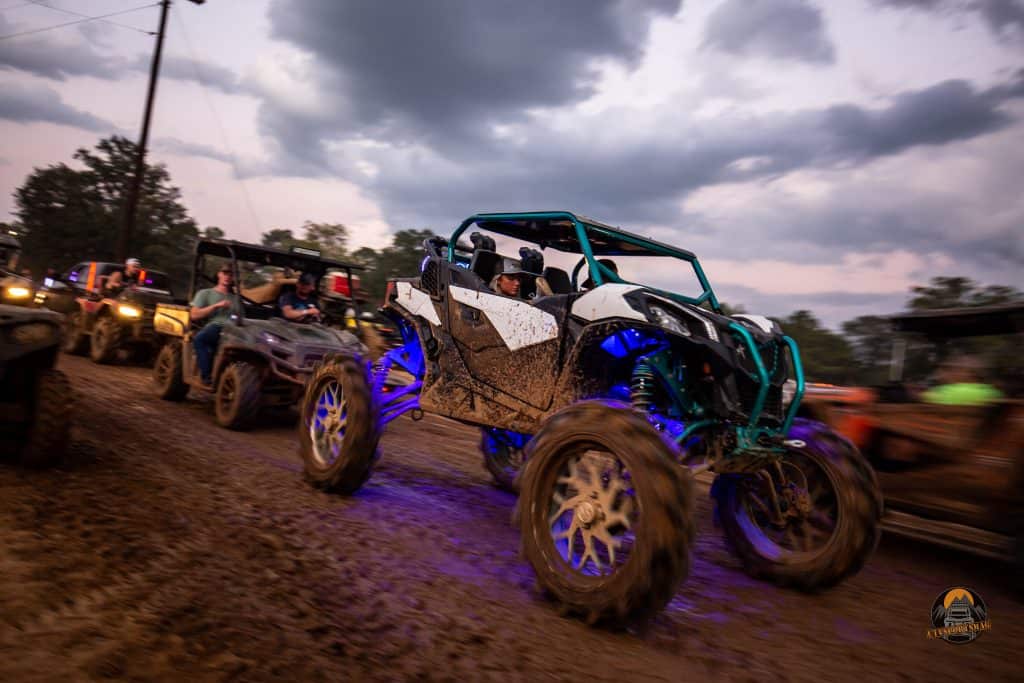 One of the notable reasons people travel is for the sake of learning. They want to experience something unknown and leave with a new understanding of the world we walk. As a resident of Flagstaff, Arizona, often called “The City of Seven Wonders,” and a junior in college, it would be safe to assume I’m ripe with ambition. The only assumption second to that would be that I love to travel. If you guessed either, give yourself a pat on the back. I have definitely done my fair share of traveling around the world and have immersed myself in some very different ways of life. With my prior travel experience, I thought a journey with the crew to Texas would be a walk in the park⁠—a sentiment soon to be proven wrong. Enter Mud Jam 11 at River Run ATV Park in Jacksonville, Texas. I had no idea of the massive culture shock that I was about to experience.

Mudd Jam is a multi-day event that brings together outdoor and mudding enthusiasts from all across the country to indulge in the offerings of the River Run ATV Park. Located on the beautiful Neches River, west of Jacksonville and southeast of Frankston, folks gather together to watch very unmistakable UTVs race through small mud-filled courses, enjoy delicious American-style food from colorfully labeled trailers, explore different vendors, and check out all the different products they have to offer. Scattered throughout the area are many fun activities for the entire family such as extreme mud riding, dry trail riding, mud pits, and scenic views of the Neches River and mountain area of Big Rock. All of which, visitors have no problem getting down and dirty through it all.

On a seemingly normal Thursday, traveling from Las Vegas, Nevada, with a layover in Dallas/Fort Worth, we landed at our destination in Tyler, 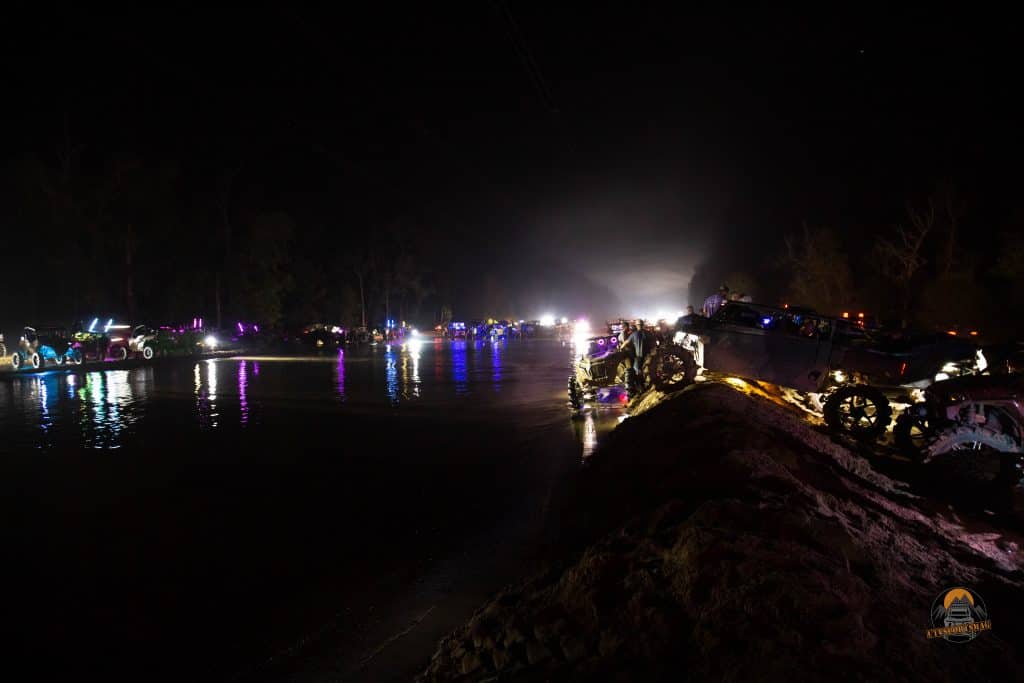 Texas. Right away, I could tell that I was in a completely different part of the world than what I had ever been used to. From the trucks lifted to absurd heights, the medium-sized soft drinks that you could barely hold with one hand, to the pride of those who walked its streets, it quickly became apparent to me that everything was indeed bigger in Texas.

All I wanted to do was get straight to the main event, but there was much work to be done before we could go get muddy. Our first days were spent from dusk till dawn in the TCP Off Road garage. We showed up with a Can-Am and a trailer full of parts, and by the time modifications were complete, it was like nothing I had ever seen. This car, or as Texans like to call it, bike, stood three feet taller than what it was when we showed up. At a whopping seven feet tall and equally as wide, I was at a loss for what terrain could possibly require such modifications. By far, it was the first UTV that I have seen with such an immense footprint and stance, as I am used to the typical low center of gravity cars fitted for desert racing in the Southwest. I was positive that this car would be the biggest I would see all weekend… boy was I in for a surprise.

We arrived at the 2,000 acre River Run ATV park around midday on Saturday, and my ignorance of what I consider “big” for a UTV was immediately apparent as we watched many roll by whose skid plates were as tall as the roof on our Can-Am.

Once we got all settled into our day camp area, we headed on over to the main event which was the bounty course. Drivers raced through a small course filled with mud holes, tight turns, steep hills, and tire mountains. Much different than the high-speed racing in the terrain of the dry Arizona deserts. I couldn’t count the amount of times they had to roll out the excavator to pull out cars that had flipped over or broke who knows what on course. But that was all part of the fun. My jaw dropped as I watched the crowd roar that ensued from all the carnage, all while our media crew worked tirelessly to capture every instance of the endless excitement and adrenaline. 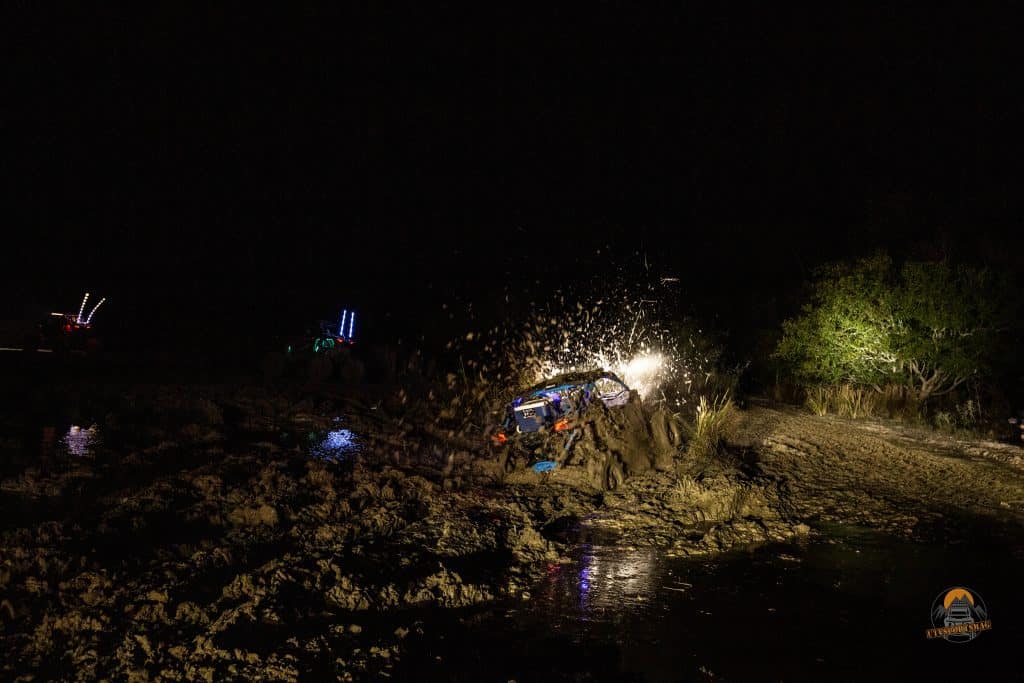 After hours under the sun, we headed back to our cabin to recharge and rest up before nightfall. We ate some very tasty grub from one of the food trucks and spent some time wandering around the mud, checking out all the crazy builds, vendors, and features that were scattered across the park. River Run is set up with all the vendors in a cleared-out strip down the middle, with a plethora of trails, ponds, and forested land surrounding the main event/social area. There was never a dull moment at Mud Jam, especially the attention our camera crew got trying to catch all the best moments. Having our plethora of high-end camera gear at the event, we had high spirited folks swarming all around us, trying to get their ride in the spotlight, all waving and smiling.

It felt like the entire event changed once the sun started to go down. It wasn’t long until all of River Run was transformed into a forest of color with hundreds of LED whip lights, lightbars, and rock lights racing around us, complemented with ground shaking stereos and thundering exhausts. I was in awe to be immersed in a place covered with dirt and mud, that was at the same time so strikingly beautiful.

We gathered everyone up and rode over to Highline; an expansive area with a series of big mud pits, rimmed with UTVs and people all hanging out and living their best life. Everyone there was able to freely ride through the mud and test their driving skills, which went smoothly about half of the time. Just about every time I looked around, someone was happily getting stuck in the mud, as if they were aiming to do so. As soon as a UTV looked like it was about to flip over or come to a halt, people flocked in from every direction to help, hooking up their winches and trying to get the vehicle back up and moving. It really warmed my heart to be surrounded by people that wouldn’t think twice to get down and dirty just to help out a random stranger. 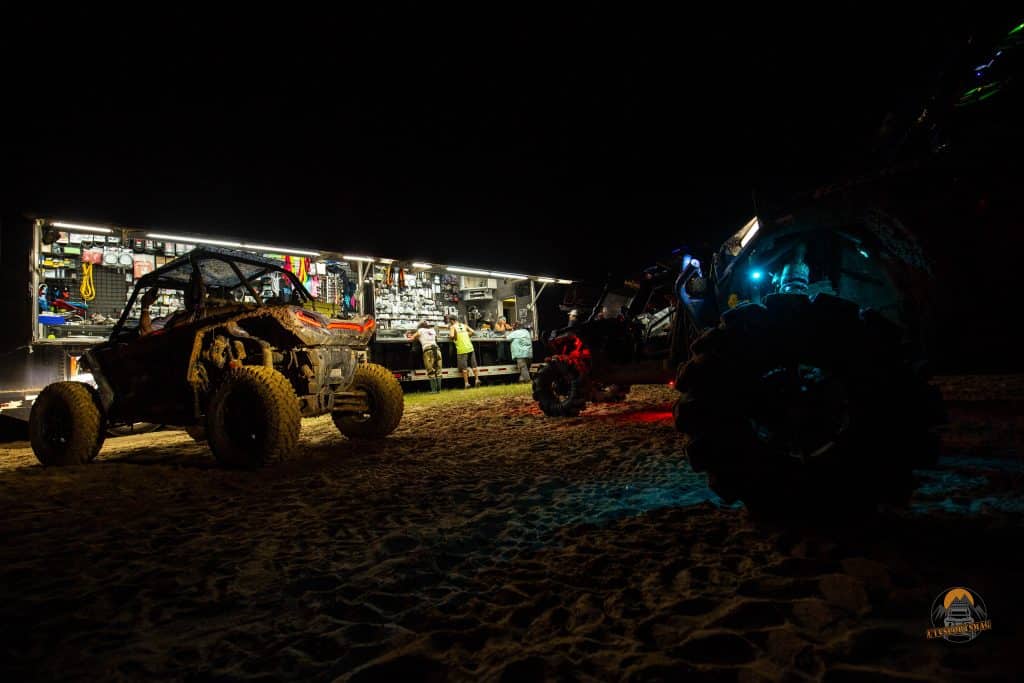 I was able to stay relatively clean throughout the event, up until some of the guys put me on one of the cars and made me go through the mud. I was quite timid at first being in such an unfamiliar situation. But, I quickly grew out of my comfort zone and instantly felt like a celebrity in the middle of a paparazzi attack with all the high-beams and lightbars pointed at us. I may not have had the sharp hairdo and clean tuxedo, but I’d like to think I still looked pretty dapper.  Our first pass through was easy enough, and we got out without any struggle. I felt relieved… That is until I realized we were going back in for another run. This time things did not really go as planned. We got to the deepest part of the pool (which was about 7 feet deep) and forward momentum ceased, instead we were leaning over to the right. As if it was instinctual, all the passengers hopped out and got right to work, and more “bikes” instantly surrounded us to help. I was in the back of the bike with mud coming up over my legs, trying to counterbalance the now sinking UTV.  Turns out one of our front wheels over-rotated and was perpendicular to the side of the car, which would explain why we weren’t moving at all. Two bikes pulled us out; one attached to the bent-out wheel pulling us forward, and the other hooked up to the left side of the car, trying to get us level. We finally managed to get out and back with the rest of the crew, and by the end of it all, I was covered head-to-toe in mud. My ear-to-ear grin spoke for me, as everyone came up to give me high fives and ask what it was like. 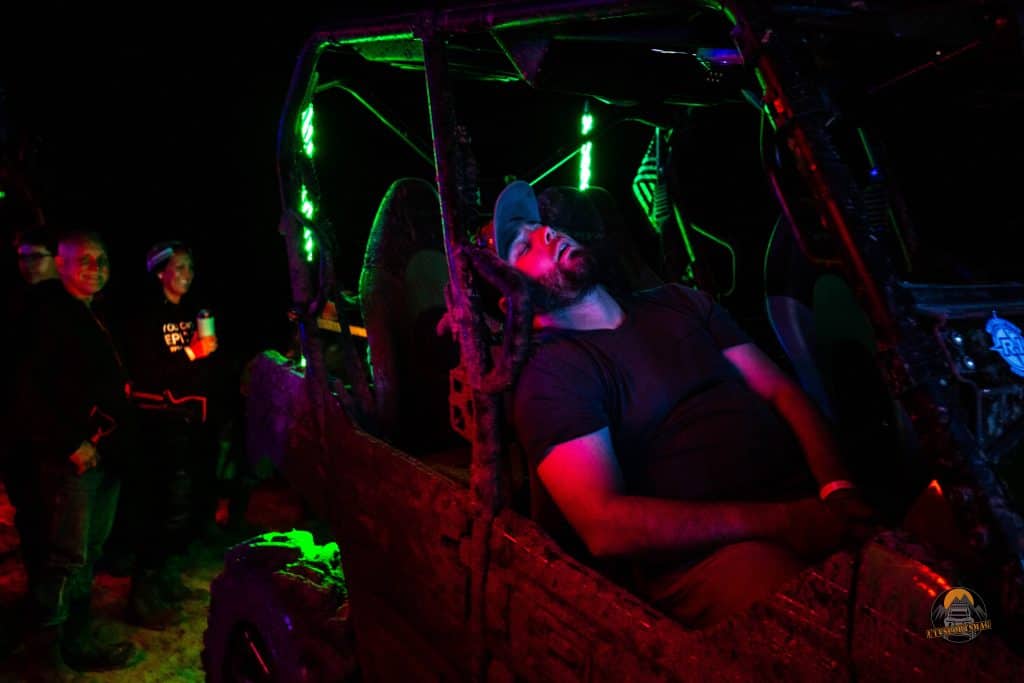 The rest of the night was history, but I will never forget my first trip to Texas and my experience in the mud. Till next time Texas. Don’t you worry, I’ll return soon enough to get back and sling some muck.