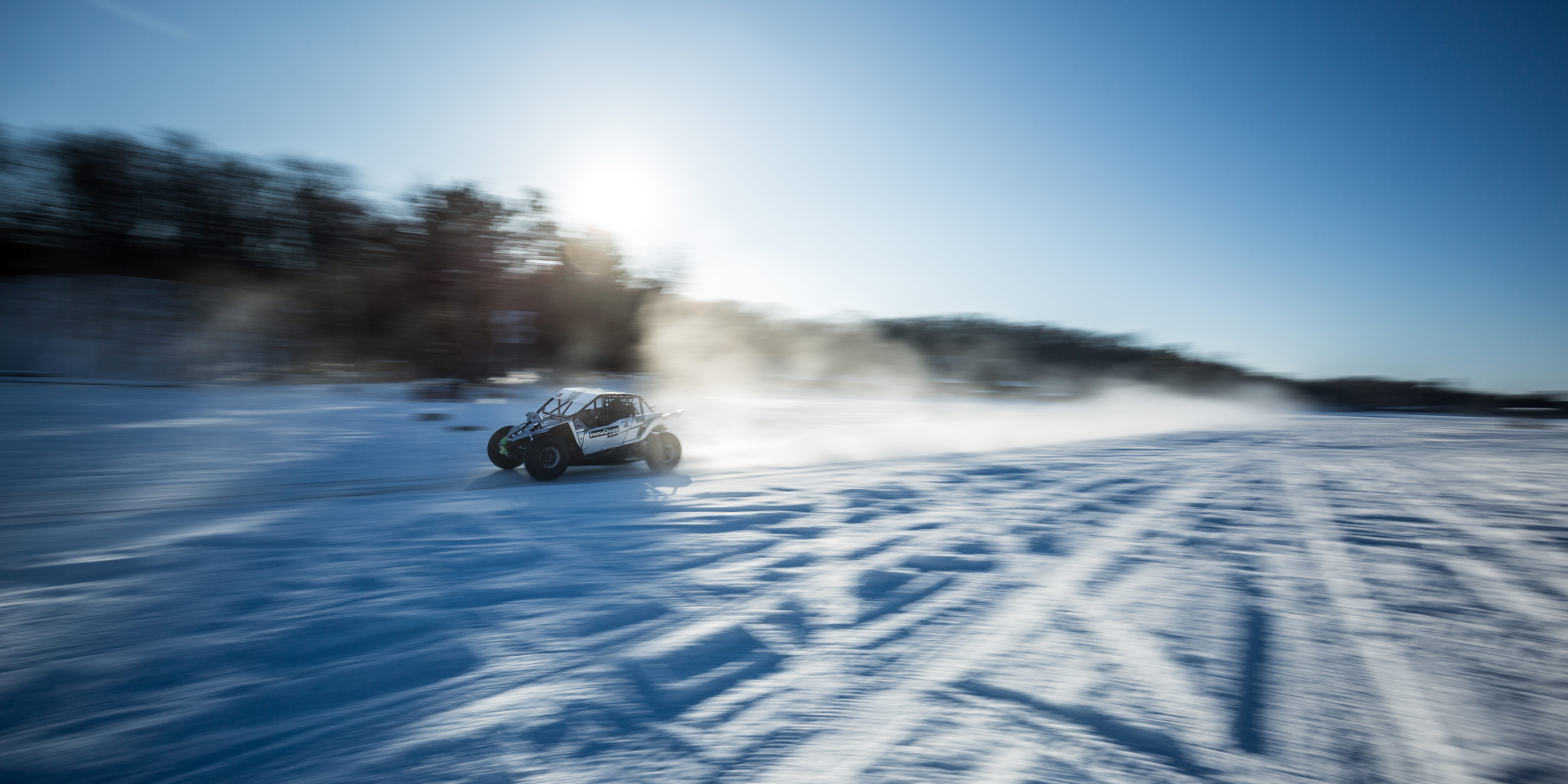 See the original Iceman 500 article in the March 2018 Issue!

Story and Photos by: Brandon Bunch

“…Blue skies and a high of 6 degrees…” the pilot announced as my flight descended into Minneapolis. I was nervous. Having grown up in the desert, I can stand the heat, but freezing cold temperatures was not something I was comfortable with. The idea of walking around and shooting a race on a frozen lake for two days, with temperatures dropping into negative numbers, honestly scared the sh*t out of me. As nervous as I was of the cold though, I could barely contain my excitement getting off the plane to start my drive to Balsam Lake, Wisconsin. I mean come on, how could I not be excited heading to a 100+ mph, five hundred mile long UTV ice race? 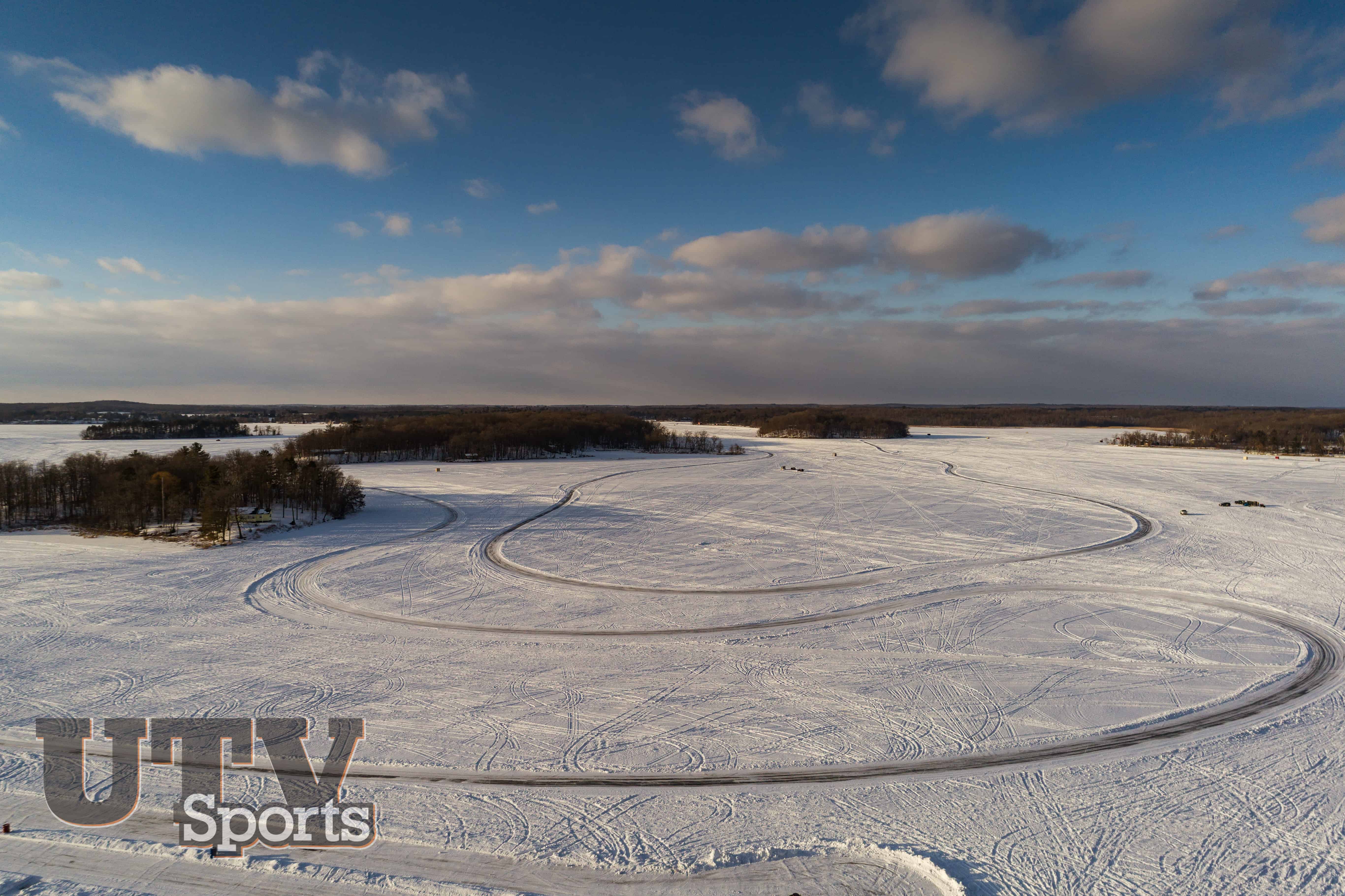 The Wisconsin-based Iceman series of snow events all started with Tom and Rob Carlson. They grew up in Balsam Lake, and their father (Robert J. Carlson, aka RJ) worked for John Deere back in the 70’s when they actually produced snowmobiles. RJ headed up their snowmobile racing efforts, leading a team by the name of Enduro Team Deere. They had quite a bit of success in the mid 70’s, and RJ decided to start up a cross country snowmobile race in his hometown, called the Balsam Lake Classic. By the third year they had over 500 snowmobiles entering the race to compete for a $10,000 winner-take-all purse. Obviously growing up with these experiences planted a seed, because fast-forward to 2016 and you’d find Tom and Rob studding the tires of their UTVs and heading out onto the ice, all in the name of fun, and to see what these machines were really capable of. Normally in this part of the country, racing for almost everything stops during the winter time. It’s the off season for short course racing, and most of the local racers are spending their time preparing for the next season, often just sitting in their garages, anxiously waiting to get behind the wheel again. The fun days spent on the ice with their UTVs sparked an idea for the two brothers. If just playing around on the ice was that much fun, why not put on a race? 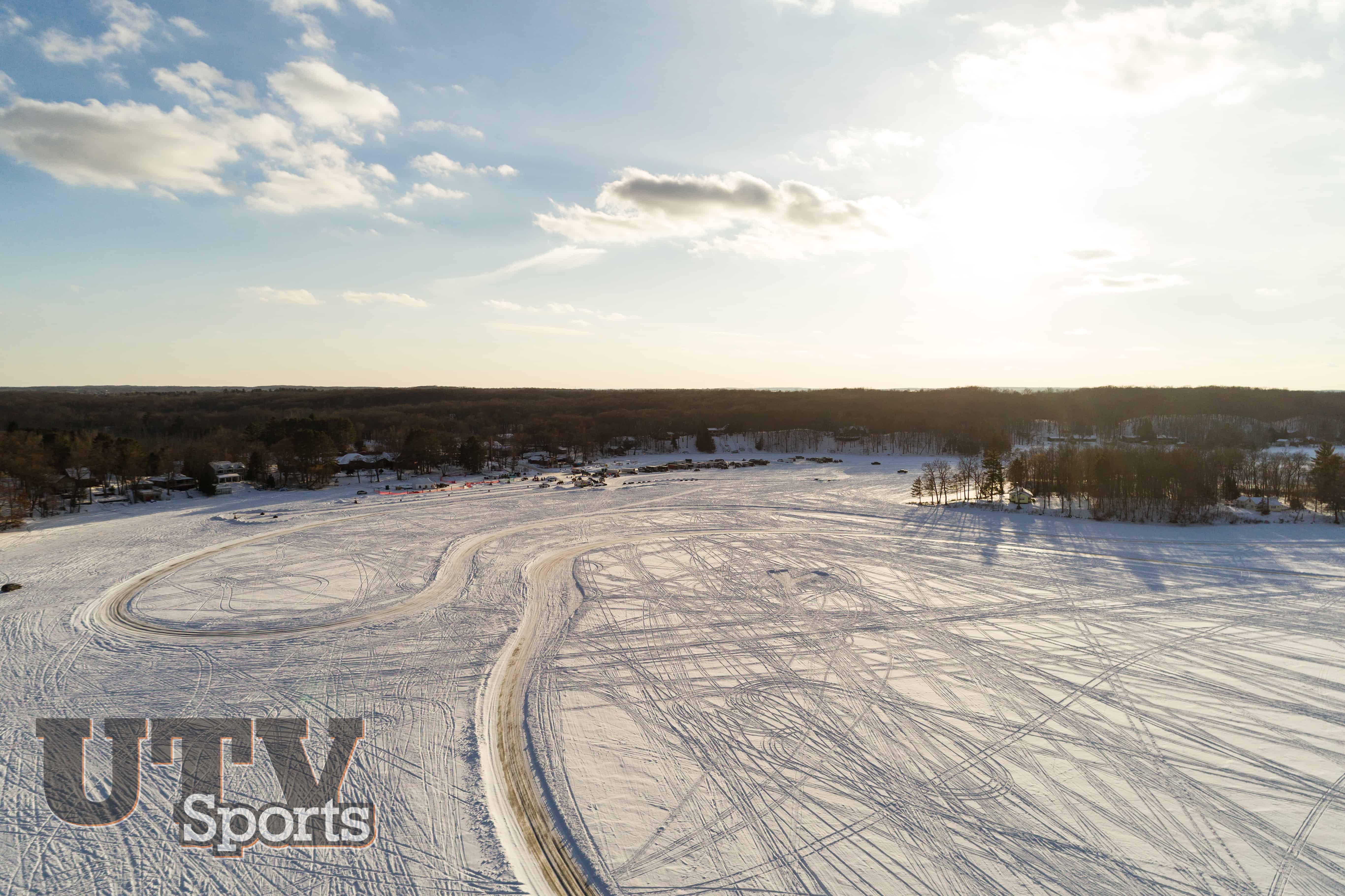 So, here we are, this was the second year for the Iceman race, and it’s definitely gaining momentum. Last year the race was 250 miles; this year the race was doubled to 500 miles over two days. Entries for the race also doubled, with racers showing up all from all over the country to see if they can endure the cold. Evolution Powersports jumped on board this year as the title sponsor, joining others in supporting this upstart racing organization. 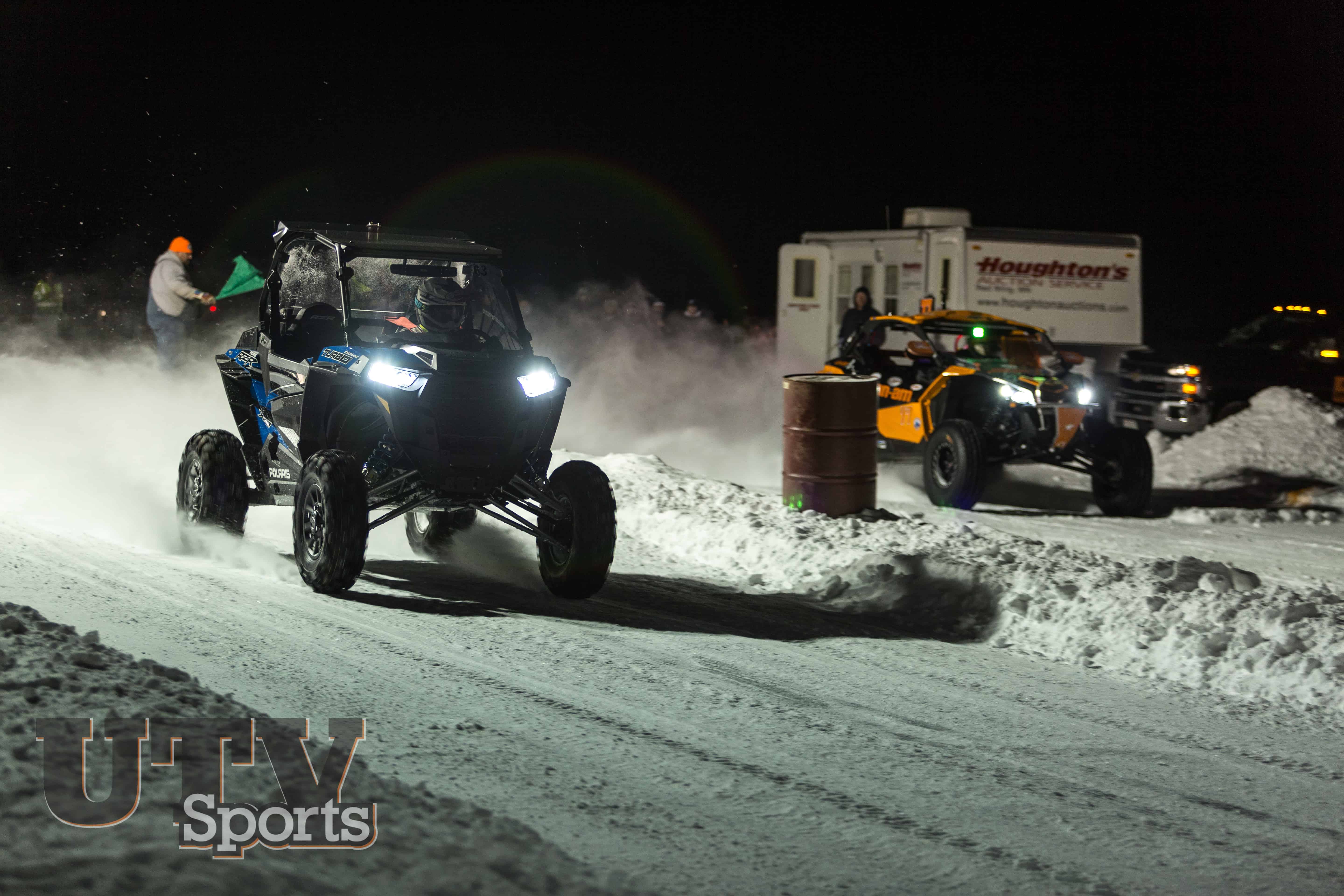 I showed up to the lake on Friday for a little night-time drag racing out on the ice; UTVs, snowmobiles, and possibly even a rental car or two taking part. That was short lived though, as everybody was quick to get back into the heat and get ready for the next two days of racing. Saturday morning came and it was a balmy -7 degrees. Thankfully the race didn’t start till noon, giving the racers time to get themselves and their cars warmed up while final prep was done on the race course. 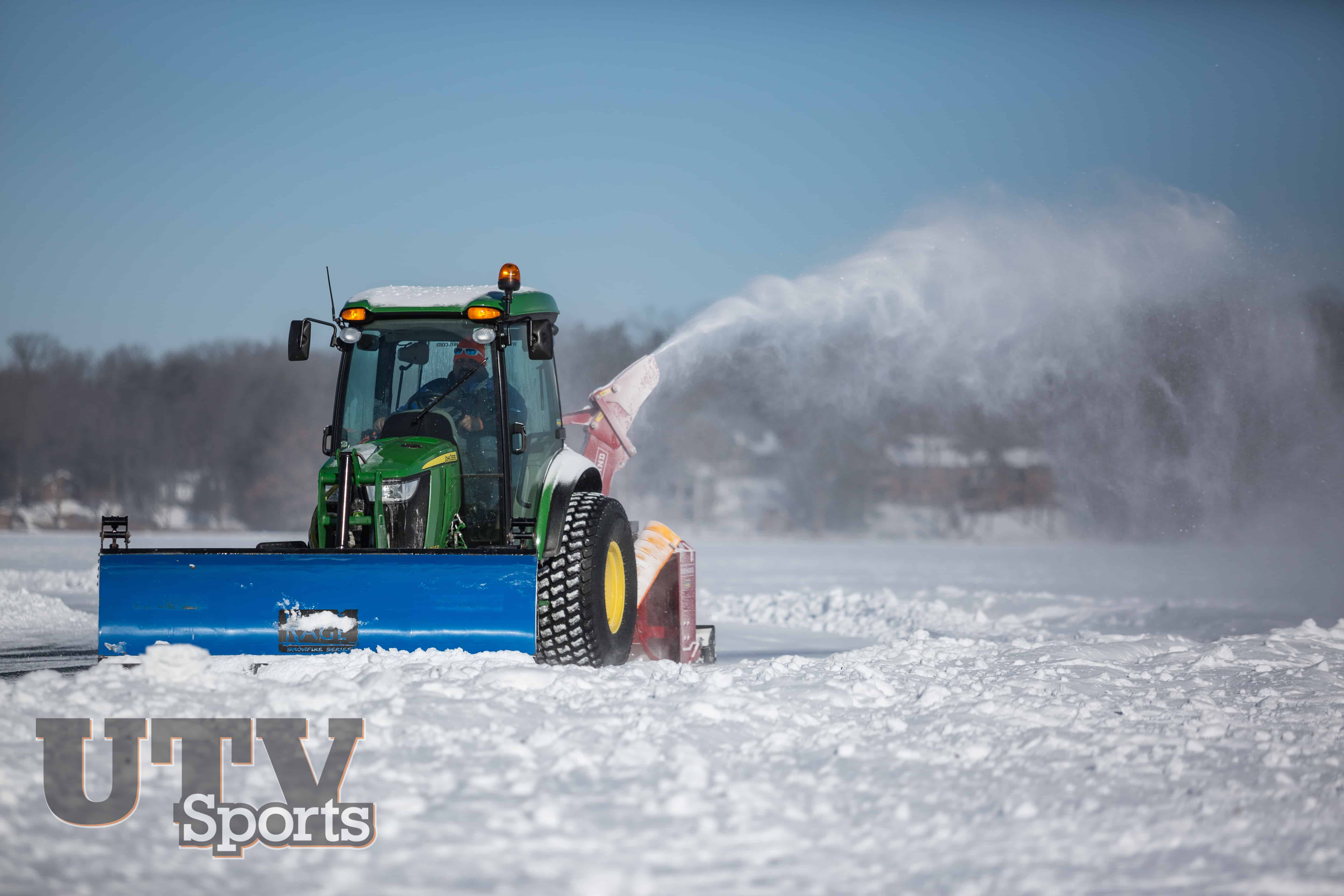 As the race started on Saturday, the 8.5 mile course proved to be tough on the cars and the drivers. The ice was very rough due to the freezing and thawing of layers of snow on top, and the race organizers could only do so much with the equipment on hand to smooth it out. A few racers had their UTVs lowered down to the max, hoping to take advantage of the super low center of gravity in the numerous high-speed flat corners throughout the course, only to find themselves literally skipping off the track due to the lack of suspension travel. Rough ice and deep ruts (up to 15 inches deep by the end of the race) also caused havoc for the tires. Some racers chose to install threaded studs that pass all the way through the tire, backed up by a nut and washer on the inside, only to find that if the stud pulls out of the tire, it also tears a large hole on the way out. Traction with the studded tires was plentiful as long as the racers stayed on clean ice or in the ruts, but much like the ‘marbles’ on a road course or loose dirt in motocross and short course racing, any snow on the ice would send the racers skating off into the snowbanks bordering the track. 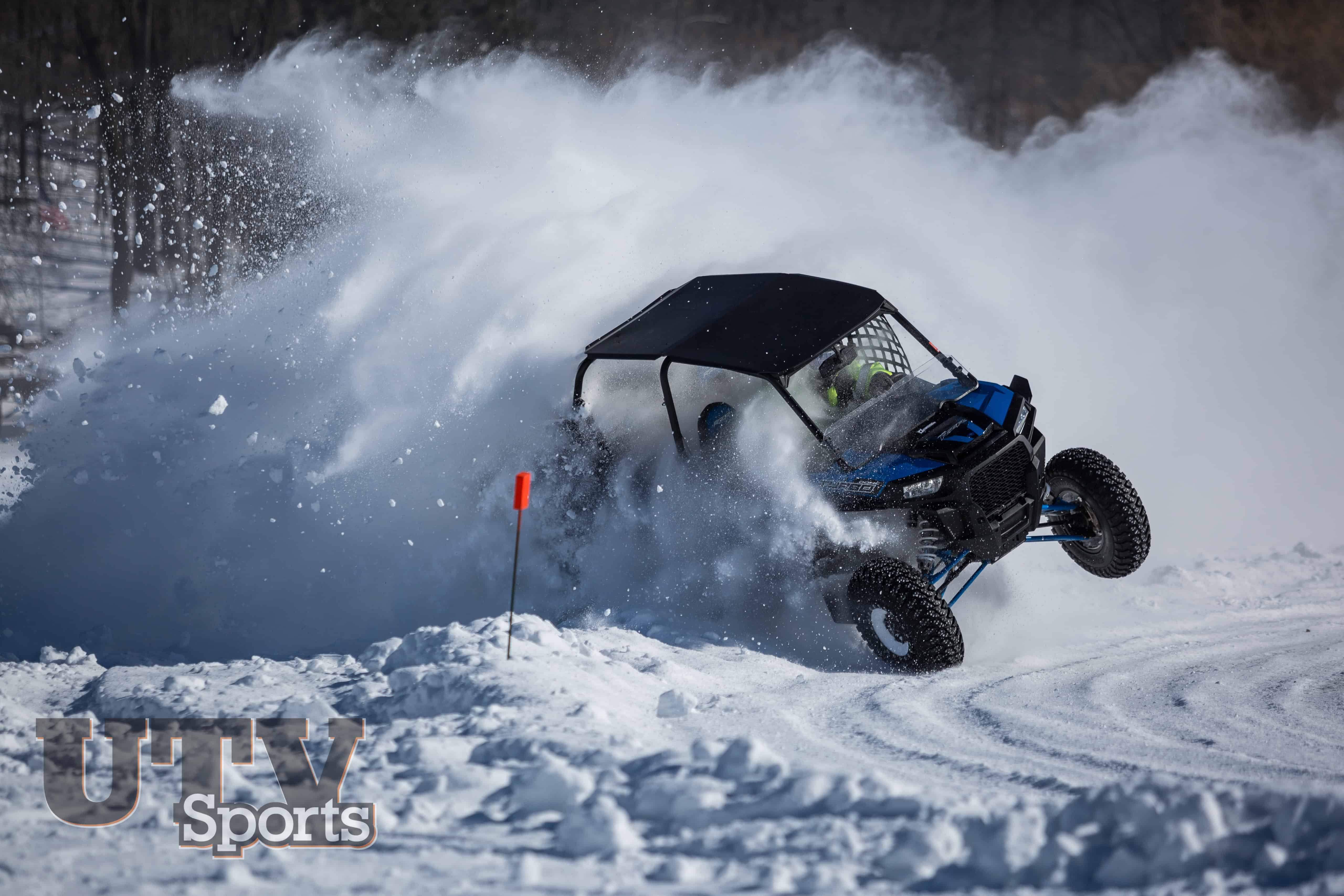 Visibility was also a challenge with clouds of snow being thrown into the air by the cars flying across the ice. Although it doesn’t hang in the air as long as the silt that plagues desert racing, it’d still bring visibility down to almost nothing as the racers battled each other looking for that little bit of clean air to make a pass. 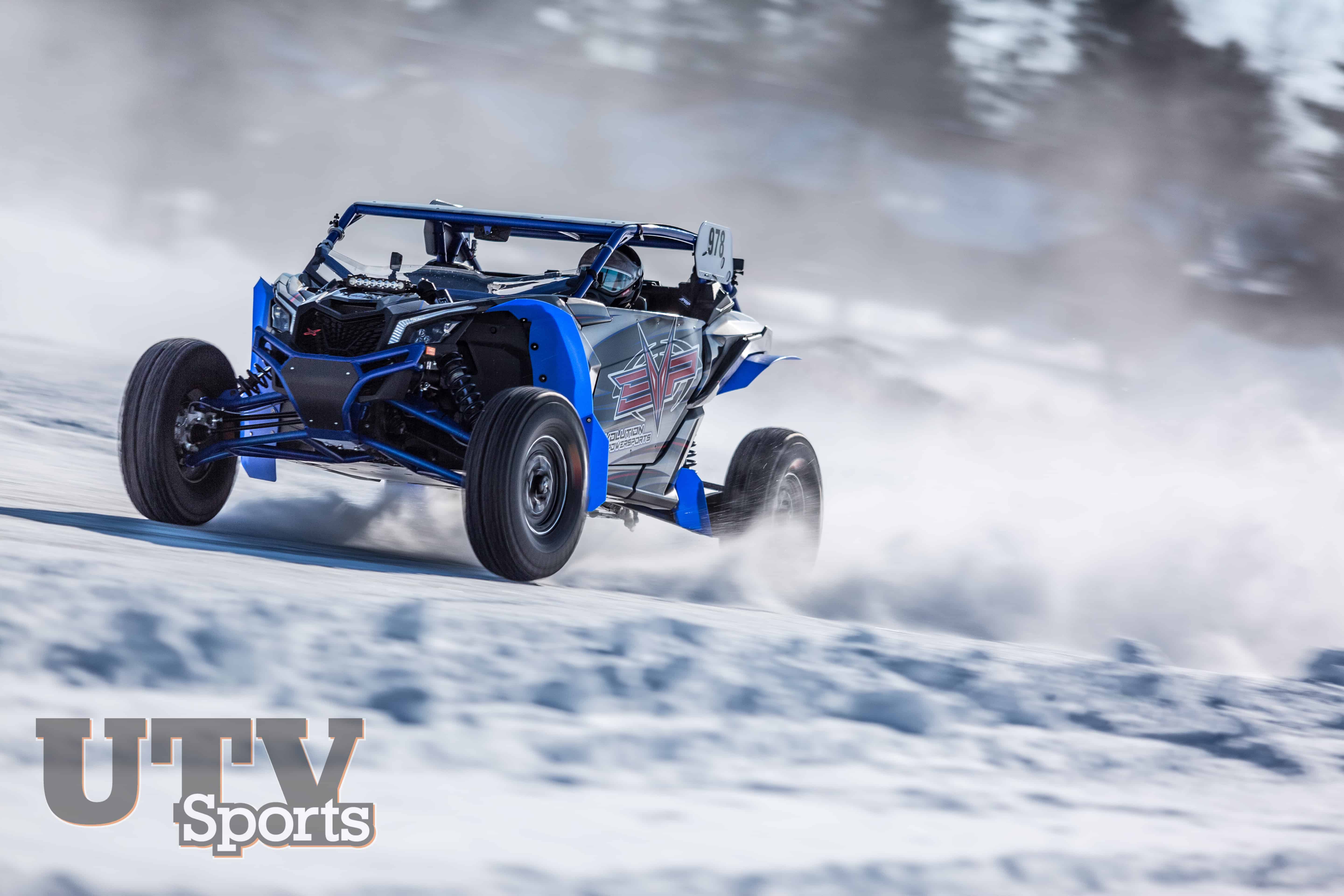 Dustin Jones of S3 Powersports, who’s more than accustomed to desert racing, was up at the front battling for the lead in the beginning. However, he was plagued by mechanical issues keeping him from running the full race distance, but not without setting the fastest lap of the weekend in his rocket-ship Pro Mod Can-Am Maverick X3 brought out by Evo Powersports. “The Iceman 500! What a unique and fun race to do.” said Dustin, “To me, man, after experiencing and seeing the passion that these guys up here have for racing, that get to do this once a year when the lake freezes over, man; it’s something that any racer that has the ability, needs to come out here and do it, it’s quite the experience. It’s so much different from any other type of racing that we’ve done, from short course racing, to woods racing, to even desert racing. It’s just a completely different type of racing, but the guys out here absolutely love it. Now that I’ve done it, I’d call it a bucket list item for anybody that enjoys racing.” He continues by saying that, “It’s really deceiving out here because you can run such a hot pace and the course is super fast, but you have to remember it’s a 500 mile race. It’s a battle of attrition just like in desert racing, so you come out here guns blazin’ running the fastest pace you can, you’re gonna tear the car up. Dealing with the temperatures is another part of it, just like Vegas to Reno when we’re getting 105-115 degree temperatures, it’s tough on your body. This is just the same except you start losing feeling in your feet and your hands, and it makes it so much more difficult to drive, man. You have to deal with your mask fogging up, and controlling your breathing to prevent that, because it will fog up. It’s a whole-nother dynamic to come out here and race, man. It’s equally as difficult as desert racing but just as fun. After doing it once, there’s no doubt we’ll be back out here next year with a better game plan, and warmer clothes.”

It definitely was a battle of attrition, with only 13 of the 27 drivers completing the full race distance. Returning Iceman challengers and veteran TORC series racers Ryan Mulder and Brad Minerick came out swinging in their Yamaha YXZ1000R and absolutely put on a clinic for all the other racers over the two days with a time of 6 hours and 57 minutes. After finishing second in the Pro Mod class last year, they built a new car for this year’s race, and Brad built a 7 mile practice track for them to test and tune the car. “Yeah it was definitely huge, all the practice we did,” Brad says. “We were able to figure out how far we could actually go on a tank of fuel, get the set-up right, and test different studs. Actually, we spent a lot of time studding tires. I’m sick of studding tires,” he laughs. 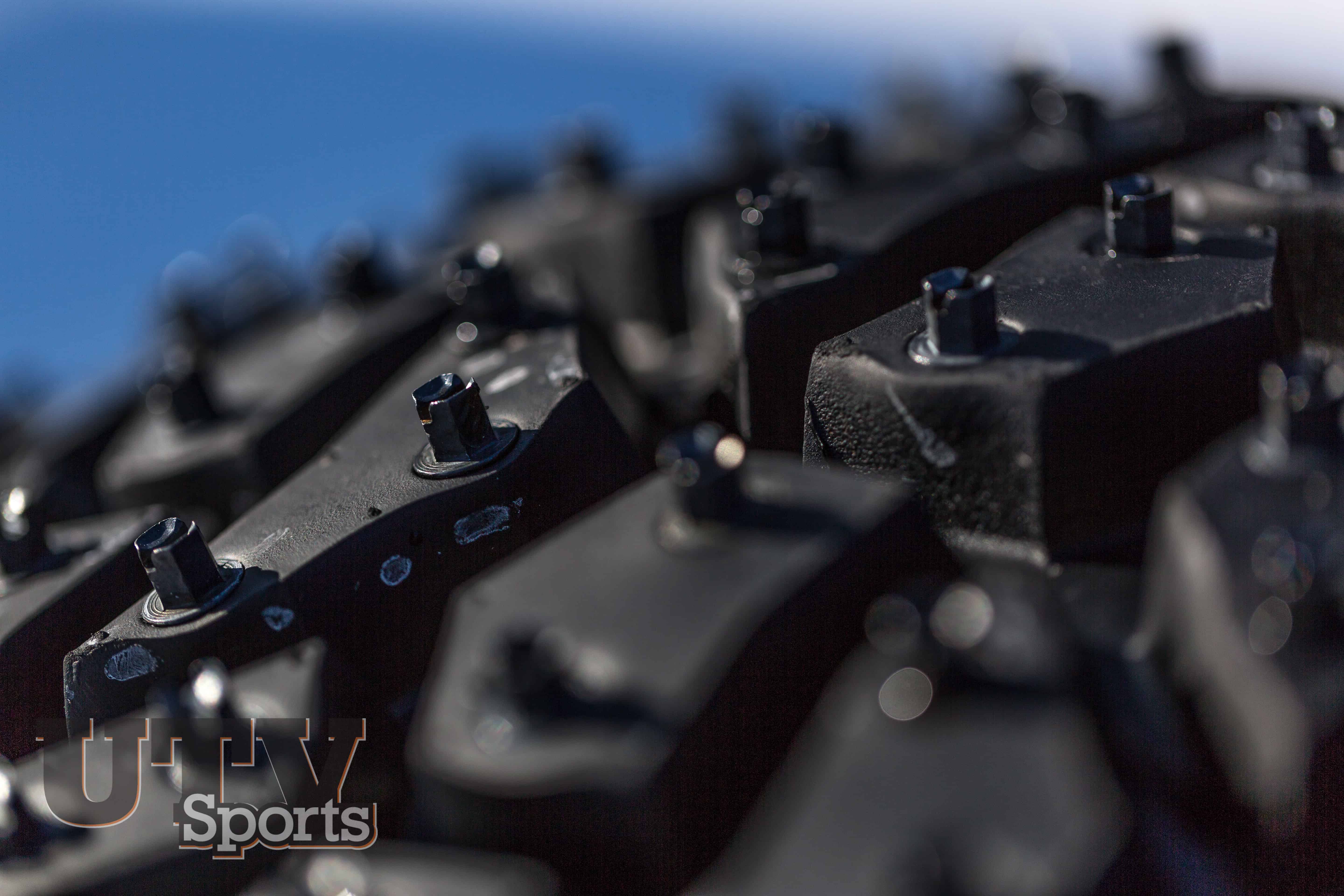 As I stated earlier, the tire studs were a huge factor with car set up. Ryan elaborates, “We ended up going with the shallower-depth screw in stud with no nuts on the backside as we didn’t want a flat tire. This setup basically paid off. We didn’t have a single flaw out there the whole race, we both drove great and Brad ended up with the fastest lap out of the two of us (second fastest of the race), and we won by about 40 minutes. So we really had it together this year.” While Ryan and Brad did finish 40 minutes ahead of the second place Pro Mod driver, Michael Gilliland, the 1st Place Pro Stock driver Ben Enloe finished hot on their heels with a time of 6:59:34, and the third fastest lap of the weekend. John Hallet and Bob Calhoun took home the win in Modified Sportsman with a time of 8:27:57, and Paul Schlueter dominated the Stock Sportsman class with a time of 7:34:10. 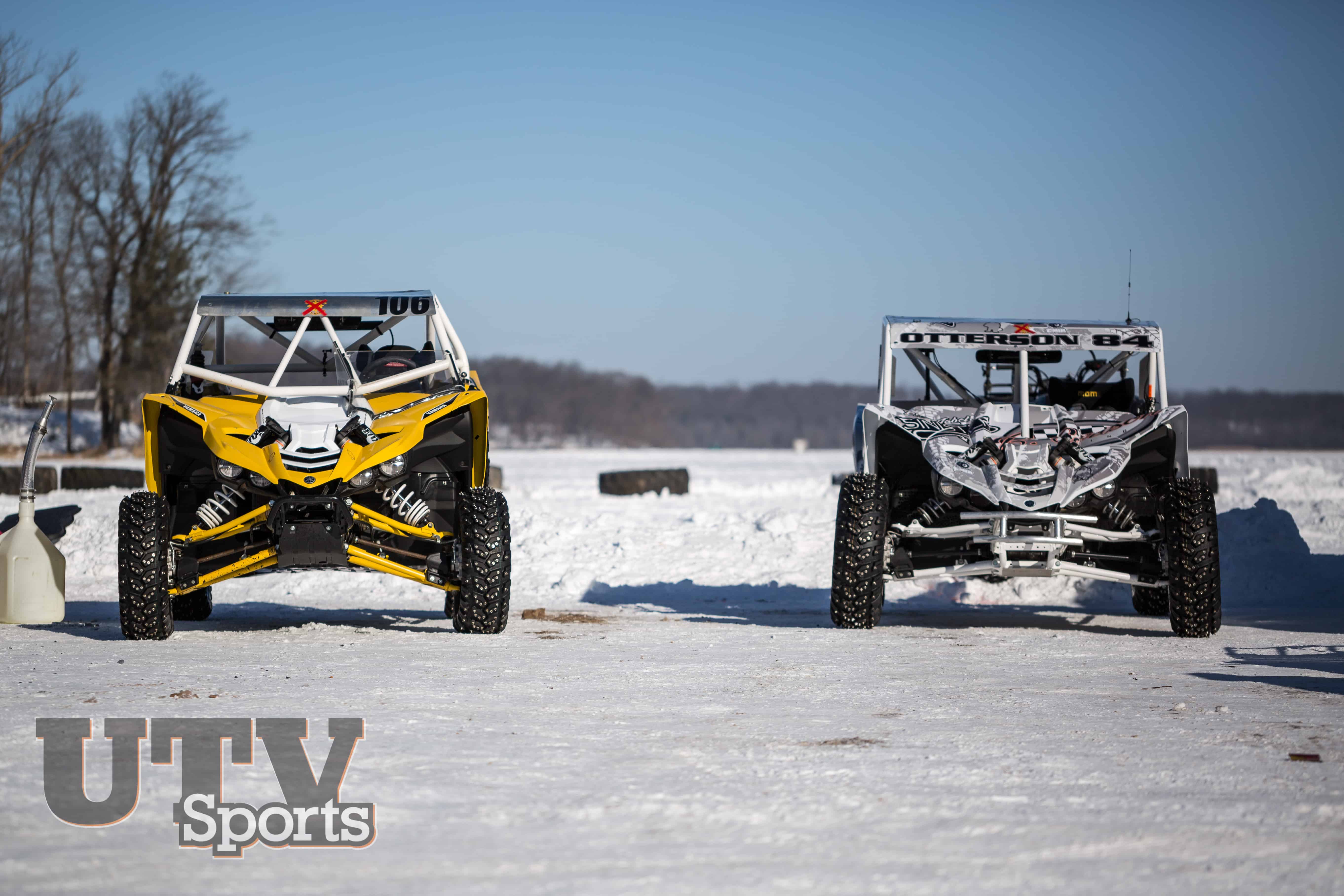 The Yamaha YXZ1000R has been the dominant UTV at Iceman over the past two years. The short wheelbase, low center of gravity, and lack of belt issues all factor in to that vehicle taking the top spot in every class both years, except for Modified Sportsman this year. The below freezing temperatures were a battle for everyone, especially Sunday morning with the racers being forced to leave their cars in Impound overnight (they were only given 1 hour to work on their cars between days), so they had to thaw out the cars with big diesel or propane heaters, scraping off ice and snow just to get things moving. 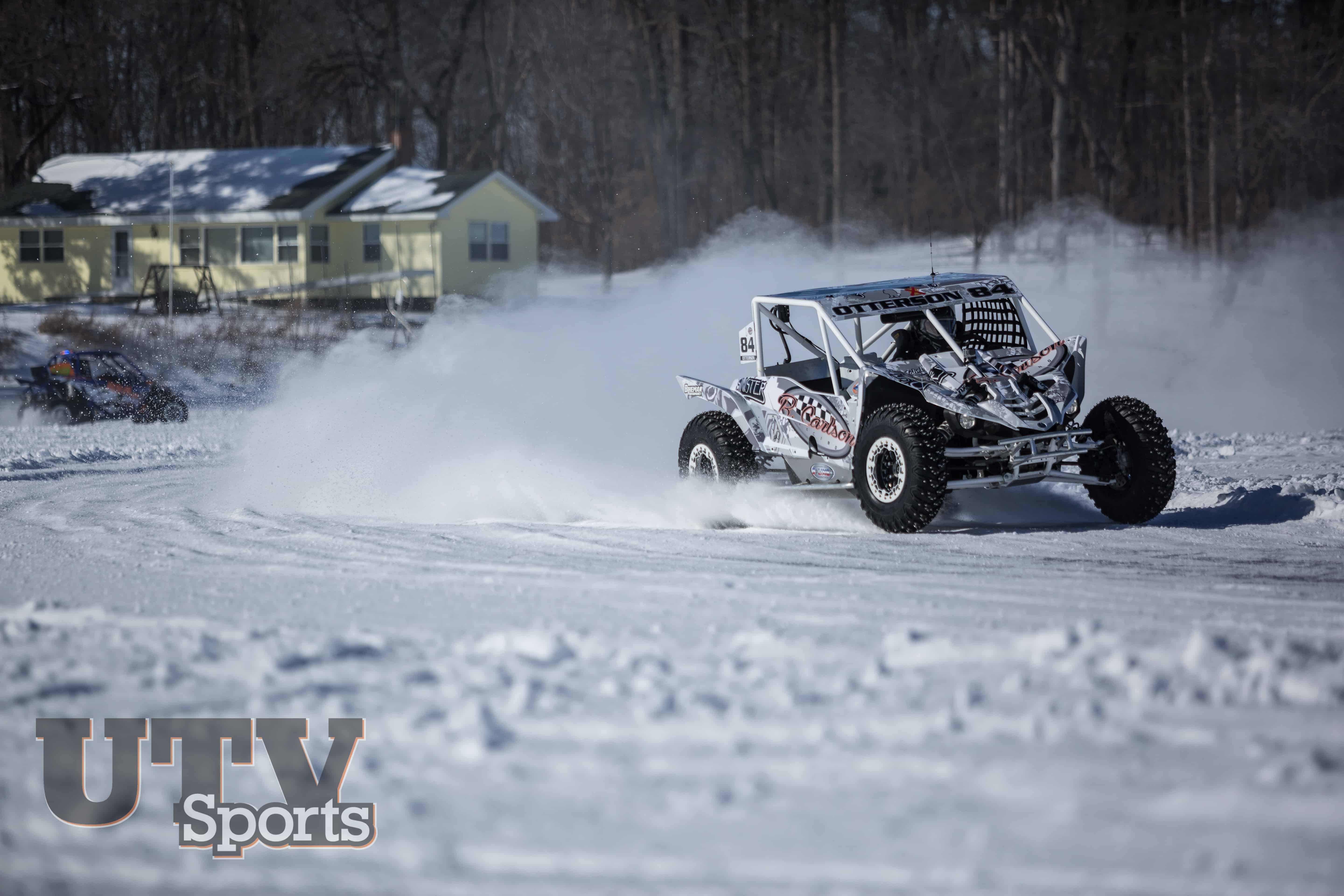 After a strong showing in the beginning of the race, Mitchell Otterson fell victim to the cold on Saturday with the race being stopped for about 25 minutes due to timing issues. His engine breather filter iced over causing the line to pop off the crankcase, then allowing the engine to pump out all of its life-giving oil. He spent the rest of the weekend helping out fellow racers; assisting with pit-stops and working on cars, all while still having a blast. As competitive as the racers were, the camaraderie and fun had by all was something I’ll never forget. It was nearly all smiles and laughter walking through the pits, everyone sharing in the battle to stay warm and keep their cars together in the challenging conditions. With its unique challenges and heavy competition, the Iceman 500 should definitely be a bucket-list item for racers from all walks of life!

For more information or to put this on your calendar for next year, check out http://rtceventsllc.com. We’ll see you there next year!