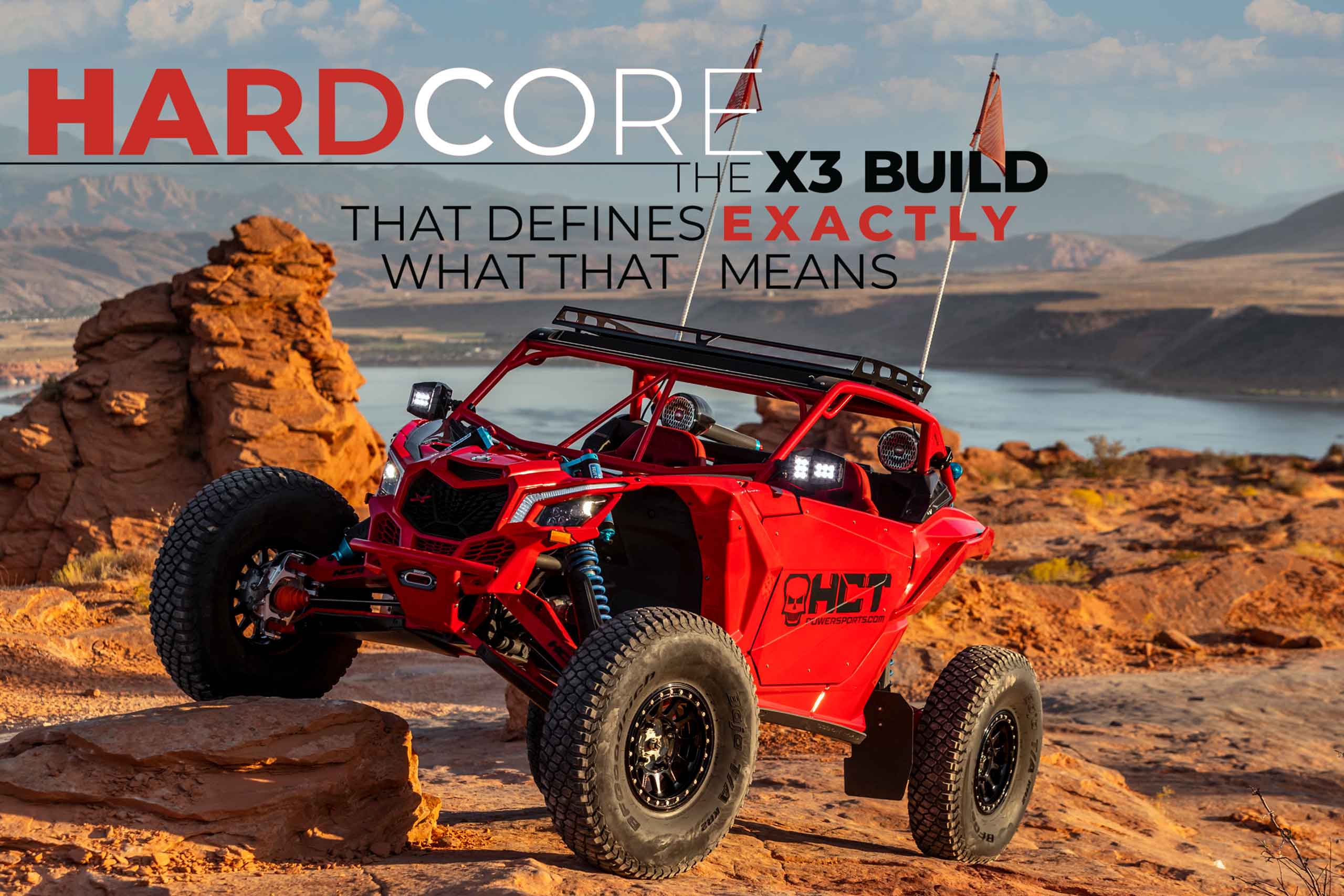 When Attention To Detail Is Taken To The Extreme

It’s not very often a UTV build makes you stop in your tracks and stare; but this Can-Am Maverick X3 might be one of the ones to do just that. For me it’s easy to say why — that crazy beautiful Ford Race Red finish, applied liberally in paint, powder coat and leather. Ironically full body paint was not part of the plan in the beginning, but issues sourcing the wanted Maverick X3 model forced the HCT Powersports crew to come up with a solution, and they certainly did.

The purpose of this joint-effort build by HCT Powersports and HCR Racing was to show off the full capabilities of HCT as a one-stop shop for high-end aftermarket UTV parts. This X3 was designed to turn heads as a show car, but it was also built to perform at the highest level as a race prerunner or ultimate play car.

Starting as a 2020 Can-Am Maverick X3 X DS Turbo RR, the factory 64-inch wide suspension was replaced with HCR’s 72-inch wide Dual Sport OEM Replacement Suspension Kit and King Shock Package with King sway bar end links. The performance of the suspension kit is backed up with added reliability from HCR’s own Shock Tower Support and Bulkhead Gusset Kit, while ZRP 7075 Double Shear Knuckles and 4140 Chromoly X3 Hubs with the larger RZR bolt pattern at all four corners keep the Method wheels and BFGoodrich tires firmly attached to the car. The A-arms also feature HCR’s ⅞ Uniball upgrade up front to work with the ZRP knuckles and HCR’s Billet High Clearance Radius Rods reside out back with ZRP’s Billet Radius Rod Plate and Dog Bones underneath. All of this stuff sure looks nice, but don’t expect beauty to be a weakness — these are race proven parts.

The steering has also been beefed up with ZRP’s Desert Series Tie Rods, and HCR’s UHMW a-arm skids combine with Rockblok’s rear mudflaps to hopefully protect the beautifully finished suspension. Obviously the suspension was not the only system of components to receive the Race Red powder coat treatment — TMW’s Stealth Cage, Front Winch Bumper and Doors were also sprayed down and baked by the guys at Salt City Powder Coating. The OEM Can-Am body panels received the full prep and paint treatment from Troy’s Custom Body & Paint, and it really does change the way this car looks and feels from your “everyday” bolt-on Maverick X3 build.

The gorgeous Fourwerx Carbon Fiber interior and exterior panels definitely add another layer of detail themselves, and helps add to the visual wow factor.

The interior features custom ordered Triple X Venom seats in that stunning red leather with PRP 4.2 harnesses, and a Rockford Fosgate Stage 5 Audio system to blast tunes whether at shows or running down the trail. Agency Power’s billet dress up kit adds even more bling to the X3’s carbon and red leather interior, along with ZRP’s Billet Pedal Kit and Assault Industries Ballistic Steering wheel. Adding to the comfort and bling factor was some convenience via XTC Power Products’s self canceling street legal kit and a Switch-Pros Switch Panel to control the Sector Seven Lighted Mirrors, power the stereo, and the Buggy Whip lighted whips.

This Maverick X3 was definitely built as a show car and still operates as one (you can drool over it at SEMA and Trail Hero in 2021), but the guys at HCR Racing and HCT Powersports have already put it through the ringer. HCR brought it to the 2020 Trail Hero SXS Rally and beat it through the trails of Sand Hollow for a week without issue, and it’s been used for commercials and photo shoots since then… sometimes being pushed over the limit. Believe it or not, this X3 was thrown onto its side at a recent video shoot, and is in process of being rebuilt and repainted for its SEMA appearance. It’s cool to see these guys aren’t afraid to beat on their builds, although they probably would have preferred to never see their $75,000 Maverick X3 on its side.

GALLERY LINK | Even More Angles Of This Beauty!