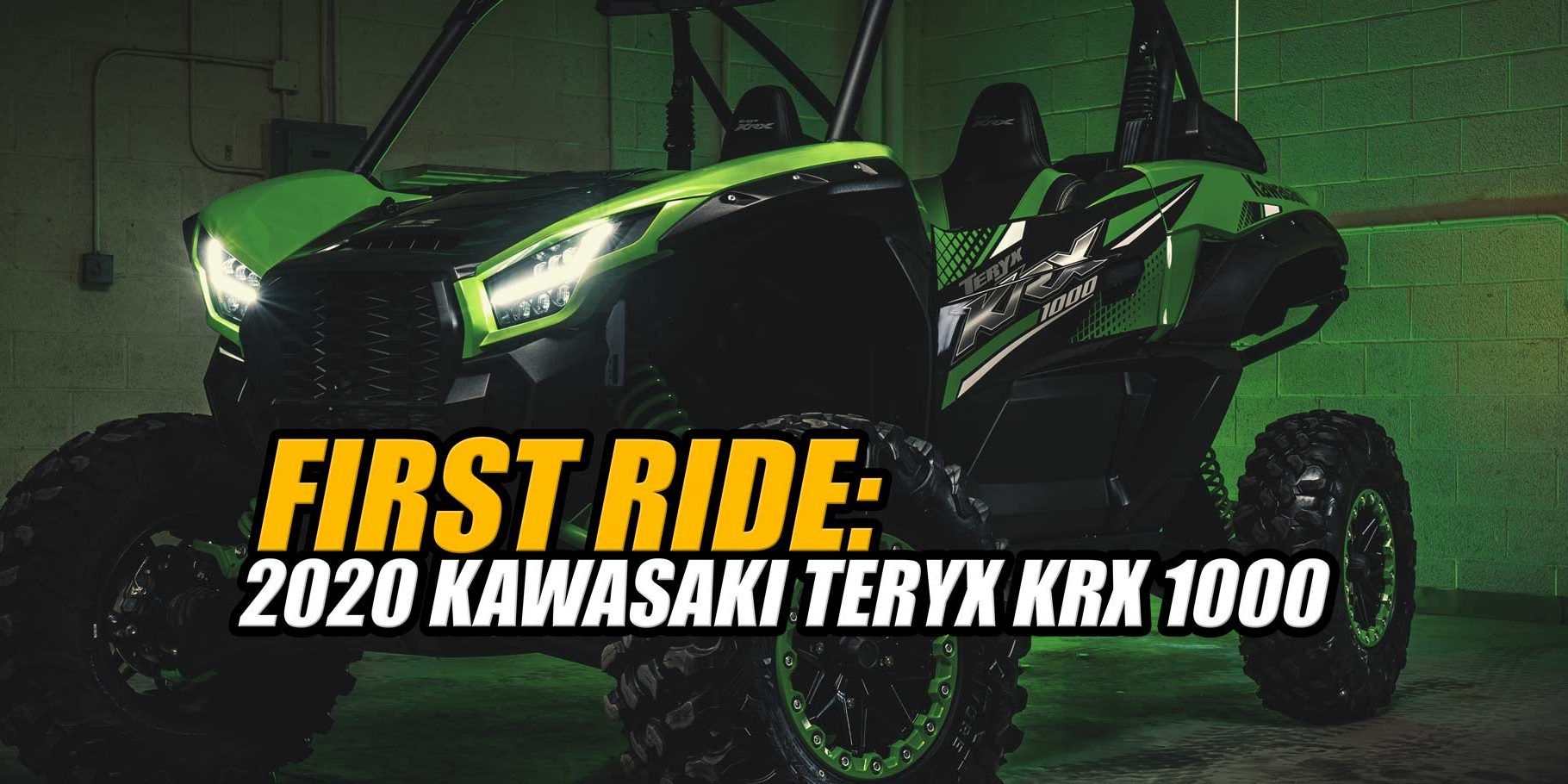 Team Green Hits The Industry With An Adventure-Ready Beast

Growing up offroading and now making a career out of it, I have always had the latest and greatest, biggest and baddest off-road vehicles at my disposal. Turns out, that accessibility has been a blessing and a curse. More often than not I find myself picking these cars apart to find their flaws while overlooking the strengths, forgetting that this new industry has created amazing opportunities for friends and families to get out and explore new areas that they would never have been able to do before. 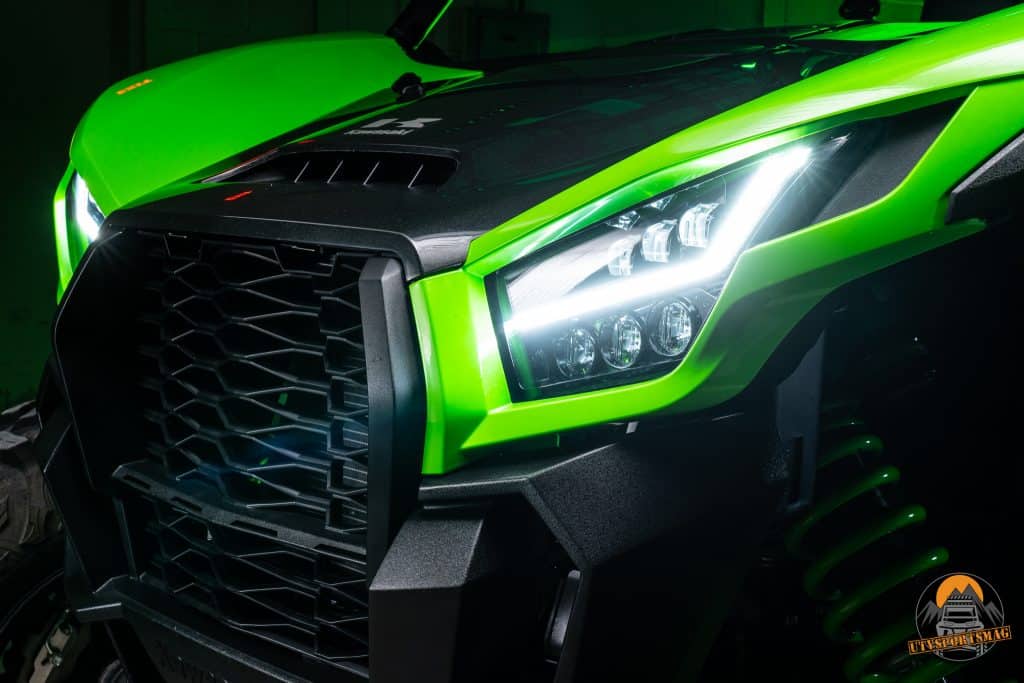 The arrival of our new 2020 Kawasaki Teryx KRX 1000 started the same way that every new arrival to the fleet did, with me picking it apart before having any seat time. It doesn’t have a turbo, it’s heavy, and so on. Then the offer to spend three days on trail with FATCO came in. I needed to pick a car that I was comfortable in for 300+ miles over three days. With my go-to car out of commission, I chose the KRX 1000 for the sheer fact that it had the most cab room for me, my passenger, and 3 days worth of gear. I was also using this trip as a vacation, so I surely didn’t want to work on anything, and the KRX had nine miles on it. What could go wrong with a brand new car? 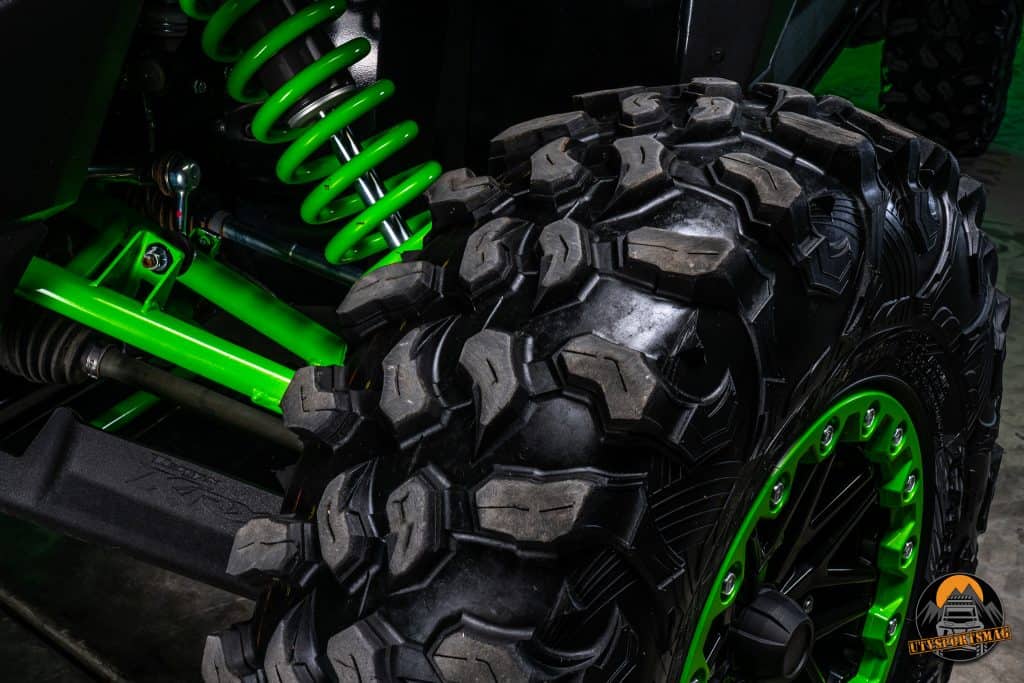 Loading the cars on the trailers, I was really looking forward to a few days out of the office and in the dirt with my friends, but couldn’t help being a little bummed that the car I was most comfortable in was out of commission from a gnarly ride at the Trail Hero SXS Rally. There was no time to sulk—we had some miles to cover.  At 6’4”, I ain’t a small dude. In fact, I take up a lot of room, but the KRX 1000 interior had ample room for me to stretch out and get comfortable, with enough room behind the seats for two five-gallon Giant Loop gas bags, jackets, and tools. A small win, but I’ll take it. 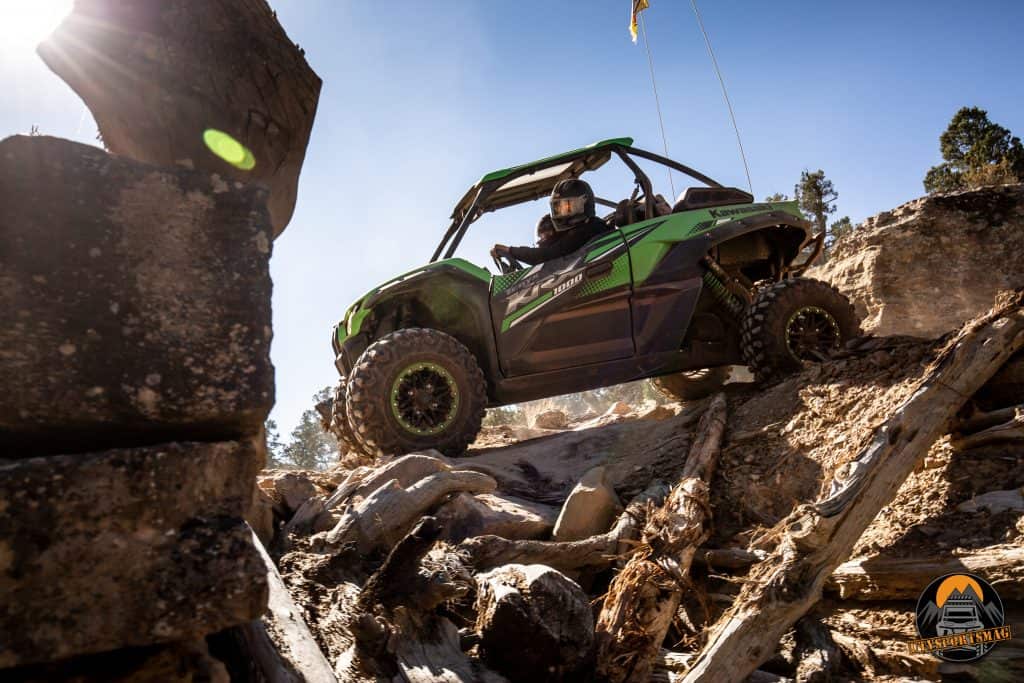 With the bed area able to comfortably fit a 32-inch spare while being able to strap coolers and bags on top of it, this may be the ultimate stock adventure machine, at least a very comfortable and capable one. Only a few miles into the dirt, NJ (my co-pilot) and I were both rocking out and getting into the groove of the trip, right up until the first technical rock climb. A flip of a toggle switch and a pull on the shifter, the Kawi was in 4-low. I wouldn’t be me if I didn’t opt for the line nobody else was taking. As our trail guide Frank waved me off, I leaned into the throttle. To our surprise, the 68-inch wide 99-inch long car Kawi crawled up the vertical wall like it wasn’t there. This, along with NJ’s excitement, set me on a course to find out what this machine was capable of instead of just logging miles behind the wheel. 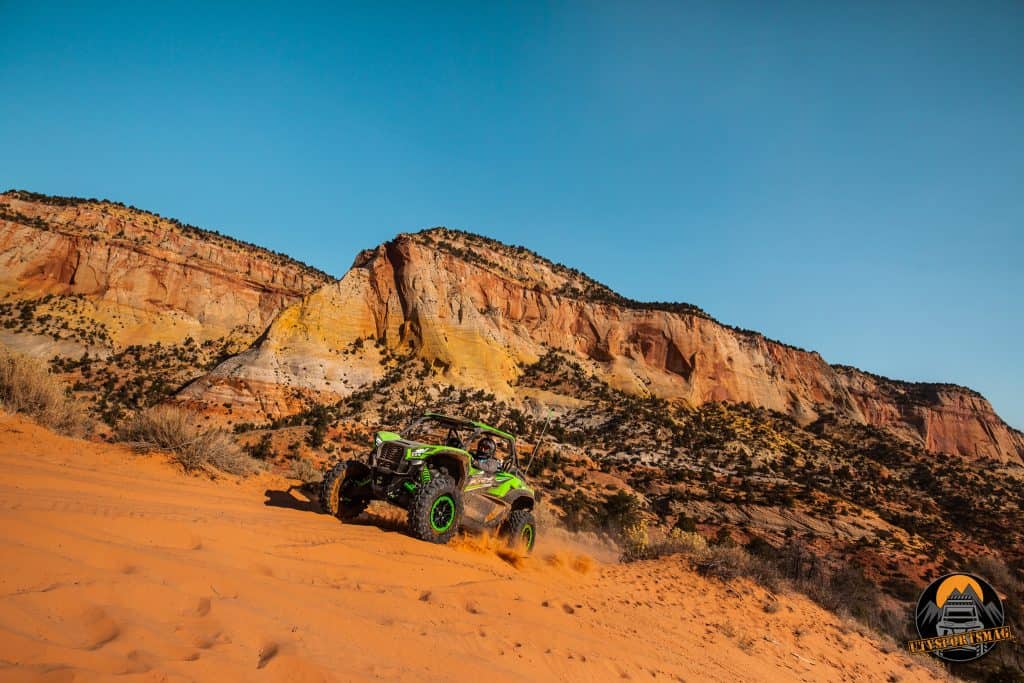 Dropping into some fun, fast-paced sandy washes, the light and responsive steering made it a breeze to whip through the corners. I did notice a bit of understeer, but I can’t blame the geometry of the front end quite yet; it may be an alignment issue or even a tire issue. With a slight adjustment to driving style, I entered the corners sooner than I normally would, and the KRX was on rails. The 1900-pound curb weight that everyone is so scared of made the KRX feel very planted and stable as we carried speed through the deep rutted sandy wash corners. Stopping for a beverage well into our 100 plus mile day, the gas light had been blinking for a while, and I decided to dump five gallons of gas in it instead of holding up the group further down the trail,  but come to find out, the KRX didn’t really need it. Kawasaki played it safe,  giving the driver another 30-40 miles of fun once the gauge starts flashing. 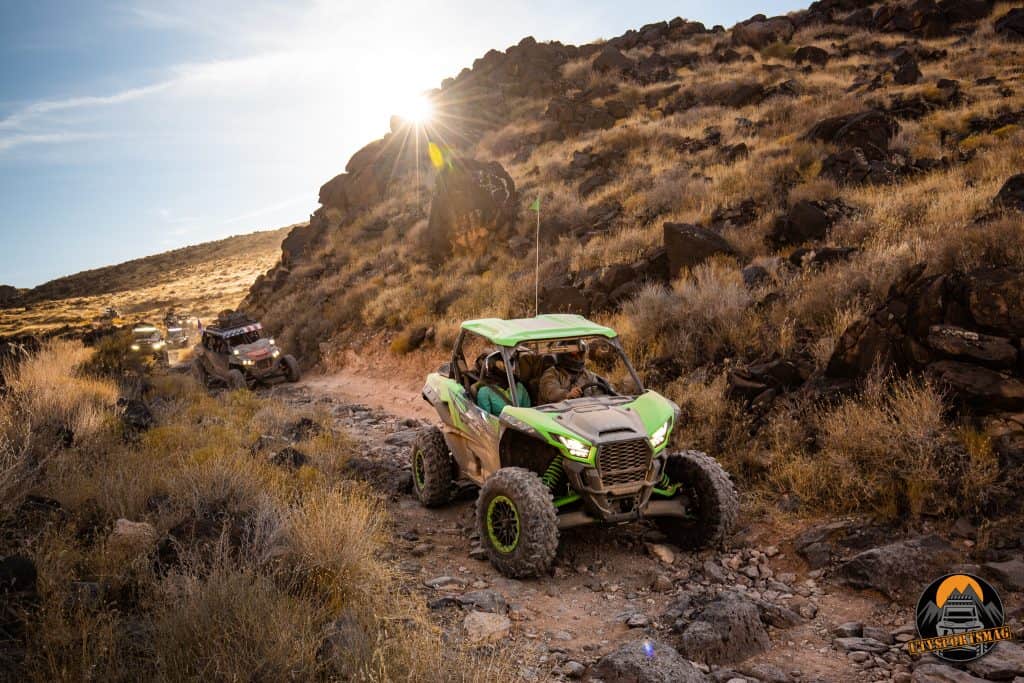 Day two brought some more rough and rocky trails. Hanging right behind Frank, it seemed like we were seemingly locked in a battle to win overall at King of the Hammers. The 2.5 Fox Podium shocks with a true dual rate spring linked to a long rear trailing arm kept everything in the cab riding nice and smooth while we watched Frank’s head move around like a bobblehead. We were making an effort to break something without doing it maliciously, and it never happened. We even failed to suffer a single puncture on the 31-inch Maxxis Carnivores. Approaching a long very sandy hill, I gave her all she had and fell short. The only negative so far was that the 1900lbs and an estimated 112 horsepower made for a bad combination for the deep sand-hill climbs, but unless you are a dedicated dune guy, this does not apply to you as the KRX excels in every other aspect of riding. 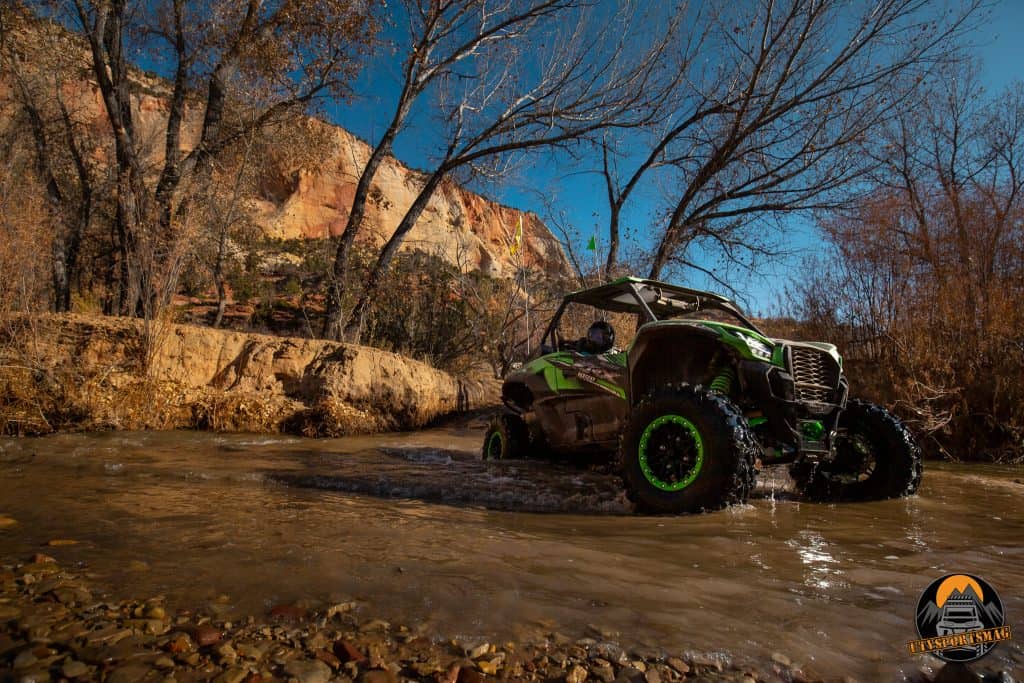 Day three would bring us back to the trailers and the end of our adventure, but not before deep silt beds and long rocky climbs. Hitting the silt at wide-open throttle is always fun, watching it billow off the front tires like baby powder coming out of the bottle. If you’re not the leader, you dive into it blind, which is always a little adrenaline rush. I would venture to guess that the aftermarket already has a tuner that removes the conservative 65mph speed limiter to help the Kawi hang with the turbo cars on the long sections of graded roads. Hitting the rocks, the car was right back at home. Using the low power button, there was no way to whiskey throttle and break the little traction that the tires had. Testing the CVT clutches with the built-in centrifugal clutch, I ran the last long rocky climb in high keeping an eye on the belt temp gauge that comes factory in the cluster. The long technical climb induced little to no heat in the belt while the clutch engagement felt very positive and smooth. The KRX is unstoppable in the rocks. The remaining miles of the ride as well as the trek home were spent thinking about the amazing experience I had in the Kawasaki Teryx KRX 1000. It erased my cynicism and created new excitement in me for the future of this industry. I could fill this article with spec after spec, but there is no spec that will tell you the sheer amount of fun this car brings to the table. In my opinion, this is hands down the best non-turbo UTV on the market and I can’t wait for the rest of the guys in the office to get some miles in it. 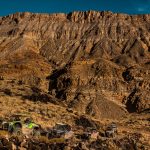 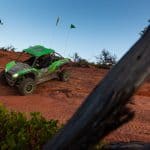 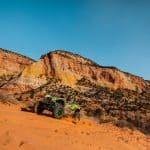 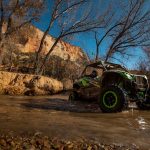 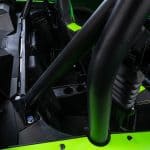