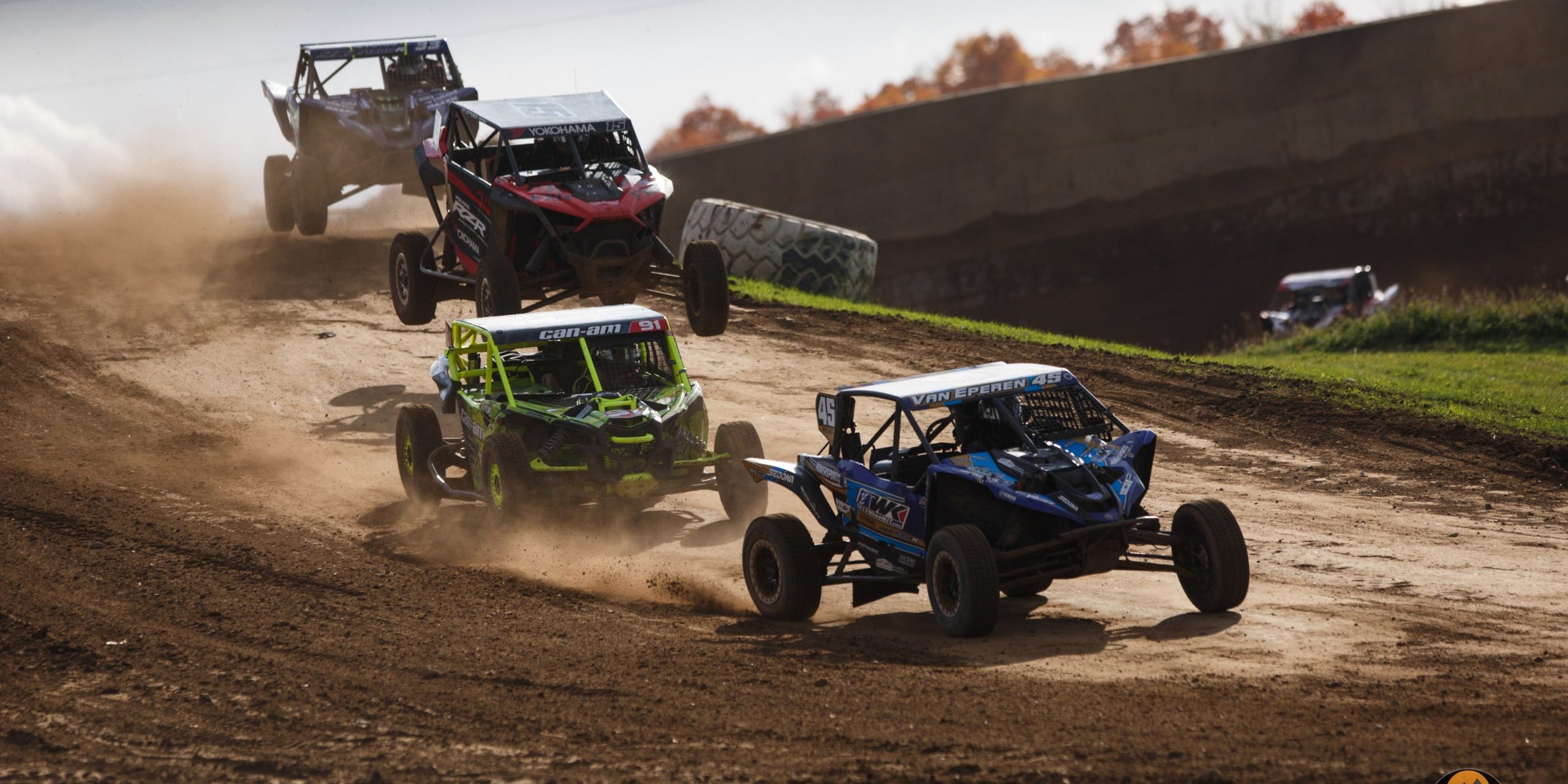 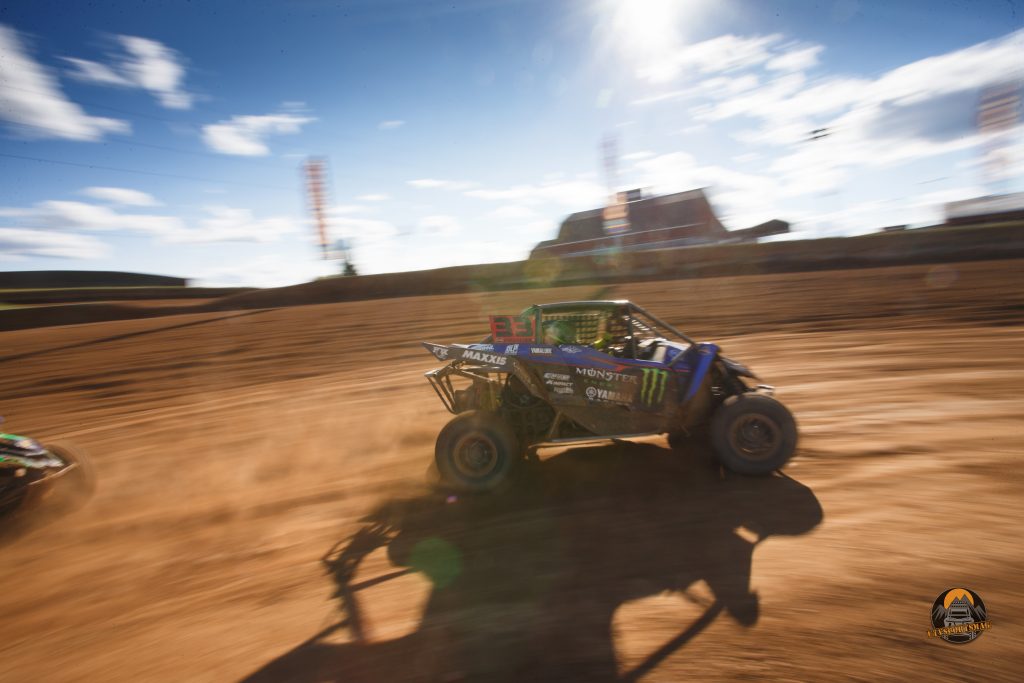 For years Crandon International Raceway has been the mecca of short course off-road racing and each year they continue to show why. With everything going on in the world today, the fact that Crandon was able to pull off a world class event says a lot about the great staff that works there. Marty Fiolka, Tina Kulaf and the entire crew at Crandon worked day and night all summer long so that the events could go on as planned. There was zero marketing done for the event, no radio ads, no TV, just good old-fashioned grassroots and word of mouth. As soon as camping spots became available they sold out.

When you go to a normal short course or desert race you are doing just that. You are going to a race. In Crandon, you are the race. For the weekend, a small town of 1920 people balloons up to over ten times that amount and it’s because of the passion the fans have for Crandon, and have had for 50 years the race has been going on.

As a racer going through turn one with a crowd of 15,000+ fans standing on their feet is something you will never get at any other race. Period. That is why over a hundred UTV drivers showed up to Crandon for Labor Day weekend.

The event always gets kicked off each year with the parade in downtown Crandon Friday morning. The racers get escorted through town from the track and line their cars up along the street where the fans can meet their favorite drivers and begin enjoying the festivities. At high noon, the town’s sirens go off and people get on the sidewalks as the race vehicles parade down the street throwing out candy to kids and waving to the fans. 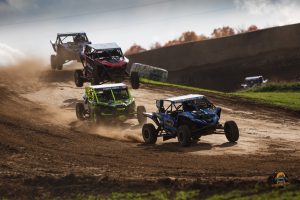 On Labor Day weekend, the Friday and Saturday races were under the COR banner for Round 7 of their points series, but Sunday races were different. Sunday was the Crandon World Championships where no points were on the line, just bragging rights and cold hard cash for the Pro Stock and Pro Mod SXS classes. The winner for each class would take home $4,000 and the coveted World Championship ring.

In the Pro Stock SXS class 35 drivers lined up at the start line all hoping to get the hole shot through turn one. If you aren’t in the top three or four when you round the corner you’re greeted by blinding dirt and rocks. If you don’t start in the front row the best investment is extra tearoffs for your helmet.

Sometimes you get through turn one cleanly, but there are times when things are out of your control and you don’t make it through. Zac Zakowski would end up getting tangled up with a few other drivers and would have to be taken off the track and transported to the local hospital, but on his way out he gave the crowd a thumbs up which led to a cheer in the crowd. 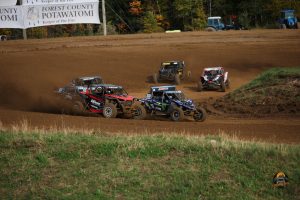 With the red flag, the race would have to be shortened to six laps so racers had to adjust their game plan and after a long delay, get their head back into the race. On the restart, Jack LeTourneau and Jason Luburgh would lead the pack around the short track. Owen VanEperen would make his move quickly and on the third lap moved into first place. The rest of the field would do their best in the shortened race to catch him but it just wasn’t in the cards and VanEperen would be crowned the Pro Stock SXS World Champion in his first ever pro win.

In the Pro Mod SXS class Andrew Carlson would battle his way to a win putting his Polaris RZR on top of the box. The win didn’t come easy though as Luke Stubbs and Ronnie Anderson put on a great performance for the majority of the race in the top two spots, but as the race progressed Carlson would prove to be the faster car. Anderson would eventually fall back and with only a few laps remaining Carlson would make his move on Stubbs to take over the lead to become the Pro Mod SXS World Champion. 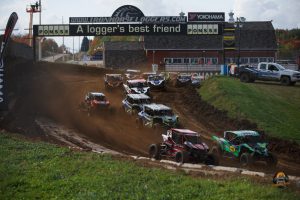 In a year where most racing events are getting canceled Crandon is just what the motorsports world needed. Crandon and short course racing go hand in hand and just a few short weeks later racers came back to Crandon to finish out their year, and crown their season champions.

For the final two races of the season the track was decorated with beautiful fall colors surrounding the raceway as the leaves were in process of changing from green to piercing reds, oranges and yellows.  Originally scheduled for late June the races were moved to the end of September to deal with Covid-19.

In the summer months the track at Crandon invested in new lights around the track and for the first time the Pro classes would race under the lights on Saturday.

The Pro Stock SXS class Saturday night had a long time short course racer but first time SXS racer thrown in the mix. Todd Leduc was asked to fill in for Jack LeTourneau who was unable to race this weekend, and the seasoned vet didn’t miss a beat around the track at Crandon.

Starting on the first row Leduc took the hole shot early in a race that would begin with a light rain.  As each lap clicked off Leduc kept his lead as the rain got heavier and heavier.  What started as a dry, one line race course with mud on either side, quickly became a mud fest as the rain poured down. 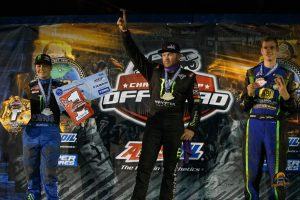 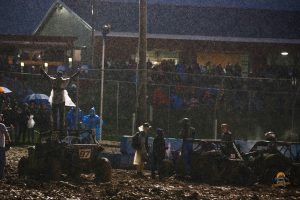 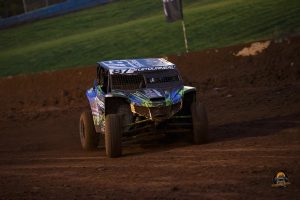 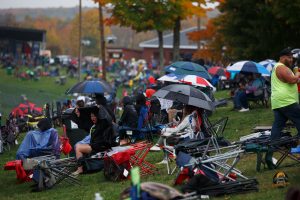 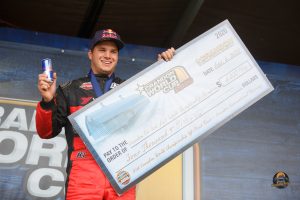 Leduc would cross the finish line first with a clean car but everyone behind him wasn’t so lucky.  CJ Greaves who had a commanding points lead coming into the weekend worked his way from the mid pack to finish in second place and it showed.  Not only was his Yamaha caked in mud but a rock that came into the cab smacked him in the eye. With so much mud, racers were running out of tear offs causing them to lift the shields on their helmets, and Greaves had to do so and took a rock straight to the face. CJ would push through however, finishing in second place and wrapping up the Pro Stock SXS championship with one round to spare.

In Pro Mod SXS the race was much closer as Greaves was looking for his second SXS championship with Rodney VanEperen 10 points behind.  While the rain subsided for the Pro Mod race Saturday night, the conditions were still bad. Greaves would finish the race in first place with VanEperen right behind as the two battled the last few laps with VanEperen knowing he needed to gain points on CJ.  After the race CJ’s lead would grow by four more points setting up Sunday for a great race.

As the Pro Mods took the green flag Sunday for the final round of racing, VanEperen looked like a man on a mission.  Moving into the lead on the second lap Rodney dug deep knowing that he would need to win and Greaves would need to finish far behind in order for him to have a chance at the championship. Kyle Chaney was the only one even close to VanEperen and would finish in second place. Greaves was caught battling with Andrew Carlson a few spots behind for the final podium spot and looked to be playing it safe knowing his position guaranteed him a championship win. 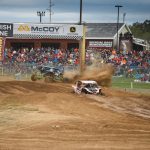 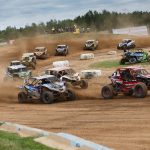 VanEperen did everything he could on Sunday by winning the race, but it was too little too late as Greaves would cross the finish line in fourth and win the Pro Mod SXS championship by six points, and he will go down in history as double champion in the first year of Championship Off-Road short course racing!