Slaying the Hammers: Can-Am Makes A Statement Once Again 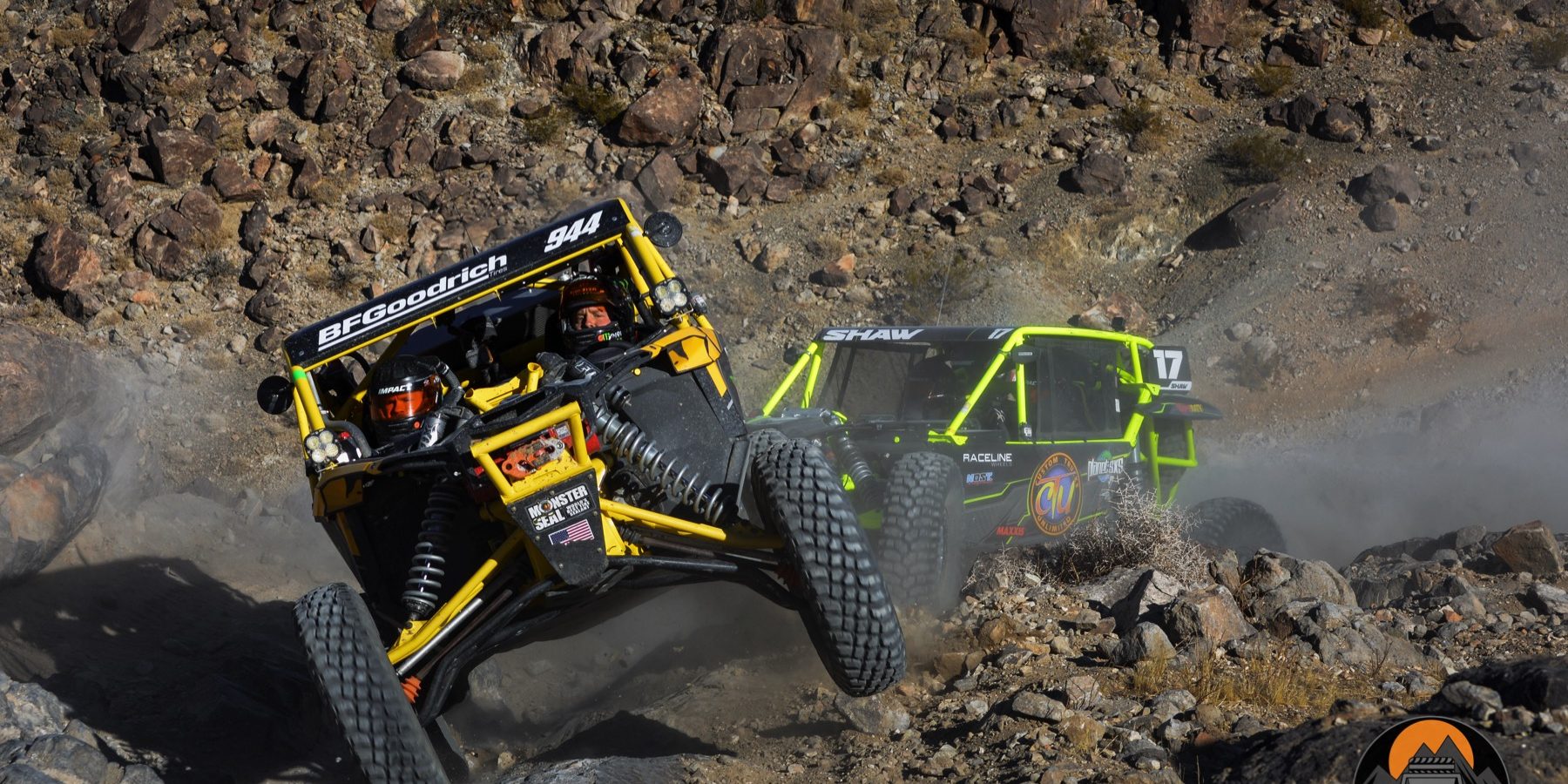 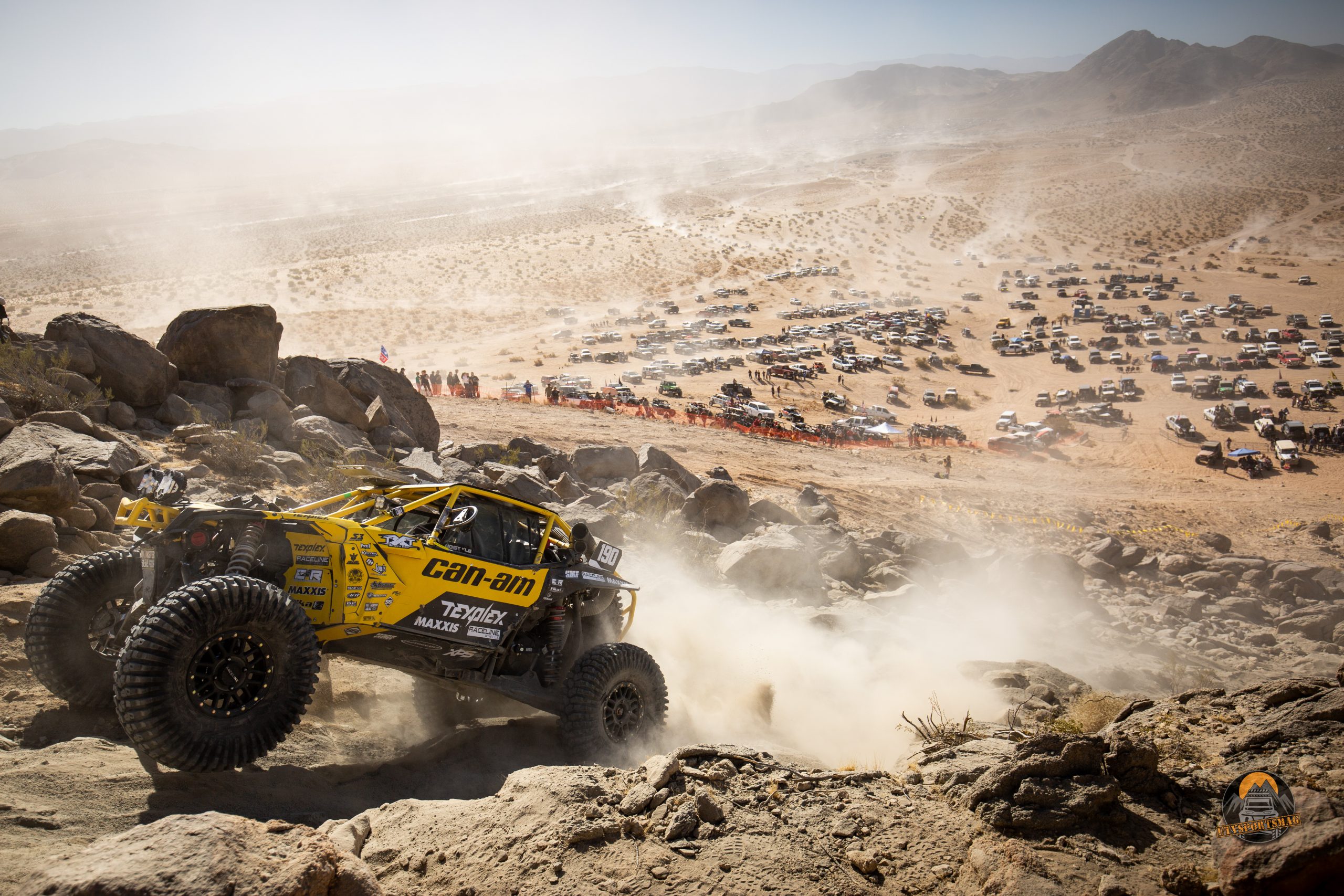 The story of David vs. Goliath tells the tale of a smaller, weaker and underestimated opponent taking on a bigger, stronger adversary. To the unfaithful eye, there is no chance for David to win this battle, but to the believers and those that put in the work, nothing will stop him from defeating the giant, but more about that later. The 2021 King of the Hammers marked the 12th year of UTV racing at this week long event. In those 12 years, we have seen the race course get increasingly more difficult to further challenge today’s more capable vehicles and the number of drivers exploding to take on the beast of a race. 2021 would bring the largest field with 113 racers taking the green flag. This year would also bring the longest and gnarliest course that we have seen. To even finish this race would take a mountain of grit.

What would possess a person to take on this challenge? We aren’t quite sure but a long list of household and talented names showed up to give it all they had. The Miller Brothers, Casey Currie, Jason Scherer, Cameron Steele, Mitch Guthrie, Dustin Jones and so many more arrived on the lakebed with optimism. From the second they arrive in Johnson Valley CA, the odds are stacked against you. I mean that very literally. Doing the math, more cars were left dead on the course or had to limp back to the trailer than crossed the finish line. 46 would be the exact number of finishers out of 113 starters. With a mix of desert and rock trails, the talent pool did not talk about how sweet victory would be, they chatted about wanting to see the checkered flag before night fall. Coming from Baja 1000 winners and past Kings, that should say quite a bit about this race. 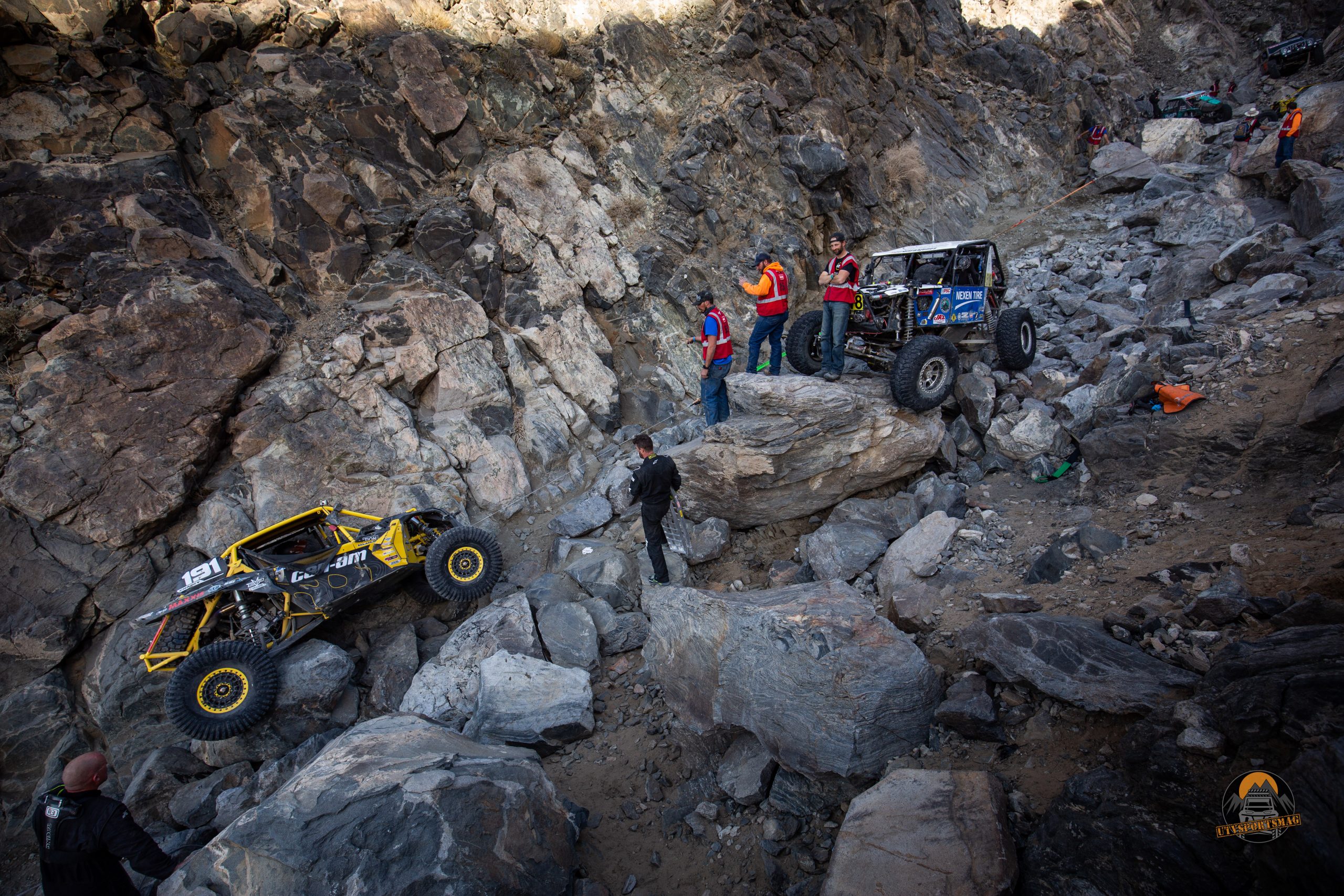 There is nothing quite like the morning of race day. This year’s crystal clear and calm weather warmed the lakebed as the drivers staged and mentally prepared for what was about to happen. The air was thick with excitement and anticipation. Crews taking one last look at the cars then knuckle bumping their driver and navigator before heading off to prepare their pits. Some drivers chatty and social, others, quiet, their helmet on, and an intense look in the eyes. The field paraded to the start line as the cameras scurried to their spots to catch all the action. Jay Shaw had laid down an impressive time in qualifying and would be first off the line. With the desert loop up first, this gives he and Nathan Wolf who qualified second a chance to build a lead early before getting onto the interstate of SUV size rocks. Being chased by Ronnie Anderson, Hunter Miller, Dustin Jones and the rest of the field it would be hard to hold that lead for long. Two by two the cars leaped from the starting line, through the infield and out into the wild. 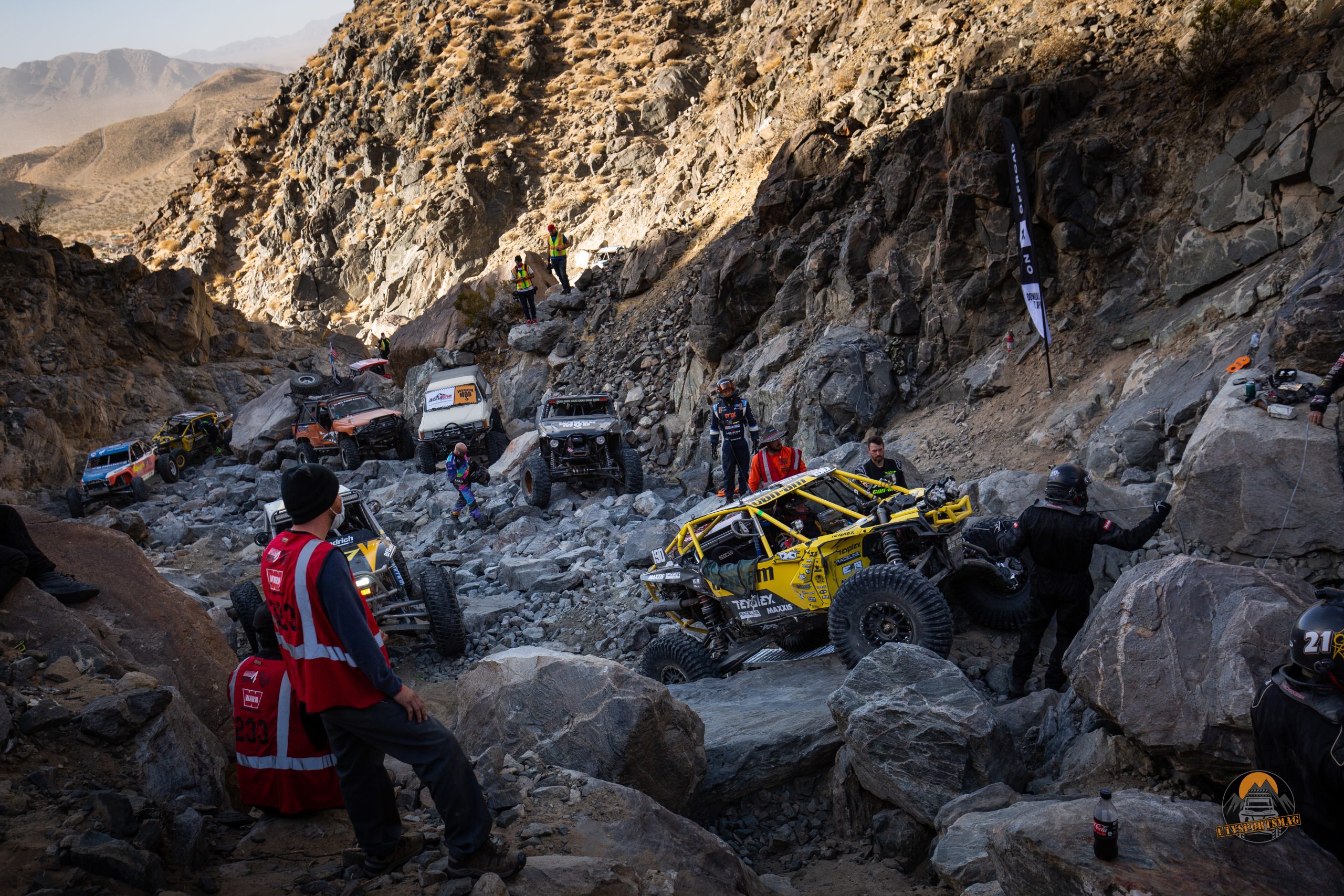 Adding to the difficulty of the race, once a driver leaves the starting line, only themself, their navigator or other competitors can assist on course. The crews can fuel and wrench but only in designated pit areas. If a car runs out of fuel or needs a part they don’t have, someone is running miles to a pit to carry a jug of fuel back to the car. It’s not a matter of if, it’s a matter of when something happens that a person’s grit will be shown. On lap two, Sara Price with Terry Madden as her Navigator ripped a front hub off the car clogging the preferred line up Jack Hammer. Instead of sulking or winching the car out of the way, they set out to rip the front end apart and wait 2 hours for parts to arrive, in that time, they did everything humanly possible to help their competitors. Pulling winch lines, spotting, turning wrenches on other UTVs. At one point two Gomez UTV’s were both broken alongside Sara and Terry, and they were all elbows deep wrenching on the cars until they had enough parts to fix Sara’s RZR, and one of the Gomez RZRs. Price and Madden would go on to finish the race in 33rd spot. A true display of grit and sportsmanship that is seemingly lost in modern society. 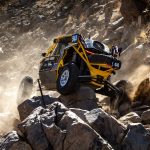 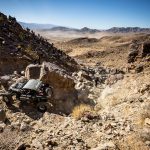 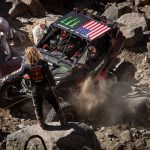 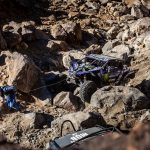 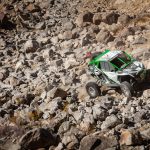 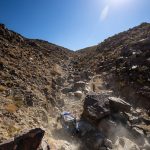 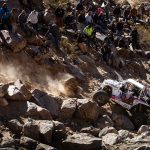 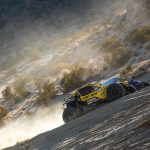 Title sponsor of the UTV race, Can-Am Off-Road, made their presence known from the minute they rolled in. A whole new look, a very clear statement that they were there to continue where they left off last year. Coming from a podium sweep in 2020, they had big shoes to fill. Their well coordinated effort started well before the debut of five factory backed teams all sporting a throwback Can-Am yellow livery, these teams had been building, testing, tuning, and testing again for this single race for months on end. I believe this marks a new era for UTV racing. Taking it from individual teams backed by the factory to a cohesive factory team effort like you would see in F1, DAKAR, NASCAR or Supercross. They brought a level of focus and professionalism to the sport; it showed well and it worked. The new pretty yellow cars dominated with another sweep of the 2021 podium; Kyle Chaney first, Hunter Miller second, and Phil Blurton third. UTV dominance was not enough for Can-Am and their drivers. Kyle Chaney, Hunter and Cody Miller would go on to take on the biggest and baddest of the 4400 class just three days later in the exact same X3s. David clearly set out to deliver the fatal blow to Goliath. Ninety vehicles would start Saturday’s main event. Eighty seven purpose built race cars and three lonely Can-Am’s. The buzz in Hammertown was almost comical, with the three UTVs being written off before the race even started. Cody Miller had something to prove and shot out of the barrel like a bullet, making moves and running up with the top five until a mistake would scatter 3 of the four axles in his car. As Hunter and Kyle passed they tossed axles his way and kept moving. Kyle now being the lead Can-Am made a mistake rolling in an awkward spot, Hunter would pull up on the scene and right his teammate. The favor would be returned later as the duo worked their way through King’s Graveyard. When it was all said and done, the grit and character from these drivers and co-drivers and the companies that backed them paid off. Kyle and Hunter just missed the top ten coming in 12th and 13th while Cody would settle for 22nd due to the time spent essentially rebuilding his car on course. While this doesn’t seem impressive, remember, they weren’t even expected to make it halfway through a race that only 37 vehicles finished. A monumental feat for them and the UTV industry as a whole. The hardest one day race in the world is attempted and failed by many yet they continue to run it again and again. These dedicated diehards spend the entire next year prepping, dedicating ample amounts of time and money only to go out and get beat up. This sounds like insanity, and it is, but until you have strapped that helmet on and pursued crossing the finish line, you will never fully understand the addiction to defeat Goliath on the world’s stage.