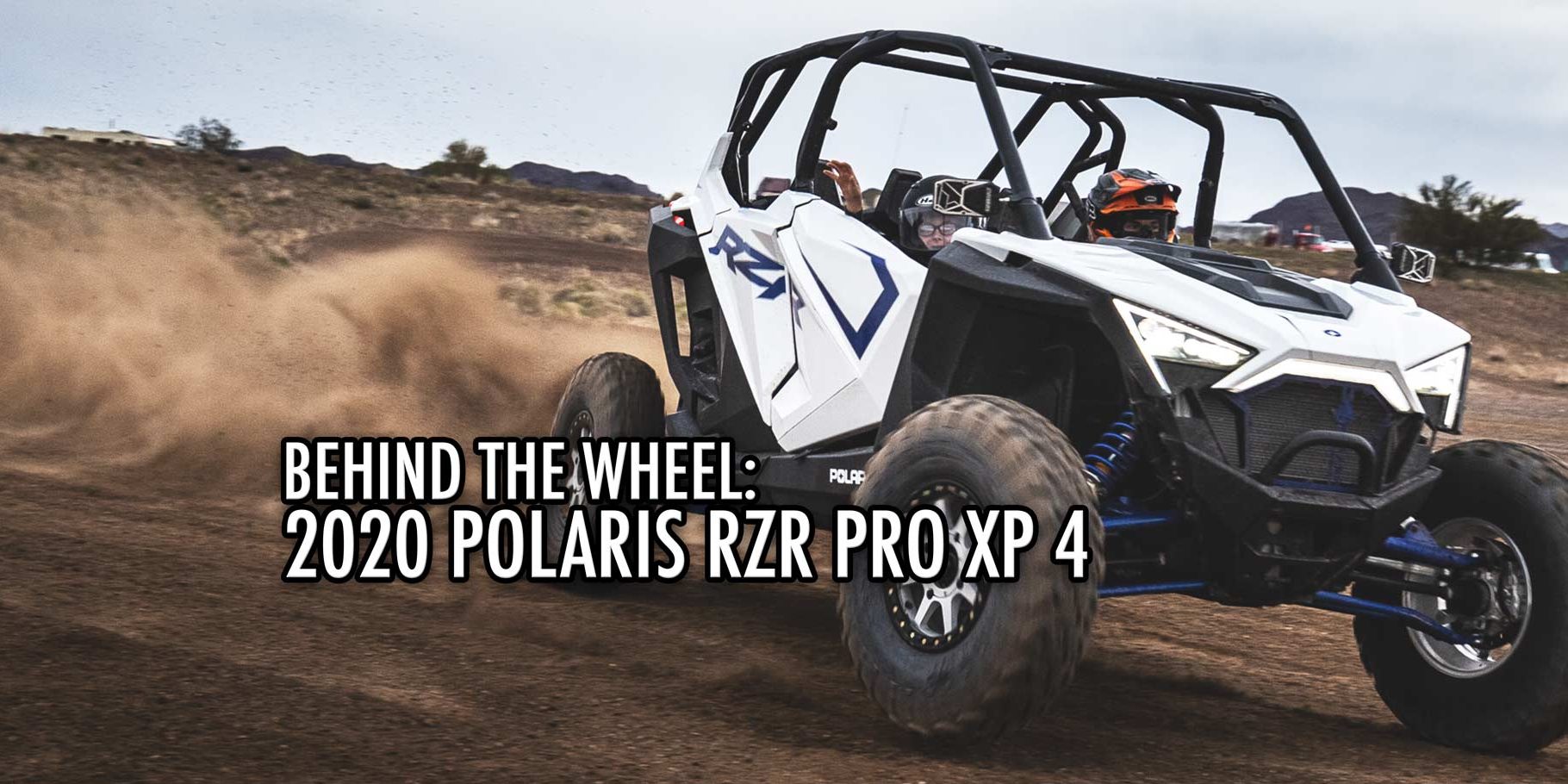 The New Era of RZR

The unadulterated hooligan inside of me does not want to like the 2020 Polaris RZR PRO XP 4. It doesn’t allow me to comfortably attack the massive whoops of my homeland at 70 miles per hour, and while it does deliver the power of 181 turbocharged horses, it does so with calm finesse. But as I’ve grown older, I’ve learned that life is not all about scaring my passengers every chance I get while listening to their screams over the sound of a pissed-off engine slamming into the rev limiter—who am I kidding, that is still me. However after spending over 400 adventurous miles behind the wheel of the RZR PRO XP 4, I’ve grown to love this UTV and all of the things it is capable of…  While also learning that sometimes it is in-fact better to slow down, and just enjoy the ride. 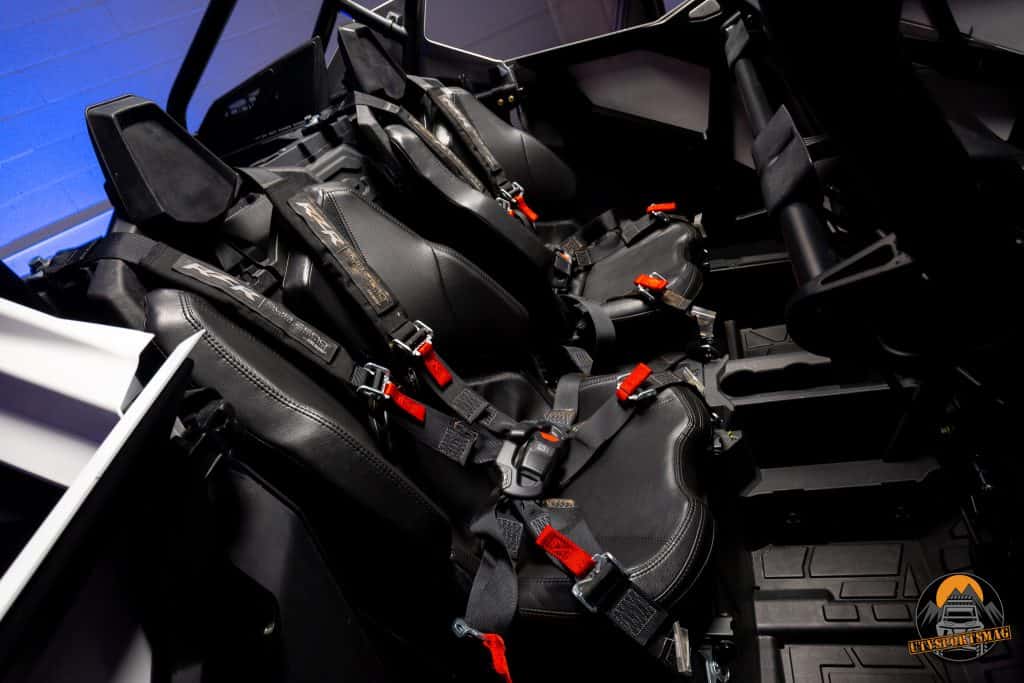 My first outing with the new RZR PRO XP 4 was a big one, as I chose this machine to be my chariot for our 3 day-300 mile adventure with FATCO, and I chose it for one specific reason… the back seats! While it would only be Elizabeth and myself in the PRO, the ability to pull out the rear seat backs and fold the bottoms down flat made this the perfect vehicle for carrying all of our camera gear and luggage for the trip. Once converted to a 2-seat cargo-carrying machine, the 16 cubic feet of storage space easily swallowed everything I could throw at it, including two five gallon Giant Loop Gas Bags. The integrated tie-down points were actually accessible (and usable with normal tie-downs) to easily secure everything so we wouldn’t lose our valuables when I’d inevitably revert to driving like a hooligan. The machine was all stock except for bolting up a set of 32×9.5R15 EFX Motovator RT tires on 15×6 KMC XS234 Addict 2 beadlock wheels, which bumped the ground clearance from 14.5 to 15.5 inches, and I much prefer the handling characteristics of the Motovator RT over the OEM equipped 30 inch Maxxis Carnivores.

While it was clear the storage solutions were going to work out great, we rolled out of the hotel parking lot to begin the adventure and I could only hope that the new PRO XP 4 would provide a fun driving experience over the next 3 days. We dropped off the pavement into the dirt, and entered a tight and twisty sand wash that immediately put the PRO XP 4’s chassis and suspension to the test. From deep ruts to bermed corners, the PRO responded to steering inputs with incredible precision and my comfort level with the new UTV rose rapidly—at least until I came around a blind corner that dropped into a steep washout, where I stuffed the front tires into the near vertical face of the opposing side at speed. As we hit and subsequently launched out of the washout, I watched Elizabeth whip forward and smash backwards into the seat (sorry babe) and all I could think of was how sad I was going to be having to tell Keith and Kyle that I ripped the front suspension out from under this thing at Mile 3 of our 300 mile ride. But to my surprise, everything felt perfectly fine as all four tires were back on the ground and I was back on the gas. 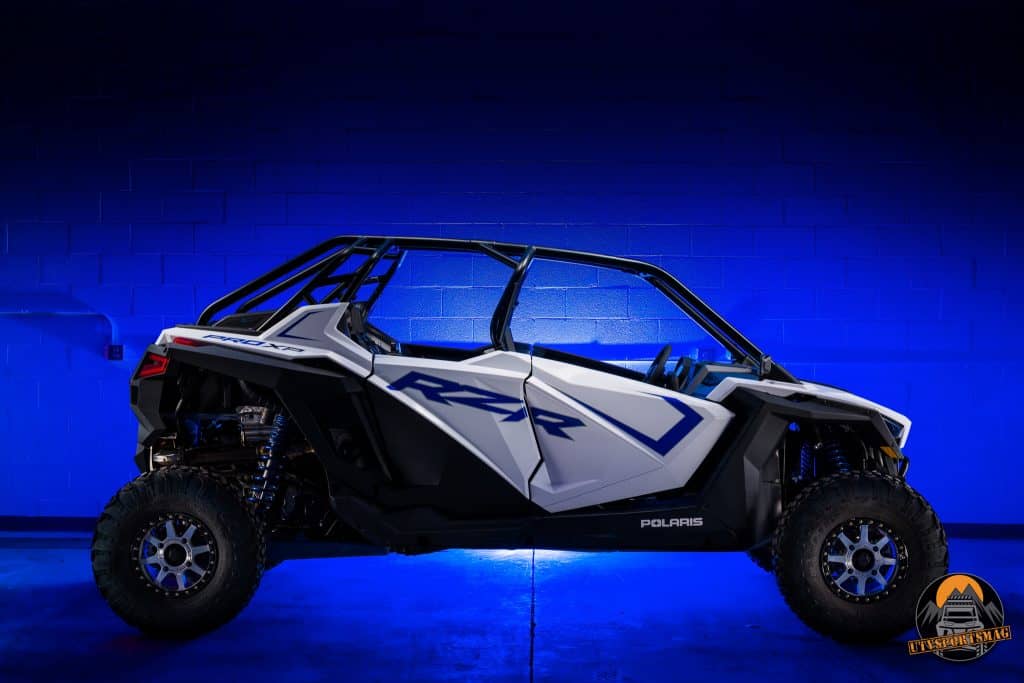 Talking about the strength and durability of this new chassis, since that first big hit I’ve successfully completed the 300 mile FATCO ride, I’ve ridden 100 very rough miles from Henderson, NV to the Pioneer Saloon and back, and have taken the PRO XP 4 on numerous short blasts around the desert of Lake Havasu, all without a single failure or fault. Polaris claims the PRO contains the strongest chassis ever to be built in the RZR lineup, with the PRO XP 4’s chassis offering a 125” wheelbase, which is six inches longer than the old XP 4 Turbo and is now a one-piece design (minus the bolt on roll cage). This new chassis combined with a lower seating position and much better driver ergonomics makes this new UTV feel unbelievably stable in every situation I’ve yet to find myself in. Even with the longer wheelbase, navigating the tight turns of the cliff-edge trails we found ourselves on throughout southern Utah was effortless, and the turning radius is very good.

The new seats are way better than the old RZR seats that have been around for too long, but are not quite as supportive as a quality set of aftermarket seats… That being said, I wouldn’t feel the need to run out and immediately replace the seats like in the past, and the OEM equipped 6-point harnesses are comfortable and secure besides having retractable shoulder belts. There’s nothing more unnerving than when they don’t lock in a heavy impact and they unexpectedly allow you to be thrown forward and away from the seat back, but they are still much safer than a 3-point automotive style seatbelt while allowing you to reach the many storage compartments across the dash without having to remove the belts. The seats and steering wheel both are highly adjustable, and the steering wheel both telescopes and tilts to be in the perfect position no matter your size. The interior of the PRO XP 4 is easily the biggest improvement over previous RZR models, and makes it so much more enjoyable to spend long days behind the wheel while comfortably controlling those 181 horses from the ProStar power plant.

And very controllable that power is; Polaris completely redesigned the CVT transmission for the PRO XP line-up, with improvements to airflow and cooling as well as the actual operation of the clutches. One of the biggest improvements felt is the belt engagement when taking off from a stop, or crawling through rocks at low speeds. Gone is the chattery engagement from previous models, and the power curve stays very linear all the way through the top end. Even with 181 horsepower, the PRO XP 4 doesn’t feel fast, but look away from the speedometer for a moment and it’s easy to breach 80 mph without even realizing it. The power is that smooth, and the chassis provides so much control that it’s almost effortless to raise the pace to a level that would’ve been white knuckle driving in an XP Turbo, or even a Turbo S… At least until you find the big bumps. 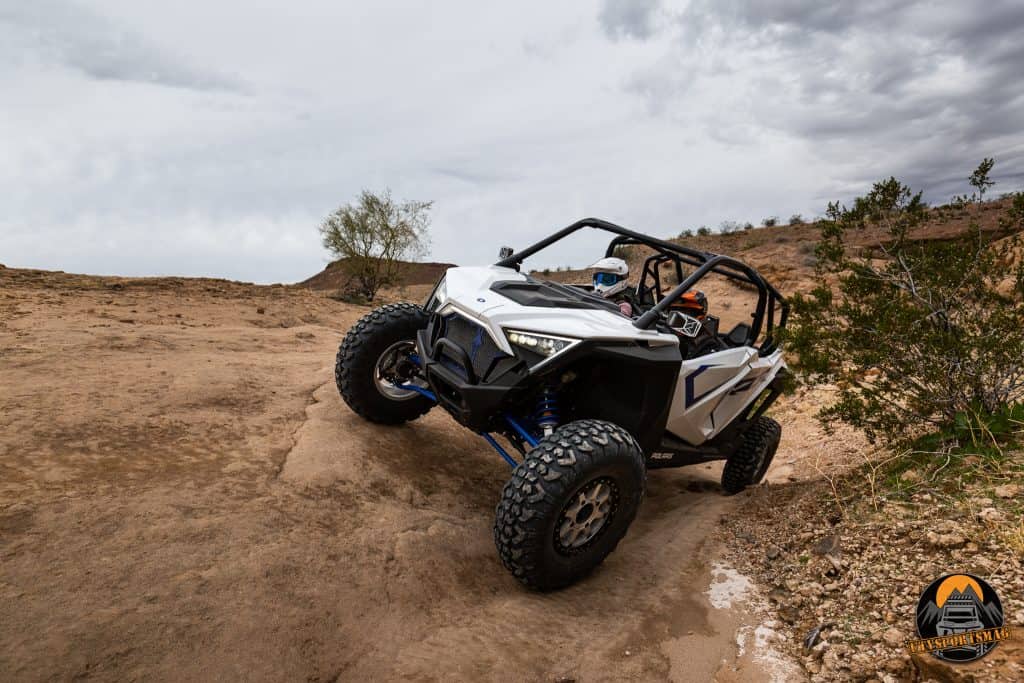 The Walker Evans shocks that came equipped on our base model PRO XP 4 perform extremely well, especially when traversing rocky terrain, small whoops, and chatter bumps. They work in unison with the new chassis to provide predictive control allowing massive drifts and other hooligan activities with complete control, and also provide a very comfortable ride when just cruising trails with friends and family. That performance does seem to deteriorate over very long stretches of chatter bumps, I’m talking many miles of SXS chop, but that will happen with most shocks as they get hot enough to boil water and blister my fingers as I try to pull a few clicks out of the compression damping. Bottoming resistance is all that this particular setup lacks in my opinion, where it fails to hold up when trying to skip long sections of BIG whoops, and the suspension bottoms out often when hitting g-outs at speed. However I feel that this could be easily tuned out with a change in spring rates and valving, and the PRO XP 4 performs extremely well overall for a 64 inch wide UTV. 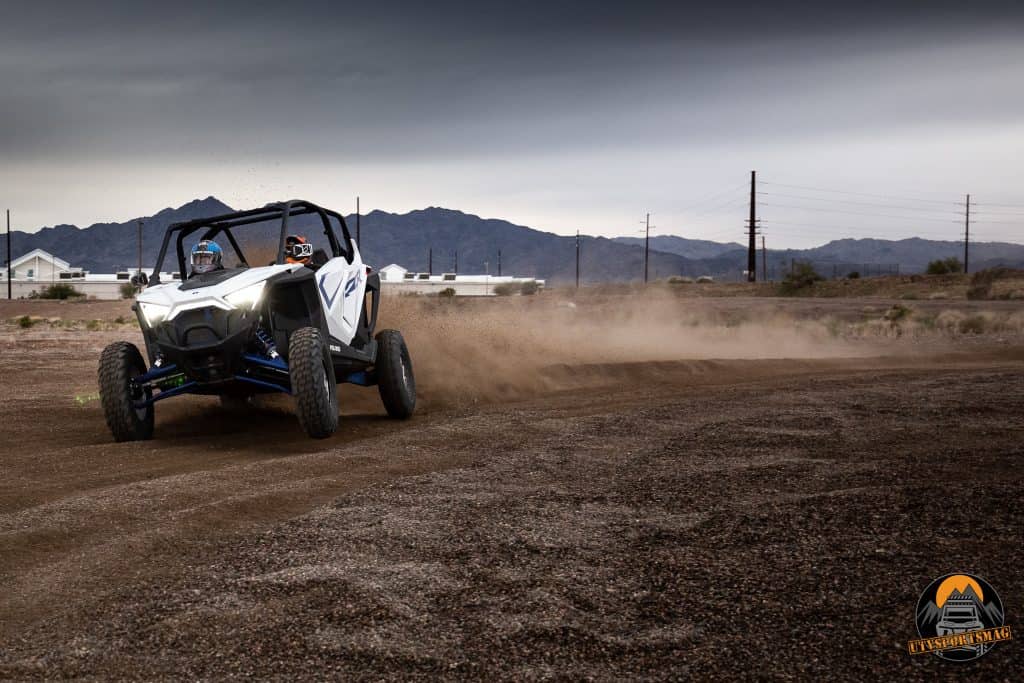 As I’ve said, I don’t want to like this UTV. I’m a fan of angry, harsh, and unforgiving vehicles that just beg to be driven harder and harder, but will kill you the second you have a lapse in concentration. The RZR PRO XP 4 is none of those things, but after so many miles behind the wheel, I love it. It’s comfortable, convenient, easy to drive, and invites you to spend days on end behind the wheel exploring everything that the trails have to offer, all with friends or family seated comfortably beside and behind you…  And when the moment presents itself, the power is there to induce massive slides, drifts, and donuts, fulfilling the needs of my childish hooligan soul. Polaris has done a phenomenal job with the PRO XP 4 by developing a UTV that in bone-stock form very well fulfills the needs of average consumers all around the world, and with a little help from the aftermarket it can easily be tuned to become the desert-bashing/dune-blasting/adventure-ready weapon of your choice. 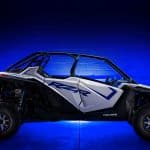 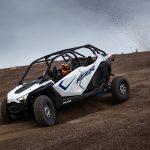 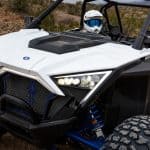 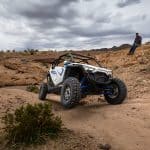 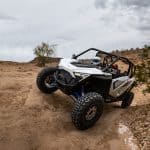 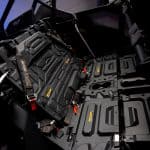 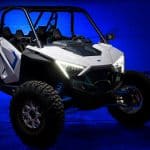