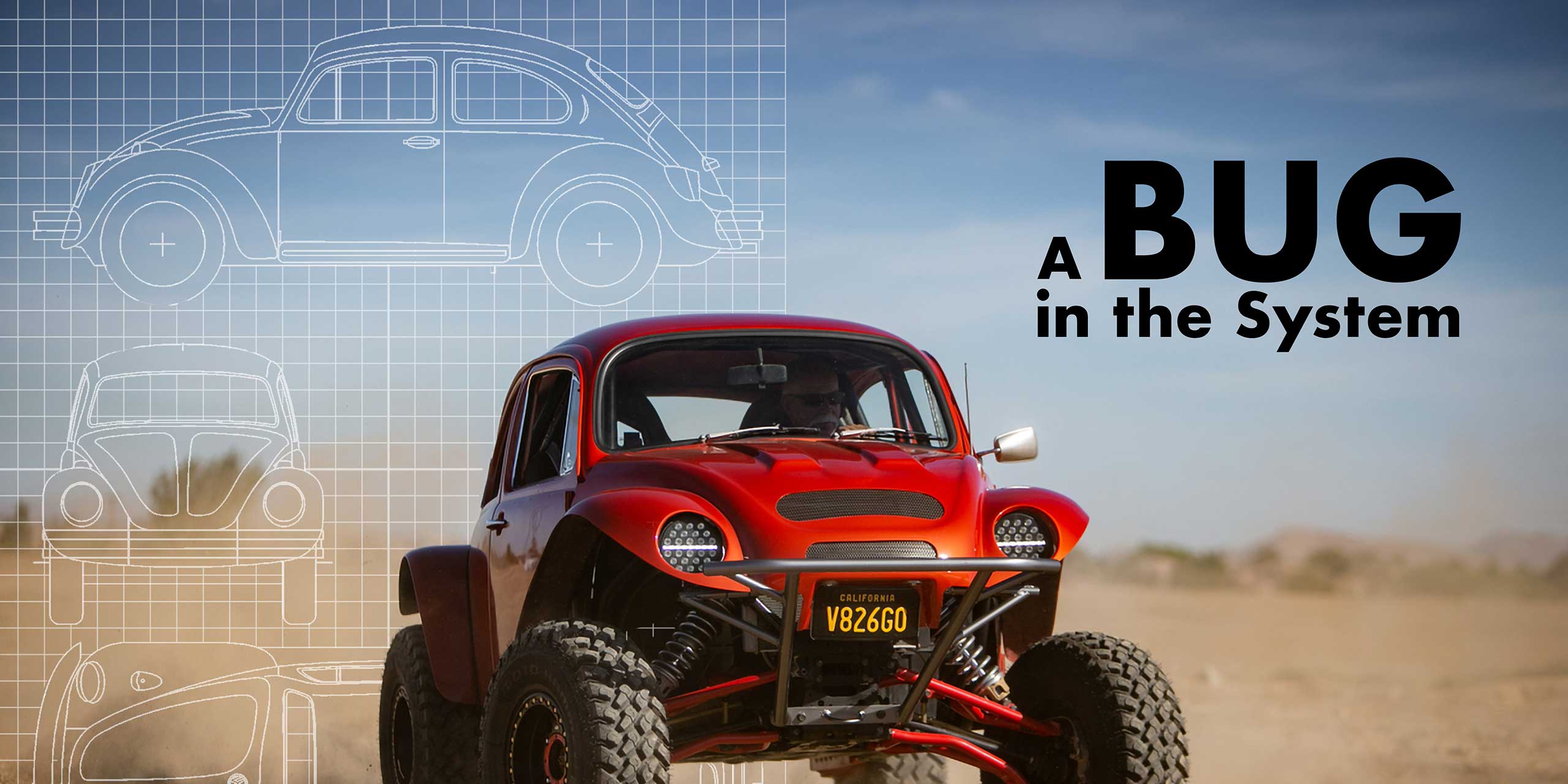 One Man’s Quest to Make His RZR Road Legal

Volkswagen Baja Bugs have been an iconic staple in the Southern California car culture and off-road community dating back to the early 60s. In the beginning, they were a cheaper alternative to pricey Meyers Manx kits and owners could modify a stock Beetle themselves to go have fun in the desert.

From racing in Baja to cruising the beaches in Pismo, they became a fascination for many folks at a young age. In Jeff Anway’s case that fascination and passion for the Baja Bug blended with his love for UTVs and resulted in a beautiful 1972 Baja Bug on a 2016 Polaris RZR XP. This isn’t the first Bug Body on an RZR, but it might be the best example we have seen. Over the years, Jeff has built many Baja Bugs, and even branched into fabricating parts on the side for others; bumpers, cages, and side steps to name a few. After a move to Arizona, he was introduced to driving UTVs on the street and really enjoyed practicality. When he moved back to the high desert in California, he found himself wanting to explore more than just designated OHV trails.

But in California, UTVs aren’t legal for road use, including fire roads and many Jeep trails. So one day, he hatched a plan to put a Bug body onto an RZR and register it for the road. The results are nothing short of incredible blending classic looks with modern four-wheel drive and reliability.

Our lawyers don’t recommend we tell you how to swap a Volkswagen body onto an RZR for street operation in California, but we are going to tell you anyway. Technically Jeff’s ride is registered in California as a 1971 Volkswagen Beetle; but aside from the body, everything else is 2016 Polaris RZR XP. As it is registered as a VW Beetle, it retains the original VIN markings and is smog exempt due to its “age.”

Jeff and a buddy started with a complete 1972 Volkswagen Super Beetle with a clean title and a slightly rolled 2016 Polaris RZR Turbo XP from a wrecking yard. Then they began to figure out how to fit the body on the RZR chassis. First they stripped the RZR and cut away the damaged roll cage to make way for a new look. 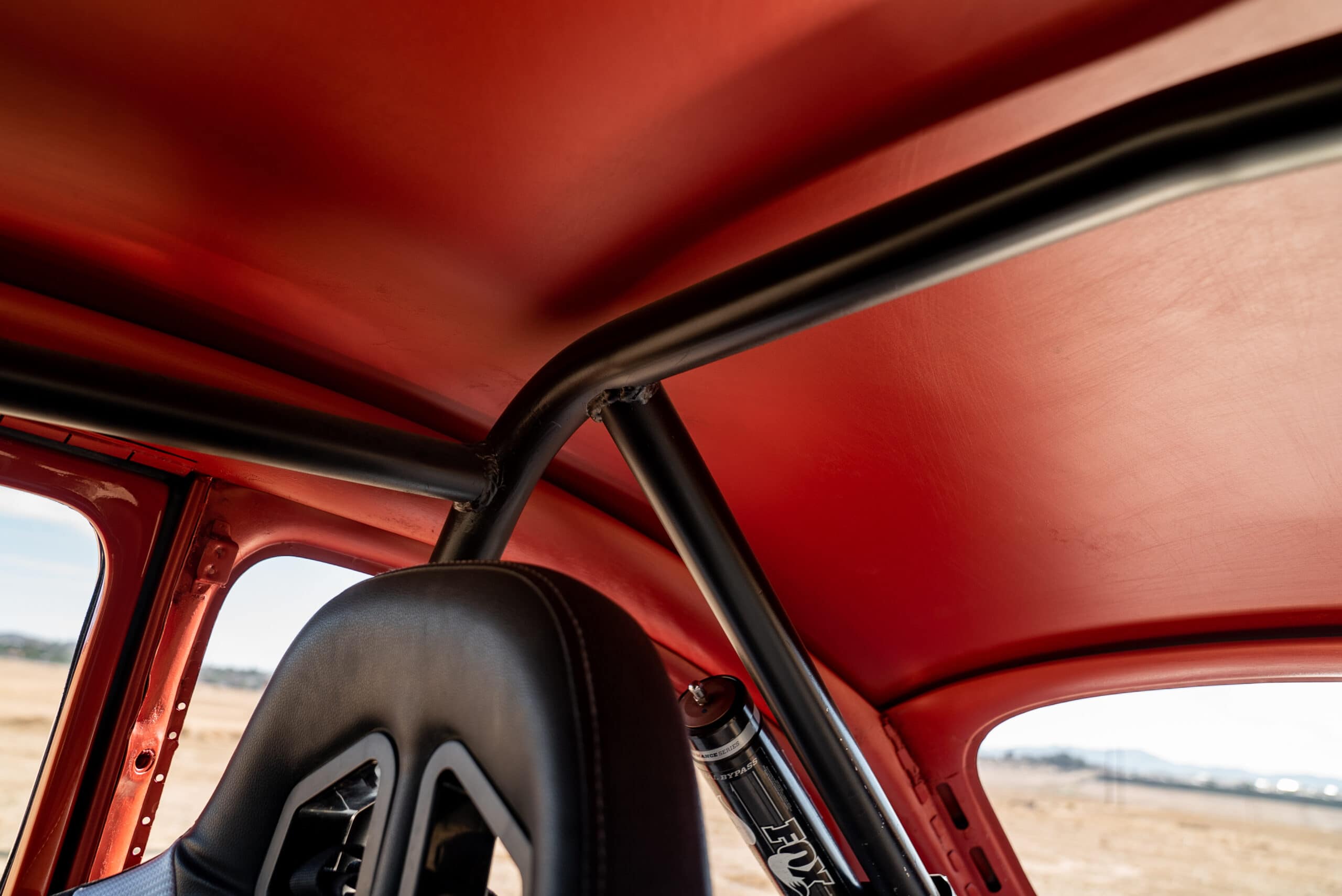 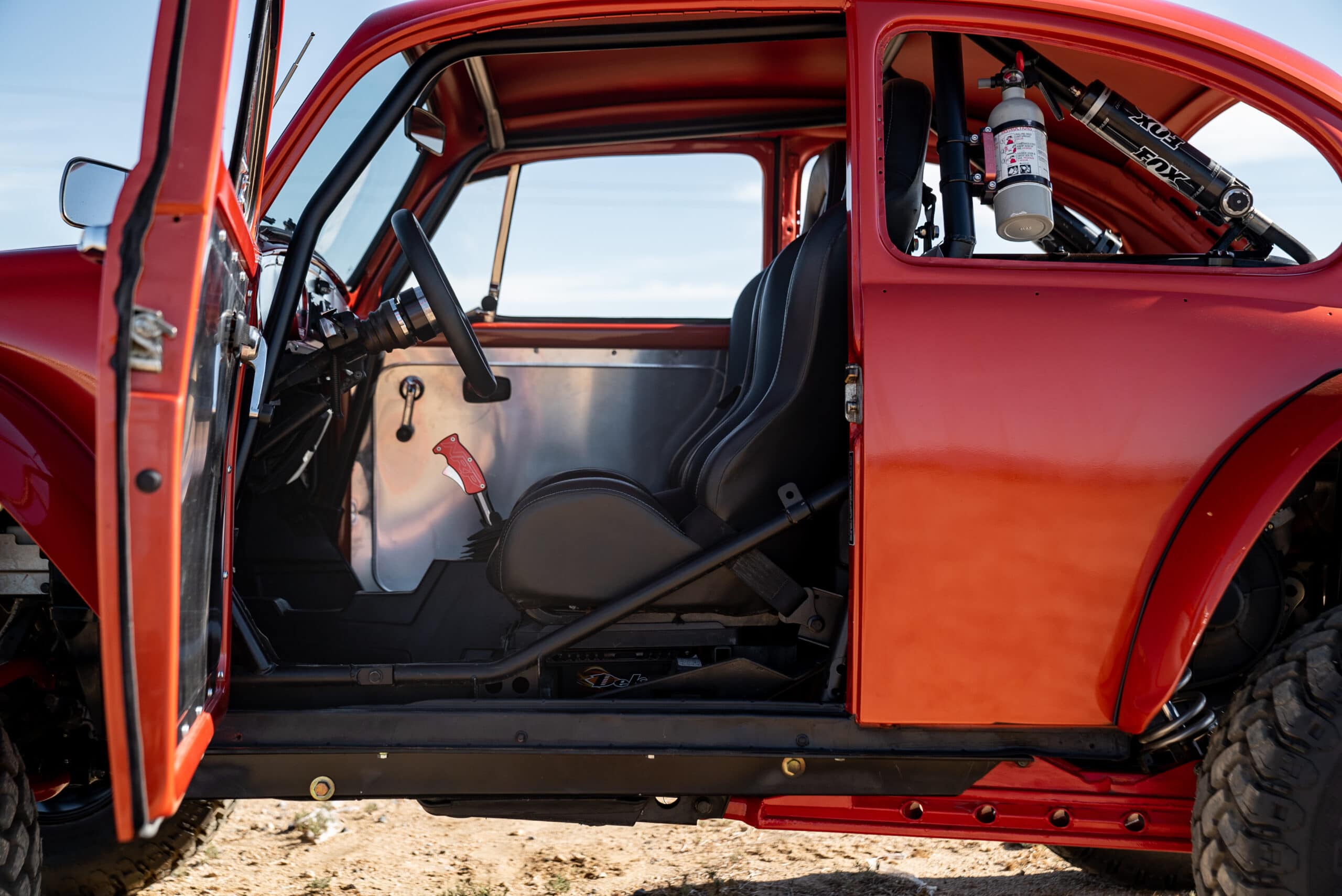 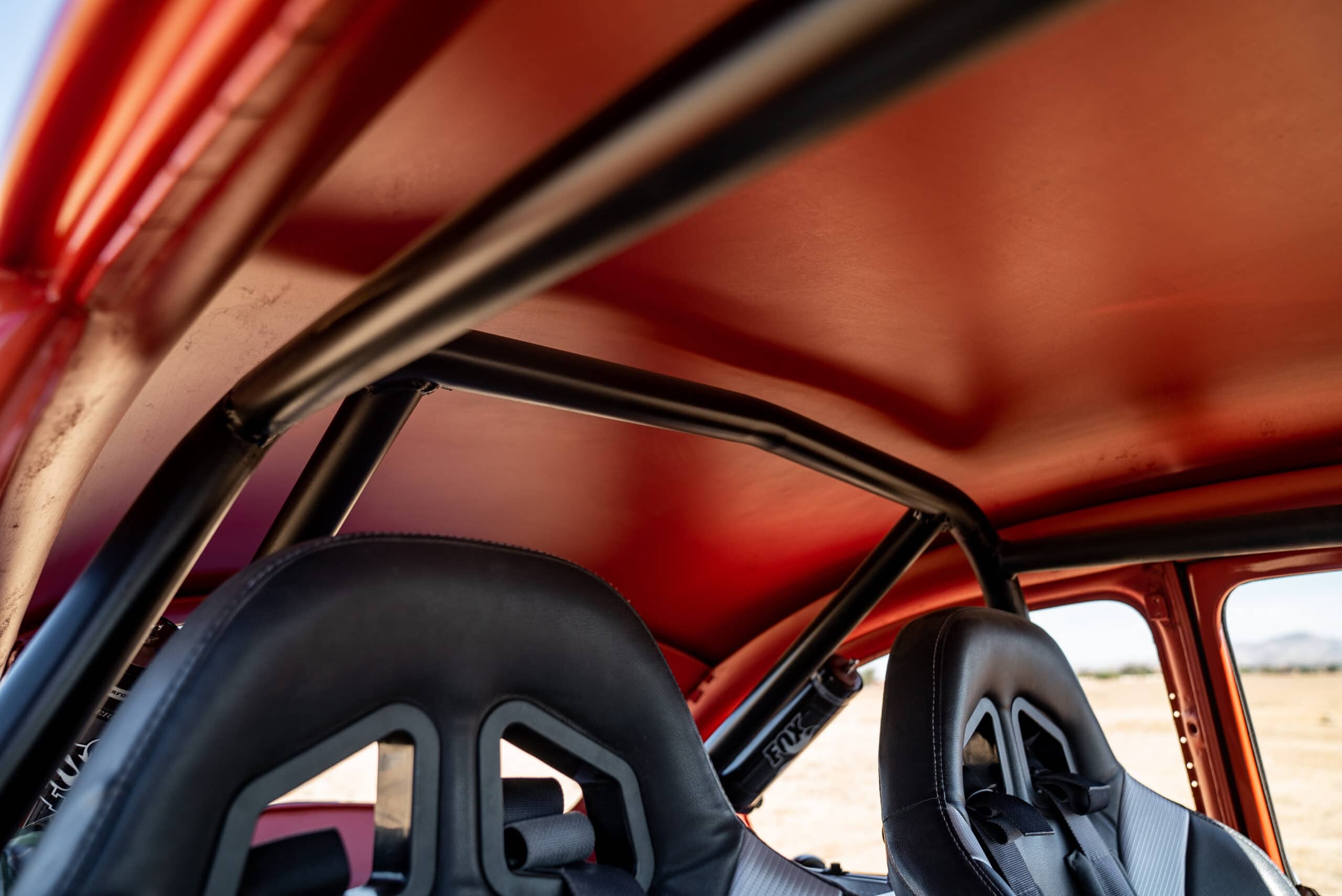 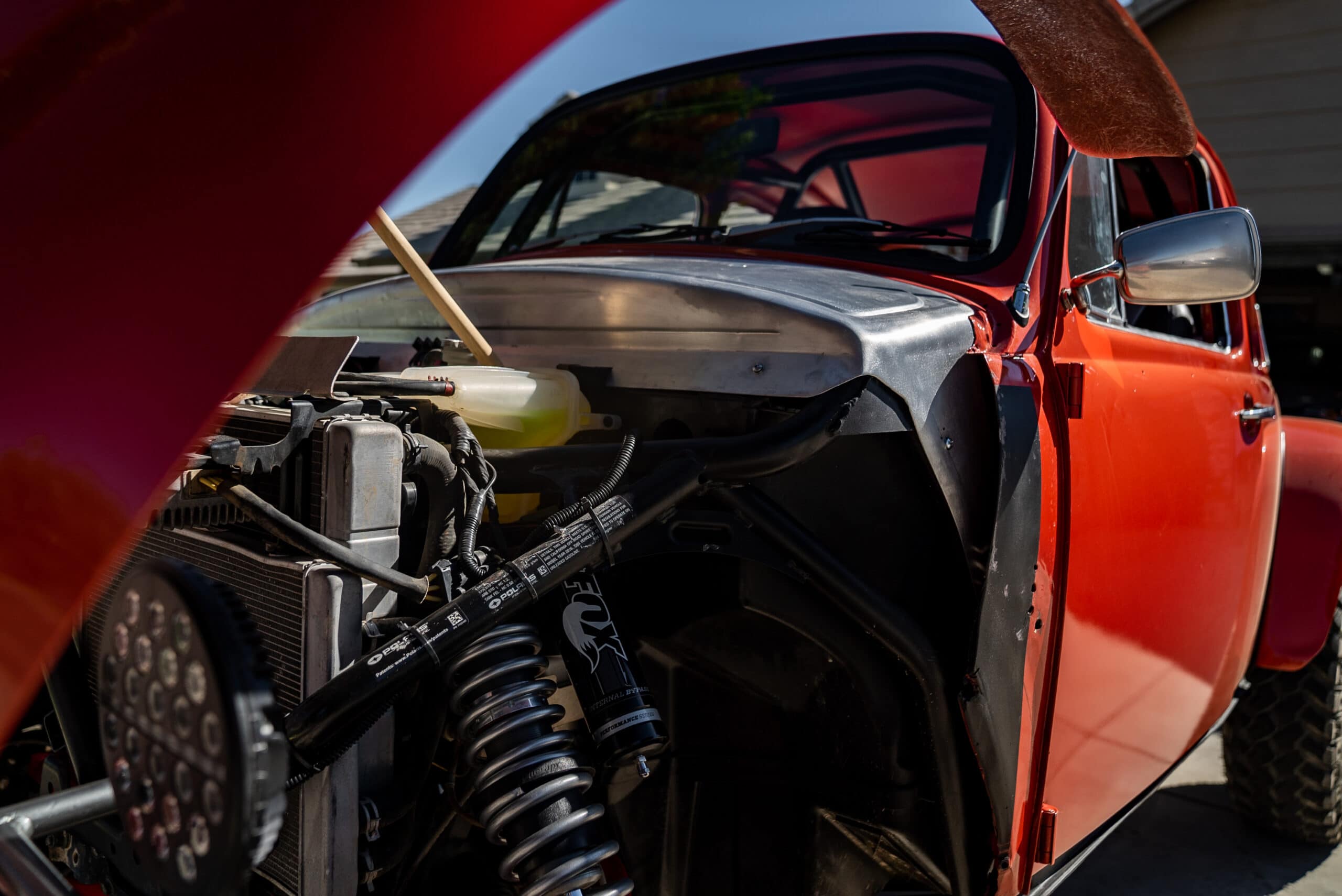 One hurdle was adapting the stock RZR wheelbase of 90″ to the VW’s original 94.5.” Jeff replaced all the lower suspension and tie rods with Super ATV high clearance parts to move the wheels 2″ forward, and the rear trailing arms 2″ back. Typically these parts are for those wanting to run larger tires in the mud, but in this case, it allows Jeff to get as close as possible to the original VW wheelbase. Often, RZR based Baja Bug builds can look odd and disproportionate due to a shortened wheelbase, but this looks just right and makes for a cohesive build. 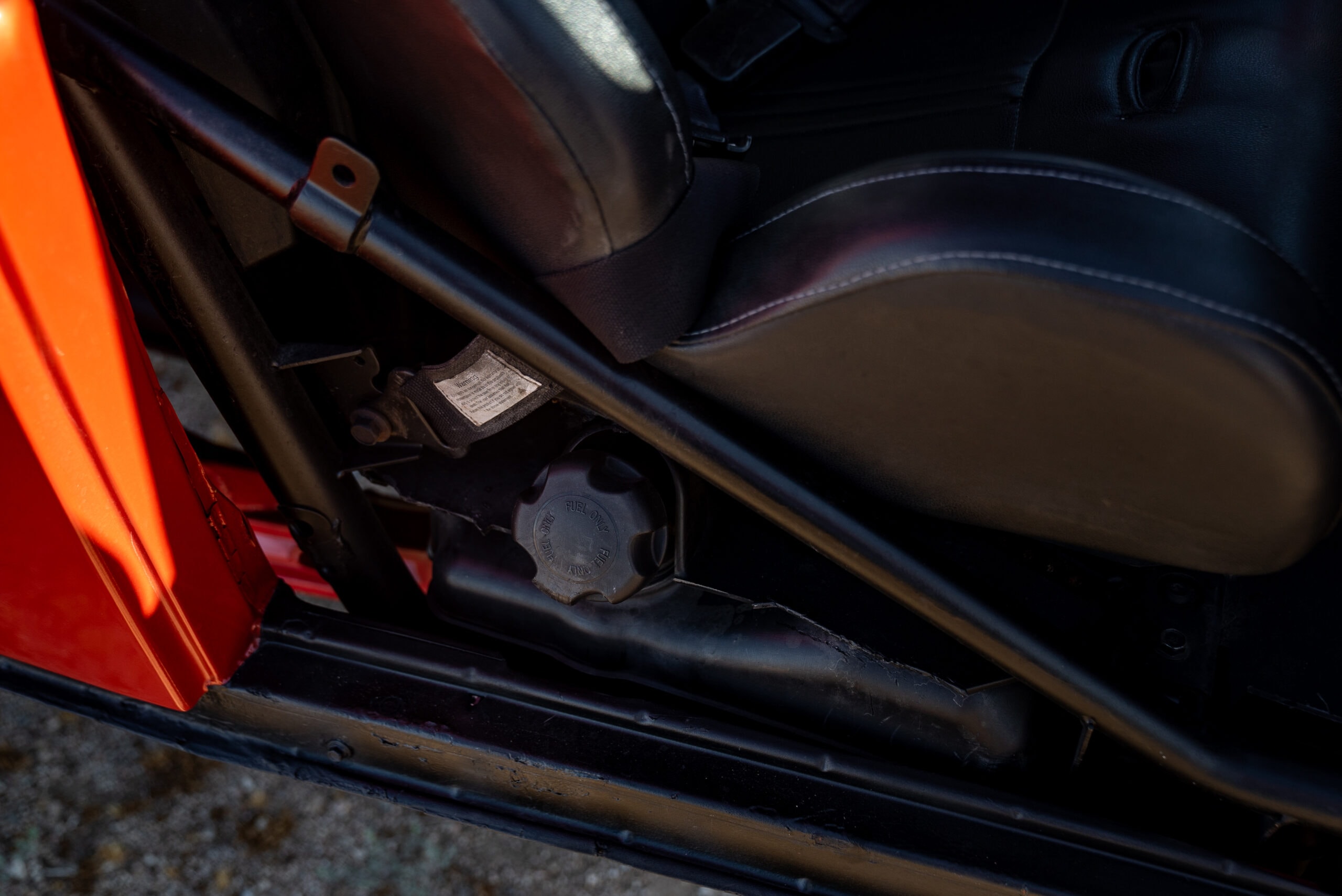 The donor RZR started as a Fox Performance edition, equipped with internal bypass shocks, but it still needed fine-tuning to set the proper ride height and compensate for the added weight. To assist, Shock Therapy handled suspension tuning and setup.

Sometimes we think Polaris had this kind of swap in mind when designing the RZR, because certain parts blend seamlessly. For instance, the steering column fits perfectly under the original VW dash. Jeff took the step of integrating all the factory gauges and original switches for a beautiful OEM finish too. But one visual quirk is always unavoidable; without an air-cooled, 4-cylinder 1600CC engine hanging off the back, things can look a bit unfinished. We have been groomed to appreciate the classic aesthetics of an engine cage and motor slung out behind Baja Bugs.

Jeff’s solution is a creative way to pay homage while being functional. Two aluminum air filters are retrofitted into the original RZR air filter system. From far away, it gives the look of an air-cooled motor. Engine cages are also much more than aesthetics on Baja Bugs, providing another structural support for the body. 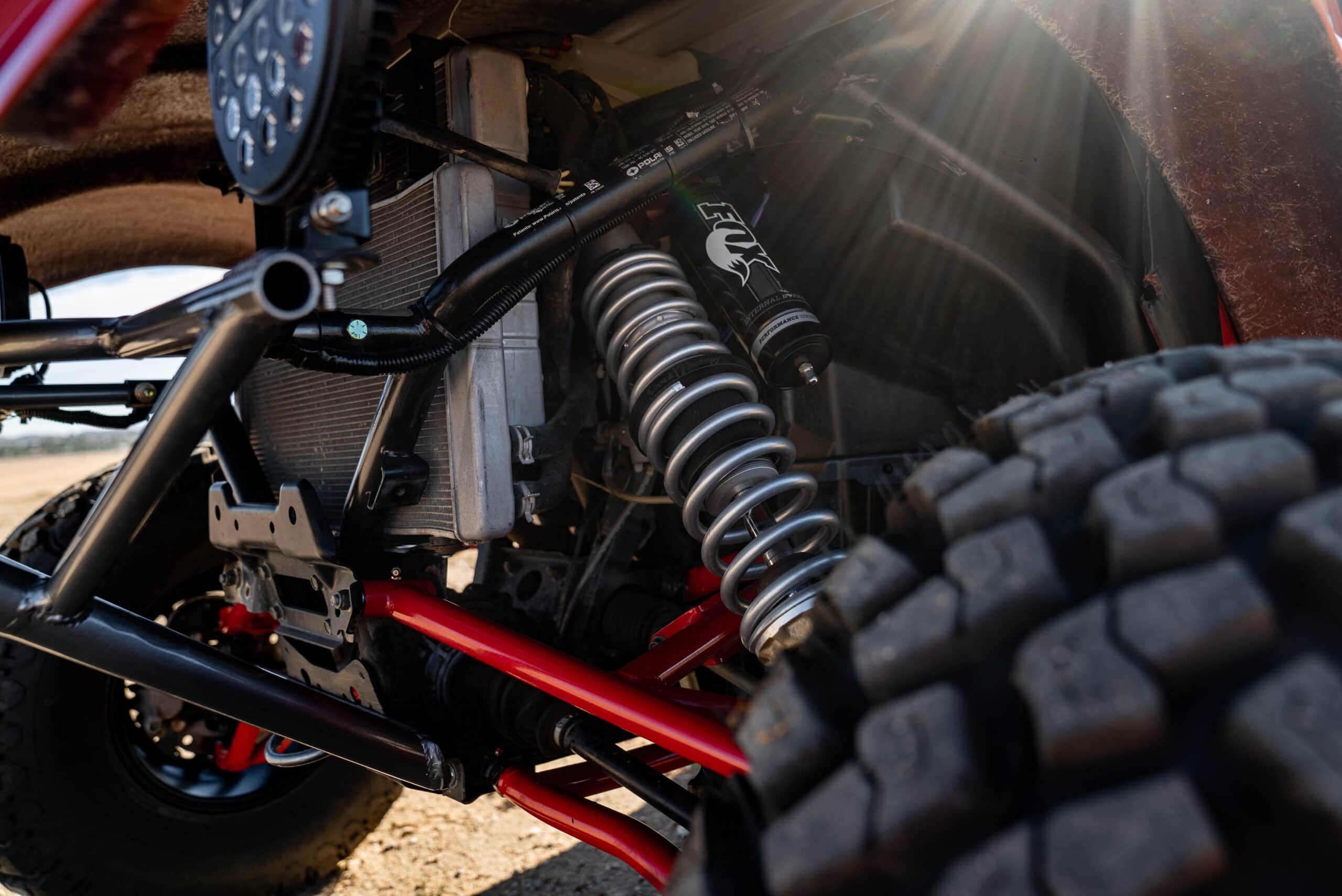 You might wonder, how much does it weigh? A 1971 VW Beetle only weighs 1760 pounds, and Jeff’s build comes in at 1539 pounds, 160lbs heavier than a stock RZR. Weighing less than the original Volkswagen is not too shabby at all.

Another challenge along the way was hot air entering the cab from the relocated radiator up front. It was a bit too unbearable to drive, so Jeff had U 2 Motorsports fabricate an aluminum dash cover to contain the heat. 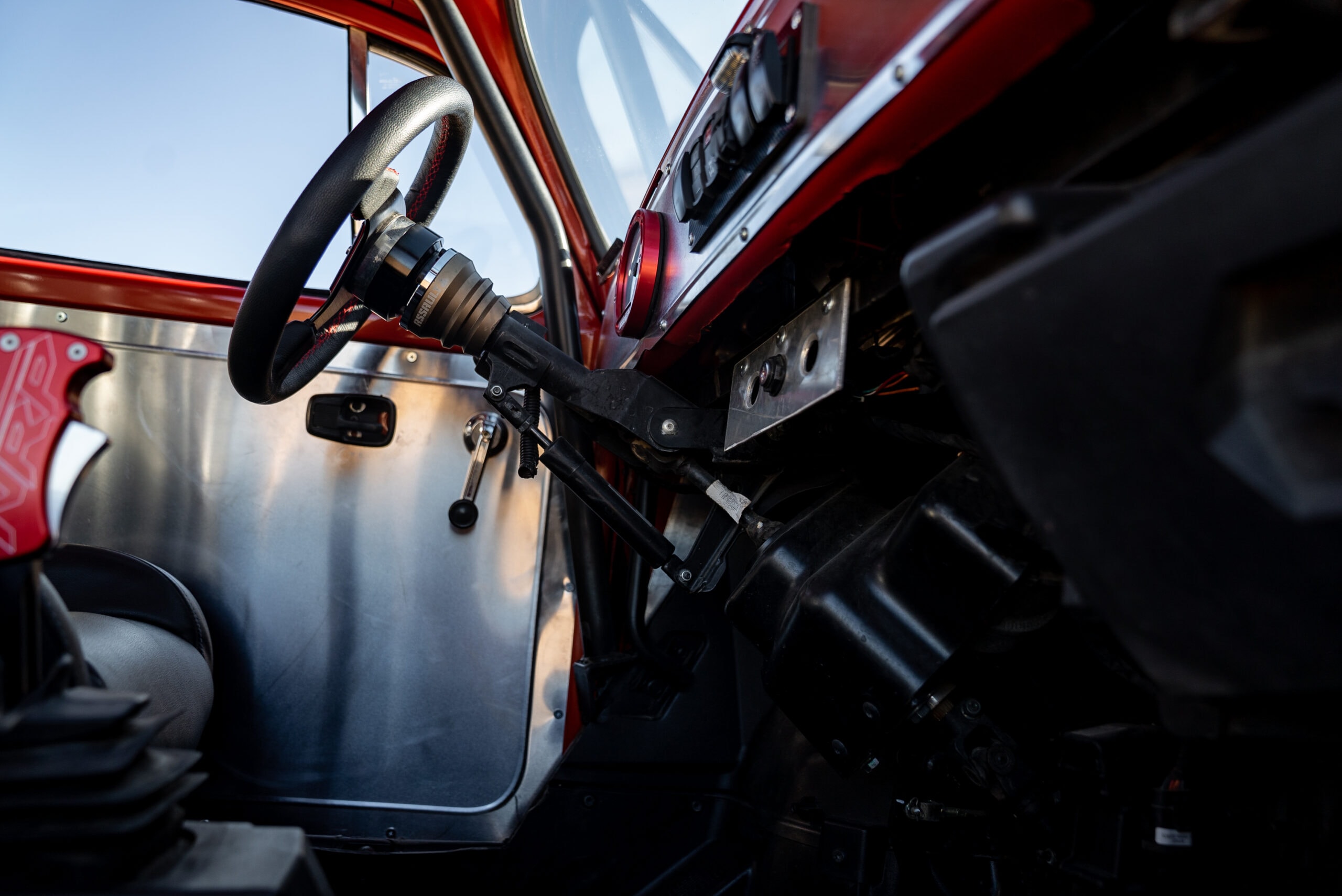 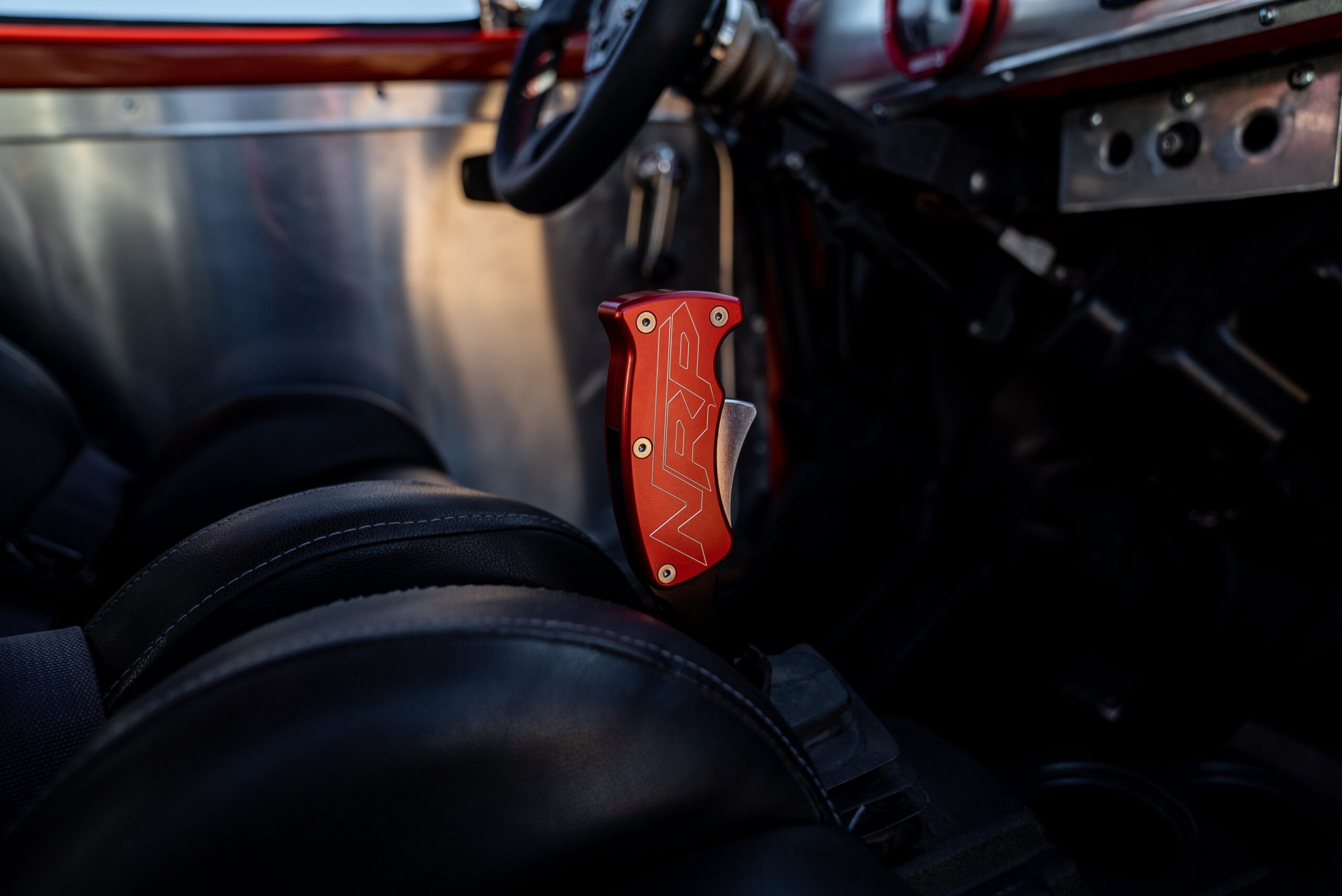 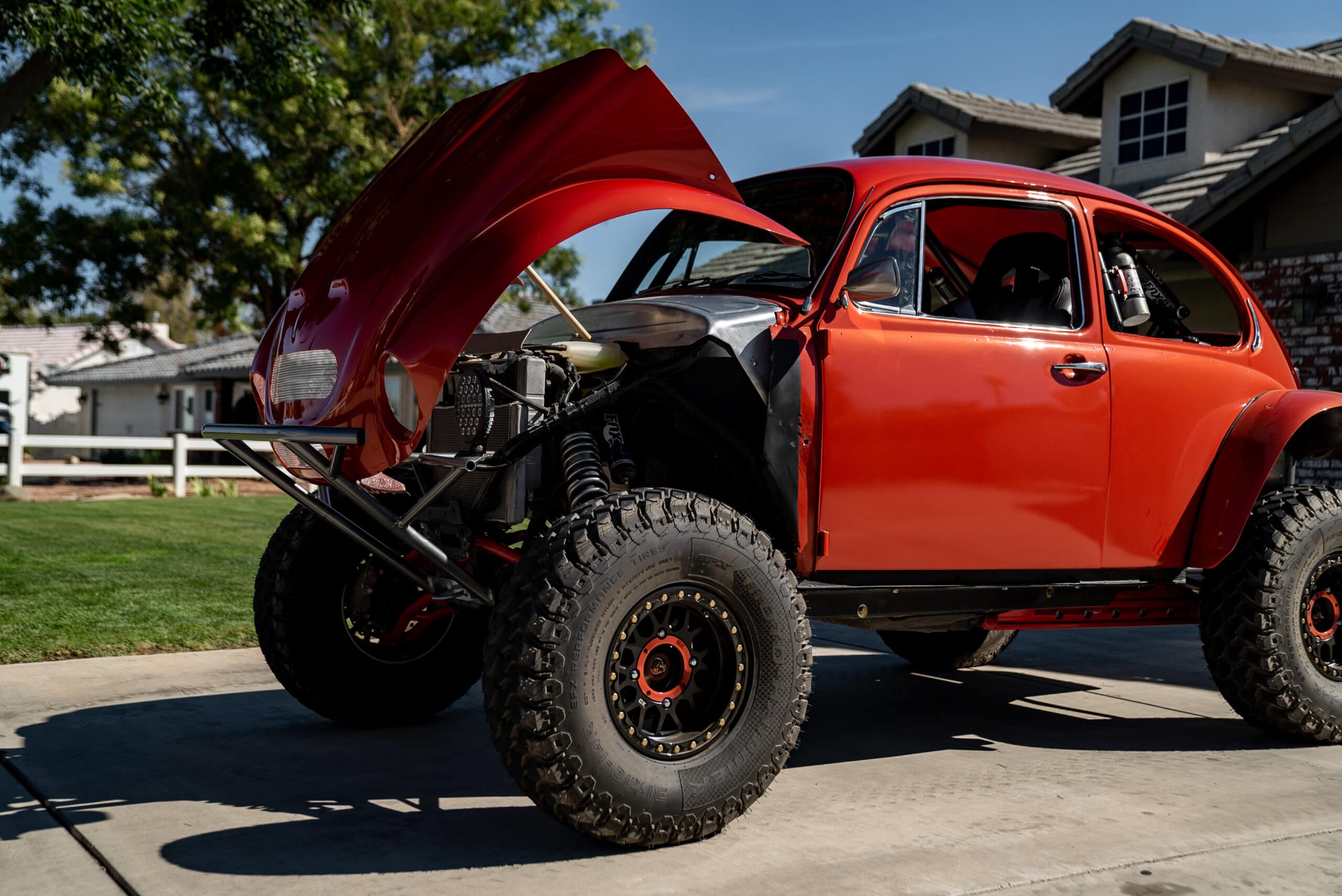 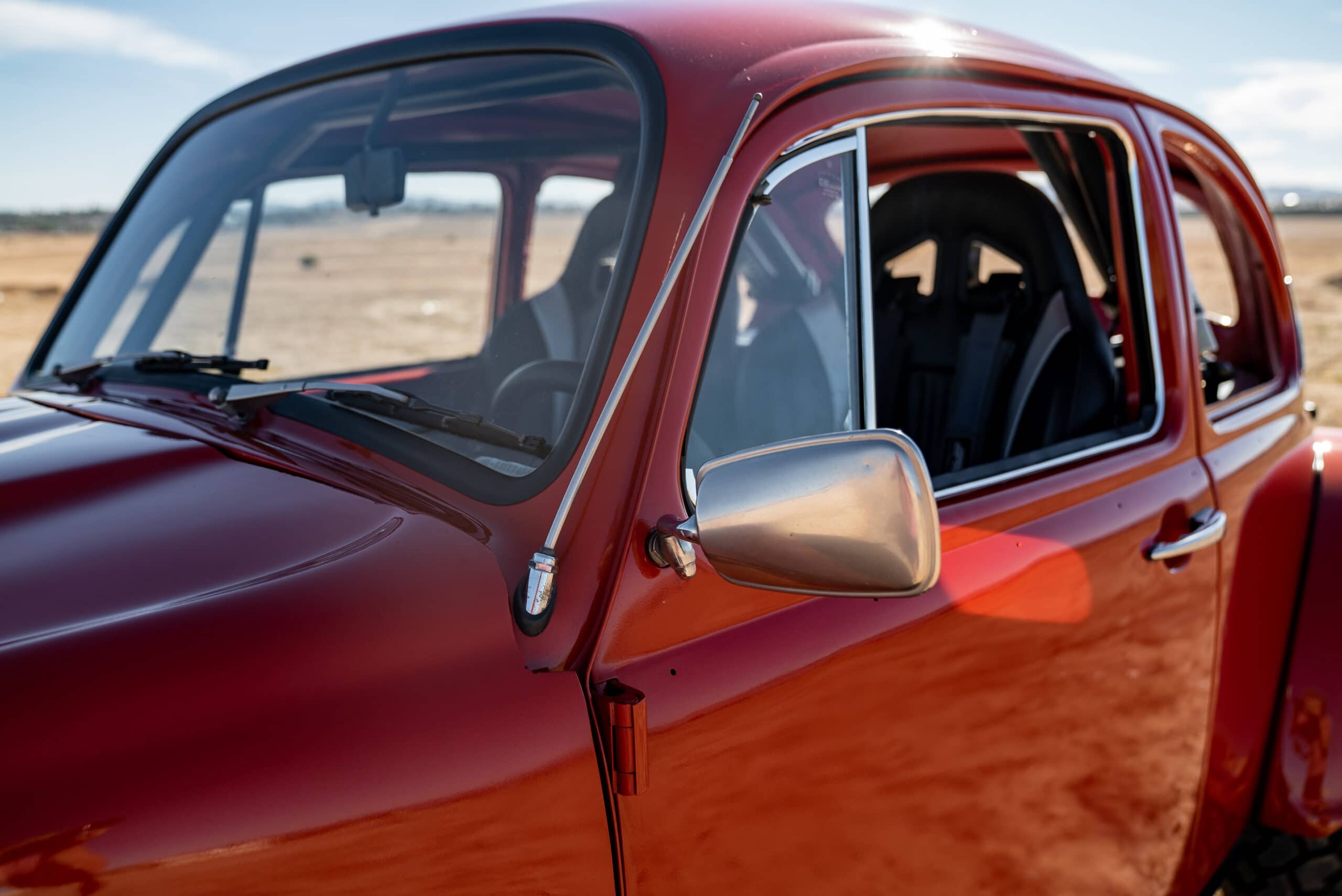 Jeff isn’t a professional fabricator or builder; he is an enthusiast with a passion for all things off-road and willing to get his hands dirty. This Baja Bug RZR build was his solution to limited OHV trail access and opens up more opportunities for him to get and explore more trails in California.

The benefits of four-wheel drive will be a blessing on local off-road Jeep trails. His goal isn’t to drive it on the highway or commute to work, but to enjoy it for what it is. While other similar builds exist out there in the world, they don’t quite have the attention to detail as this one does. We are ecstatic to see Jeff enjoy his Baja Bug, and who knows; maybe you’ll see him out on a Southern California Jeep trail too. 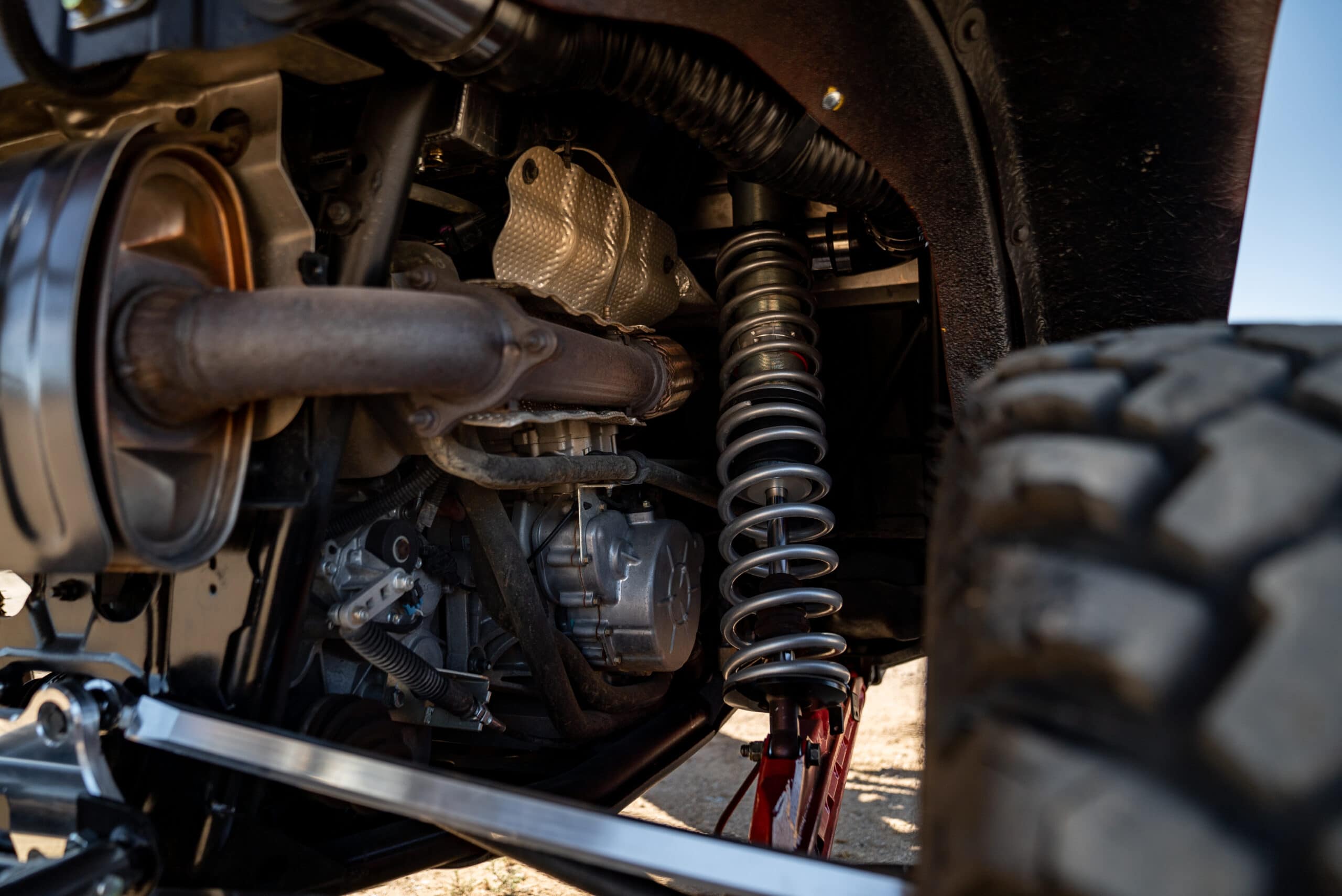