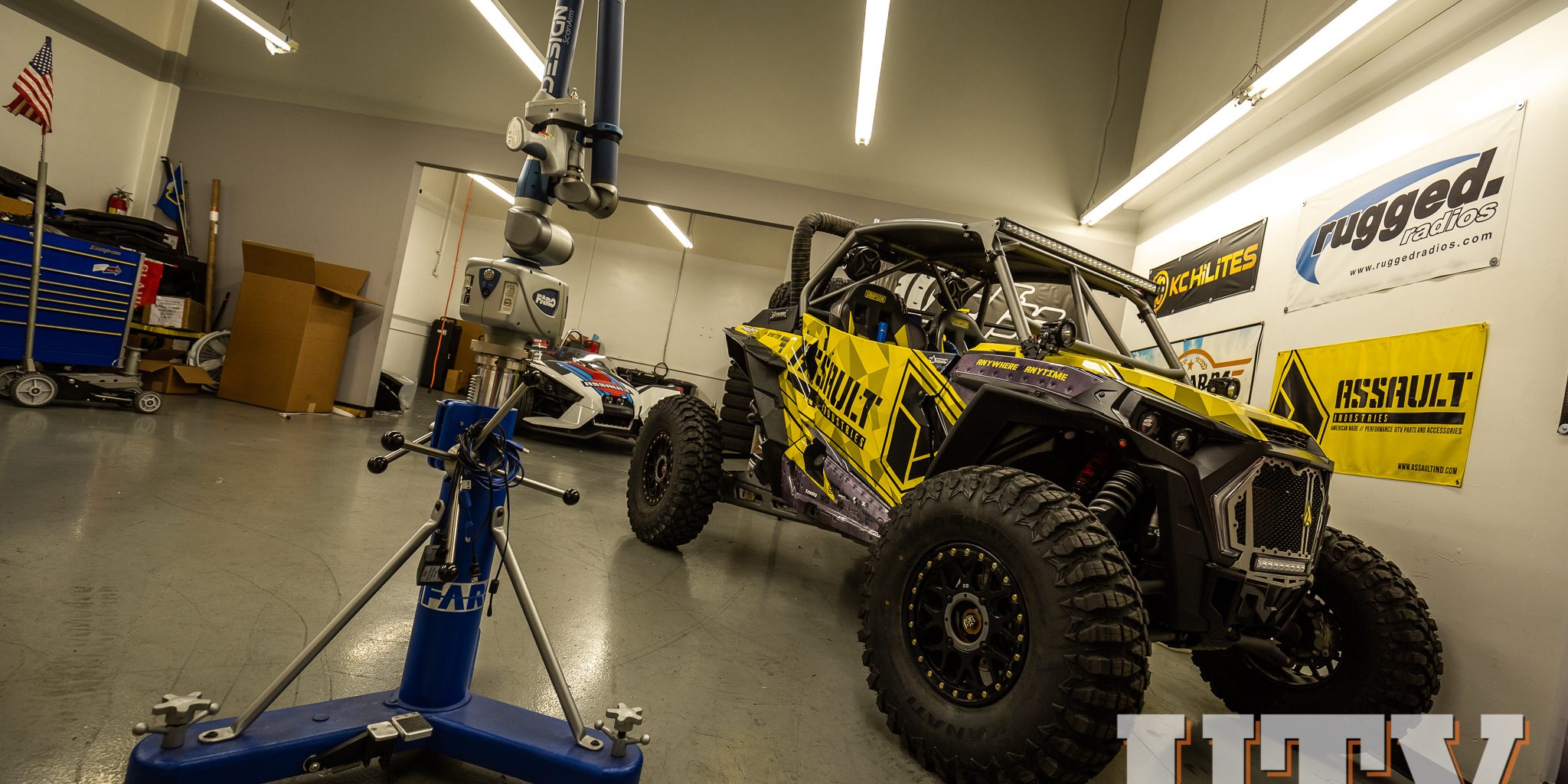 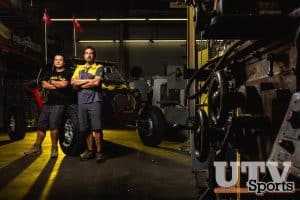 With so many aftermarket companies out there producing parts and accessories for UTVs, it’s not often you see a company start up and take a rocket ship ride to the top of the market. But after meeting Marcelo Danze and Manuel Soto, the brains behind the operation at Assault Industries, it’s easy to see how they’ve accomplished this feat.

From the time Marcelo was a kid, he began learning design and manufacturing from his father. Always thinking, designing, building, and testing, he grew addicted to the process of taking an idea and turning it into reality. From building custom surf racks for his bikes, so he could carry his boards to the beach, to making his own aluminum a-arms, skid plates, and other parts for his RC trucks. 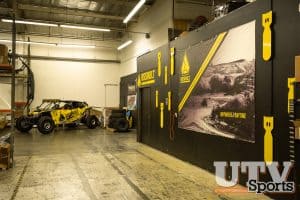 All of this eventually led Marcelo to start Innovative Metal Designs. Customers come to him with a part they need manufactured, and he handles everything from raw material to final assembly, and sometimes even packaging ready for distribution. After years of manufacturing parts for Honda, Yamaha, Harley Davidson, B&M Racing Products, Hurst Shifters, and numerous aerospace and medical companies, Marcelo began to crave something different. “It’s very hard to work with these aerospace and automobile companies. It seemed like everyday I was on the phone with an engineer.” He continues, “These big companies would hire these kids right out of college to design parts, and I would end up having meeting after meeting explaining to them how to design the parts to be manufacturable or machineable. I finally thought to myself, I should be making my own parts! I was helping all of these companies with design, why not do it for myself!” 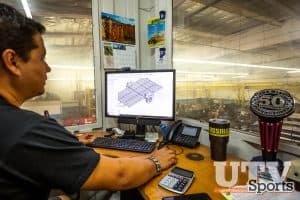 After some time contemplating what direction to go in, almost deciding to start his own mountain bike company, Marcelo was inadvertently pushed into a new and rapidly growing industry. His brother called him one day to come out and test his brand new Polaris RZR 800, and from then on he’s never looked back. “I had such a blast driving the RZR, and right there I knew I was hooked in the side by side business! At the time I already had a lot of experience with Yamaha Rhinos as we supplied many parts for it, and also worked on suspension parts, ‘bling bling’ accessories, and many other components. So why not design new aftermarket parts for the other side by sides on the market?” 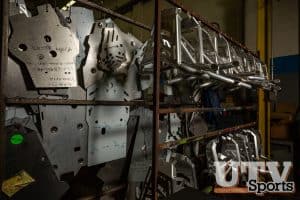 Assault Industries was born in October 2012, starting with only a couple of different parts. “The first parts I knew we needed to develop were mirrors, as there was nothing cool on the market. Only a few cheap plastic ones.” Marcelo went to work with Manuel, his head engineer and partner, and started to design a billet aluminium mirror. “The cool and innovative factor was the breakaway design. At the time, there was nothing out there like it!” Marcelo beams. The other products on the short list that they developed in the beginning were radius rods, “We saw a big need for these, but no one trusted us and everyone thought we were crazy for using billet aluminum for radius rods. However, we had tons of experience using these materials in manufacturing parts for the aerospace and automotive industries, so I knew it was the perfect material for them.” 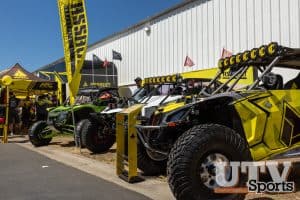 The big break out moment that Assault needed came as an invitation from Fred Brayton, who was with Pro Armor at the time, to come to Sand Sports Super Show and set up a small 10’ x 10’ booth to show off and try to sell their new products. Bringing only these new innovative mirrors and a few sets of radius rods, Assault Industries was a hit. “The crowds went crazy with the aluminum parts, and we sold out all of the mirrors!” Marcelo says, “From there Assault continued to grow… and I think the products we developed gave the customers trust in Assault.” 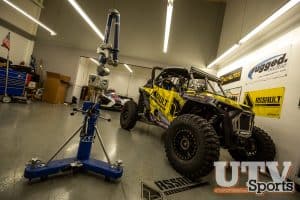 Now one of the leading aftermarket part manufacturers in the UTV industry, you can find Assault Industries products on some of the biggest show builds in the industry, as well as on customers’ cars all around the world, and still Assault Industries continues to grow. Currently employing 12 people full time under Assault, and 35 more under Innovative Metal Designs, the shop space takes up a total of 18,000 square feet. A huge catalog of parts are produced in house there under Assault, from mirrors and device mounts to full doors, bumpers, and suspension components, in addition to the hundreds of other products produced for different companies in the UTV industry and beyond. “We are always happy to help! Even if it means helping the competition.” says Marcelo. “We have been producing parts for other companies for over 15 years! So I think we are doing something right…” 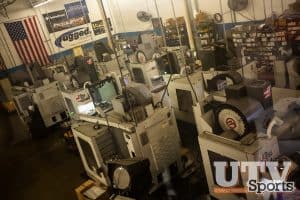 The shop is packed full of CNC mills and lathes, a huge CNC turret punch press, manual mills, drill presses, band saws, a giant press brake, tubing benders, welding stations, and more. It’s a fabricator’s dream. Add all of that to final assembly stations, packaging stations, plus the offices and tons of inventory, and the 18,000 square feet of space begins to feel pretty crowded. “We are currently looking at the building next door to expand into early next year… Which will add another 25,000 square feet of space!” Marcelo exclaims. “That sounds like a lot but we need it, especially now that we’ve developed the Tactical Hauler folding trailer for UTVs… We have other ideas for it as well, and as we continue to grow the team and develop new products, having the extra space is very important.” 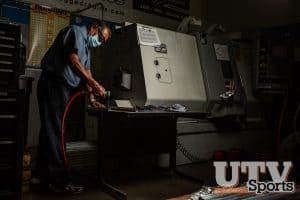 We have no doubt Assault Industries will continue to grow and expand, far into the future. The work ethic, determination, and drive to succeed shown by not only Marcelo and Manuel, but the whole team surrounding them is truly astonishing. Equipped with his FARO Design ScanArm, Marcelo is constantly hungry to get ahold of the latest and greatest UTVs to get to work scanning and brainstorming for innovative new parts that Manuel and himself can design, engineer, prototype and test to put into production. “I am so glad I chose this industry and left the mountain bike idea behind!” laughs Marcelo. “I have met so many amazing people, seen some truly awesome places, and there are always new innovative vehicles on the horizon! My vision for Assault was to attack all terrains… dirt, street, and marine! Maybe even space someday like Elon Musk!” You know those Mars Rovers would look pretty cool with a set of Assault Industries Mirrors mounted on them… 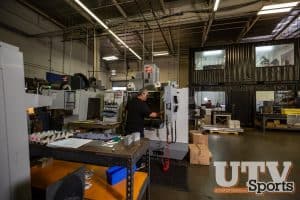