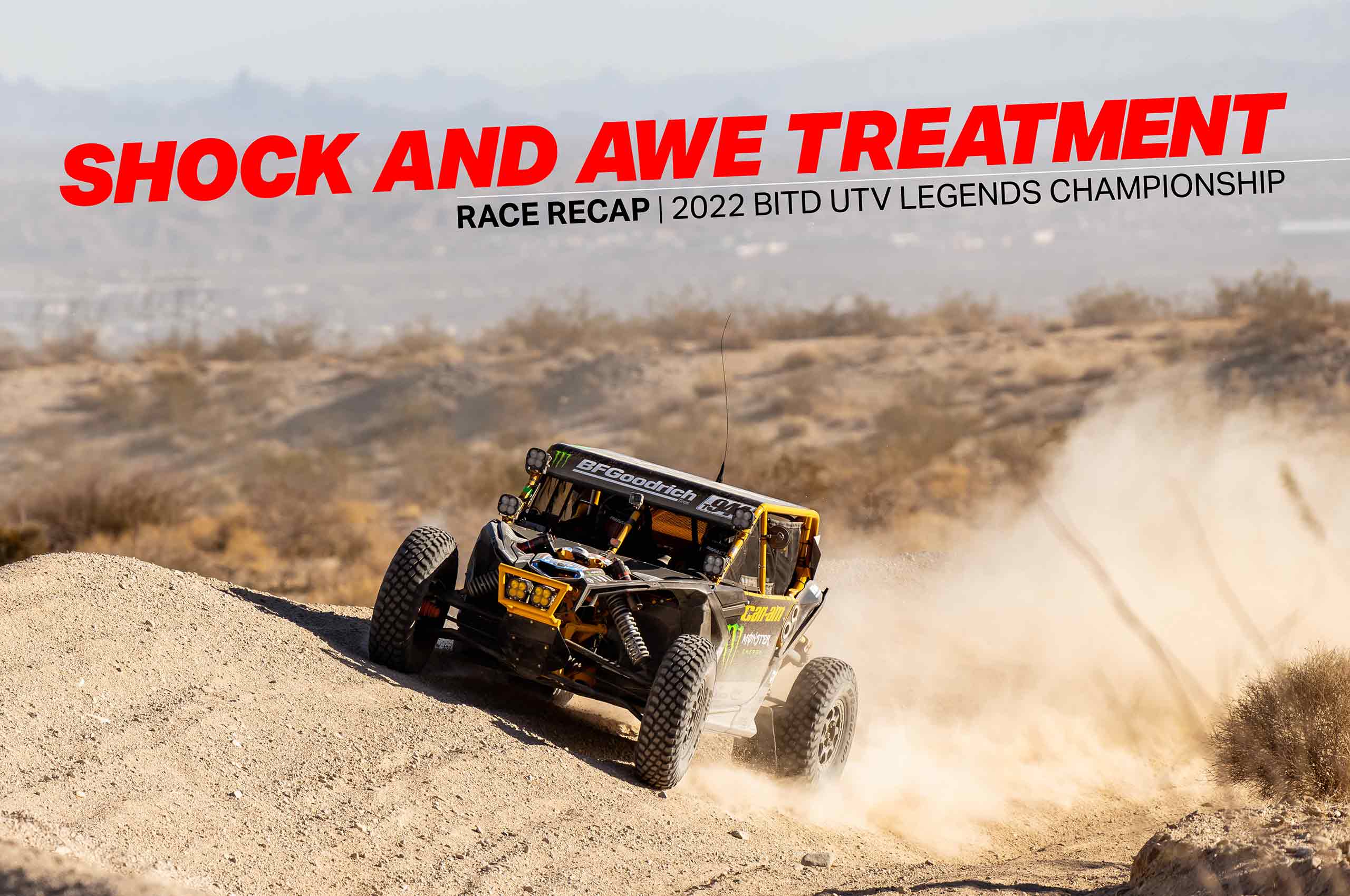 Best in the Desert Raises the Bar at UTV Legends Championship

The Best In The Desert series’ Shock Therapy UTV Legends Race in Laughlin, Nevada has always been a unique format. There is a section of course that runs out into the desert west of town that is filled with rocks, whoops and some very fast fire roads. Then there is the spectator-friendly infield, which you can see from the hills that surround the course. This short course section is filled with deep sand; that sand is what makes it unique. Sand is certainly not unique to the desert, but what Best In The Desert does with it is.

Because it’s sand, the terrain is easily manipulated. That means the short course section of the track is constantly changing. The direction of the start, the amount of turns, the size and shape of the jumps are different every time. Each racer has to relearn every corner again. Some of the racers have tons of short course racing experience, and love the chance to show off their skills. Others simply endure it on the way out to the desert. 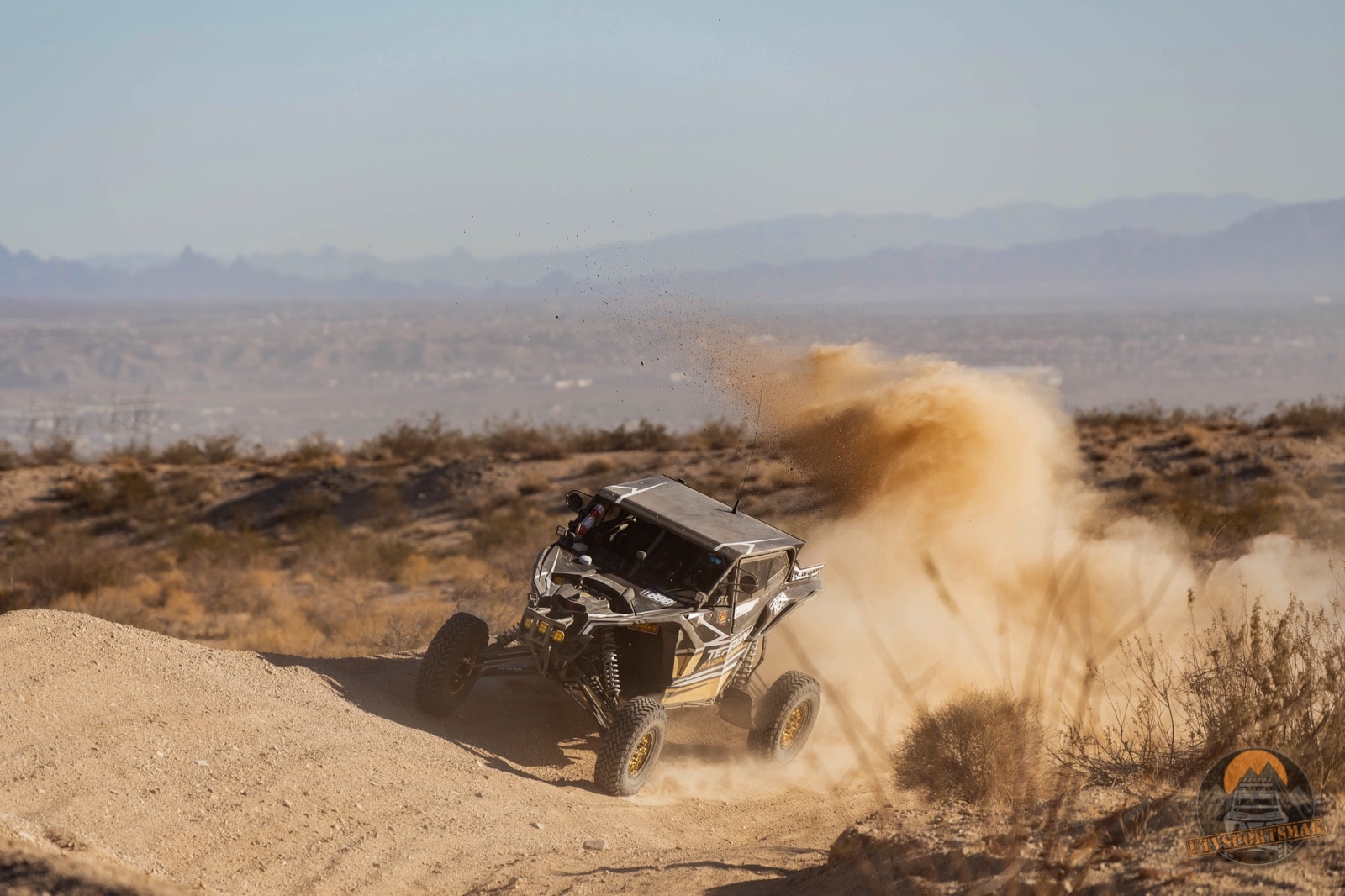 Of course, the infield was a little different this year, but that’s not the only change. If running eight laps full-out was not difficult enough, the length of the race was extended by an additional two laps. Another 34 miles does not sound so bad, but due to the intensity of the race, it added an entirely new dynamic, one that showed in the results. Many of the experienced Laughlin racers know exactly how hard they can push it for eight laps; those who have won in the past typically did it at great expense to their equipment. Tales of smoking-hot CVs, cracked suspension members and squared-off rims are common. Running 10 laps instead of eight put everyone in uncharted territory. The pace needed to outrun the competition while keeping the vehicle in one piece would have to be determined. 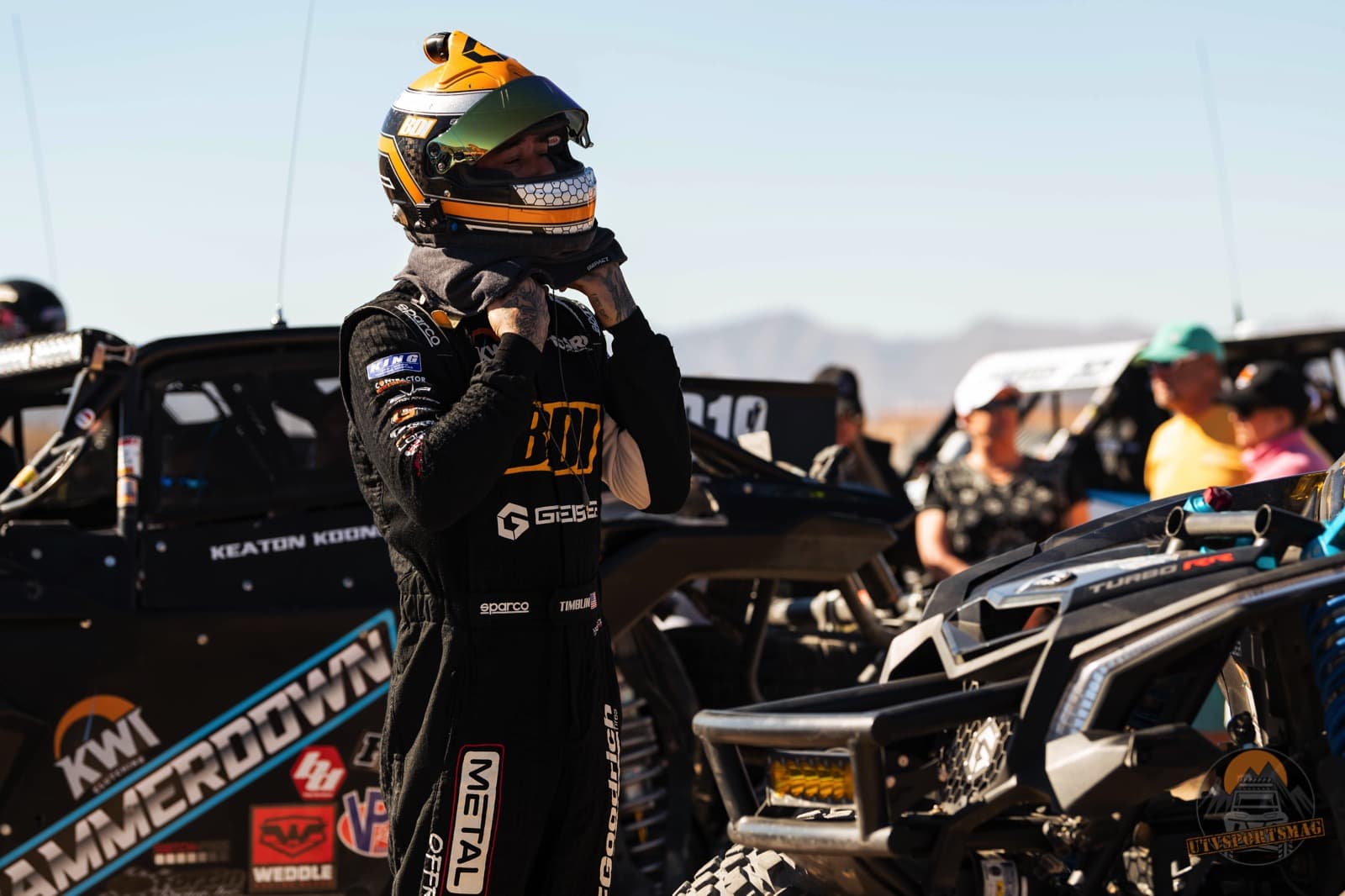 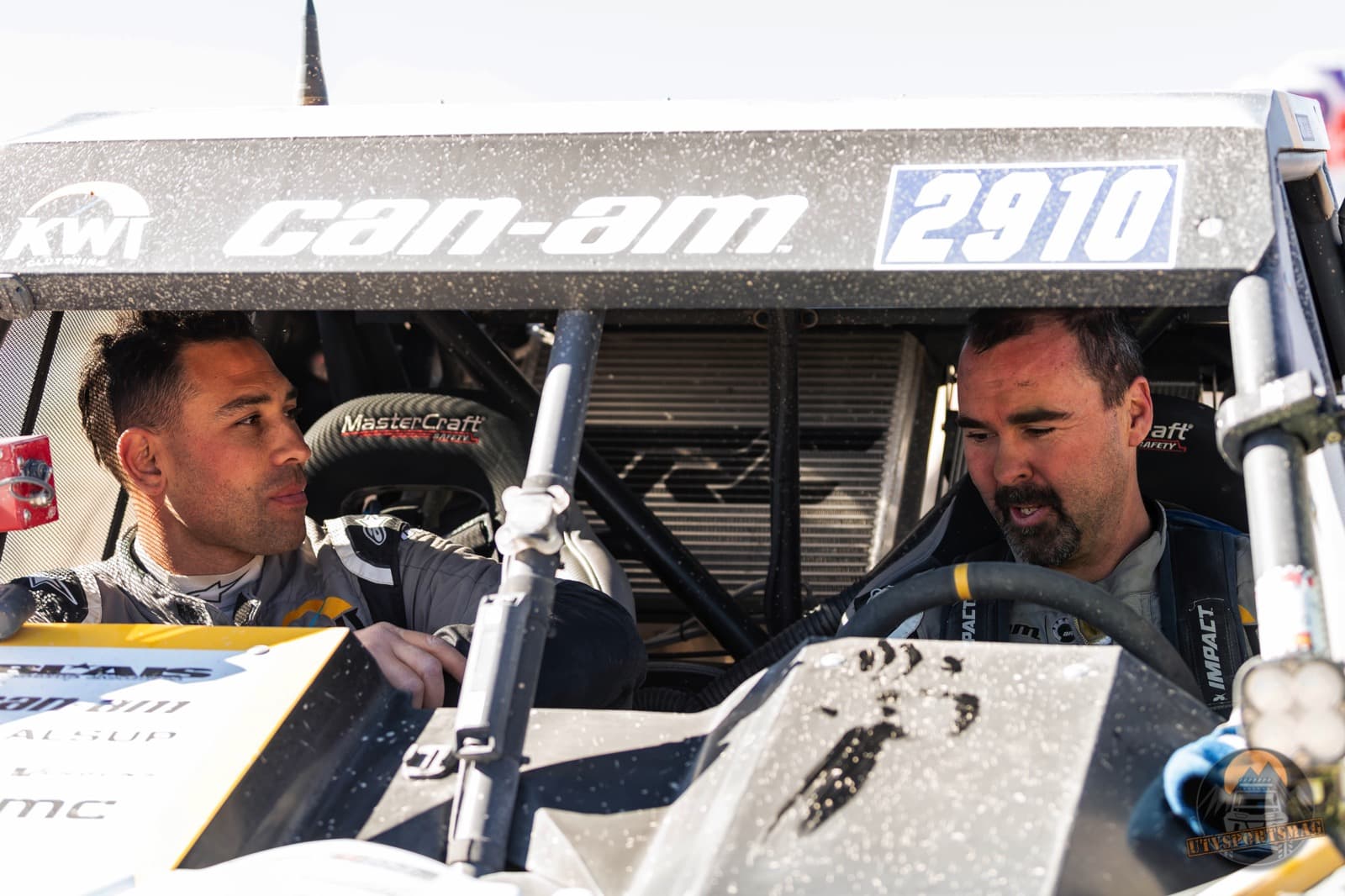 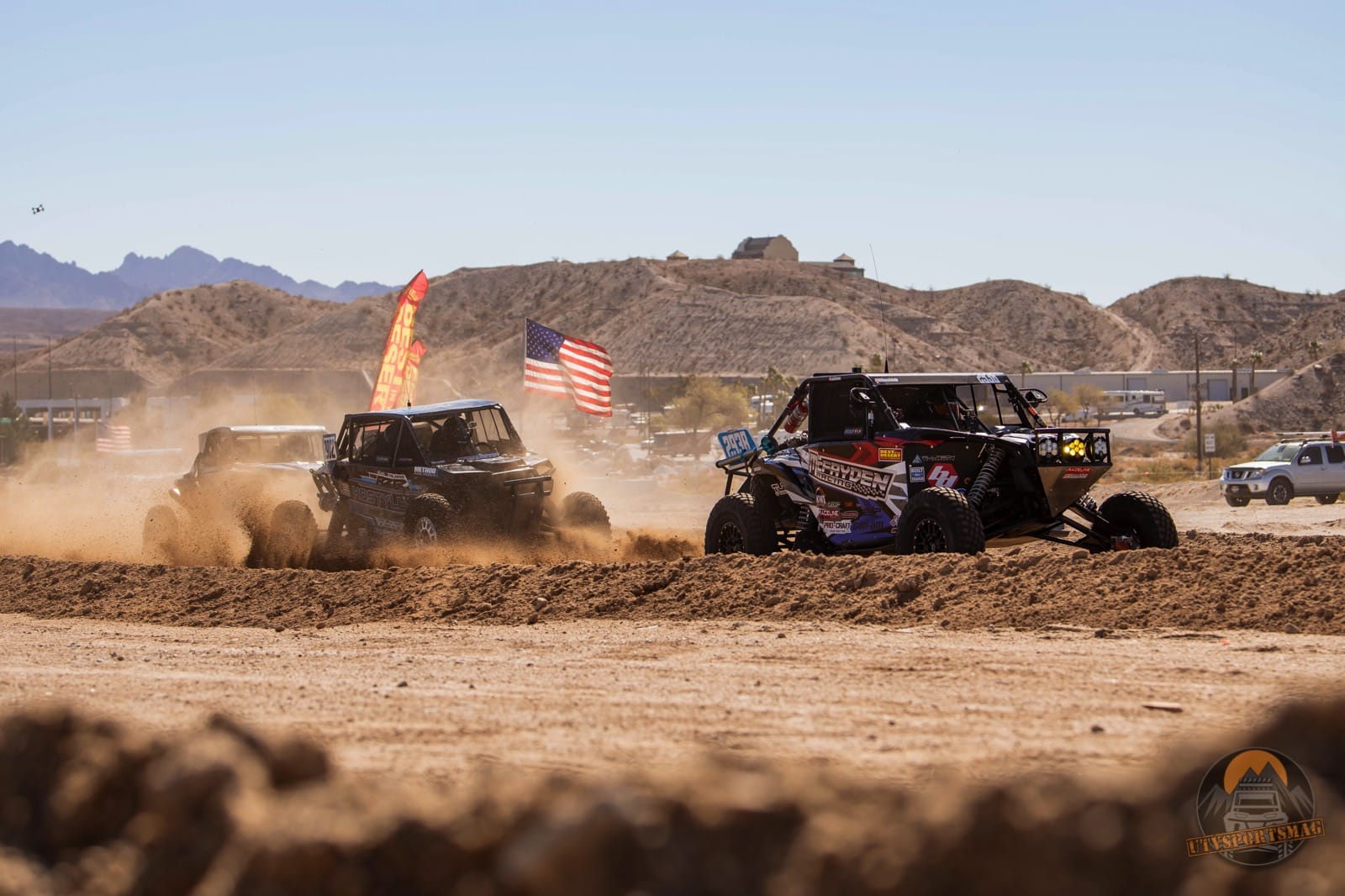 Another benefit of the infield section is the ability to use it for the youth races. These racers range from only five years old up to 17. Some of them have a decade of race experience by the time they are old enough to drive on the streets. Many of today’s top pros started their career by racing in the youth UTV categories. This gave them a chance to race on some of the same tracks used for the pros, and in front of the same fans.

After going through contingency on Friday morning, the youngsters raced that afternoon. There are several 170 cc classes separated by age, along with 250 classes, 570 classes, and even the 1000/RS1 class that had 18 entries. Who wouldn’t want to be a kid with an RS1 race car? It pays to remember the names of the winners, because you might be hearing them for an awfully long time. Tanner Thompson, Cash Martinez, Nixon Nagel, Jacob Williamson, Mason Cotter, Paxton Schendel, Evan Atkins and Paxton Schendel all reached the top of the podium in their respective classes. Many other talented drivers landed on the podium, or finished towards the top of the field; they are all part of the future of the sport. 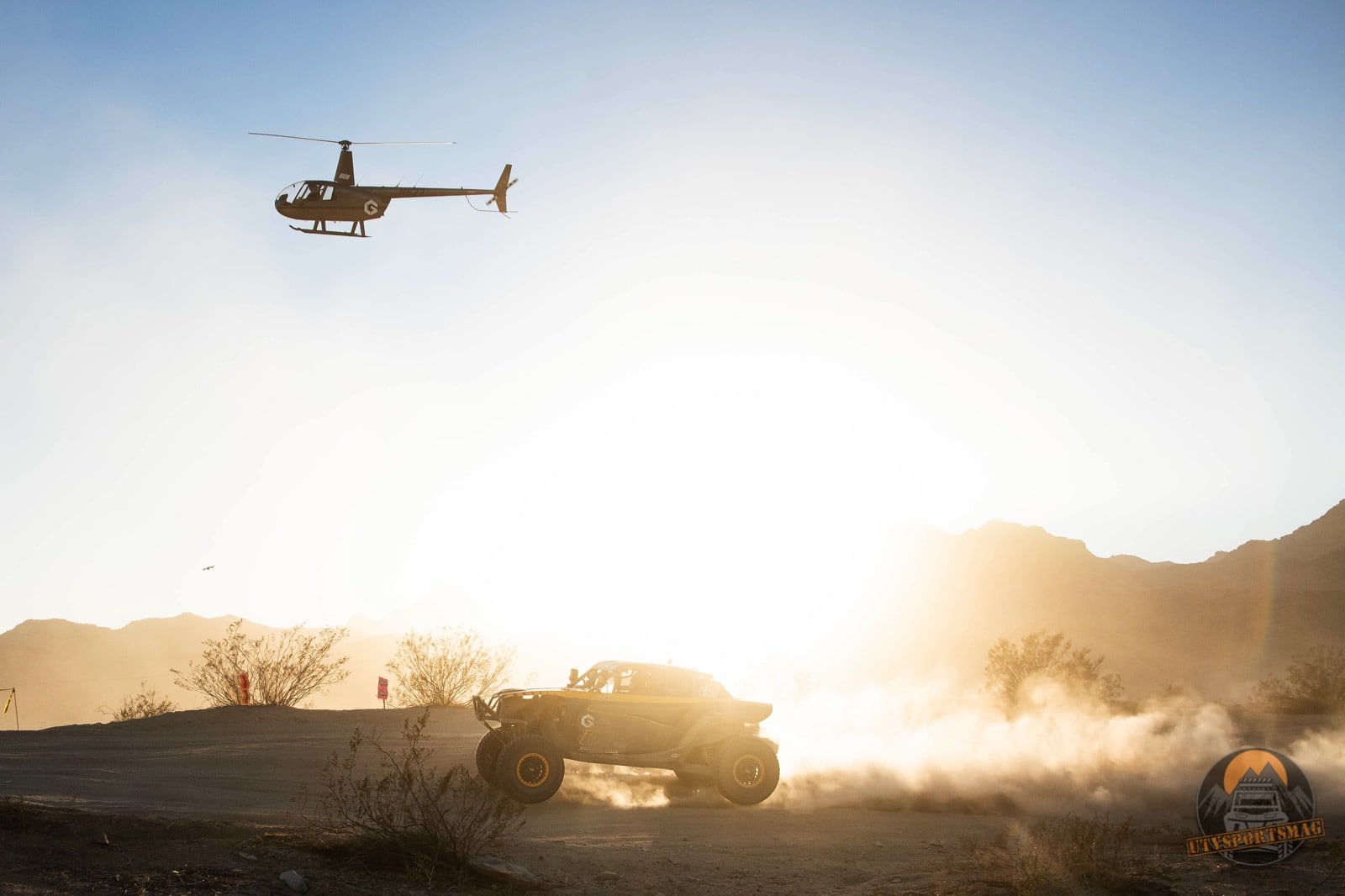 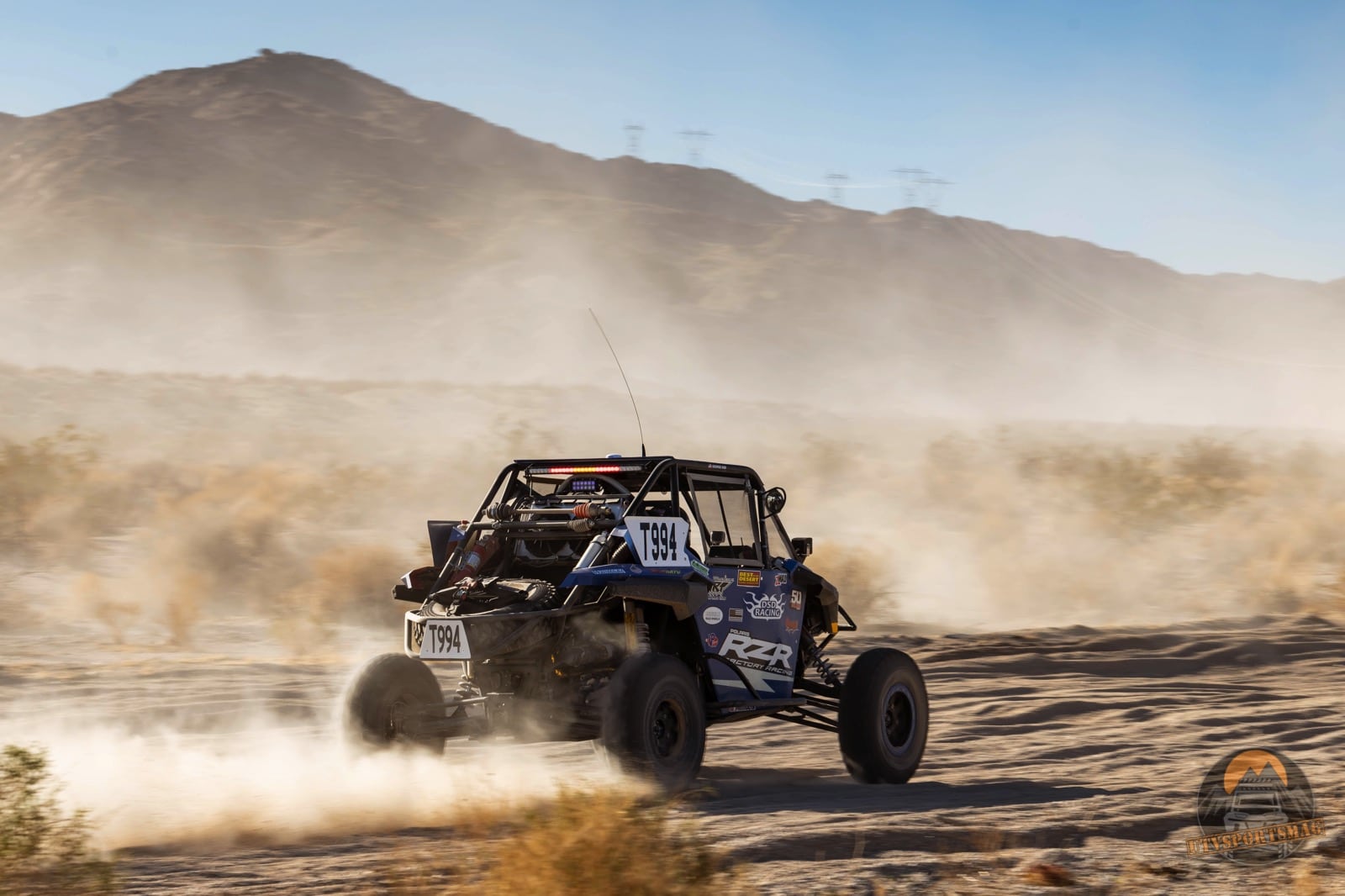 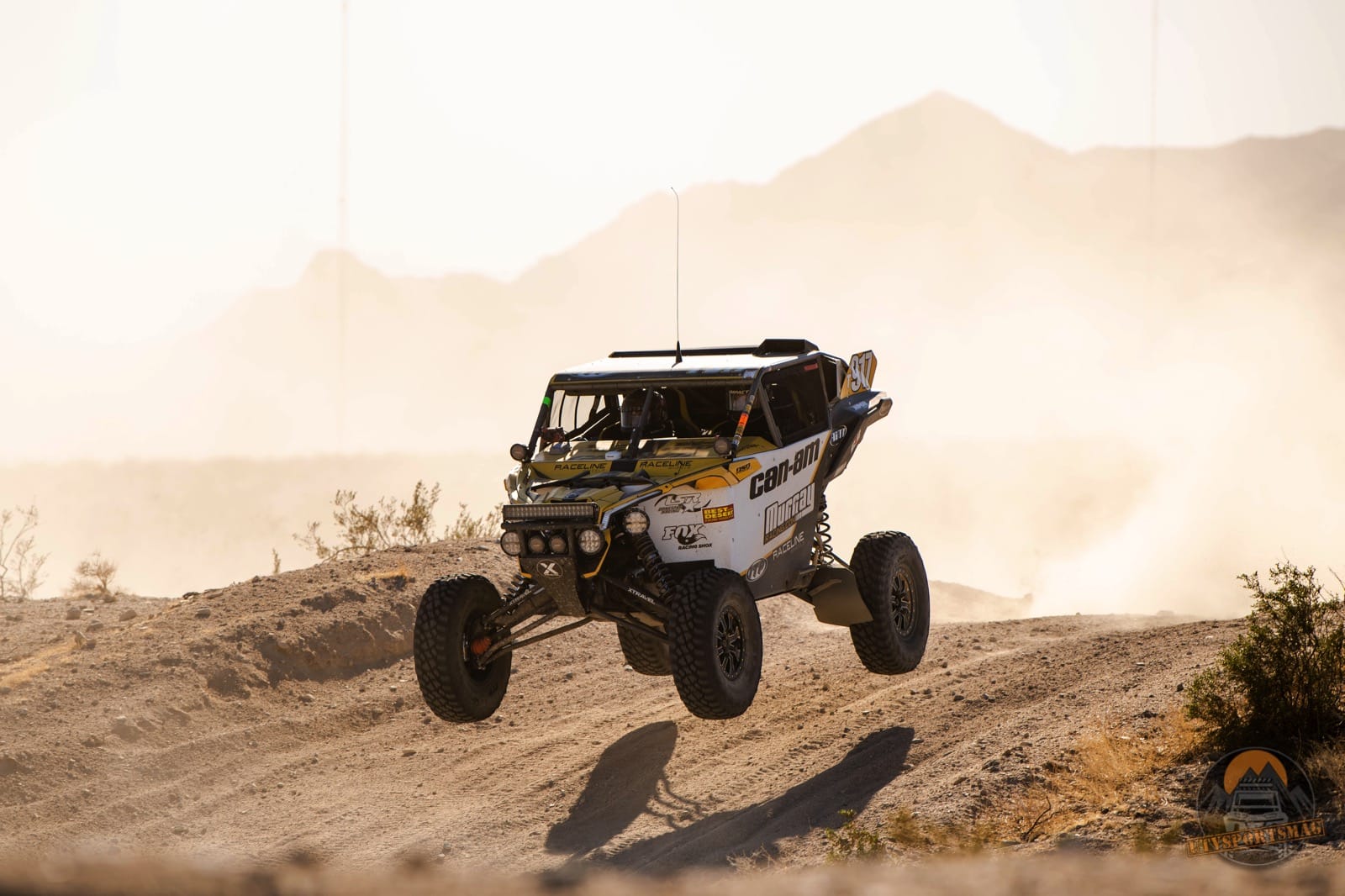 Saturday’s main event had two UTV races. After the bikes, three wheelers, and quads ran first thing in the morning. UTV Sportsman, Super Stock, and Trophy Unlimited class UTV’s lined up at 10:00 a.m. for 10 laps of triumph or torture depending how your race went. Luckily, there was a stiff breeze to blow the dust off the course, but it was blowing north to south. That meant the proving grounds, where the huge bumps were, would have dust blowing directly down the course. The racers would have to negotiate the whoops in blinding dust. Parker 250 winner Mike DeLey grabbed the holeshot, but dropped back after he had to head to the pit. Dan Fisher from Lonestar Racing fought to the front, followed by Chris Blais, Mitchell Alsup, Garrick Lastra, Brayden Baker, and MMA fighter Donald “Cowboy” Cerrone all dicing for position. Fisher would be the rabbit for most of the race. He built up a pretty substantial gap to second place, having clean air up front. On Lap 8, Blais took the lead followed by Nick Turner in second, and Brayden Baker holding down third. They started in groups of four off the line; with corrected time, it was anybody’s guess who was actually leading. Unofficial results have Chris Blais with the win, Brayden Baker 2nd, and Jamie Campbell third. Campbell’s Honda team had short course ringer Elliot Watson and desert racer Trey Hernquist listed as drivers. Watson was

Mitchell Alsup took the win in the UTV Super Stock class; his time of 03:25:37.494 beat Jamie Campbell’s, so he was third overall. His company, Alsup Racing Development, built his car, and that of winner Chris Blais. Chase Carr was second, and Conner Maxwell took third. In the UTV Sportsman Class, the finishing order was Eric Murphy with the win, Jason George second, and David Holley third. Out of the 49 UTV’s in the race, only nine finished all 10 laps. Once the leader crosses the finish line, nobody can go out for another lap. Some were running at the finish, but only completed as few as six laps. There were 11 DNF’s (did not finish).

After the first race, the UTV Pro NA and Pro Turbo cars would have a crack at the track. Gone was the breeze that blew the dust away earlier; it was going to be a dusty one. Surrounded by tall mountains, the course sits down near the river; the lowest point around. The dust hangs close to the ground when it’s calm. The drivers also contended with the setting sun, and the onset of darkness, all while negotiating the deep ruts and loose rocks kicked up by the previous races. 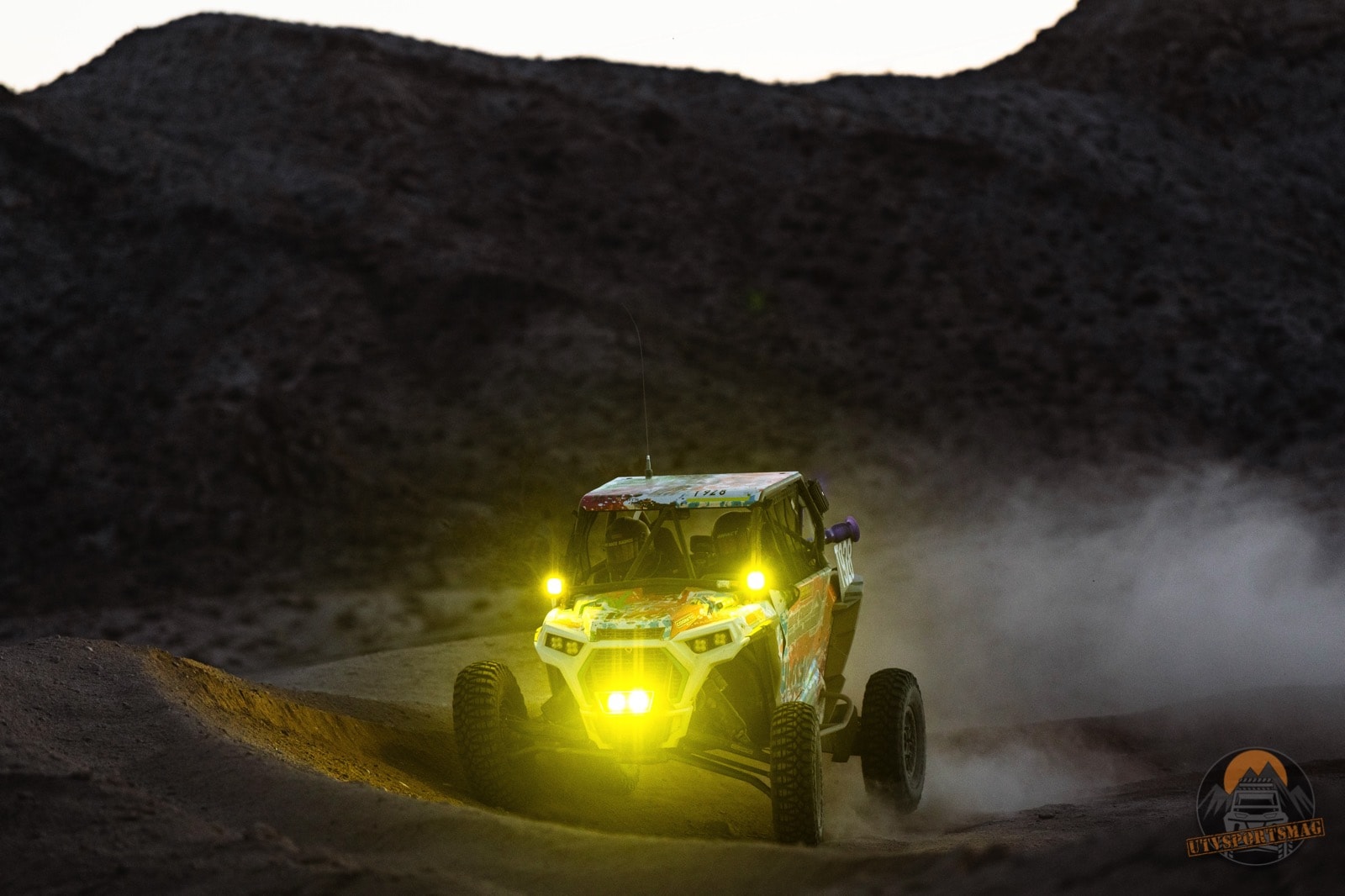 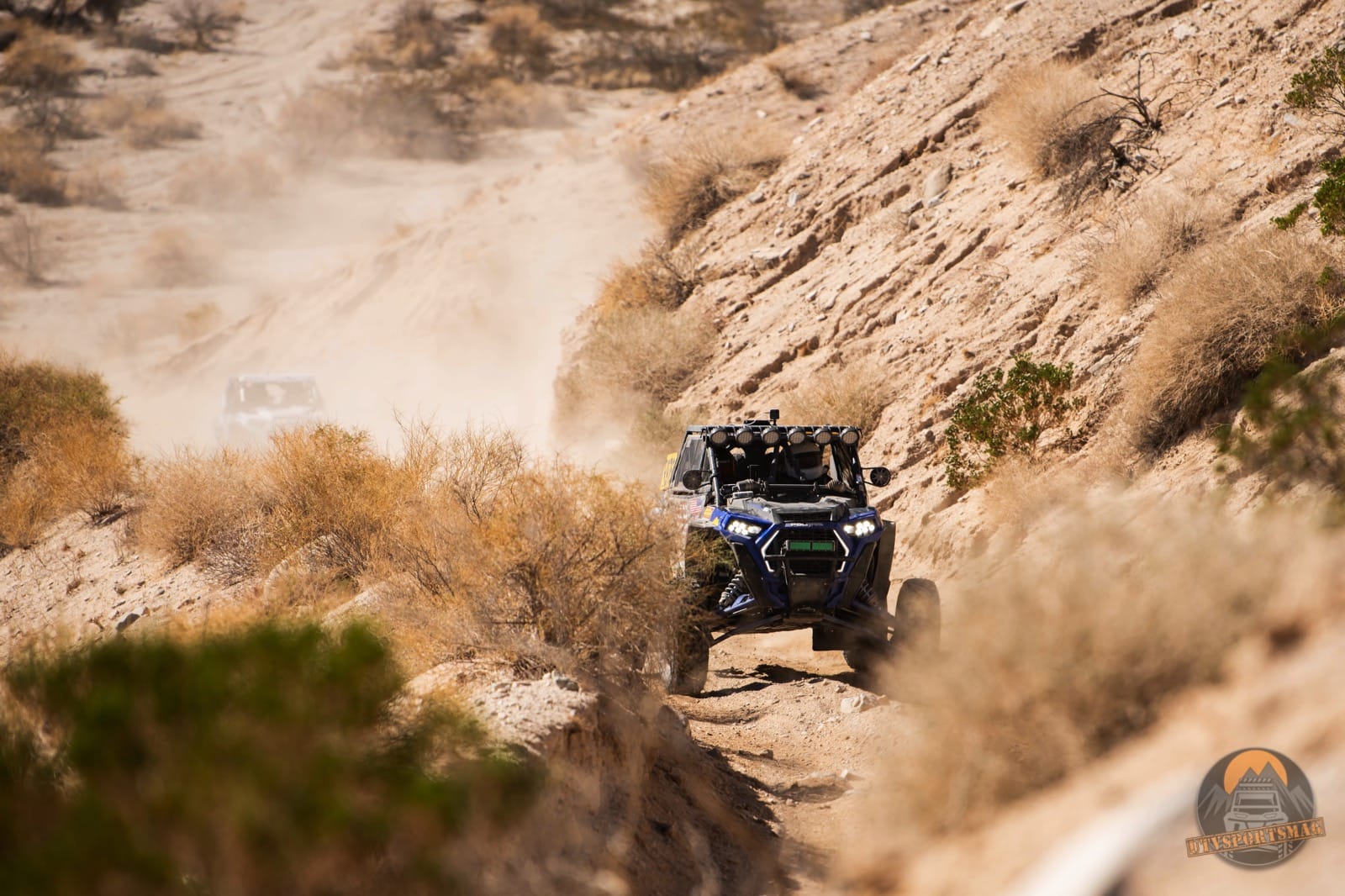 Bruce Binnquist had a problem early on, but was absolutely flying the rest of the race. He was clearly the fastest going through the huge whoops in the proving grounds. While most pounded through the valleys, his speed allowed him to skim across the tops.

Once Phil Blurton gets out front, it’s very difficult to chase him down. He builds bullet proof cars, and never makes a mistake. That script didn’t matter to Joe Terrana, though. He was pushing hard, and putting immense pressure on Blurton. When Blurton got held up behind lapped traffic on the final lap, Terrana pounced, and took the lead. According to Beau Judge, Blurton’s co-driver, they made the decision to let him go.

Judge is an accomplished driver himself, and if those two decided the pace was too high, nobody could argue. As they accepted their fate and were content on grabbing second-place points towards the season-long points championship, they passed Terrana who was pulled off the course. They then went into math mode trying to figure out how much time they would need on him to take the win. They poured it on to the finish and took their second straight win. Terrana made quick repairs and finished second. Chase De Sousa Dias was third. The top six Turbo cars all did 10 laps. The N/A Pro cars only managed to complete nine. Top three in that class were Josh Row, Max Eddy, and Cash Shaleen.

It was obvious that the additional two laps had a big impact on the race. Serious lead changes, and strategy came into play. It was still an all-out sprint race, but a lot happened in the final 34 miles. Best In The Desert raised the bar, and the racers responded. 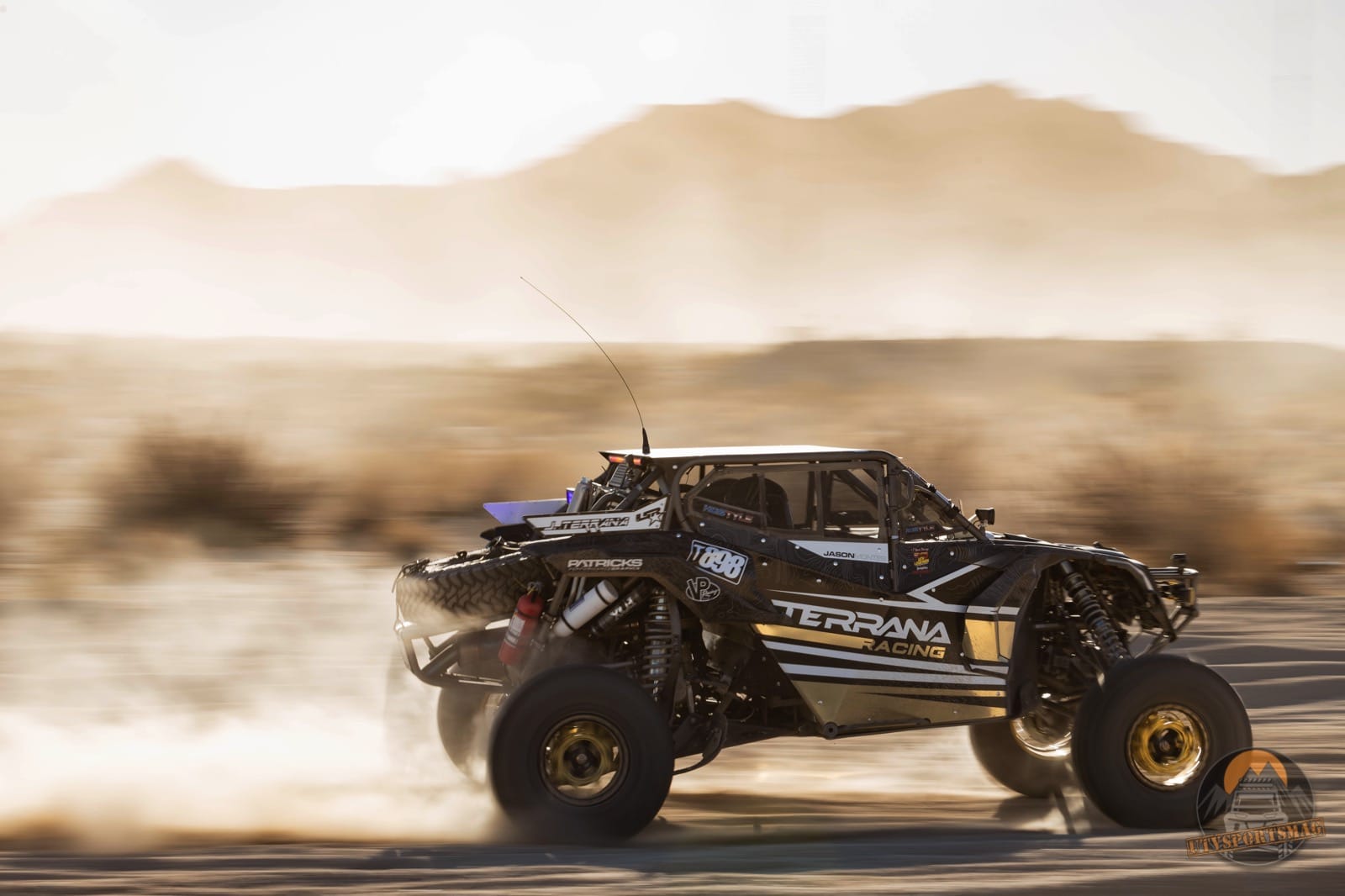 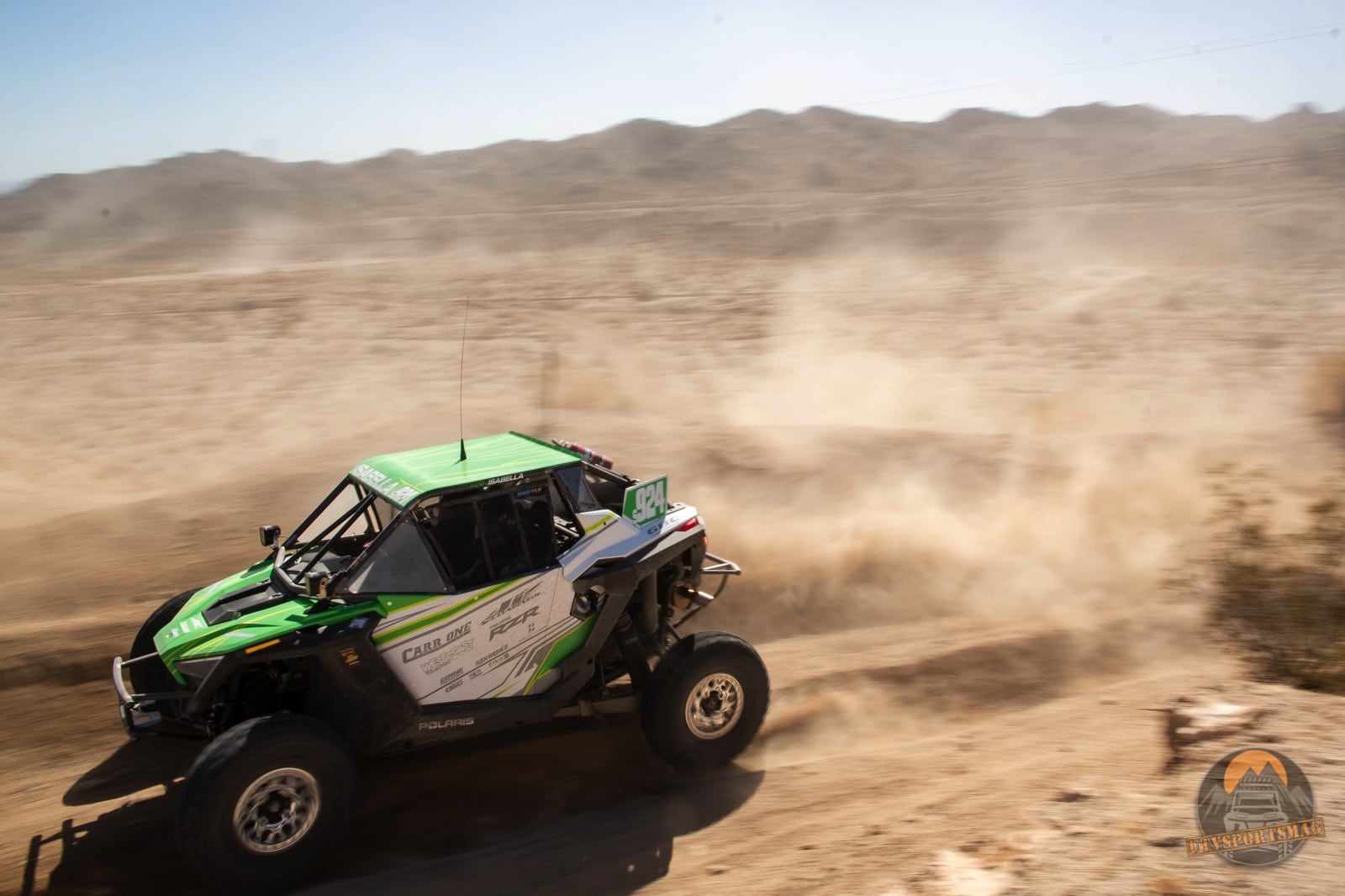