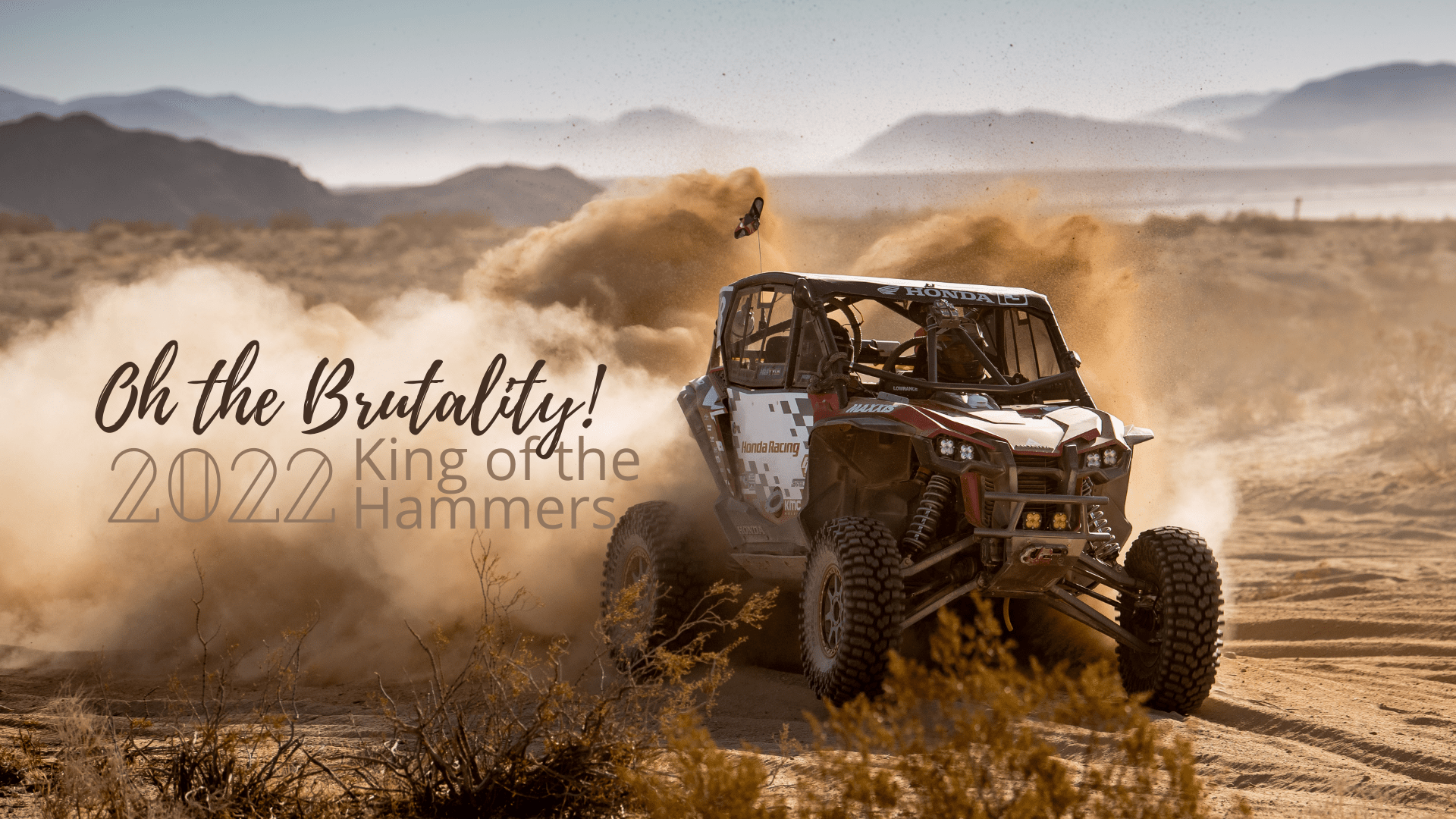 A Race That Hurts So Good

2022 King of the Hammers Leaves a Mark

When King of the Hammers was conceived back in 2007, UTVs were not even on the organizers’ radar. It was a single-purpose rock crawler race based on a what-if. What if we held a race that was half in the desert and half through the Hammers trails in Johnson Valley, California?

Fast forward to today, and UTVs are everywhere. The fans use them, the media uses them, race officials use them, and the racers compete in them. They were added to the event way back in the event’s early years, in 2009. Mitch Guthrie Sr. was Mr. KOH back then, winning the first two years back-to-back. Brandon Schueler knocked him off his perch in 2011, but Mitch came back to dominate the top spot from 2012 to 2015. In 2018 and 2019, Mitch Jr. took the title back to back; he had a good teacher. 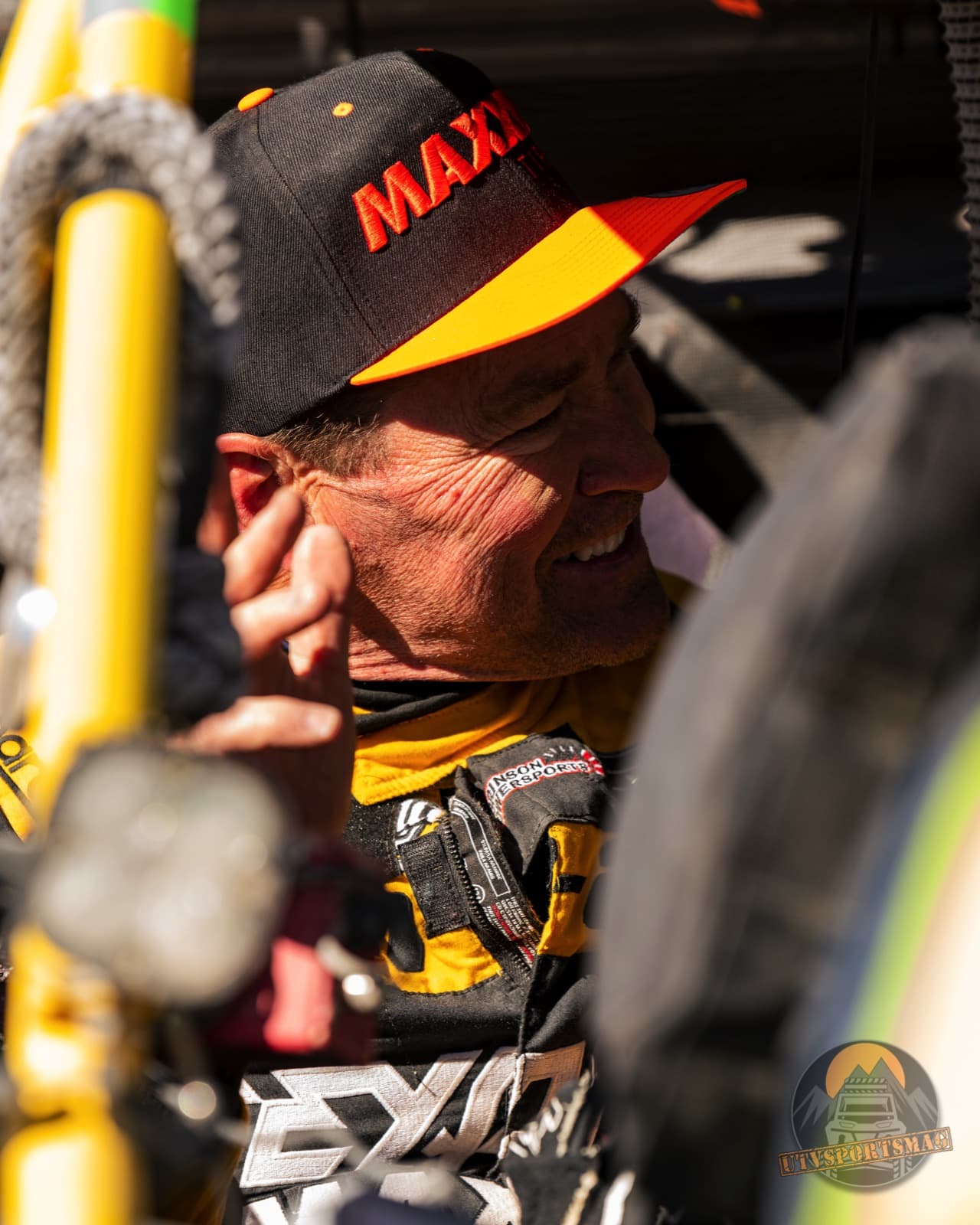 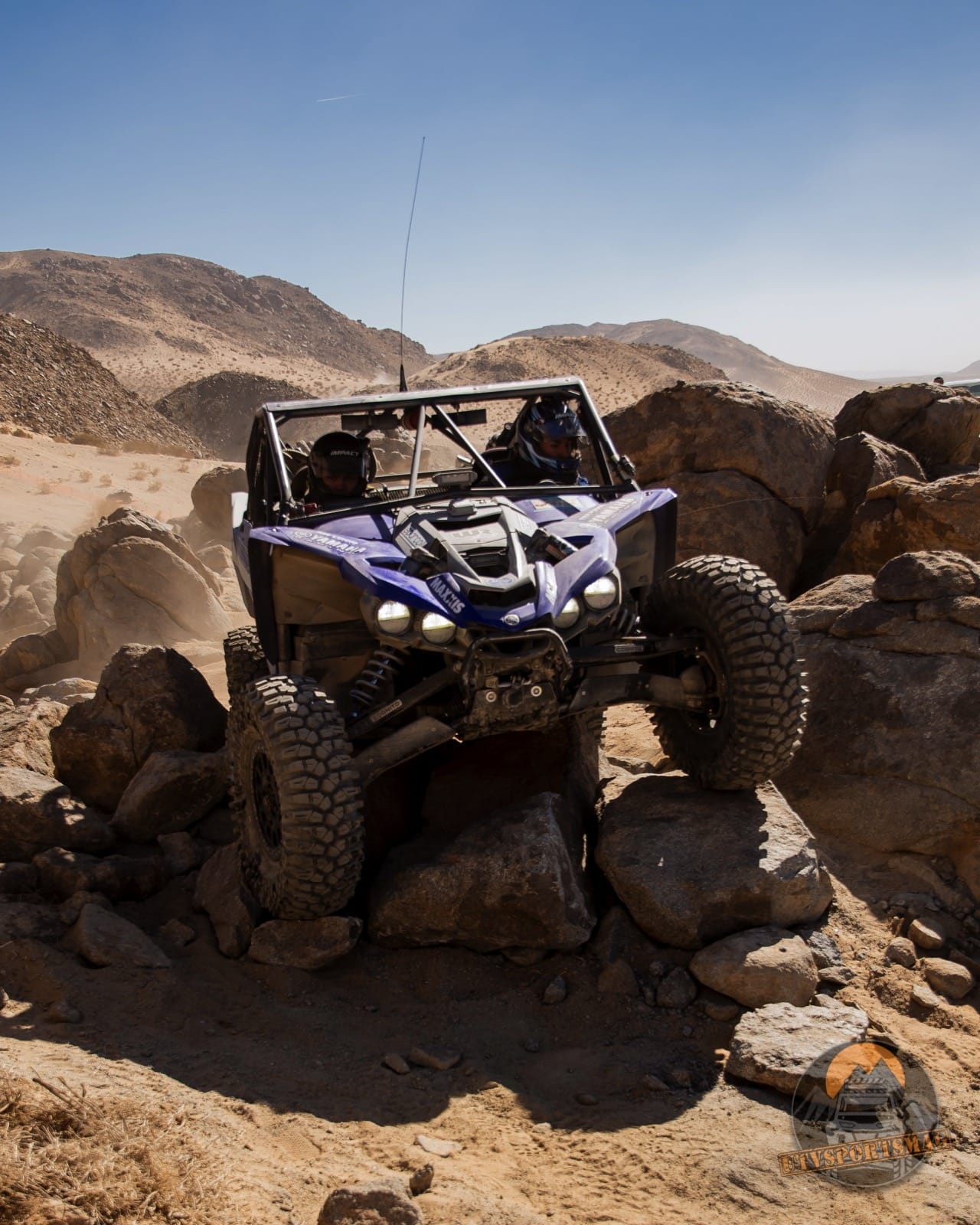 I had serious doubts UTV’s would be able to negotiate the terrain in Johnson Valley, but they did. Their design is perfect for rock crawling; light weight, good suspension travel, all-wheel drive, a great power-to-weight ratio, and most importantly, they are completely flat on the bottom. They are perfect for sliding over rocks. Today they race in the Toyo Tires Desert Challenge, the Can Am UTV Hammers Championship race, and several even run the Nitto Race of Kings main event with the unlimited Ultra4 cars who run huge horsepower and giant tires. 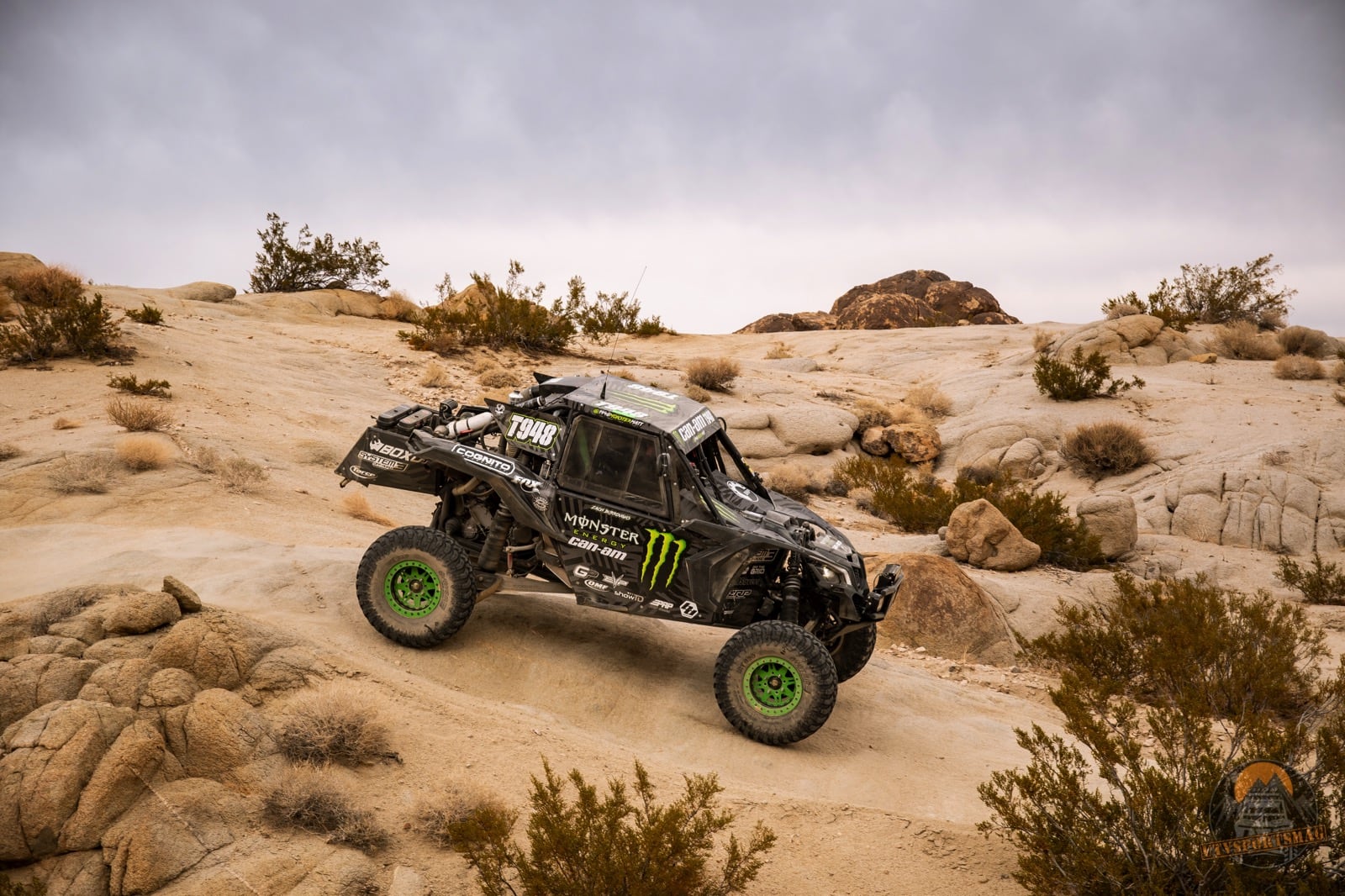 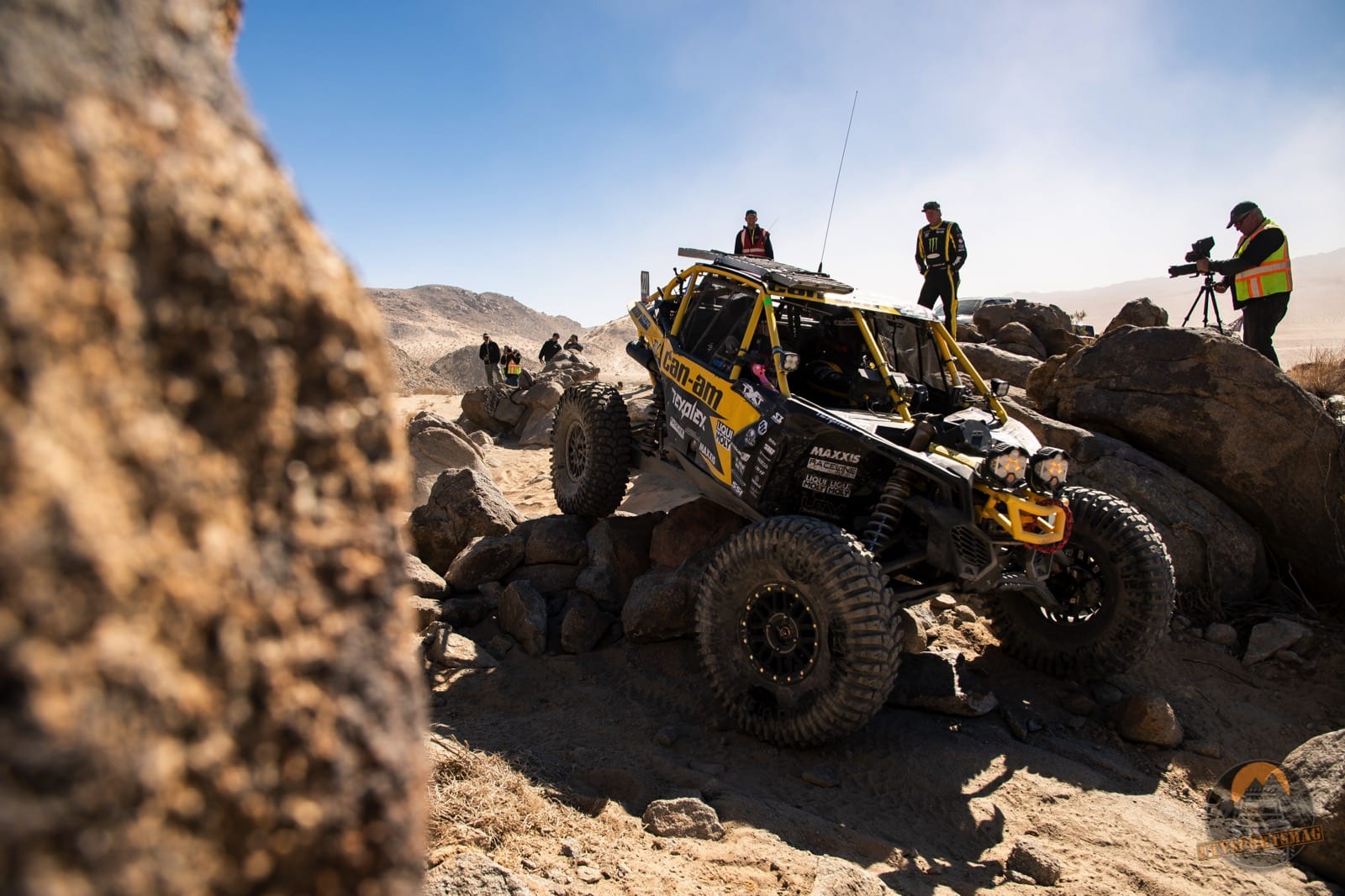 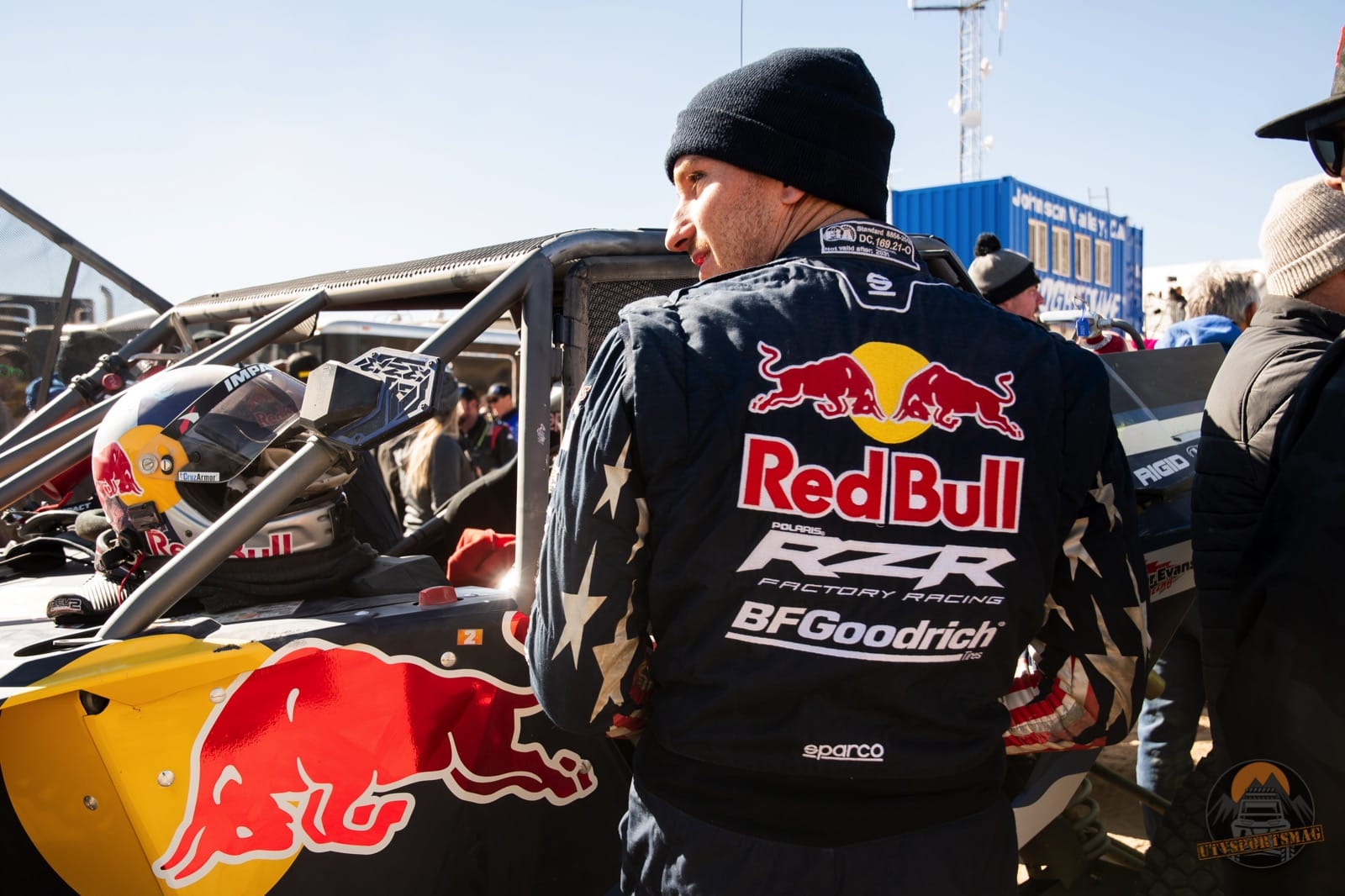 KOH 2022 got underway with the Toyo Tires Desert Challenge. The field was made up of Class 5’s, TrophyLite, UTV’s, and Desert Class 10 cars. The Class 10’s have unlimited suspension travel, but limited motors. They have independent suspensions front and rear like the UTVs but are larger. They are made to cover lots of terrain in a hurry, running wide open, and are the main competition for the UTV’s. While the UTV’s are much more nimble in the technical stuff, the 10 cars are better suited to the open desert. After qualifying, the 10 cars took all the top spots except for Mitch Guthrie Jr., who was third fastest in his Polaris RZR Pro R. Austin Weiland, Vito Ranuio, and Wayne Matlock were 12th through 14th. On race day, the results were similar. Mitch Guthrie gained a spot to finish second overall, and the next UTVs to finish were Wayne Matlock in 9th, and Austin Weiland in 10th.

The Can-Am UTV Hammers Championship race was specifically for the UTVs, since they could compete on a level playing field with each other. Unlike the desert course, this route would take them into the big rocks where some of the boulders are bigger than the cars. 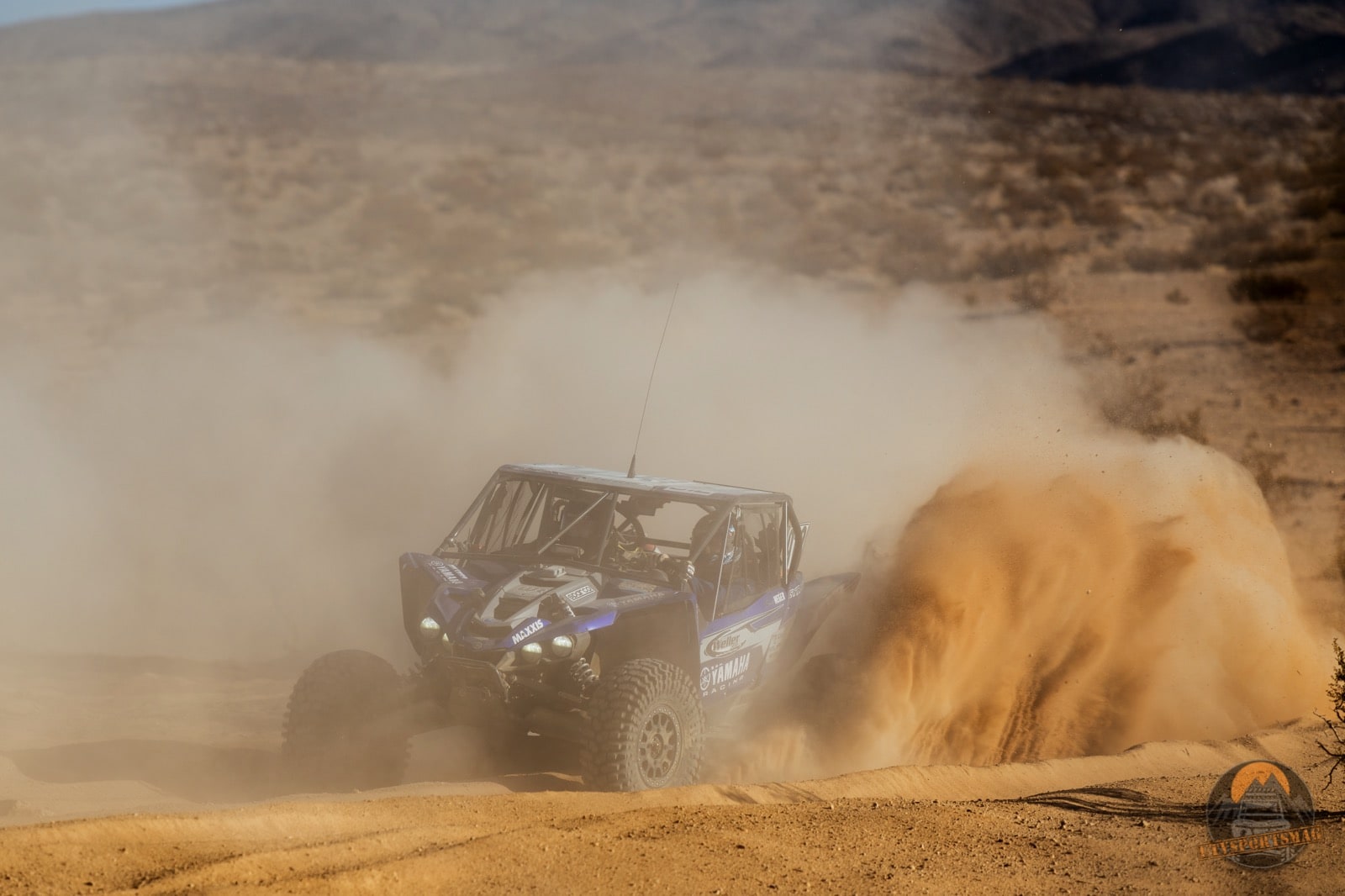 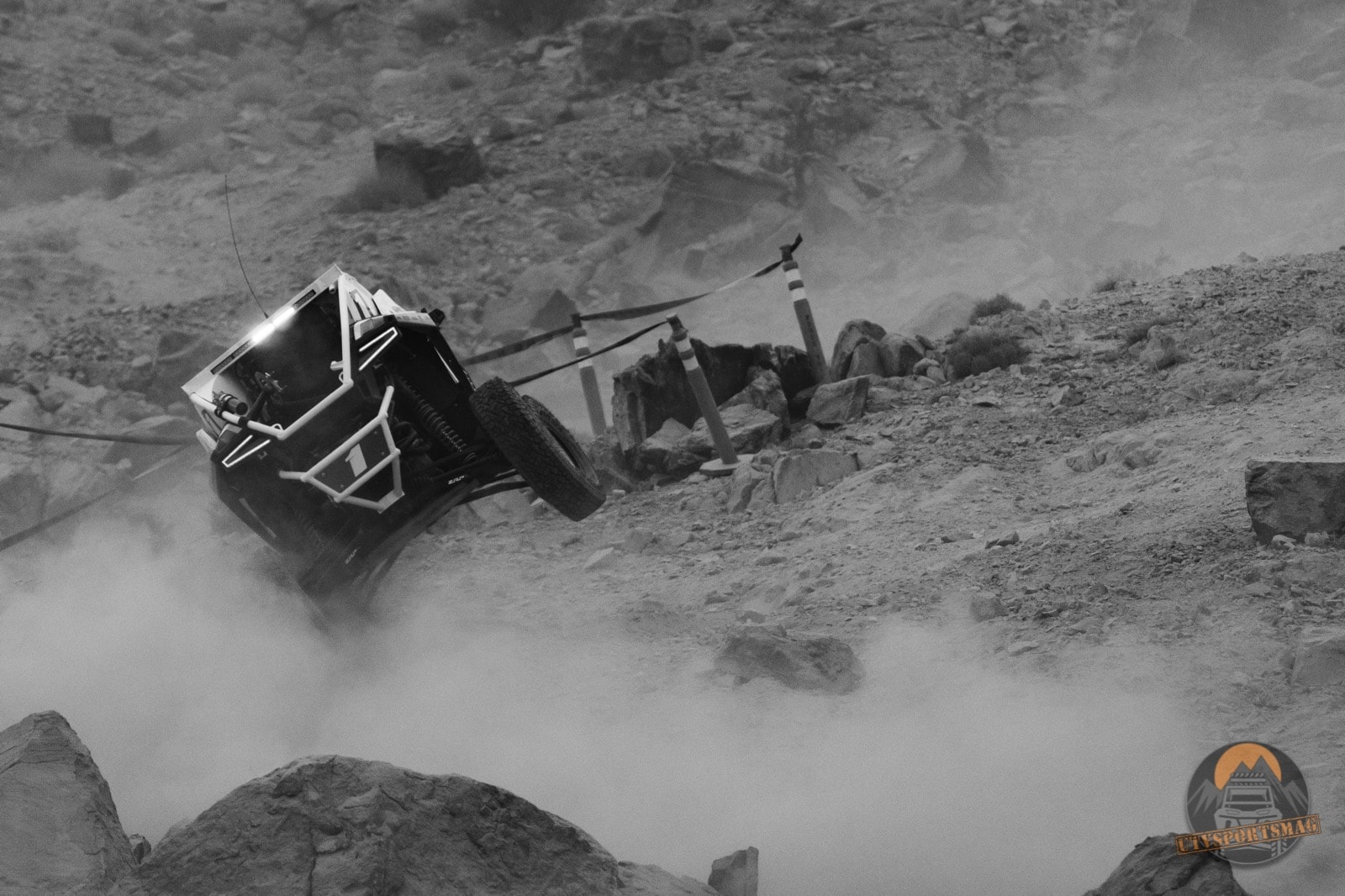 The field was stacked with amazing talent. Many know Phil Blurton from his desert racing success; he’s won multiple championships in the desert, and is the current SCORE International UTV champion. He’s also an experienced rock racer, having competed in the big cars before racing UTVs. Defending Hammers champion Kyle Chaney was back. He not only won the UTV race in 2021, but also finished 11th in the Ultra4 race; he does very well in the rocks. Multi-time winner Mitch Guthrie is always a solid contender in his Red Bull Polaris. The Miller Brothers, Cody, and Hunter, are in contention wherever they race; Hunter won in 2020. Both Johnny Greaves and Son CJ made the trip to Hammertown. Both are short course racing champions. Bryce Menzies was looking for retribution after breaking his T1 truck and dropping out of the Desert race. S3 Powersports’ Dustin Jones threw his hat into the mix. Successful in the desert, he’s still searching for a win in the rocks. We also had two motorcycle icons in the field, Jeremy McGrath, and Brian Deegan. Phil Blurton set a quick time in qualifying, but Cole Clark got him by tenths of a second for the top spot. Cody Miller was third, and Brother Hunter fourth fastest. Ronny Anderson was fifth, and my underdog pick to win Brock Heger sixth. The rest of the top ten were Chaney, Guthrie, Jamie McCoy, and RJ Anderson.

The course was already torn up from all the days of pre-running and earlier racing. With no wind, the entire valley was filled with hanging dust. They would run one lap in the desert, (with a couple rock trails still), and then hit the rocks. Even the rock trails were dusty because the dirt was really dry.

Clark and Blurton started side-by-side off the line. Clark got out first, but soon Blurton pulled out to pass—Clark said he thought Blurton was going to crash. It was the last thing on his mind as he tumbled through the desert. While being interviewed he made it clear that the pass was clean, and Blurton never touched him; despite Internet claims.

At pit one Blurton pulled in for a long stop. He was having axle problems, and went on to break a knuckle, and lose his brakes, eventually finishing in 10th. Others were also suffering. Ronnie Anderson was running strong until he lost the transmission in Turkey Claw. Brock Heger was running in the top five, but became crossed-up in directions and went down the wrong trail. He still managed to finish 8th. 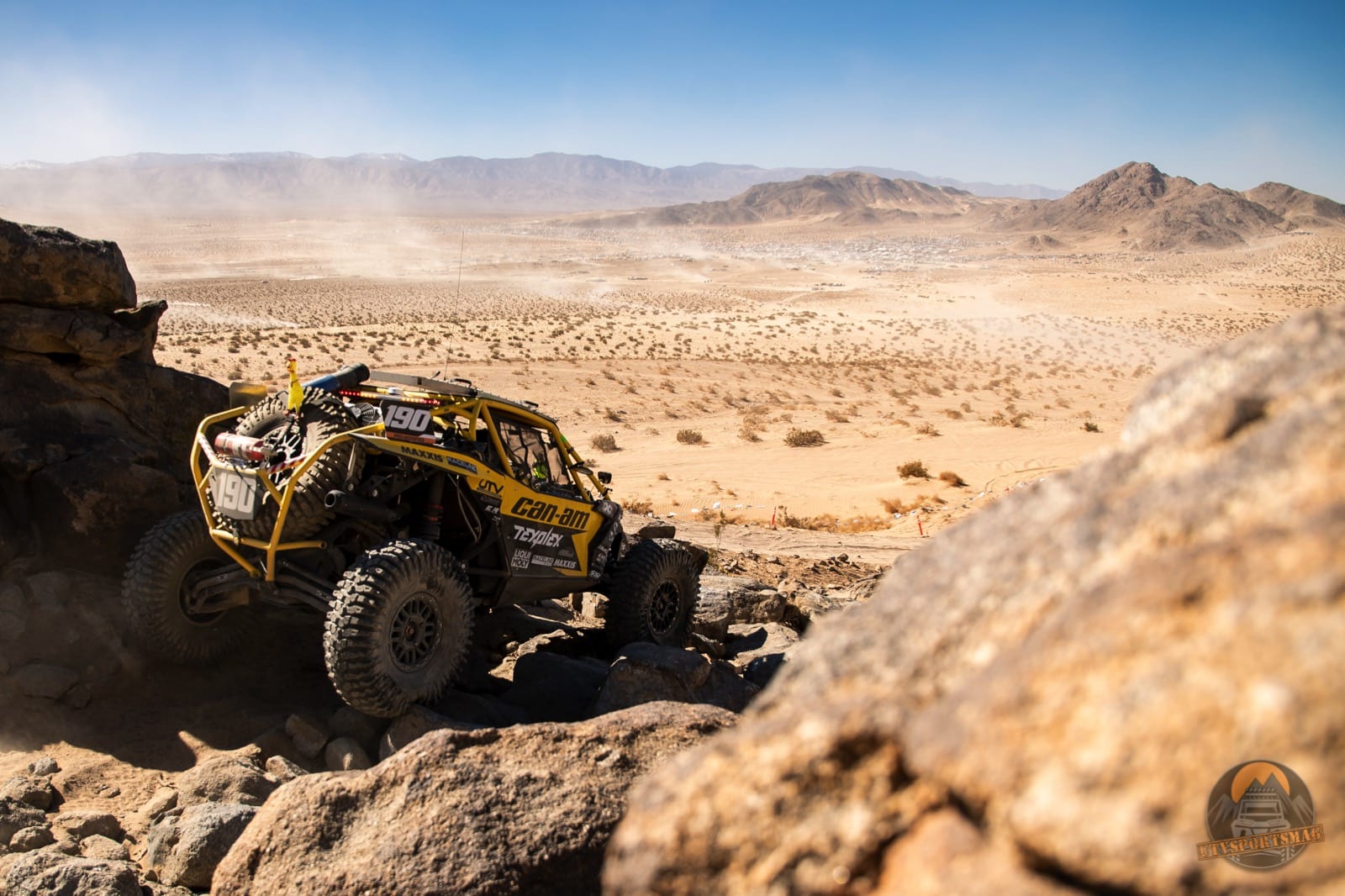 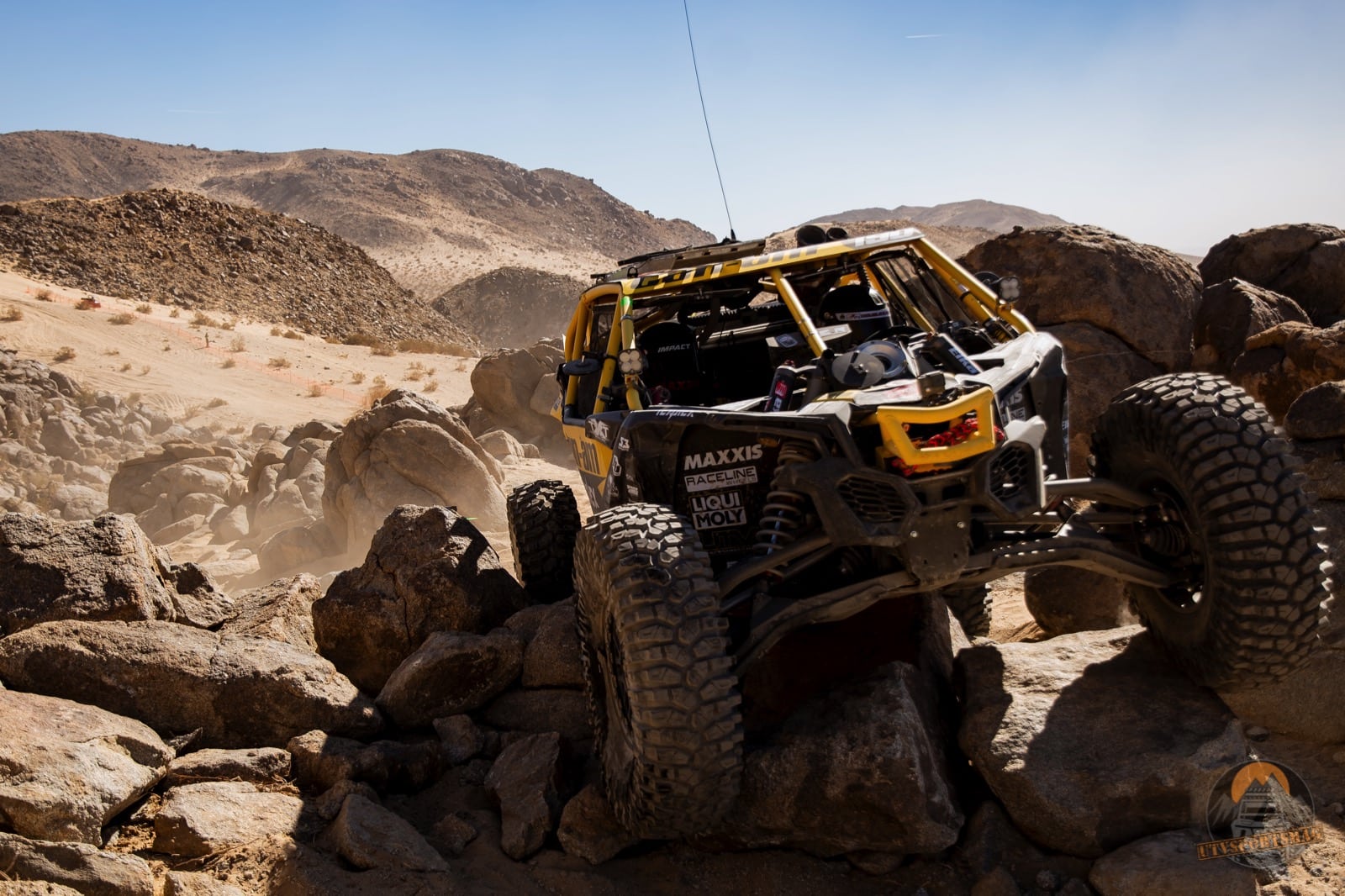 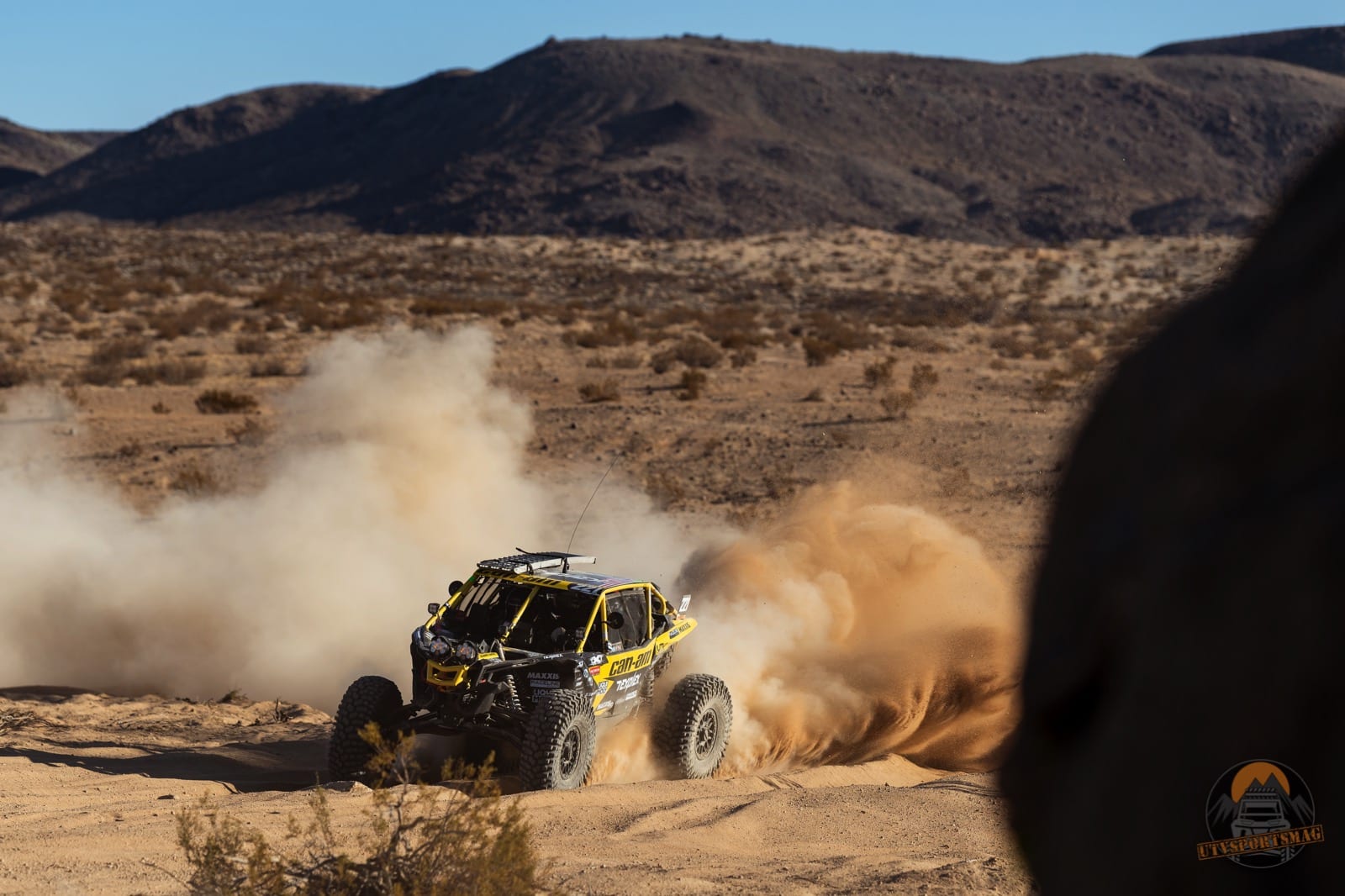 It’s amazing that these UTVs can withstand the punishment inflicted on them during this race, but the drivers and co-drivers get just as much torture. Co-drivers spend a lot of time jumping out, climbing on the rocks, winching, and changing tires. It’s hard, miserable work.. They deserve a lot of credit, as well as everyone else who turns a wrench, dumps fuel, or handles the logistics. Competing at King of the Hammers is a monumental task, and many teams give their maximum effort to win, but there is only one who gets the crown. This year it was Kyle Chaney’s Can-Am crew who had the cleanest, and fastest run. They would join a select crew of competitors with back-to-back wins. Second place was Hunter Miller, and Paul Wolfe charged through the field from the 11th qualifying spot to round out the podium in third overall.

After the grueling race, the Can-Am UTV Grudge Match took place with a purse worth $10,000 dollars. This competition consisted of four laps on the qualifying course, with the top 20 finishers of the Can-Am UTV race invited. Branden Sims was qualified but did not want to tear up his car since he does his own prep, and has two races in two weeks coming up. He also took note of all the short course ringers who were competing. He was prescient, as Brian Deegan took the win. Even after all that punishment, several of the UTV racers qualified, and took part in the Ultra4 race. Kyle Chaney, and Cody Miller were running in the lead pack on lap two of three, but none of them survived three laps. Johnson Valley is 96,000 acres of brutal desert. It contains so much terrain that new trails are constantly being discovered. Nobody knows where the courses will go next year, not even Ultra4 owner Dave Cole. One thing is for certain, King of the Hammers will continue to be the toughest test for competitors in the desert, and on the rocks for years to come. There’s no doubt the crowds will continue to increase. This year’s attendance was estimated at over 100k. The increased gate money went into the purse, giving competitors an additional $100,000 over the already-generous prize money. King of the Hammers has come a long way, but it still looks to have a long and very promising road ahead. 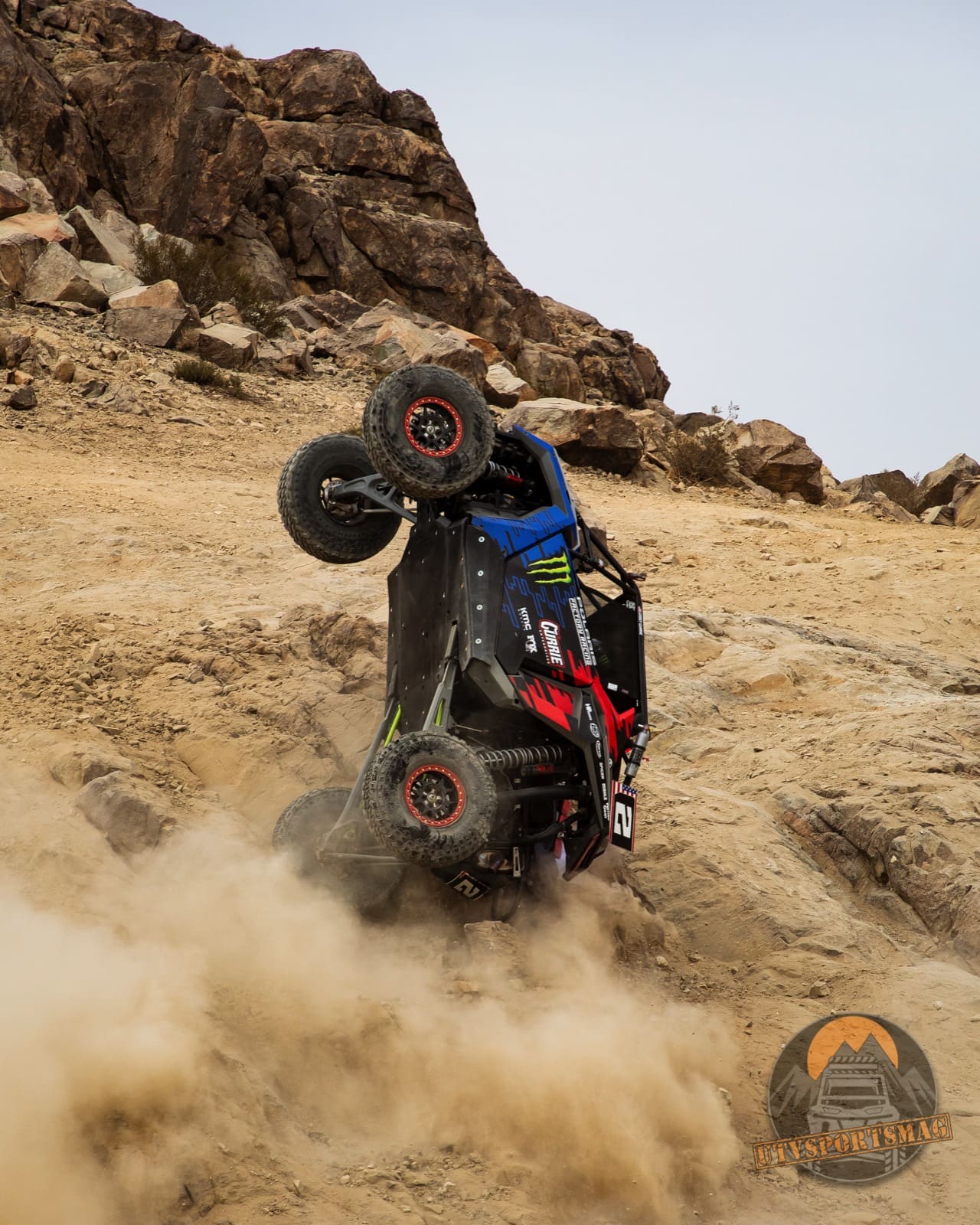