From an aerial view it’s easy to see the ‘clean’ line where all the traction resides, and you can also see the staggering amount of cracks in the ice!

What a crazy world we live in, where us humans strap ourselves into gasoline fueled contraptions to hurl ourselves round and round with no destination, and often no physical reward in sight. We engage in these activities purely for the love of adventure, and the thrill of competition—a true test of man and machine to find out who can best adapt to the challenges at hand through strategy and perseverance. 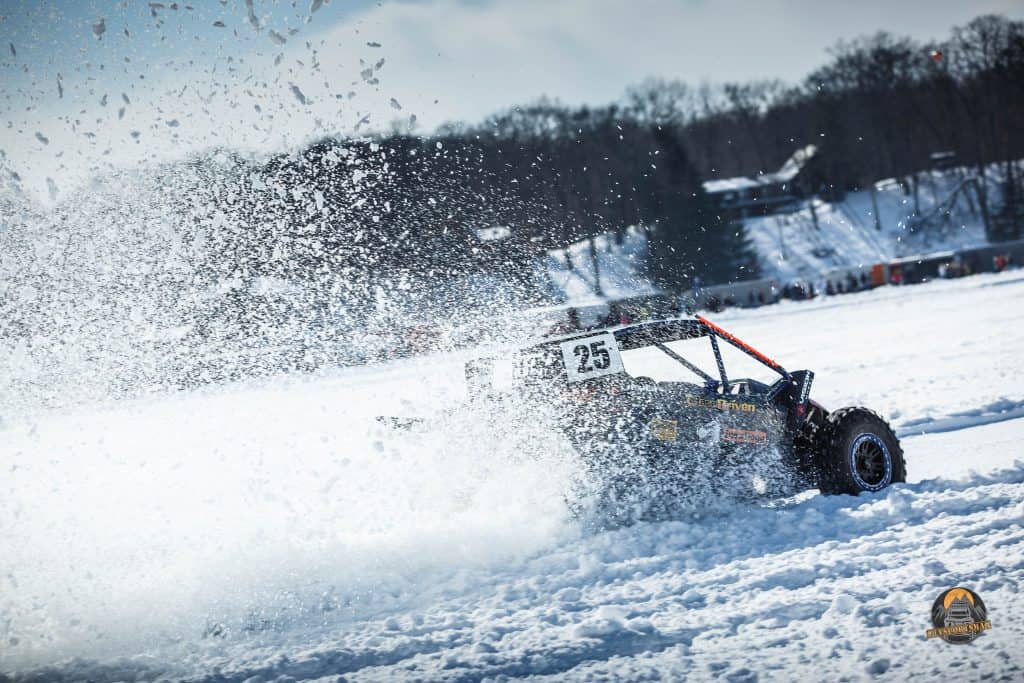 Perennial favorite Ryan Mulder was putting in blistering laps on Saturday as he battled with Gilliland and Minerick for the lead, but was forced to retire when the transmission let go in his YXZ.

The Iceman 500 is a perfect example of this, with racers arriving from all over the country to try their hand at completing five hundred miles on a frozen lake, behind the wheel of machines designed to rip through wooded trails and blast across brutal rock-strewn deserts. From the outside looking in, this race should be easy; there are no whoops, rocks, tree roots, or other obstacles besides several turns on the hard flat ice. But looks can be deceiving. The ice puts drivers in fierce contention with one another causing them to raise the pace and push their machines and themselves to either the point of failure, or victory.

In stark contrast to previous years, 2020 brought blue skies and warm weather to Balsam Lake, Wisconsin. When I say warm, I mean 30-40 degrees Fahrenheit with little to no wind, which is in-fact much warmer than the single-digit temperatures and 20-50 mile per hour winds that have caused much havoc for racers, and race organizers in the past. The below-freezing temperatures that led into Friday’s qualifying session still managed to plague racers with issues though, as the California-based Cook Off-Road Racing crew found themselves with a broken water pump impeller gear after starting their Can-Am X3 without thoroughly defrosting the engine.

After spending most of the day searching for the source of their mysterious overheating issue, the crew then had to miss qualifying completely and drive hundreds of miles around the area acquiring the parts needed to fix their machine. But fix it they did, and the built for Baja X3 was running and ready for the start of Saturday’s race. Not everyone had such a hard start to the weekend however, as Pro Mod racers Michael Gilliland, Ryan Mulder, and Brad Minerick all threw down fast laps in qualifying to land themselves 1st, 2nd, and 3rd starting positions, with 3.5 seconds separating the three of them.

As the green flag dropped on Saturday, drivers took advantage of the great visibility and began to spread out and put the pedal down as they settled into the 29 lap race. By lap 4, Bruce Binnquist set what would eventually be the fastest lap of the race at the helm of Billy Long’s #907 Can-Am X3. While Bruce would take home a $1000 prize for his fast lap, the team who was fresh off racing the Laughlin Desert Classic just two days before, could not continue the pace and ended the day a lap down in 16th place. Returning Iceman champ and second place qualifier Ryan Mulder was also battling up in the top 3 for most of Saturday until he too fell victim to the ice, and fell out of the race on lap 22 with a driveline failure on his Yamaha YXZ. 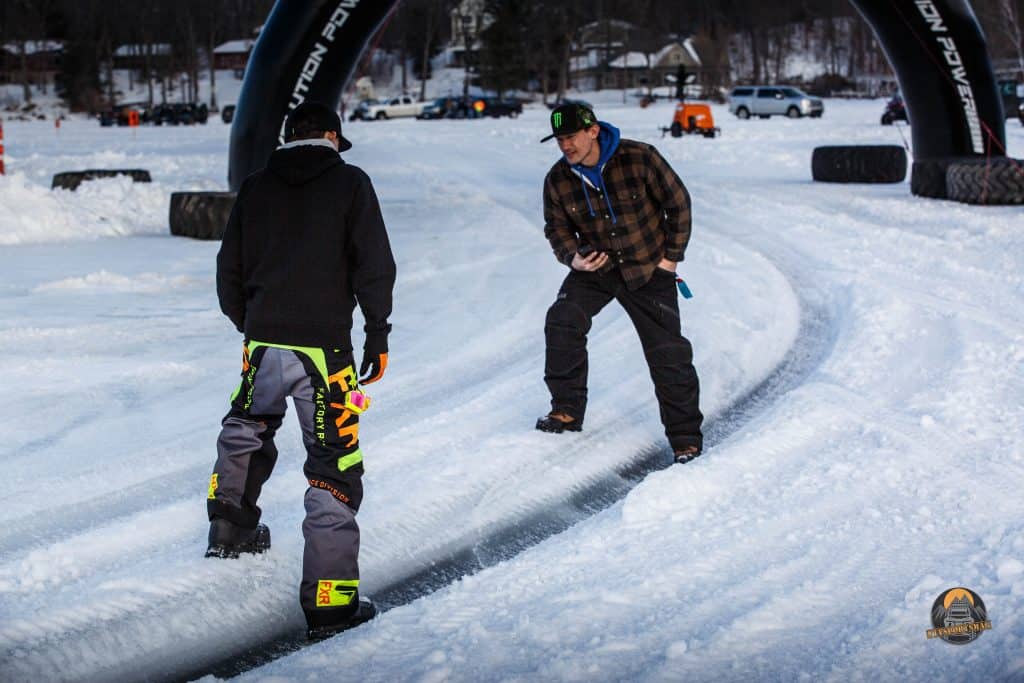 Spectators were out in force enjoying the tight racing and great weather over the weekend.

Michael Gilliland had stretched out a substantial lead over Brad Minerick, but with only a few laps to go he broke a front axle and spent six minutes in the pits having it swapped out. This handed the lead to Minerick who carried it to the finish just two minutes and 40 seconds ahead of Gilliland, and Pro-Stock racer Ben Enloe filed through in 3rd overall just over five minutes further back. Saturday night ended with a little short course racing under the lights, but with racers weary from the day that had just passed and wise to the 250 miles that lay ahead, competitors were limited. That didn’t stop Evolution Powersports from coming out and stealing the show in their Can-Am Defender however, as they ran three-dudes-wide in the 6×6 and drifted away with the win in the pit vehicle class.

Sunday’s racing began with Minerick taking off first from the green flag, with Gilliland hot on his heels as they looked set to battle for the next 250 miles. Gilliland was making a statement in his ruthlessly fast turbo-charged Yamaha YXZ, as he had caught and passed Minerick by the time they made it back around to the finish on the first lap, and he continued to stretch out the lead as Minerick battled losing 3rd gear and began to focus on just getting his car to the finish. Gilliland thought he had the race win in the bag but with six laps to go, his transmission destroyed 5th gear, significantly cutting his top speed which allowed Minerick to catch back up. On the very last lap of the race, Minerick caught and passed Gilliland and stretched out enough of a lead to take his 3rd win in a row at the Iceman 500, and first time win in the Pro-Mod class. Tyler Olson brought it home in 3rd place in the Pro-Mod class after his first time racing on the ice, while also behind the wheel of a bone-stock Can-Am X3. 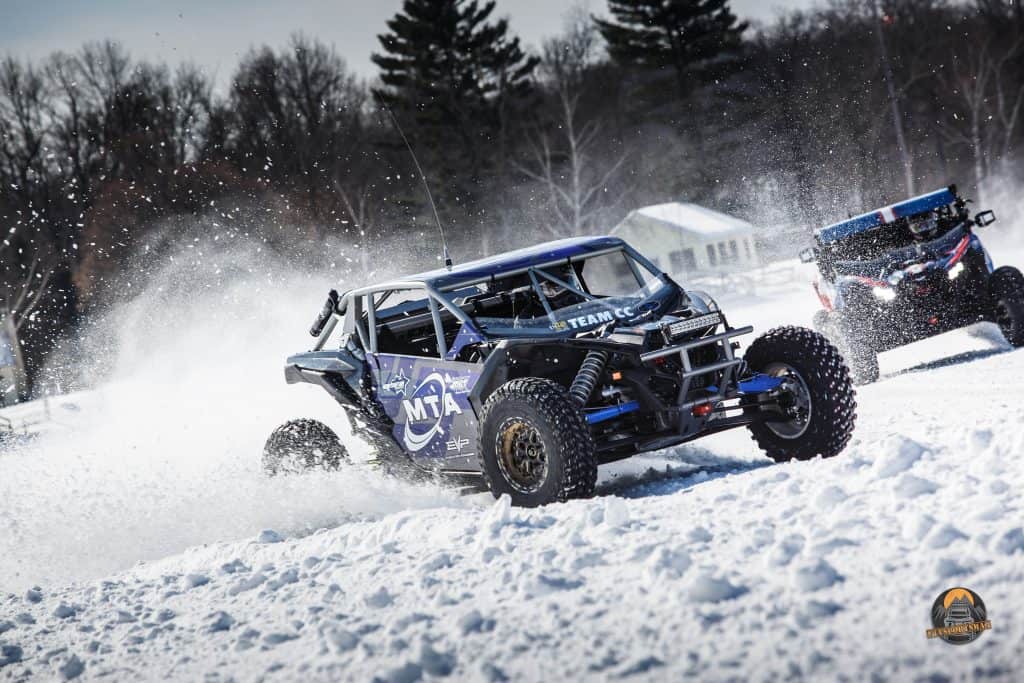 Bruce Binnquist and Billy Long showed that they had the speed to run at the front by setting the fastest lap of the race, but car issues combined with a rollover on day 2 took them out of contention for the win.

The Pro-Stock class was dominated at the end of the weekend by Ben Enloe, behind the wheel of his Yamaha YXZ, and he actually finished 3rd in the overall standings. School Bus Joe, aka Joe Glaser did his best to stay calm and consistent behind the wheel of his RZR XP 4 Turbo and earned his best finish yet at the Iceman race by coming across the line in 2nd, with Mike Vold rounding out the podium in 3rd.

While the mighty turbo-charged Pro-Mod cars might steal the show at the front of the pack, the battles back in Sportsman class were just as hot as those at the front. Scott Powell and Bryce Carlson battled back and forth all weekend long fighting for the win. Powell ended day one only 30 seconds ahead of Carlson, so Carlson and his team put together a strategy and put on a charge to take the lead on day two and hold it till the end finishing just 20 seconds ahead of Powell. The two Sportsman racers pushed each other hard enough to end up 4th and 6th in the overall standings, and Gold Rush TV star Rick Ness took home 3rd place in the Sportsman class in his first race on the ice behind the wheel of a Can-Am X3 prepped by Evolution Powersports. The guys from Evo Powersports stole the show on Saturday night by taking out the Defender 6×6 and throwing down some seriously fast laps in the beast with non-studded tires… having an extra pair of tires on the ground seems to help after all!

With 500 miles complete, the cars were worn out and so were the racers. While the weather was comfortable this year, the warm temperatures caused the ice to break down into slush giving the racers incredibly unpredictable track conditions, causing both mechanical failures and driver mistakes which obviously played into the results at the end. Those who persevered through the trials and tribulations of endurance racing on the ice were rewarded with victory, and those who faltered can only learn from their mistakes to come back stronger in their next match at Iceman 500. 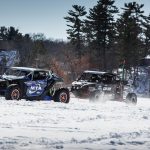 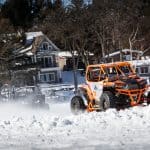 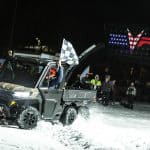 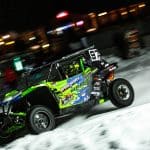 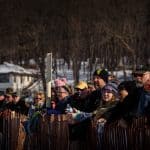 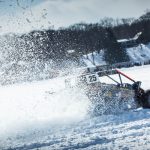 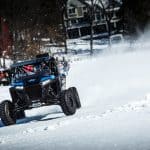 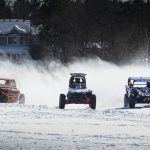 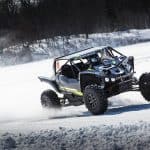