Behind The Wheel: More Is Better With The 2020 Defender. We See Exactly What The Can-Am Workhorse Can Handle 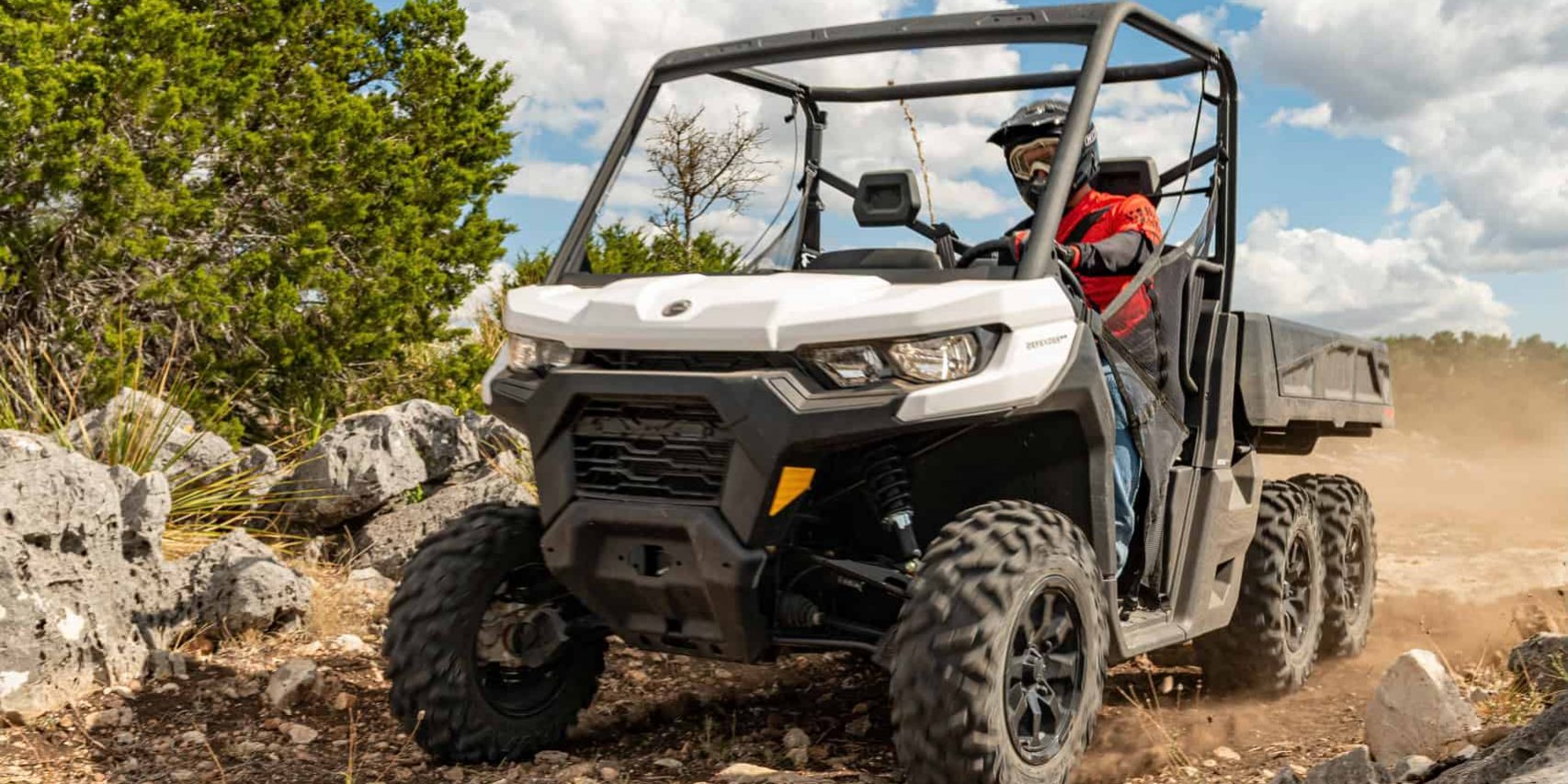 Behind The Wheel: More Is Better With The 2020 Can-Am Defender.

We See Exactly What The Workhorse Can Handle

Taking a few steps back from time to time to reassess is generally a praised tactic throughout any facet of life. Much can be said about evaluating where you came from in order to continue moving forward. Any given individual can learn from their actions and judgement, as can a manufacturer, even more so with such growth and success in a short span of time. 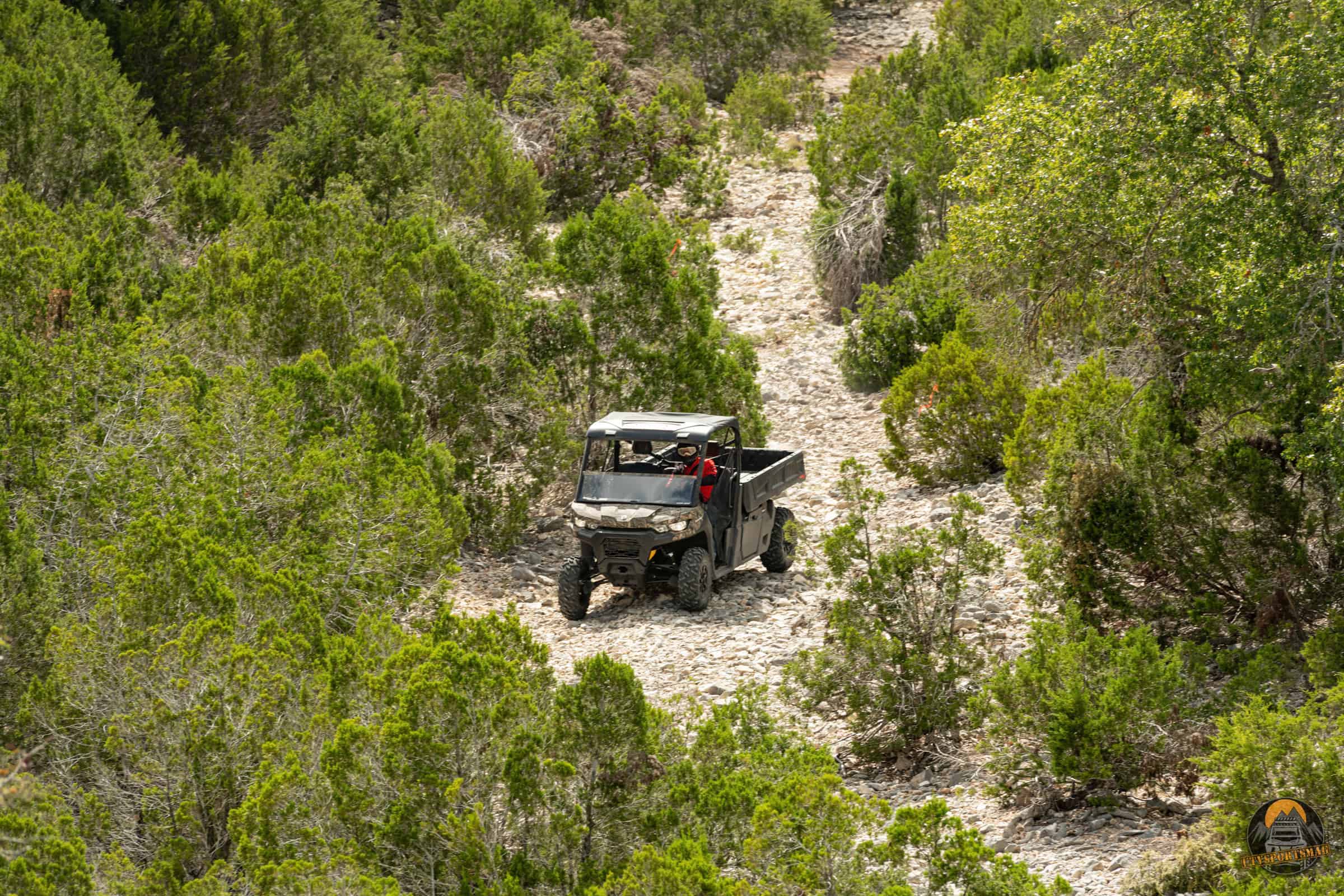 Quite often enthusiasts overlook that Can-Am Off-Road is just one brand of the much larger entity of BRP. A group that is overwhelmingly dedicated to innovation across all aspects of life, recreation, and the pursuit of progression. With countless awards, ingenious product development, and a “future is now” philosophy, you can count on each vehicle release bringing something fresh to the table. That is exactly what happened with the 2020 Can-Am Defender lineup.

Continuing to fulfill on it’s four-year promise of a new side-by-side vehicle at least every six months, BRP delivers the new increased lineup of the 2020 Can-Am Defender. In 2016, the utility model was released in accordance with the company’s promise to participate in all segments of the sport. With utility and function playing a huge role in its design, the capable Defender provided exceptional useful performance with control, and delivers to the operator the confidence to go almost anywhere.

At first glance many resemblances remain in 2020, but innovation has been brought to performance and comfort. To say the line has expanded is an extreme understatement. The extensive line has added two more submodels, PRO and Limited, as well as released the impressive 6X6 offering. The new platforms all offer the new wider 64” stance, more ground clearance, updated suspension, and reinforced steel frame that reduces flex by 30%. The 82 HP yielding Rotax HD10 V-Twin engine, offers an industry leading 69 lb-foot peak torque at a lower RPM for optimal power delivery during those work-hard chores and play-harder recreational moments.

Almost immediately upon firing up the vehicle, it was obvious the Can-Am engineers have a clear understanding that sound levels are an important factor in comfort, as the mechanical sounds inside and out were muted. The new sound deadening materials, thicker firewall construction, and the quieter exhaust all played a factor to a conversation friendly noise level.

Recognizing the immediate practicality of the PRO models, available in PRO DPS and PRO XT trims, I had to see what this behemoth handled like. Built on the Defender MAX chassis to accommodate the colossal six foot length convertible cargo bed, the long 115.5” wheelbase delivered the riding satisfaction I expected. I pushed the vehicle to the edge of its sporting capabilities, up and down steep hills, over large boulders, and through anything the treacherous landscape would throw at me, including a jagged rock river basin. Shockingly the platform managed it all incredibly well, only traits to note are a few expected skid scuffs and a bit more of a delay in the steering than we’re used to. But this is no near-200HP sport machine, it’s a 2500lb-towing, laboring servant—and it never skipped a beat. 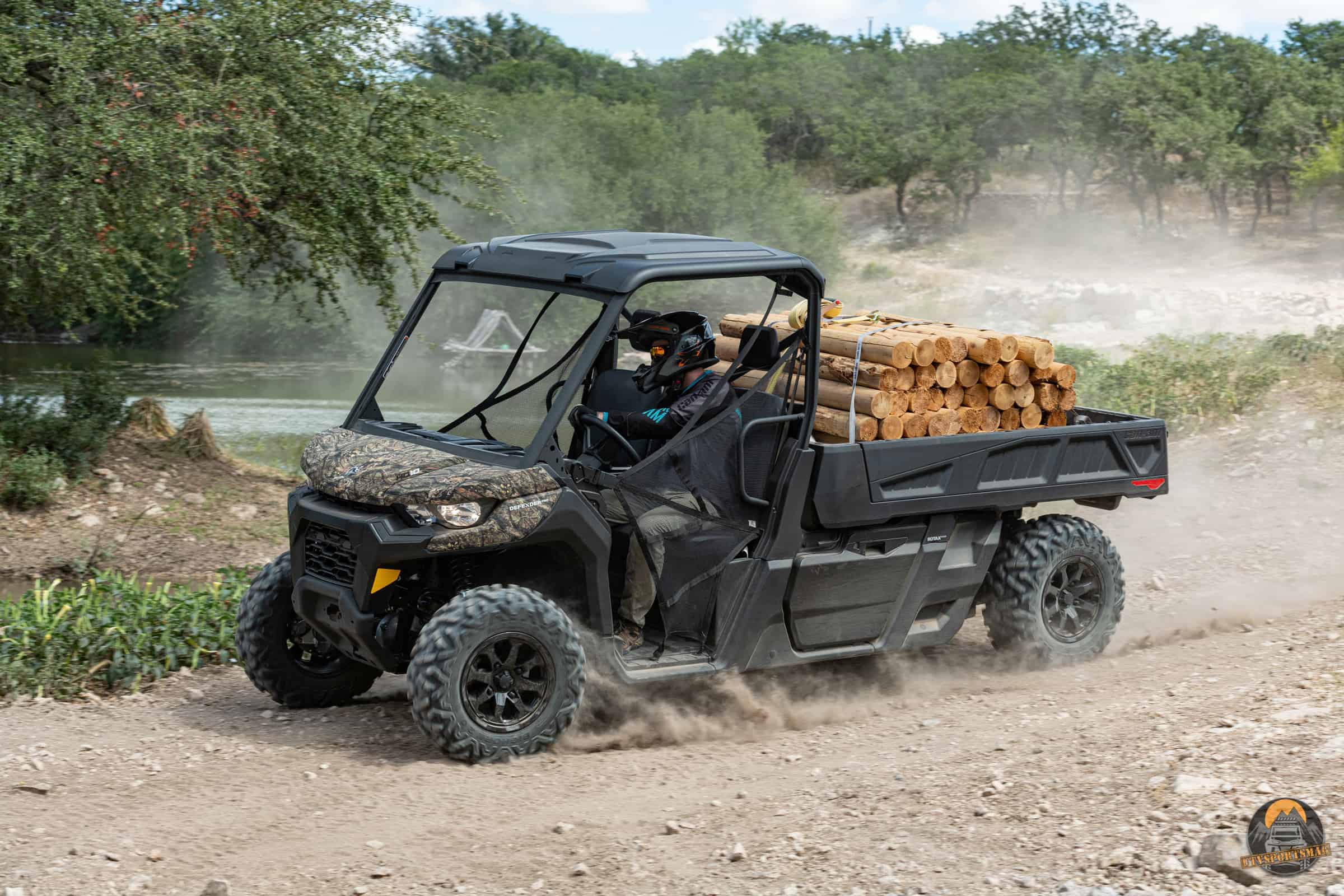 Stepping away from the vehicle led me to believe that the machine could be one of the most capable in its category, but we weren’t done yet. Next up was the 6X6. I was interested to see what impact the additional footprint would have on the handling more so than anything else, beyond the 500 lb increase in towing capacity. The extra live axle would take up the space of the impressive storage cargo box under the bed on the PRO. To better determine what would be more valuable, we hit the same trail. I will have to admit that the added traction did reflect some drag, but nothing a little more throttle wouldn’t solve. The turning radius was essentially unaffected, and the acceleration seemed consistent. Where it shined was in the rough and unsteady terrain, it truly filled the void eliminating any concern of traversing uneven grounds. The transition from loose soil, rocks, and even downed tree limbs was almost unrecognizable proving sometimes more is better.

With the hard work out of the way and the afternoon heat hard on the rise, I set out after the Limited model. Initial thoughts were true to what you would expect of any vehicle model that includes the term ‘Limited’. Bells, whistles, and everything in between. Just on the exterior, I took note of the XT front bumper, 4500 lbs winch, full cab enclosure, and distinct Defender body styling. But that was just the beginning. Once inside, I found more controls than anything I had seen before, switches and buttons for amenities like the 4-mode traction system, three position driving mode switch, wiper/washer, electric windows, and the long awaited factory auto “set it and forget it” HVAC system. To handle the needs of these and many more power accessories, the model is upgraded to a 850W magento and placeholders for even more switches. With all buttons played with and mission control set, it was time to cruise. 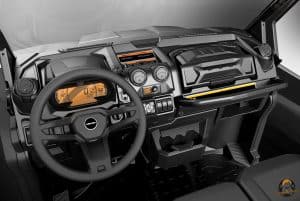 There are lots of things that can be said of the vehicle’s handling and capabilities, but in all its nothing short of what is to be expected of the workhorse, and very similar to that of the PRO model previously driven. But what must be said is the overall comfort this UTV offers. It’s incredible how quiet the unit really is. It’s far beyond all the submodel-wide engineering improvements but adding a true full cab enclosure with well-designed true sealing doors, full fabric headliner, and full glass on all four sides. A high-end appearance with unbeatable fit-and-finish.

The only noise inside the cab to consider was the airflow of the HVAC blower pushing much desired cold air into the passenger area. The volume of air was prevalent through all eight vents and the industry-exclusive automatic climate control was doing all the work allowing my fingertips to stay on the wheel. The variable compressor allowed more cooling capacity even at idle and manages temperature regulation without any manual adjustments. The system will utilize heat, A/C and airflow concurrently to achieve and maintain the desired temperature. I have to admit it made for the summer Texas afternoon journey incredibly enjoyable, allowing me to double up on the miles covered and never break a sweat.

Walking away from these models proved that a substantial amount of time and thought went into the most important component of today’s utility segment, the operator. Building a valuable tool is an accomplishment, but building a tool to last that considers all aspects of the job is innovation. We take great honor in getting to play in these UTVs and push them to their limits, but we understand that they are built with a purpose. They have key responsibilities in today’s workforce across the land to simply get the job done. We acknowledge the abuse they take and the reliability they must maintain. This new 2020 Can-Am Defender lineup proves that BRP gets it too. 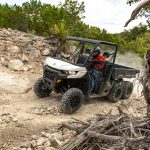 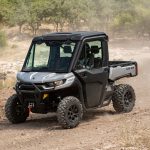 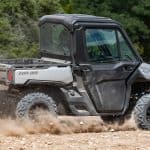 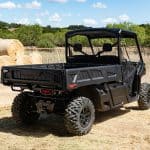 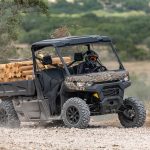 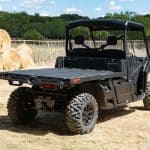 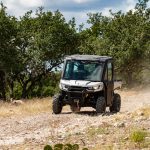 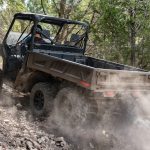