2019 UTV World Championship: A Brutal Sprint From Start To Finish! 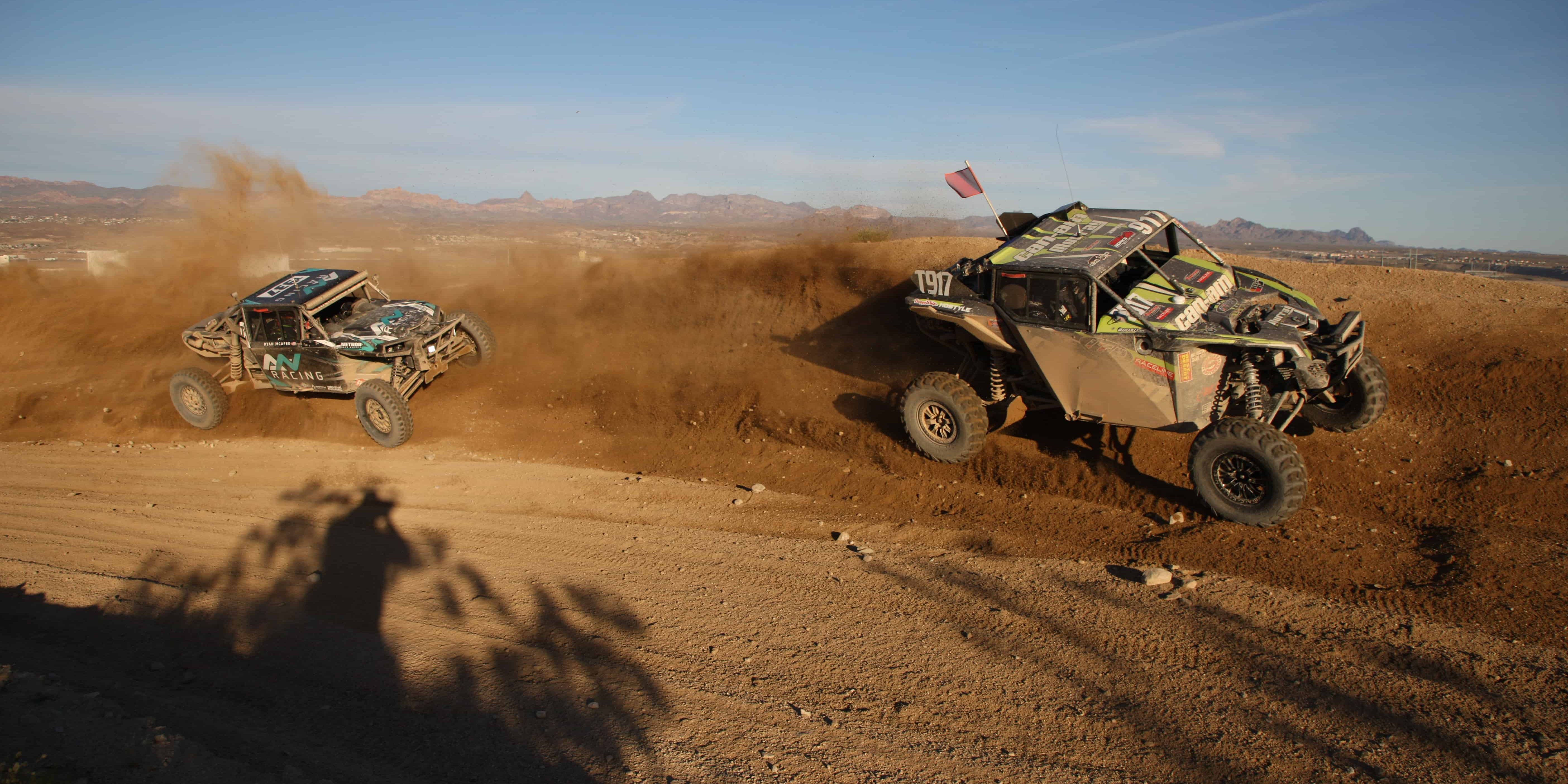 A Brutal Sprint From Start To Finish!

The UTV World Championships in Laughlin, Nevada (UTVWC) are not for the reticent. The abbreviated distance makes it a wide open sprint race from start to finish. Like pulling off a bandage, you know it’s going to hurt, so you hold on tight, and let it rip. There is no telling what might be revealed once the protection is pulled away. 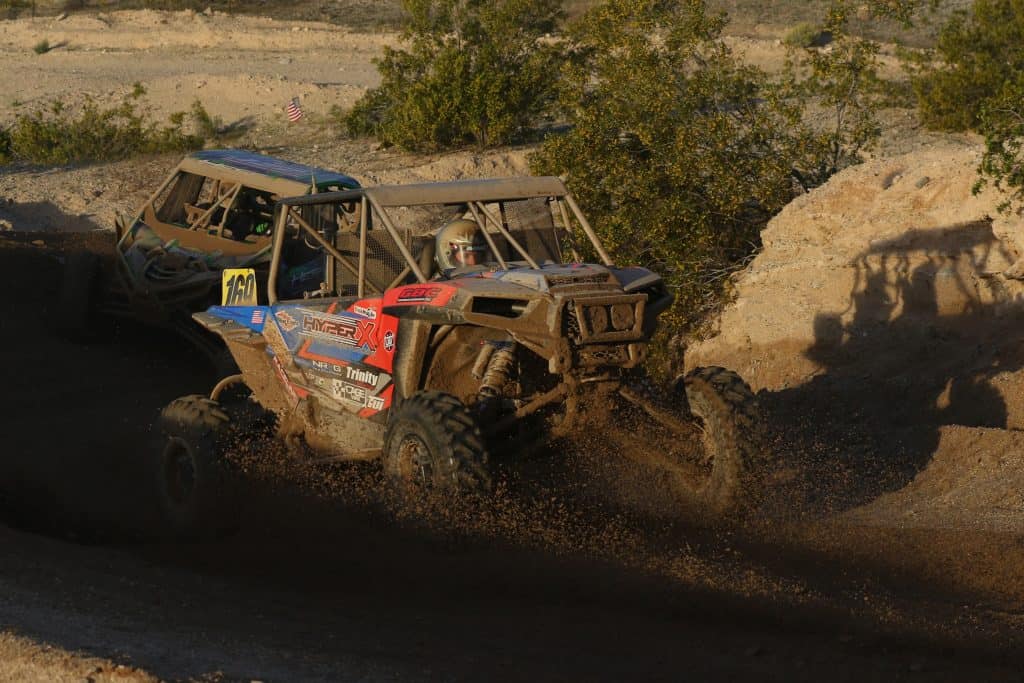 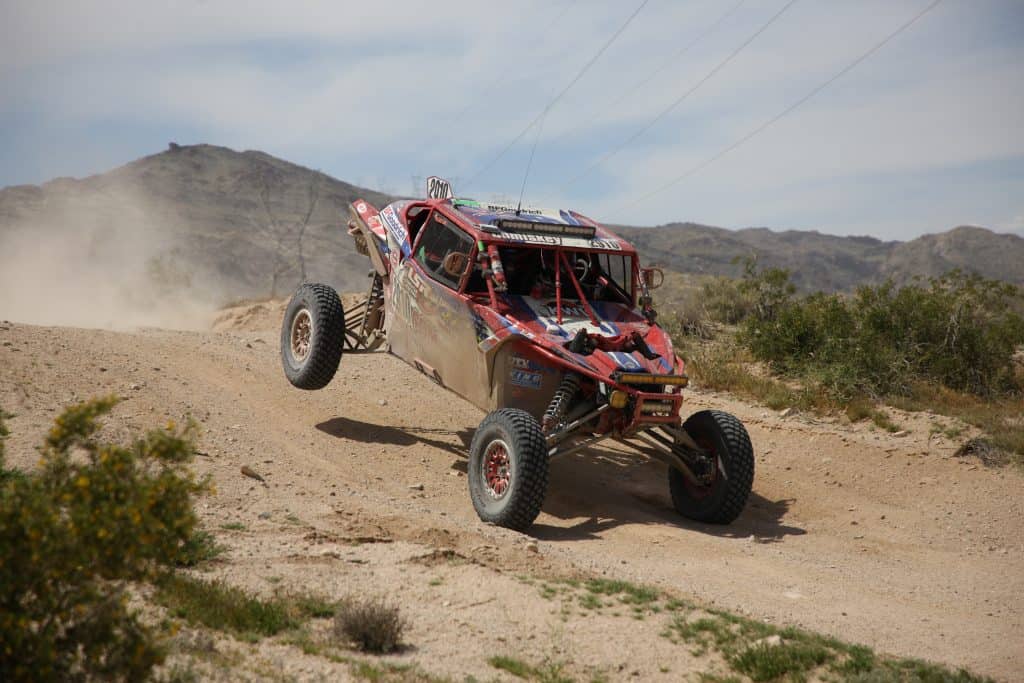 In the unlimited class, Brett Comiskey got the win over Michael Isom. Comiskey is concentrating on his new Turbo class car this season, but seems to win in his unlimited car whenever he gets a chance to run both. Isom’s new No Limit built car is super fast, and is keeping Comiskey honest. Jeramiah Drew finished 3rd.

The naturally aspirated class saw 16 year old phenom Seth Quintero take another win. Since moving up from youth class racing last season, Quintero has put together an impressive string of race wins and podium finishes. What makes his performance even more outstanding is the fact that he does all the work on his Polaris with a little guidance from his Dad, Aaron, in the family garage. To top it off, he has never laid a bumper on anyone. He prefers to race clean and pick people off by out driving them, not by getting aggressive. 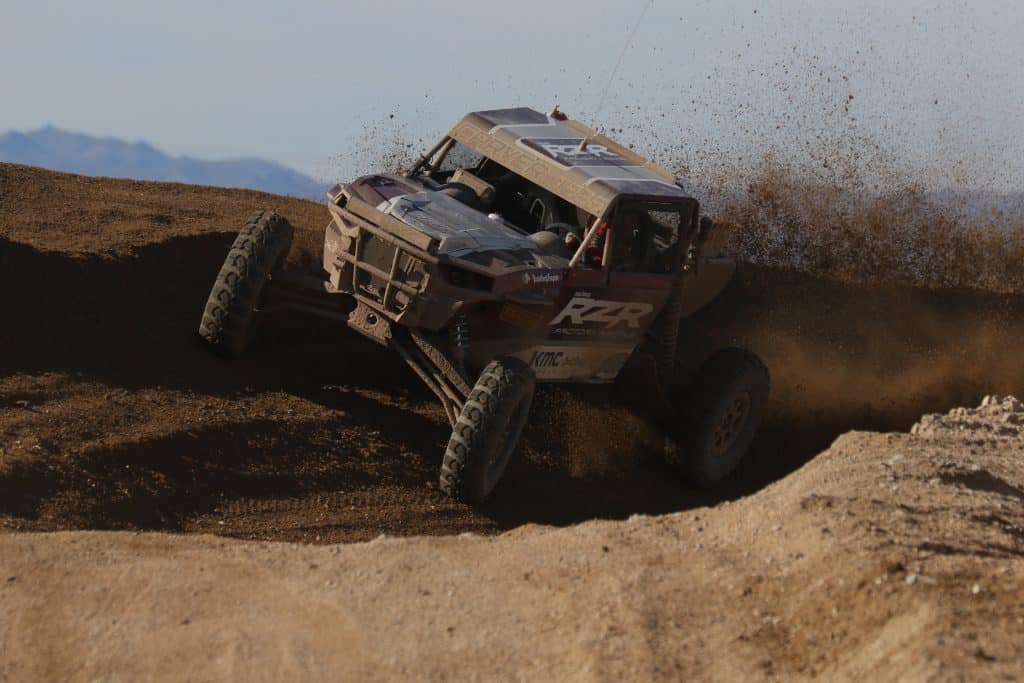 “The win feels super good,” says Quintero, “We started in the first row, and got the holeshot. We didn’t let off, and never looked back. We had some pressure behind us for the first few laps, but then we built a gap back to second place. We had to keep that gap because we planned to stop for a splash of fuel to be safe. I usually prep the diff, clutch and other parts between races, but this time I did a full engine and transmission; my first time ever. We broke a motor mount at the Mint so it all had to come out. I tore it down to the bare frame from the steering wheel back, and made sure every detail was perfect. It paid off with a flawless race for us. We caught some lappers about halfway through but I was patient. The Unlimited cars were difficult to get around. We would catch them in the tight, technical sections, but as soon as we got to the long straight sections they would pull ahead with their turbo power. I have raced in Laughlin enough times to know the track really well, and where I can get around the other cars. I played it smart and we won our 3rd straight race.” Mike DeLey finished second, and Dan Kaatz took 3rd. Out of the 44 NA cars that took the green flag, half would not finish the race. 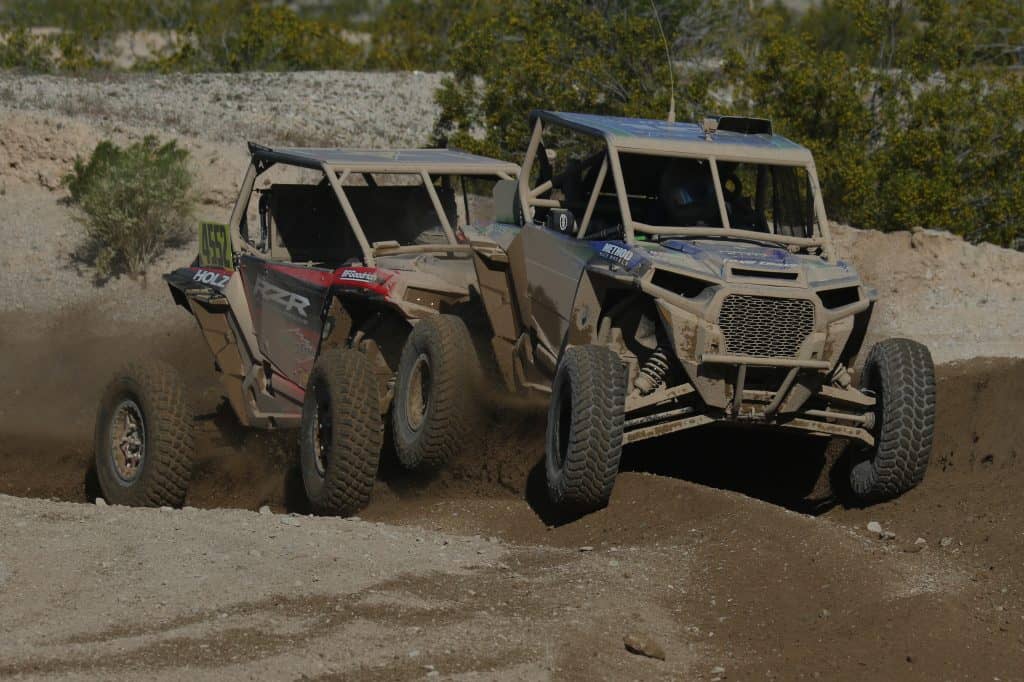 Next to hit the track would be the Turbo cars. The biggest class of the weekend, 62 cars were all fighting for the win. Similar to the NA class, attrition was high. Nearly half the field (30 cars), did not finish the race. After the green light went on, an elite group of the fastest turbo racers on the planet were out front battling for the lead. Blurton, Guthrie, Jones, Lambert, Murray; all the household names were setting a blistering pace. It was anyone’s guess as to who could maintain the pace, who would suffer a failure, and who would sneak up and insert themselves into the fray. In a race like this, it’s easy to lose track of someone who started back in pack, but makes a huge run through the field on corrected time. As the laps stacked up, it was clear that Blurton’s plan was to run everyone else into the ground. First it was Jones who had to stop in the pits. Then Lambert had a problem. Guthrie was close on his tail until he too had an issue. Guthrie maintained the pressure as long as he could, as Blurton could also fall prey to the punishing pace, but his car held together and he came out with his third UTVWC victory. Guthrie held on to second, and Jason Murray was third. It also deserves mention that Sven Ellstrom finished 4th, and Randy Romo rounded out the top 5.

“We started on the front row and was 3rd off the line,” said Blurton, “I got past Nicholas I think, and then battled super clean, but wheel to wheel, with Dustin Jones for about 4 miles into the desert before we got the lead. This year the whoops were bigger, but the choppy braking bumps were not as rough. Sometimes it’s so choppy that you can get arm pump like on a motocross track. This race is the most physically and mentally challenging. On the long desert races you are racing the clock. In Laughlin, you can see your competition. I usually race the production race, but they ran it on Sunday, so I raced the rally class in the morning in order to get a feel for the course. We got into lapped traffic on lap 4. We just went past them. I’ve raced enough in Laughlin to be able to charge through the dust. We would catch a glimpse of Guthrie whenever the course would double back. He would be back a bit, and then he was close. The gap got closer when we hit traffic. We heard that he had to stop and change a belt, but we weren’t taking any chances. On the final lap we did stop for some fuel and then cruised into the finish.” “We got a good start from the first row, but lap one was crazy,” says Mitch Guthrie Jr. “Blurton and I both got past Jones at the same time, but he (Blurton) got away from me in the dust. We would close to 15 seconds behind him, but then it would be 30. We hit lappers and the gap grew to a minute. Unless he had a problem, it was going to be hard to make up time even though we were pushing really hard. In the desert you typically run 80 to 90 percent. At the UTVWC it’s 100 percent. My co-driver asked if we were going to run this pace the whole time. I knew it was going to come down to who had a problem. Unfortunately it was me. We changed a belt and were so far ahead of the rest of the pack our second place was safe. It was a fun race; we played cat and mouse with Phil all day. When we saw other top contenders in the pits, we knew we were gaining points on them. Some guys race for the win, we want both. We want to win races, and championships.”

While many partied Saturday night, others were gearing up for the production races on Sunday morning. Short Course 1000, 900, 800, and 700 staging took place at 6:00 am. After 8 laps of intense racing, Colby Wemple took the win in Production 1000. He was still riding high after winning the day before as Seth Quintero’s co-rider. “We worked on the car for a month straight; I always wanted to win the big one,” said Wemple, “I started on the second row, and thought it might hurt me, but by the second lap in I had passed the entire front row. I was consistent; it got me where I needed to be. Last year I set the fastest lap’ but broke. This year I did my homework on how to make the car work, and it paid off.” 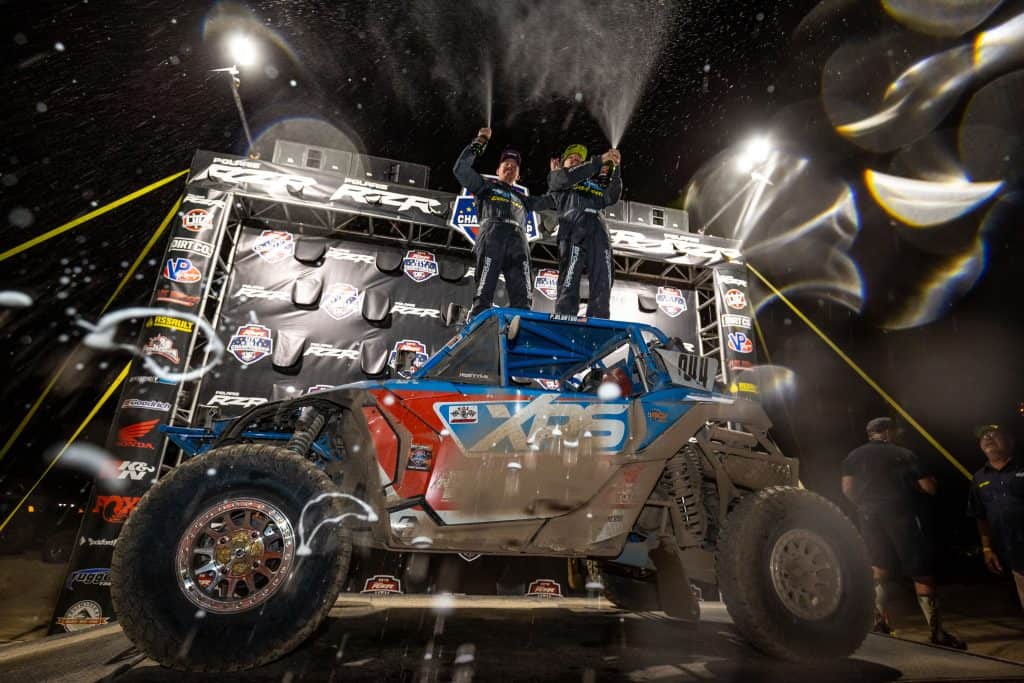 The final race of the event started at 8:00 am. 50 cars took the start, but like the other heats, attrition was a factor. The finishing rate was less than 50 percent. The race became a battle between friends, and Can-Am teammates Cody Miller, and Kyle Chaney. Miller came out on top with Chaney second, and Jake Carver in third racing his desert car! “Kyle and I came out a couple days early to do some shock tuning with Elka before the race,” said Miller, “My Can Am is powerful; I can pull anything in the straights, and we had no issues with the car. I was racing against Kyle for the win. On the second to last lap I was down by 10 seconds so I went as fast as the car could handle. I caught Kyle and won by 4 seconds. We are friends, teammates, and fierce competitors. I am currently leading the WORCS series in the pro turbo class. Winning the UTVWC title will be a great addition to my racing resume.”

The UTV World Championships is a stress test for the cars and drivers. Some passed the test, and were rewarded for their efforts. Others suffered the bumps and bruises that were dished out by a rough course and a feverish pace. Regardless of the outcome, everyone will be eager to line up again next year to give it another shot. 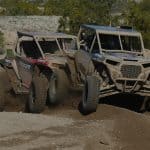 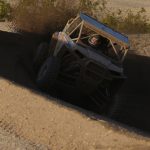 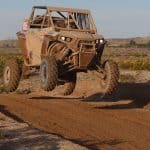 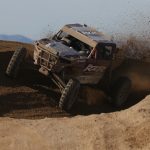 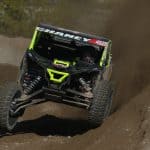 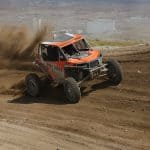