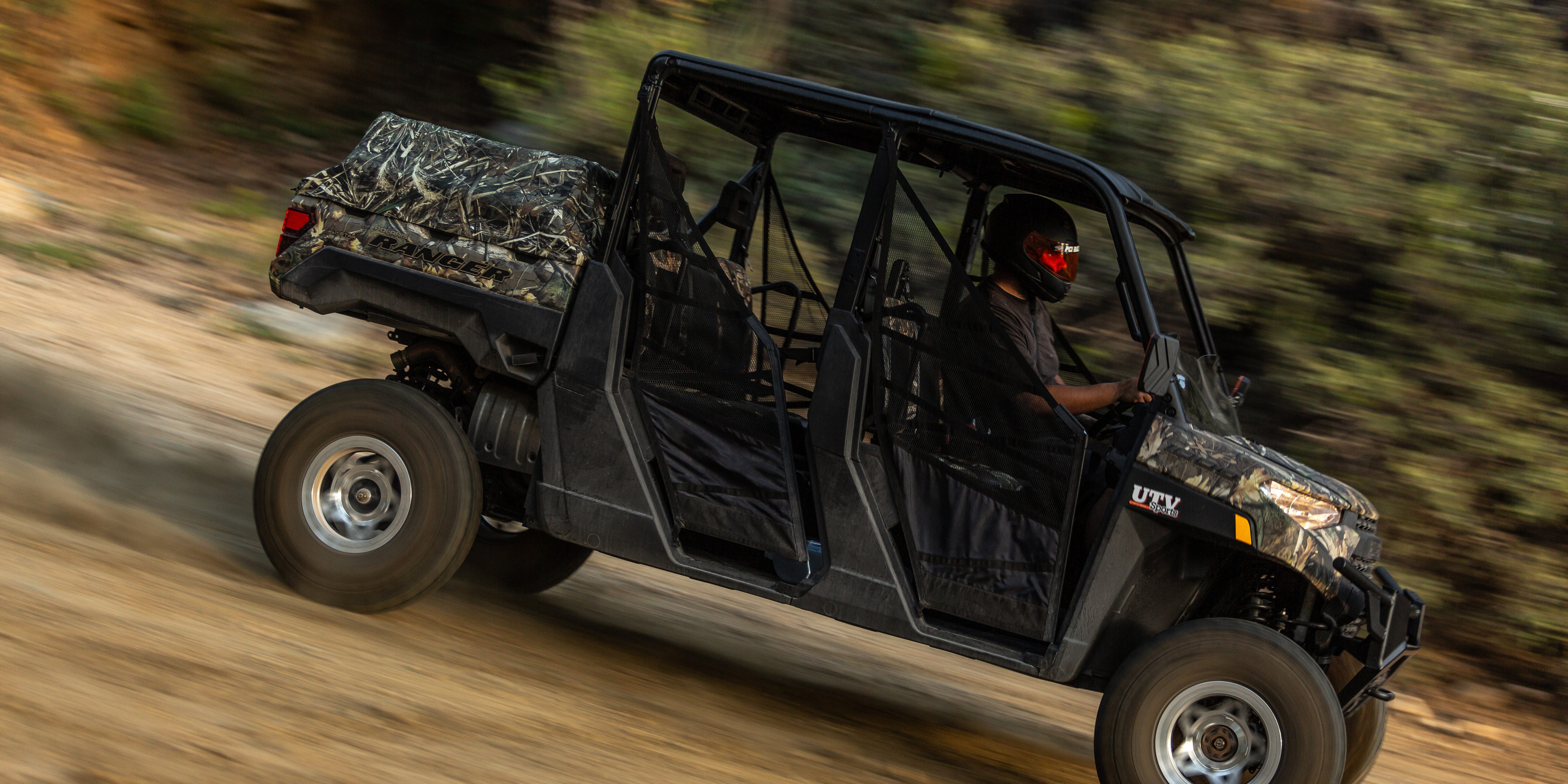 LAKE HAVASU CITY (Aug. 2019) – When you start doing the research for a new UTV, it’s hard to look past the glitz, glamour and coverage that the long travel and high horsepower UTVs constantly get. But we have to give them the respect they deserve, as the current sport UTV war between the manufacturer takes me back to the 60s and 70s when the big 3 automakers were in the midst of an all out horsepower slug fest. 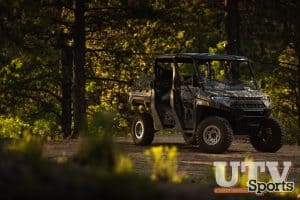 The sport UTV has its place in the market but what happens when you don’t need18+ inches of travel or 168hp? What happens when you need to hook up your utility trailer, haul it and your crew across wild terrain, or get you and your gear out to a remote location? You need a strong, dependable and powerful utility UTV that will get the job done. Polaris answered that need by releasing the new 2019 Polaris Ranger Crew XP 1000 EPS. Looking at the specs alone, it should be one sturdy workhorse.
We recently were given delivery of a new 2019 Polaris Ranger Crew XP 1000 EPS; at first glance, it looks big, and it definitely looks sturdy. Polaris has made a clear statement that they are really trying to improve the fit and finish of their lineup with this machine. From the stout front bumper to the smooth-closing tailgate, the fit and finish is excellent. With the straight, tight body lines and perfectly laid camo print on all panels, you can tell Polaris put a massive amount of time making this machine as fine-tuned as possible. A machine that looks this good surely can’t take a solid beating and survive without a few war wounds.

After a solid walk around, the team was fairly impressed initially. Quickly, we devised a plan to take the Ranger Crew up to one of its natural habitats and really put it to work. The thought was lets flex the frame, lets put it through nature’s proving ground, and see if those perfectly fit panels will flex. Will the new ProStar 999cc engine live up to the hype? We were determined to find out. 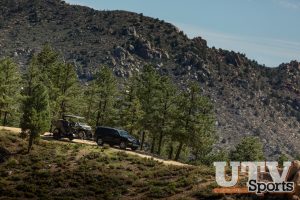 We hitched up, loaded up, and headed from the rocky desert to a greener and meaner environment. Climbing nearly 4500ft in elevation, we arrived. Upon unloading the Ranger Crew off the trailer, it just felt right. This UTV shouldn’t be tested in the wide open, high speed deserts surrounding us, that wouldn’t do it justice. It needed to be in a place it was designed and built for. As our team unloaded all our gear out of the truck, we took the Ranger Crew for an initial run in this forest.

Most didn’t set their expectations very high. After all, it’s not 168hp and doesn’t have 18+ inches of wheel travel so how fun could it really be? We had parked the truck and trailer on what seemed like the peak of the mountain with fun looking forest roads, and deep rutted trails going in every which direction. Heading down the the first shoot we were pleasantly surprised with how stable and comfortable it felt even in some serious pucker factor off camber ruts. With the Ranger Crew still in turf mode, it clearly had no issues getting the first 200 yards down the descending trail, but would it make it back up? Spinning around at the bottom made me realize how much tighter this UTV will turn with it’s recalibrated steering rack and how perfectly in tune the EPS is with it. I had no issues turning the wheel while the tires were lodged in their own awkward position. 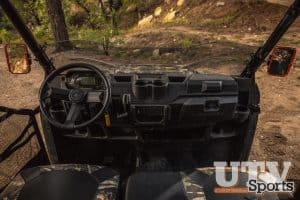 Turning around, essentially mid hill, is never really recommended but we did it anyway, aside from the EPS perfectly set, the chassis also felt like it was bolted to the ground. The seating position, being a little higher than we’re used to, felt slightly uneasy but there was no way the tires would do anything that was unexpected. Still in turf mode, we headed back uphill, and it didn’t make it all that far before the drive tire broke traction on the loose, soft dirt. With all certainty that 4×4 would be needed to make it back up, we reached down, locked up the rear differential, and stared at the challenge ahead of us…

Lets see if this Ranger Crew can thoroughly impress me right of the start. Even on the deep rutted hill climb, the motor delivered smooth and consistent power directly to the ground. My expectations of failure seemed to dull, we may actually achieve this in 2 wheel drive. As I approached the very top there was a prominent vertical shelf that would pose a threat. Carrying as much speed as it could at this point, we hit the shelf, and nothing but rear tire spin. Still quite impressive. Leaving the front tires at the base of the 30 inch shelf, we clicked it into 4×4 and it overcame the obstacle without hesitation. OK, we’re officially impressed and we’re only 15 minutes into the day. As we approach the rest of team, we recognize that they were watching the whole thing. The usual uneasy laughter of complete disbelief in driver and machine was prominent, but what else is new! 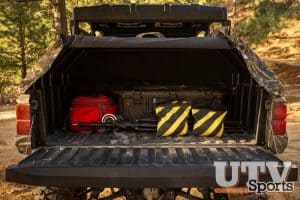 Has your wife, girlfriend or 47 kids ever accompanied you on a long day ride and packed what seems like the whole house? I would bet $1that our photographers pack even more. As we load cases of lights, stands, sandbags and camera equipment into the ranger we were all stunned at what it could hold and the tie down options provided. With the bed overflowing we turned to the cab for additional storage. Lifting the seats we found great cubbys for all of the smaller items that we didn’t want bouncing around our lower extremities. The ice chest we brought fit tightly and securely under the rear passenger seat perfectly. As we all jumped in, we all announced that the 2019 Ranger Crew XP 1000 EPS has to be the ultimate adventure/workhorse platform with all this storage.

Packed with equipment and bodies we take off into the hills. The stout 82hp powerplant pushed the overloaded Ranger Crew through all the steep fire roads with ease. With just enough power to intentionally break the tires loose and slide it around some corners, we had glimpses of a sport UTV feel, making it a lot of fun to drive. As we scouted spots for the photographers, we had to creep and crawl down some tight and rough trails. Between the 13 inches of ground clearance and the optimized engine braking, the 62.5 inch wide Ranger Crew did everything we asked of it. The accomplishment was impressive itself, but with a full load of passengers and gear, we began to understand what the clear difference was between sport and utility. 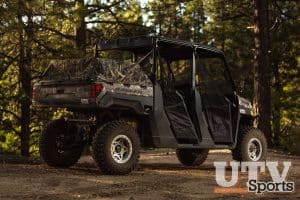 With some down time for photography, we were able to locate some ideal trails to push the limits even greater. There is nothing we find more enjoyable then having approval to hang a vehicle out, pushing it and the driver, to the limit to get that great shot. It was no different with the Ranger. Although it doesn’t possess the power and chassis to go over massive whoops at high speed or slide sideways for what seems like an endless drift, the suspension and low CG allow for a phenomenal ride through the rain rutted mountain trails making it a joy to drive. At 6’4” tall, one driver often finds cabins of most UTVs tight and uncomfortable on longer rides, not the case today. After a full day in the Ranger Crew, he felt comfortable and relaxed thanks to the new, thicker contoured seats and added 5 inches of clearance in both the front and rear rows. Do we dare say this machine offers Business Class amenities? It does have 8 cupholders and 19-gallons of in-cab storage. Yes, we filled those up too. 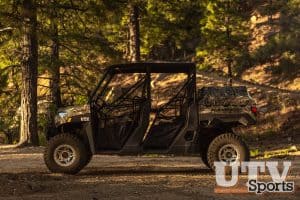 As the trail ride portion of our day came to an end, we found ourselves at a decent size water crossing. Before our photographer barely even got a single word out and we all knew exactly what he would say. “Let me out and hit it!” Not difficult to convince this crew. The only question now is at what rate of speed? With one foot out of the Ranger and camera strapped to his back, he heads for dry ground. We grabbed reverse via the easy-to-reach gear shift on the dash, which is reverse patterned from the RZR.

A safe distance back, we wait for the green light from the man behind the lens. We engaged 4WD, prepared the cargo for submersion of unknown depth and green flag! With a safe assumption of the majority of water spray to the left and right, we carried some speed. The one thing that we did not take into consideration, that massive front bumper. Being the industry’s largest stock bumper, it’s designed to take a beating and protect the body from punishment. Turns out it also deflects water incredibly well, just in the direction of the trees. Straight up!

With now a wall of water in front of us, we quickly realized the crossing was also much deeper than we anticipated. Hitting the quick left hander after the crossing myself and the Ranger Crew were soaking wet but it wasn’t phased. It didn’t bog, slow or hesitate, it took the water head on and just plowed through it. The photos we got were well worth mother nature’s car wash.

As we got back to the trailer, dripping from every corner, we talked in great detail about the outcomes of our Ranger Crew adventure. Overall, all participants agreed that the power and delivery was better than expected, the ride and comfort truly came as huge surprise, and the payload volume capability was more than what we ever thought possible in a 113” wheelbase platform. We tried to find something negative to say about it and the only unanimous decision was that it badly need swinging doors (which are an option). It may not be at home in the open deserts and big bumps but that’s ok, it wasn’t designed for that, we still think it will do it well though. Putting it in its natural habitat we were very impressed with overall abilities of this machine and feel it makes the perfect very-capable fun-loving workhorse for any outdoorsman. 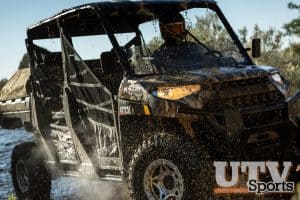