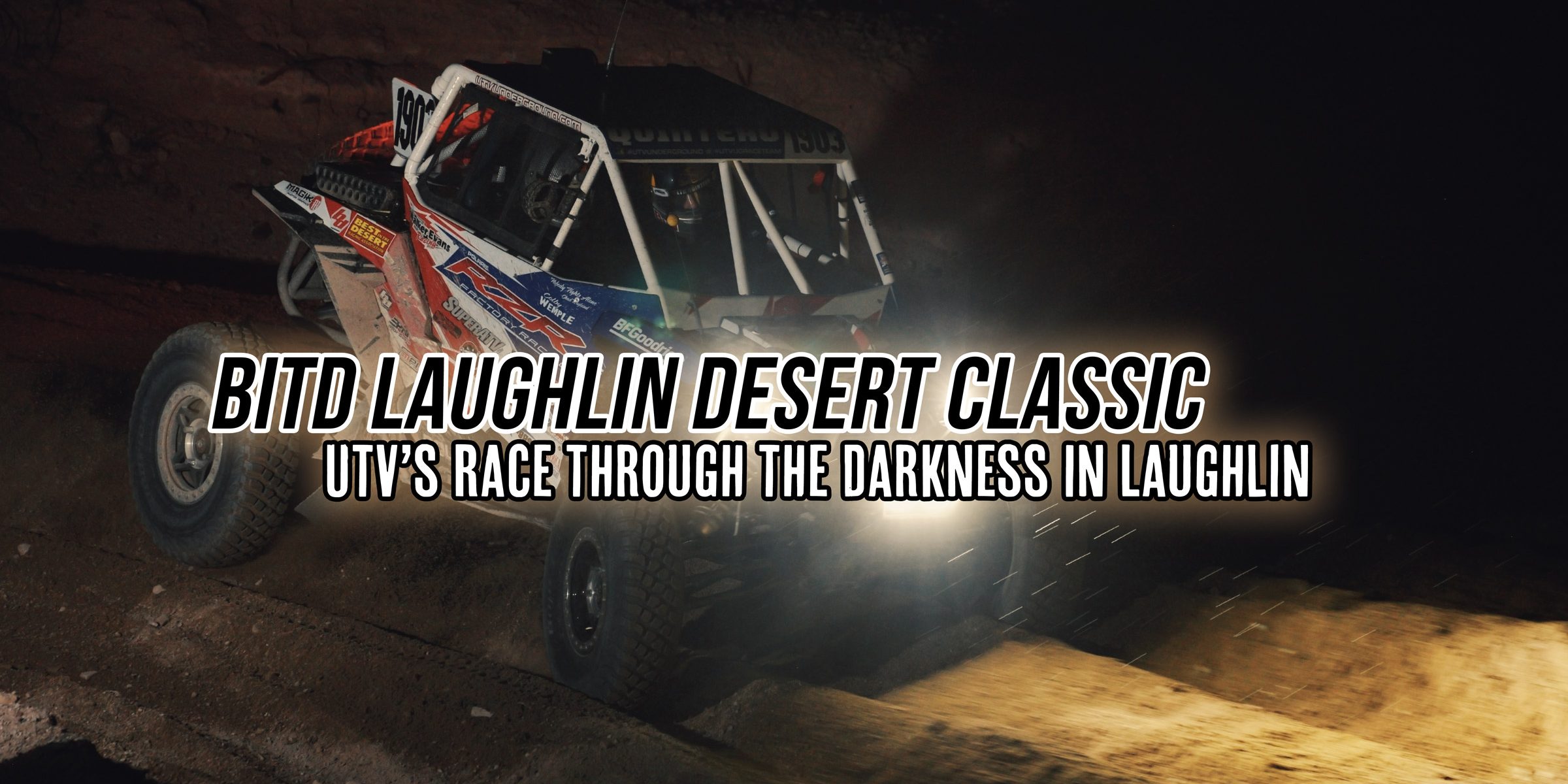 UTV’s Race Through The Darkness In Laughlin Competitors had a new twist this year at the Best in the Desert series Laughlin Desert Classic in Laughlin, Nevada. They would be completing 8 laps of the same 16 mile course, but this time they would be doing it at night. Racing in the darkness adds a new feel to a familiar race. Some drivers go faster as they develop laser focus on whatever their lights expose. Others see too much. The reflections and shadows can play tricks on the mind. Typically at this race, any mechanical issue will take you out of contention. There just isn’t enough time to make repairs. However, some teams that finished on the podium overcame broken belts, or axles. Their unplanned pit stops were still fast enough to keep them in the hunt. 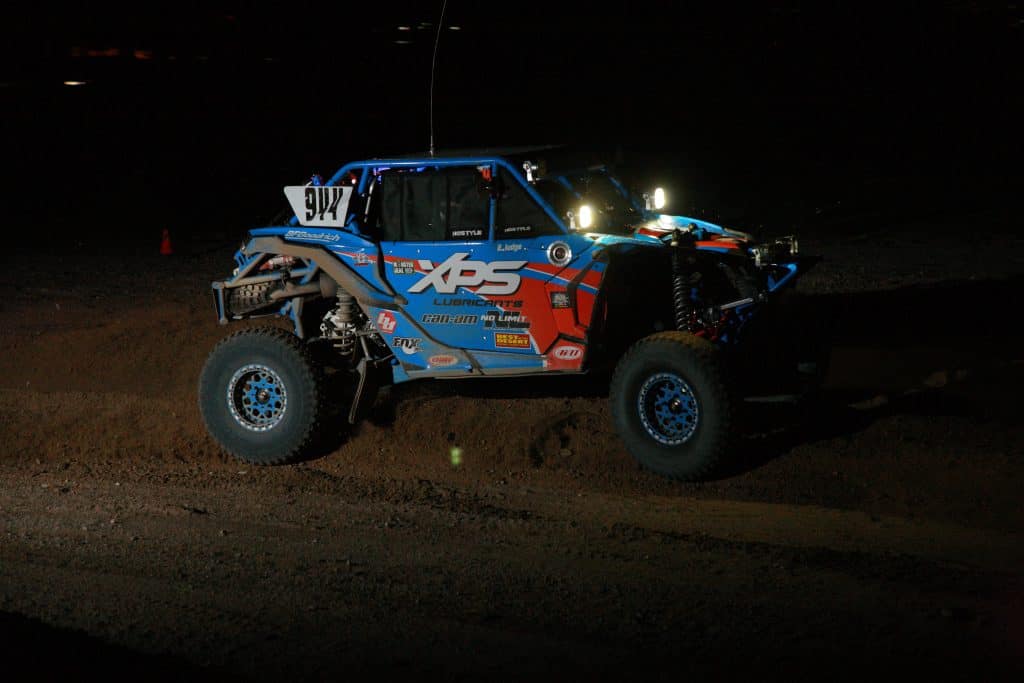 One driver who had a flawless race was Turbo class winner Phil Blurton. As others were slowed by issues, Phil poured it on and finished over 5 minutes ahead of 2nd place; something that is unheard of at a sprint race like this. “We had a perfect race,” said Blurton, “I used to race motocross where the start is critical, so I always concentrate on the start. We got the hole shot but Dustin (Jones), battled with us to the very end. Because of the rain, there was no dust. UTV’s don’t have the biggest charging systems so when we had some breathing room about halfway through the race we turned the radio off. We had no idea where we were running until we finished. In the long races the gap at the finish is usually really tight. This is the shortest race and the gap was one of our biggest. We have been at Laughlin so much that we know how to set up the car to go faster. It’s the one course where we have a special set-up just for this race. It’s fun when you are getting faster every time. I thought we might be a little slower in the dark, but we ran faster. It just seemed cooler so we didn’t have to worry about the belt temperature. The win puts us in a good points position heading to Pahrump for the last race of the season.” 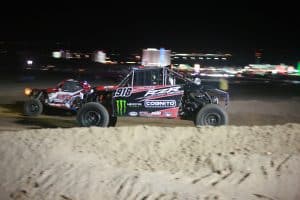 Finishing 2nd was a man who knows how to run fast; Justin Lambert. “Laughlin is rough and a drag race,” says Lambert, “It’s only a 16 mile loop, and this race was 8 loops so it gets super rough. We started in the 31st position. The grid was in rows 3 cars wide, so we were in the 11th row. The race started at 10:30 pm and we expected some dust along with the darkness. 148 miles for a desert race is pretty short, so we planned to let it all hang out. Knowing we were testing the limits, we made our way into the top 5. While battling for 1st place on lap 5, we broke a rear axle. We lost time on that lap while limping to the pit. While the Cognito boys quickly changed the axle, I had to watch the other racers go past. We got back out on the course and drove harder than ever. We managed a 2nd place finish; 6 minutes behind the winner.” 3rd place in the Turbo class was Branden Sims. “We were only 17 seconds behind Lambert but we didn’t know it,” said Sims, “It’s such a small course it’s hard for the crew to keep track of the split times. My RZR is a two seater so it has a smaller fuel tank. I planned to do one stop on lap 5 for fuel. On lap 7, I was low on fuel so I had to stop again. I should have taken more at the first stop. I love racing in the dark. I was pushing Donald to run this race at night. I grew up riding in the dunes, and we would always ride at night. We have several Baja Designs lights on separate switches. I can tailor the lights according to the conditions. I am testing a new Laser light that nobody has yet; I was the test dummy. I can run whatever group of lights works the best. I started in 4th place and got the hole shot. I saw Jones on the side of the course, and then Carver. We got into lapped traffic but never saw Blurton, he was on fire. There was no catching him. I keep thinking if we had known it was only 17 seconds we could have made that up somewhere, but we will take the podium finish. We are having a good year; running consistent, and feeling confident.” Jason Murray finished 4th and Bill Zemak rounded out the top 5.

In the Pro class, Robert VanBeekum took the top spot. VanBeekum has a ton of short course racing experience that he put to good use. “I don’t like racing at night, and it’s the first time I’ve done it in a long time,” admitted VanBeekum, “I didn’t have amber lights, and the dust was really bad at the beginning. I started 13th and came out in 15th when my car stalled on the line. I started passing cars right away. I guess some of the drivers were nervous; they didn’t want to let me pass. They were scared to pull over in the darkness. We did a solid prep, no flats, and no failures. I had to push really hard. We were at full throttle everywhere. On lap 4 I started to shred a belt but we were on the long downhill section into the hot pits. The belt held on until I made it to the pits. I had one guy there, Kevin, and he got it changed and fueled me in 3.5 minutes! I then went out and passed all the cars that passed us while we pitted. I couldn’t relax for a minute. I would charge really hard in the turns and in the technical stuff. It worked out great for us.” 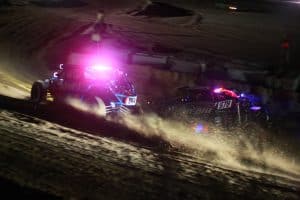 In second place was relative newcomer Macy Poelman. Her brother Dodge was running the car and got several great results before Macy took over. In only her second race, she landed on the podium. “I haven’t driven much, but I raced the Mint the last 2 years with my Dad,” said Macy, “I raced at the UTV Championships and now at this race. Our race went super smooth, and it was super fun. We had no flats and no problems. We only made one stop in the pits for fuel. We are not racing in Pahrump but I would like to do more races next year. I want to race the Mint again for sure. I love racing, it’s one of my favorite things to do. When I hear we will be going racing I can’t sleep until we get there. I love being out in the dirt.” The racing gene definitely runs in the Poelman family. Seth Quintero had another podium finish with his 3rd place. Gunner Savage finished in 4th place, and Kaden Wells was 5th.

In the unlimited class, we had a 1st time winner; Brett Comiskey. Brett is a busy man; he raced the LDC, and then flew back to Australia for the last round of the Dewalt Sxs Championship. Brett will also be competing in the Baja 1000 in a couple weeks. “Everything went to plan with our Lonestar car,” said Brett, “We had some gremlins at Vegas to Reno so it was great to come back with a win. We picked them off one by one. On the 1st lap we built up a minute and a half lead. On lap 3 it was 5 minutes, so we just held that gap. It was dusty; the wind was blowing right down the course. I only got out of shape once; we had a little moment, but kept pushing along. The last lap was our fastest. I am a heavy equipment operator and work a lot at night so with my Baja Designs lighting the darkness was no issue. It was good practice for Baja where I will probably be driving a night section. Everyone has been great to me; Lonestar, Sims, and Mark Burnett. They get my Aussie sense of humor. It’s been an awesome experience.” Dustin Walker was 2nd on the Unlimited class podium and Jeramiah Drew was 3rd. 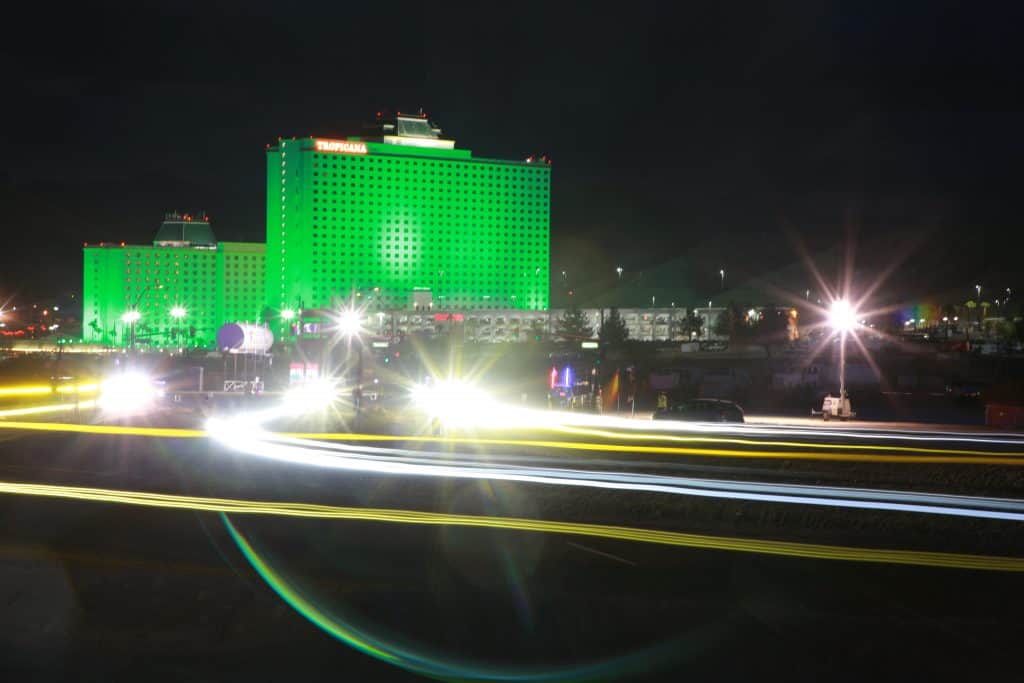 The racers will be doing a 180 as they head to Pahrump for the final BITD race of the season. Pahrump is rough and extremely rocky. The racers will not be running flat out, they will be trying to survive to the finish line with championship standings in the balance. 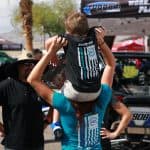 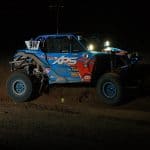 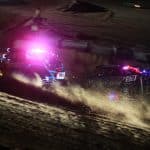 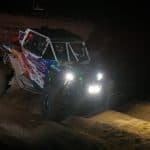 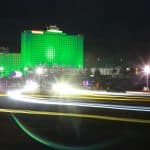 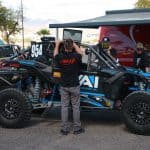 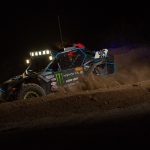