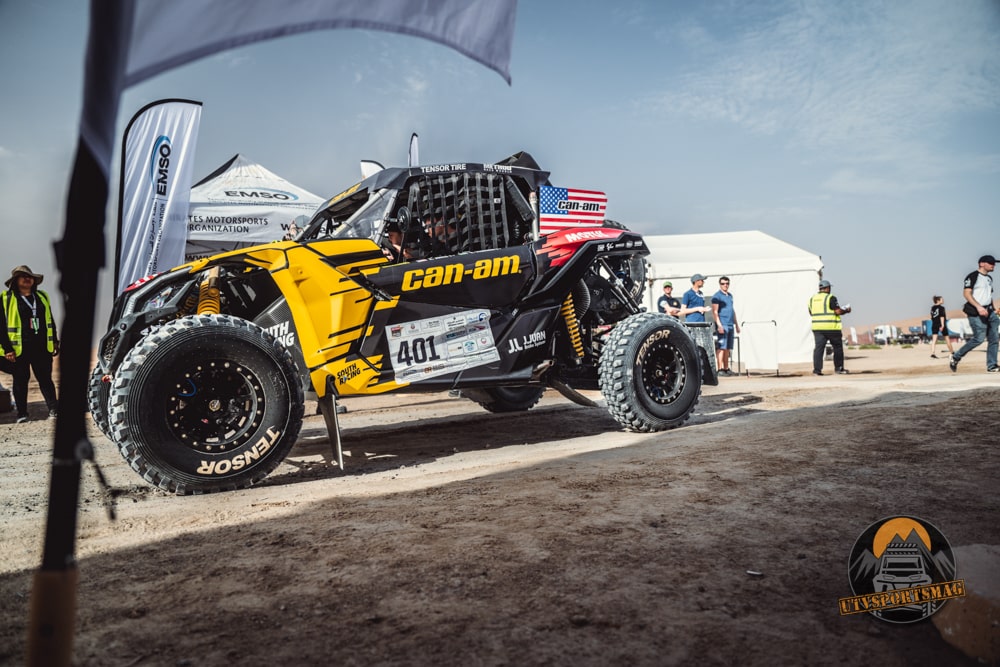 We’ve already talked to the third-ever American Dakar podium finisher, immediately after this year’s finish line. At that time, he said the goal for 2022 was to repeat his World Rally-Raid Championship victory. After the fourth stage of the Abu Dhabi Desert Challenge, we caught up with AJ Jones again, and asked how that plan was working out so far.

Q: Last year it was your first time here, and you earned the win. What were your first impressions about the Abu Dhabi race?

A: I like it a lot, staying in hotels is nice, instead of being out in the desert in the middle of nowhere. The dunes are very nice but they are scary, all the drops that they have. Ten of them can be nice and round, and then after the eleventh—a thirty-foot drop. Last year I didn’t know what to expect and we washed up a couple of them on the first day… then I started to understand how it works here and adapted my driving style. I was driving against the same Polish guys who kept winning stages. The victory was hard, I entered the last day with a one-minute difference from my Polish rival and all day was really stressful … but we got it done. 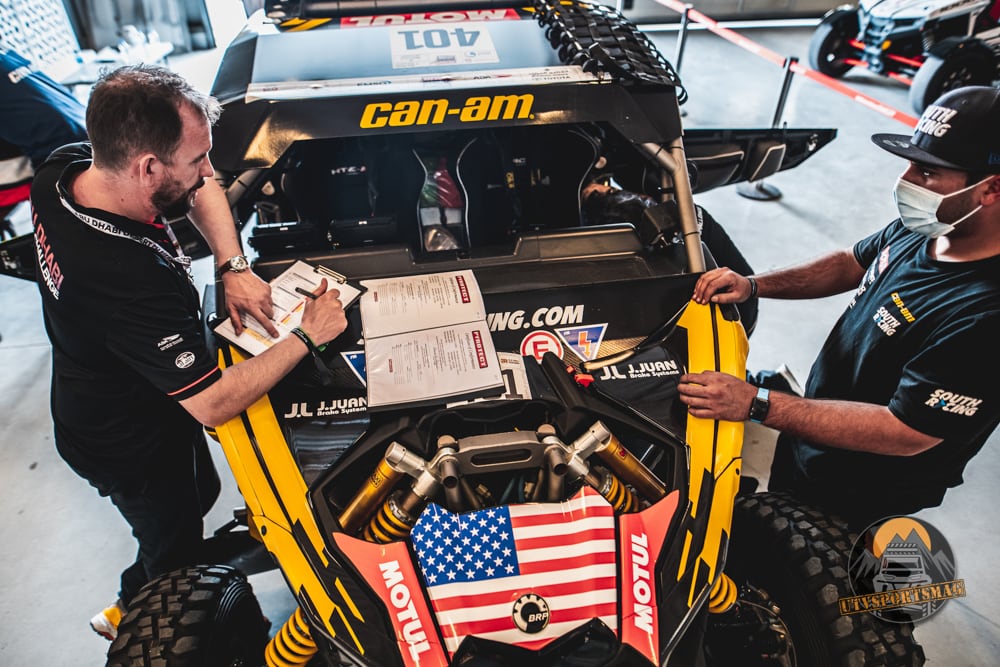 Q: After having won everything possible in 2021, any updates on your 2022 plans?

A: Last year we’ve achieved what we wanted to do—so really just trying to repeat and again, win the World Championship. Last year I won three out of four rounds, Andalusia, Kazakhstan and Abu-Dhabi races. We didn’t win Morocco because I had a mechanical failure. I was going to win every round of the W2RC this year; it would’ve been cool, but we are not going to win this one, so that’s over … I would like to win Morocco because I’ve always had really bad luck in Morocco. Crashed my first time there, it was my first rally race ever. And in 2021 I had really bad luck too, so I’d like to win that for sure.

Q: On the first day of the Abu Dhabi race you didn’t complete the stage. What happened?

A: We were going down the road; everything seemed good, but then the car came to a stop. We set up there, we changed everything we possibly could, got it back running again, spent a lot of time there in the desert. Finally ended up here at the bivouac … Yeah, it sucks, but it’s racing. Scott (Abraham, team manager) said it never happened before. It was a rotating shaft in the engine that lost one of its teeth and that tooth hit a sensor and killed it. Never happened before. It was the same car that I used for Dakar. If Dakar would’ve been 200 kilometers longer, it would’ve happened at Dakar. As bad as it is, I’m glad that it happened here, not on the last day of Dakar because that would’ve been heartbreaking. 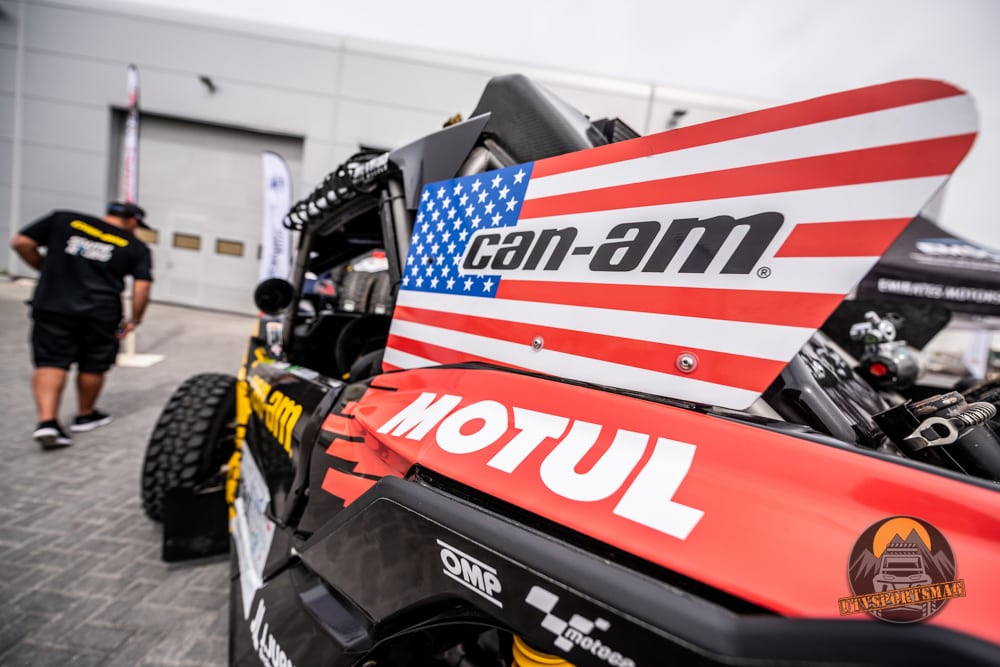 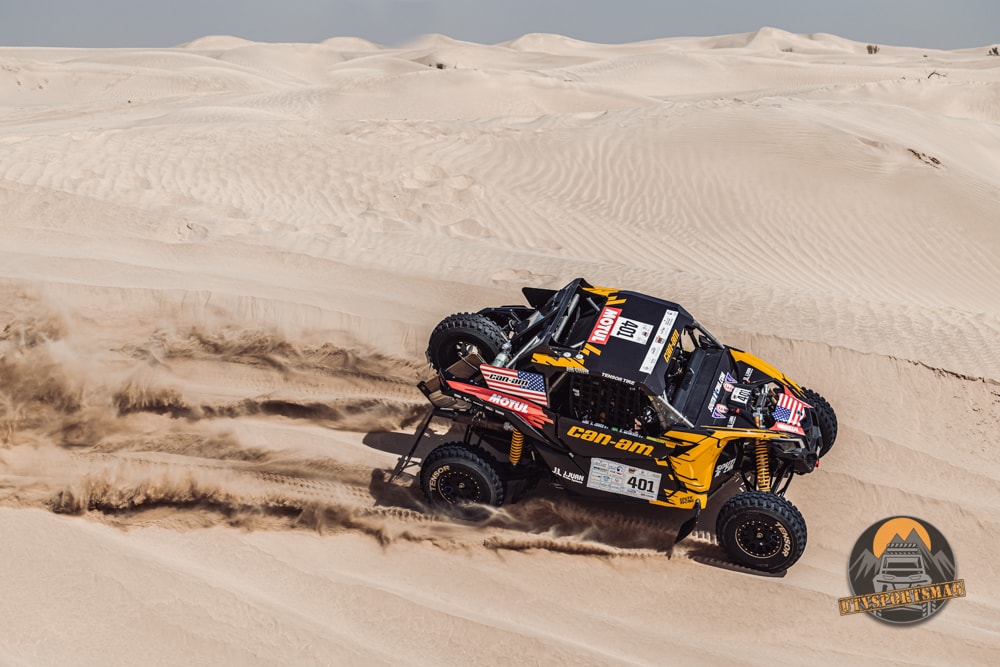 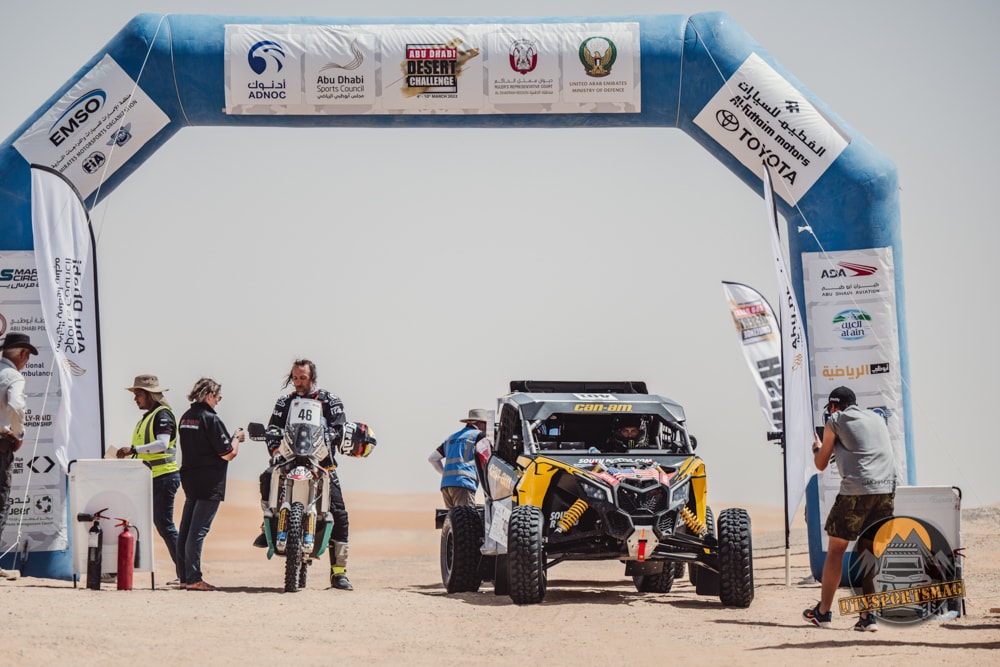 Q: Do you have jet lag? Any other sides of racing that people don’t see?

A: When we got here, from my house it’s 12 hours’ difference, the exact opposite. In the  first three days, I was asleep at 4 p.m. every day, and then I woke up at 2 a.m.—it sucks. It takes a couple of days for sure. I try to come a couple of days earlier, have some time to relax. It’s the same for all European and Middle Eastern races. Some of the times we come in late and we have to do shakedown the day after I get off the plane and at shakedown I’m falling asleep … Sometimes it’s one-two flights in America, one flight in Europe, one flight in the Middle East and it takes 30 hours to get here. By the time we get here, I want to sleep and Scott tells me we have to do the shakedown.

Q: Are you doing anything else besides racing?

A: Right now, that’s my job … I went to college when I graduated high school, and after that I got really interested in racing, worked as a mechanic for my dad’s cars … Learned about that, started riding around with him during the recce in Mexico, and then eventually I jumped into the driver’s seat. My first race was in 2018, the first time I raced a car, ever. My first trophy truck race and then my first rally race was the same year in Morocco. I haven’t been doing that for long but it feels like a long time because we’ve been doing so many races since then. 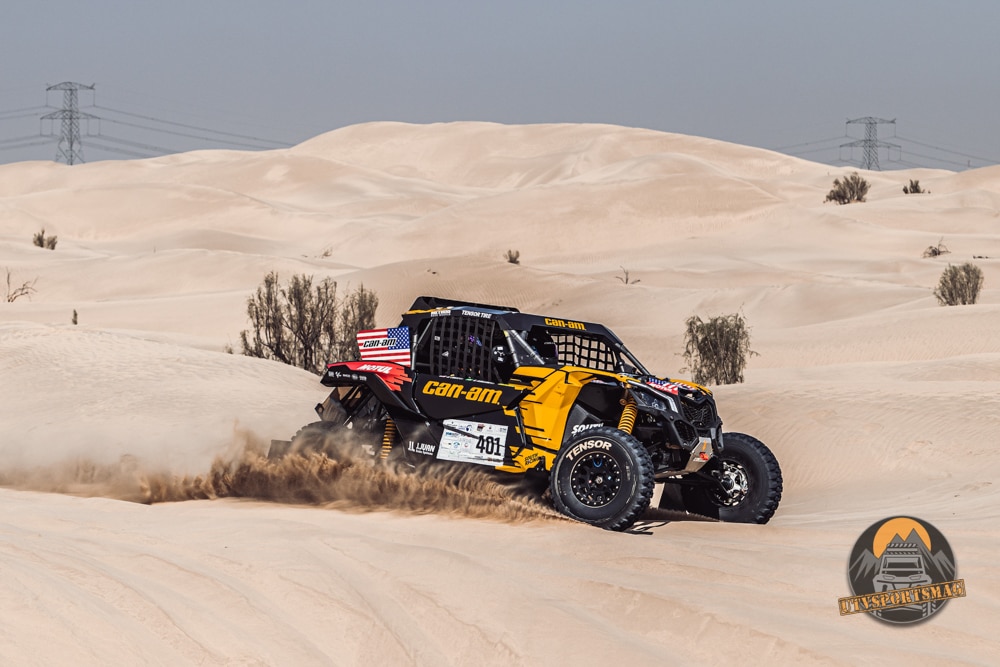 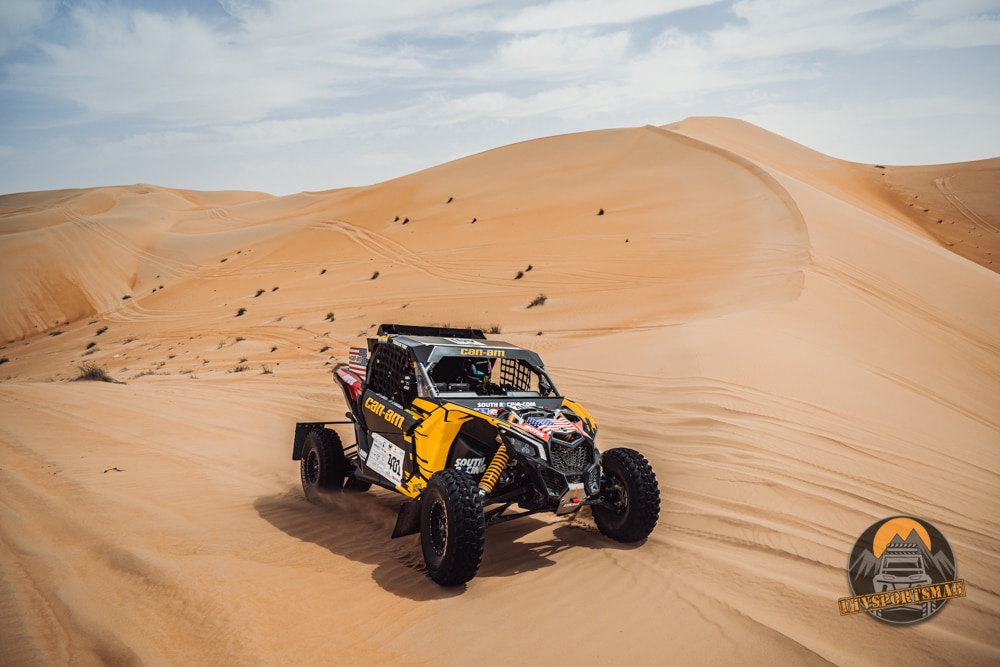 Q: Have you considered switching to T3 or T1?

A: T3 is definitely looking good right now, but when it comes down to it, Can-Am and sponsors put me where they want me to be, and as far as they want, it’s T4. Right now I’m really happy in my Can-Am. If they want me to race in T3 I’ll go out there and fight with them. That’s really up to them. In the future,as things progress, maybe I’d like to get into a T1, because I’ve got trophy truck experience and faster car experience. But right now, I’m good where I am.

A: My first Silk Way Rally was pretty rough. It was a 10-day race and I crashed on the first day—really hard, one of my worst crashes ever. We ripped a wheel off the side of the car; we then drove on three wheels on the highway in Russia, which was terrifying. It was a tree stump hidden in grass; I never saw it, I was going to pass a guy who wasn’t pulling over when I pressed the signal a hundred times, so I finally tried to go around in the grass, and I rolled around 14 times. I knocked my head a little bit but nothing too bad. We started racing again and made it back up to second place over eight days or so. And second-to-last day I ended up crashing again. That was the worst. And Qatar in 2020 before COVID … I was second behind Nasser Al Attiyah in overall, and third was Yazeed Al Rajhi. We were going over a dune and he ran into the back of me and destroyed my car, so we didn’t finish. That was a bad one for sure. 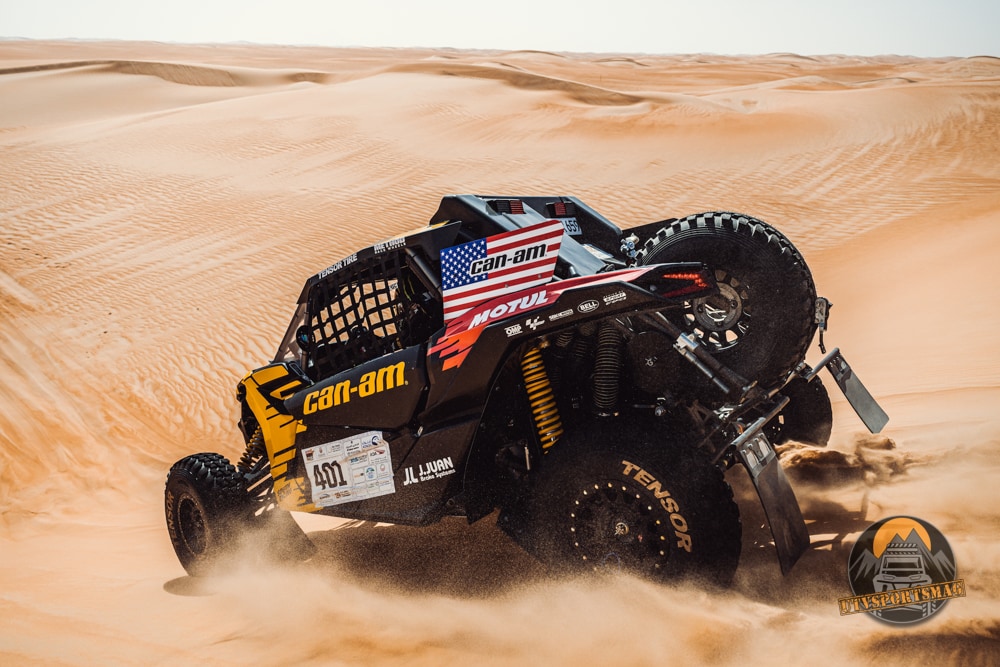 Q: What was your most rewarding race so far?

A: Dakar this year—that was a hard one, with narrow gaps between participants. A long race, and coming so close on the last day was cool. We were thinking about that small gap every second. 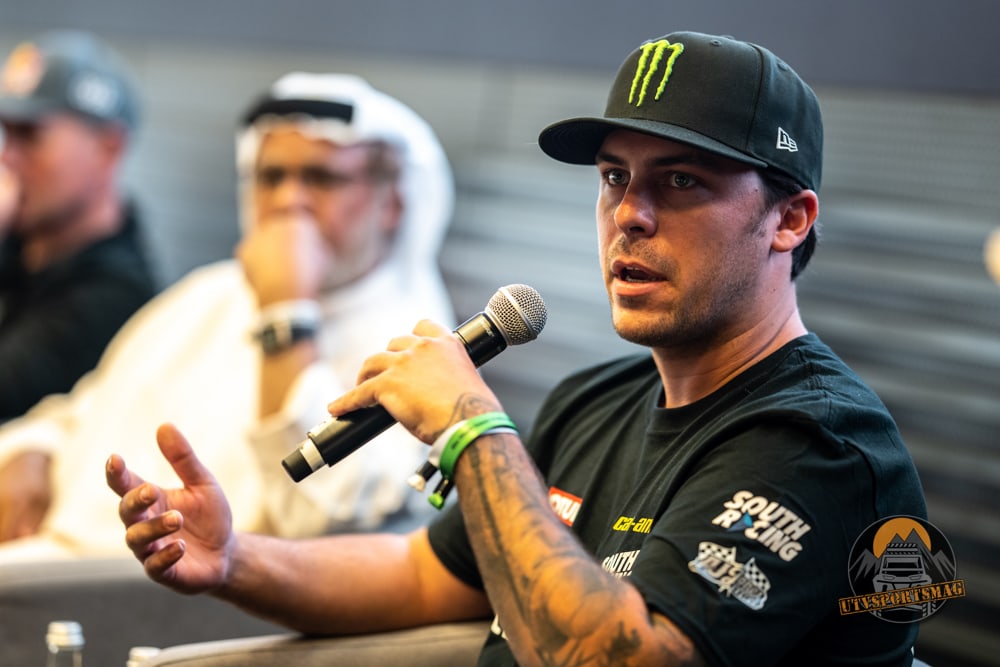 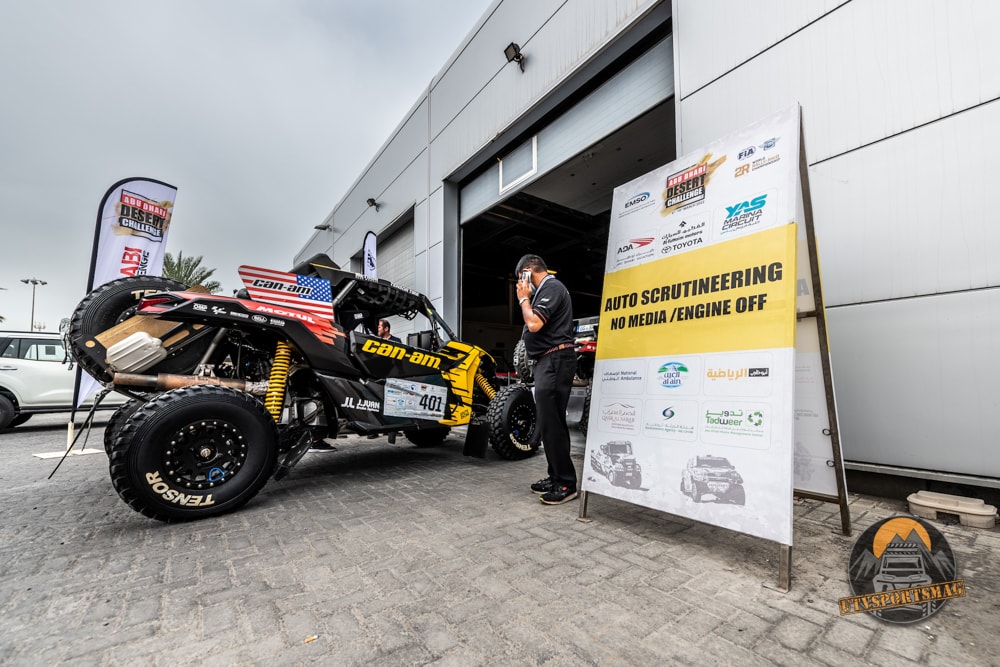 Q: Are you working with any sport psychologists to deal with all that racing stress?

A: My sport psychologist is my navigator. He’s the best. I may get angry or emotional about anything, and he’s very calm, very level-headed. He usually tells me to think about things from different angles, he helps me quite a bit with all that stuff. If I tend to get a little crazy sometimes when we’re racing and things aren’t going exactly right, he can really calm me down. This race, when our car broke down on Stage 1, by the time our sweep team got there, I was really chilled out—but at first I stressed out, because I wanted to win this race again. That’s another thing about winning races and doing well, and winning almost everything during the year. There’s an expectation that you can and you are going to repeat the win. 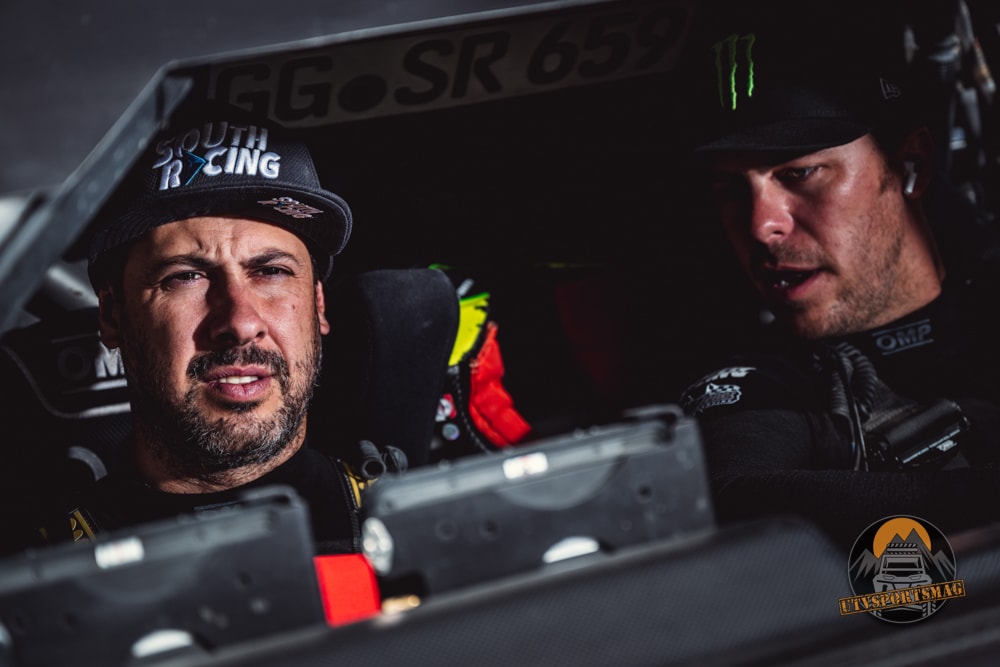 Q: Do you get a lot of support from social media, a lot of messages to reply to?

A: A lot of people are really happy back home in America, really proud that an American is doing really well here in rally. Historically, we haven’t really done so well. It’s far—I understand why they don’t really want to do it because it’s hard to keep coming here and do it, with travel and jet lag and everything like that. And it’s so different from how we race in America, the format of the races.  A lot of people hit me up and send me nice messages. A lot of people also hit you up and say mean things. I read them all, I don’t respond to the mean ones.

Q: Speaking about Americans, you are the second American to win a Dakar—are you familiar with Ricky Brabec?

A: Yeah, we go up to the dunes and test with Ricky Brabec, we are really good friends … We do the same roadbook, and I try to chase him, and then we’ll switch, and then we do different roadbooks and meet up. We can spend a week in the desert doing roadbooks and training. It’s a good time, we get on really well and he’s obviously the best at what we are doing out here. Being around those guys and training with them makes me better. And it’s fun. 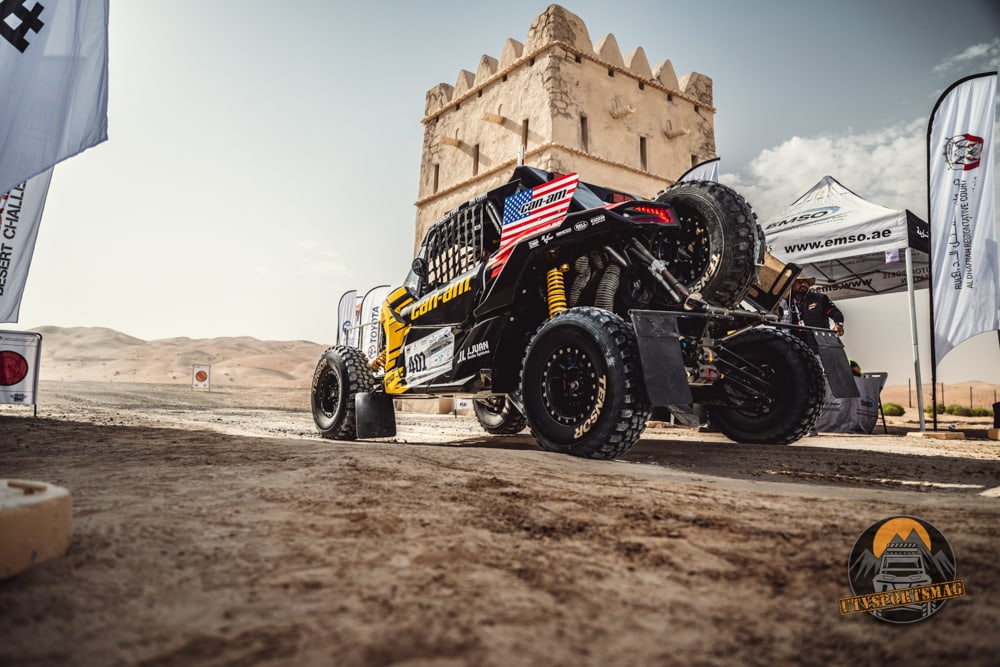 Q: Tell us about your childhood. Having a trophy truck racer as your father, did you start racing early?

A: I was at the races every once in a while, the ones in America usually, never really down in Mexico. But yeah, I was interested in it and I liked it, but never really super into it … I was into playing sports and doing other things … The first time I drove a race car was in 2017-18. I got my driving license when I was 16, was driving to school. And then after 5-6 more years I started racing. I really liked to drive, I still like to take my pickup truck out in the desert, meet my friends there, going to do doughnuts.

To wrap up, Jones said he was going to push at the final stage, as he had nothing to lose—and he did, winning it. With fourth place in Abu Dhabi because of the mechanical failure, he still maintains overall lead in the W2RC standings. After discussing the championships and standings, with the microphone off, we went into racing stories. Unfortunately, lots of cool stories remained off the record, with Jones talking about racing trucks in the U.S. with Toby Price and Nasser al Attiyah and showing Nasser truck driving tips and so on. This means, a lot to follow up on—we’ll check up with Dakar champ later in the year again!

Anastasia Leniova is a Belarusian motorcycle ADV rider who recently traded solo off-road travels for enduro and rallies. After traveling around the Black, Caspian and Baltic Seas on a Honda Transalp and then a KTM 690 Enduro R, she became the only woman (so far) to complete the Silk Way Rally in Malle Moto. Anastasia dreams of becoming the first Belarusian to complete the Dakar rally on a motorcycle and is searching for partners or a team to join. Follow her adventures on Instagram @leniova33.